Any game that allows you to play as a triceratops who can drift around the apocalyptic streets of London is a winner in my book – and Cruis’n Blast delivers that fantasy like nothing else has before. Nestled away on the Nintendo Switch eShop, this is a loud, explosive, and utterly nonsensical racer that fully embraces its own excess, and results in an experience that I can fittingly describe as Burnout on a drug-fuelled bender. It’s Superhans in gamer form, and he’s huffed up a bunch of coke and ran to Windsor. Beautiful stuff.

I’ve always had a hard time with racing games. Simulators are often too complicated for me, since I have no interest in learning the intricacies of handling a real vehicle and how weather conditions, track designs, and other such conditions determine my eventual victory. Skill obviously comes into the equation, but time and time again I’ve tried to crack Gran Turismo and Forza Motorsport only to walk away wishing for something more approachable.

This mindset means that titles like Burnout, Blur, Split Second, and even Forza Horizon are right up my alley. None of these games assume prior knowledge of motorsport or expect you to spend hours mastering the control of a single car to make even the slightest hint of progress. I could obviously switch on all of the assists and breeze through, but that takes away all of the challenge I would have otherwise welcomed. I’d rather have a shiny selection of cars to choose from alongside a generous suite of events that I can tackle however I like. 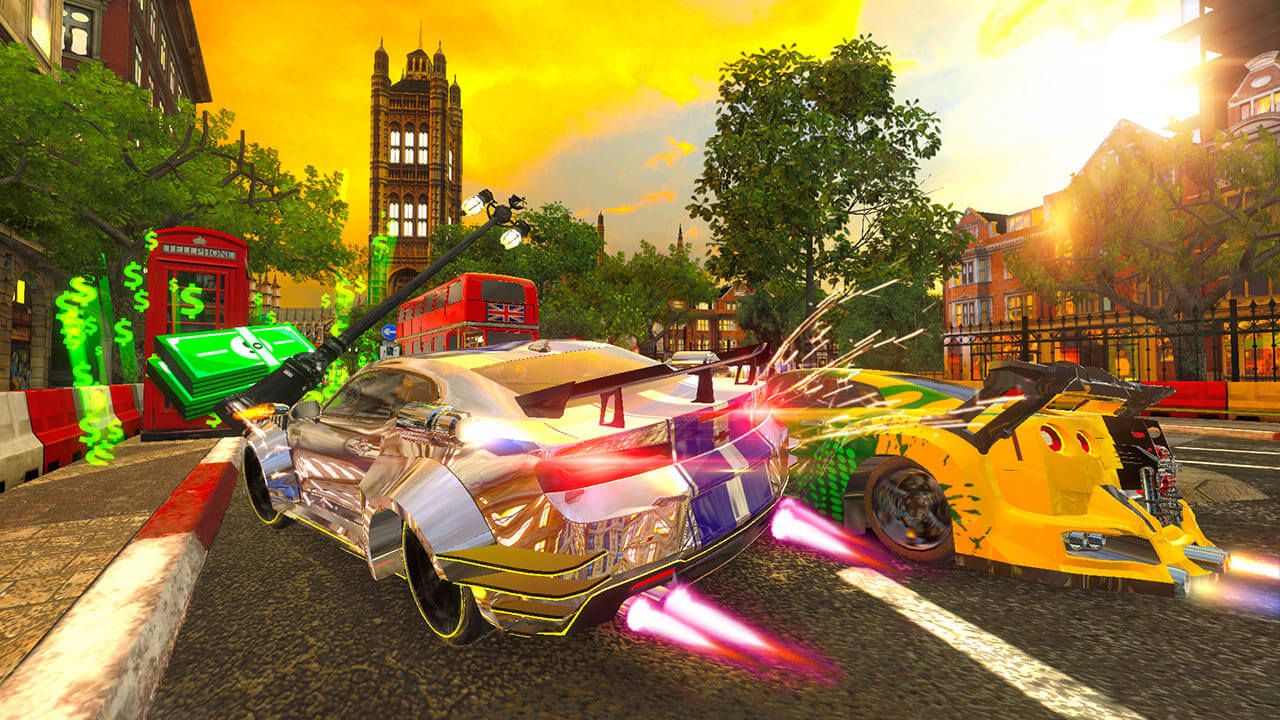 Freedom alleviates the frustration, or there’s never any to be found because games like Burnout and Blur understand that racing can and should be for everyone, regardless of skill level or familiarity with a genre that can far too happily leave newcomers behind. Cruis’n Blast is the perfect combination of these two factors, offering a simplistic racer with so much personality, so much variety, and so much unexpected brilliance that I can help but grin every time I find myself on the starting line. I’ll start with the ludicrous soundtrack.

The main menu theme is awful, a sharp voice bellowing out the words ‘cruisinnnnnn’ with a pitch that I can only describe as apocalyptic. It’s knowingly terrible, gelling beautifully with the game’s garish aesthetic and immovable dedication to cheese. You’re pulled into a false sense of security with the opening tournament, which is relatively grounded when compared to what’s to come. Sprawling tracks are filled with wild animals running across the roads and you fall through crumbling holes in the ground as the world around you feels larger than it has any right to. This game feels massive, and I’m still not entirely sure why or how. 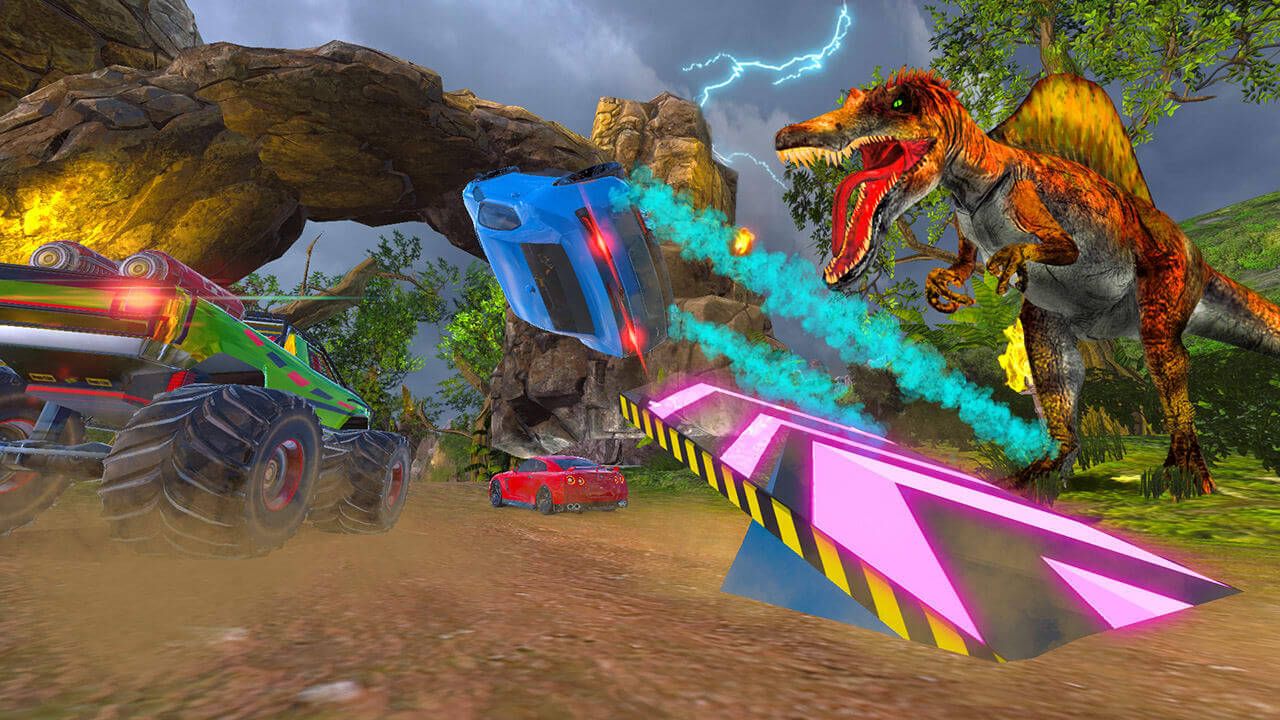 By aiming for visual minimalism at a fundamental level Cruis’n Blast is able to fill the scene with so many absurd objects, creatures, and moments that not a single moment feels boring – it’s a blast (sorry) from start to finish. This isn’t a game that looks “good” on a traditional level, but it’s awash with so much personality and batshit ideas that it all just works. Later tournaments have you racing across familiar locales that are now dominated by attack choppers, dinosaurs, and alien spaceships that tear each track to pieces as you soar through them, the speed so fast that mastering time trials and earning gold trophies becomes immediately infectious. Gosh it’s so good you don’t know the half of it.

Vehicles start off simple with the usual supercars and motorcycles you’ve come to expect from racers like this, but it quickly takes a turn into the outlandish. Firetrucks I can vibe with and understand their place in the roster, but you soon start unlocking helicopters, dinosaurs, unicorns and all manner of bizarre creations that operate just like cars do. They drift, ram into opposing drivers, and exhibit all of the same growling engine sounds. It’s so out of place that it’s hilarious, a dinosaur drifting around the streets of England’s capital as the London Eye and wayward underground trains begin tearing through traffic and bringing the city to its knees. None of that matters though, because I have a sick scaly ride with eyes set on the finish line. 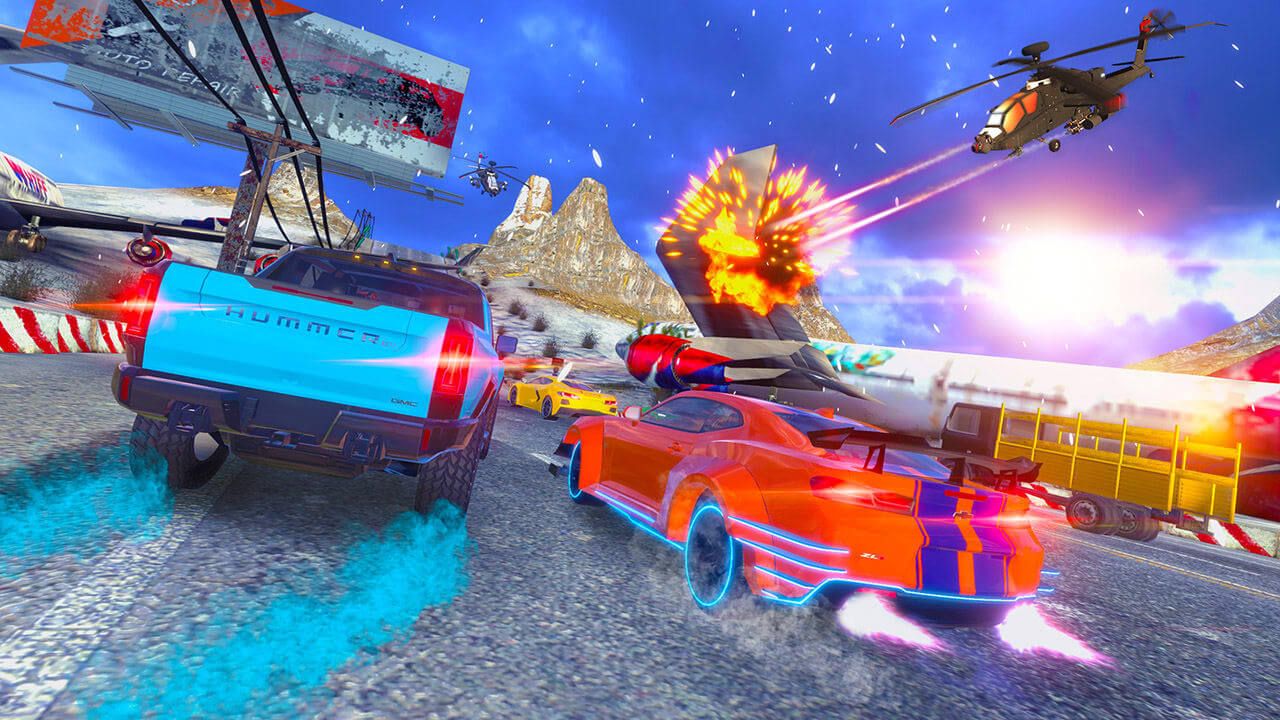 It’s a shame that Cruis’n Blast seems to have flown under the radar given its Switch exclusivity and hefty price tag. I grabbed it in a recent sale and was transfixed in mere moments, the game planting itself on my GOTY list and refusing to leave. Few games manage to achieve such a thing, and even fewer racing games have ever managed to capture my attention like this. If you’re after a racer that isn’t afraid to be silly and poke endless amounts of fun at itself, this isn’t to be missed.