Although it’s widely known that the dystopian Night City is ruled by megacorporations, Cyberpunk 2077: Trauma Team #1 — a new comic from Dark Horse — offers us an insight into how deeply ingrained that structure is in society at large. While the eponymous Trauma Team offers the fastest and most effective paramedic service in the entire city, they’re also privately owned — premium services charge premium prices.

Trauma Team #1 tells the story of Nadia, an assistant EMT working on one of Trauma Team International’s elite rescue squads. The excellent art style immediately grabs you, marrying bright colors to overwhelmingly sensory environmental design and striking character portraits. It couples perfectly with a riveting narrative that takes unexpected turns as if it was lost on a rural backroad in the Badlands.

The story begins on the neon-drenched streets of Night City, where bright lights illuminate the blood and bullets that litter the pavement. Each gorgeous panel is stylishly drawn and packed to the brim with subtext. Suddenly, that subtext is shattered as two men emerge from cover with assault rifles and attempt to return fire to an unseen assailant. They’re quickly and easily dispatched. Moments later, a heavily armored AV-4 hovercraft touches down at the scene of the crime, allowing the specialists from Trauma Team International to get to work.

“Everyone’s resentful of how much money they make,” says Nadia, confessing her feelings about running a mission in the nouveau-riche boulevards of Westbrook. “Doesn’t change anything.” Her words are completely detached from the carnage around her, but we quickly learn why.

You see, Nadia isn’t actually speaking to anybody on the ground. She’s hooked up to a cybernetic apparatus that allows her to run a complex and authentic simulation of a high-intensity job. But this isn’t just any simulation — it’s a reconstruction of a job she was previously on, where every single person on the Trauma Team squad died except her.

The panel design here is remarkable. Although the panels flit from past to present, the speech balloons exist in both timelines — in the moment, they are a standard white bubble, highlighting the conversations that are currently happening on the ground. But outside of that, Nadia is being assessed, and the exchanges between her and her superior are denoted by yellow and blue text boxes, which are also featured in the scenes depicting her technically successful but ultimately costly rescue attempt.

It’s an effective way to create tension — each panel brilliantly juxtaposes the fervor of being in the middle of a cosmopolitan battlefield, while the relentless interrogation of Nadia is in an assessment room far away from it all. It quickly becomes clear that while Trauma Team International outwardly responds to trauma in Night City, said trauma is absorbed by its employees. Nadia’s assessment isn’t an empathetic one designed to help her come to terms with losing her friends and colleagues — it’s a brutal methodology used to force her into treating her entire existence as a job, and to pretend that her last mission was a success. To pretend her colleagues didn’t all die.

When asked why she signed up, Nadia says she knew it was a job, but sometimes it felt like it could be something more. In the capitalist eyes of TTI, that mentality is unacceptable. They are providing a service in exchange for profits — the lives of the people they save don’t matter. What matters is that their track record remains flawless so that next year’s premiums can be beefed up to $200 a minute. This gives us a remarkably apt insight into the world of Cyberpunk 2077 — even the good guys work for the baddies.

Having been recalibrated into thinking that she did something good “for the company” when she saved the client despite losing her friends, Nadia ventures into the maelstrom once more, this time taking on a job in Pacifica.

“If anyone gets in our way, waste them,” says her colleague after touching down outside their target’s location. “Do no harm” isn’t in this team’s vocabulary, never mind its code of ethics. Even the Trauma Team uniforms seem militant — assault rifles, full body armor with a helmet covering their entire face, their codename etched into the side like a name on somebody’s dog tags. They look more like a spec ops unit than a medic squad.

After bursting through the doors, Nadia’s lead EMT, Stratter, is hit. He calls out for some ‘dorph: a stimulant designed to nullify the pain and allow him to keep pushing onward — this provides us with yet another glimpse of how people respond to pain and trauma in the uncaring streets of Night City. They modify themselves and move on from it. Pain is a thing of the flesh, and flesh is weak.

Once Stratter recovers, Nadia and the team blitz through the building, unleashing a barrage of bullets against the gang laying down heavy fire on them. Always the professional, Nadia makes it to her destination, where her client is waiting impatiently.

“Took you guys long enough,” he says, slightly stuttering. “What the hell kept you?” 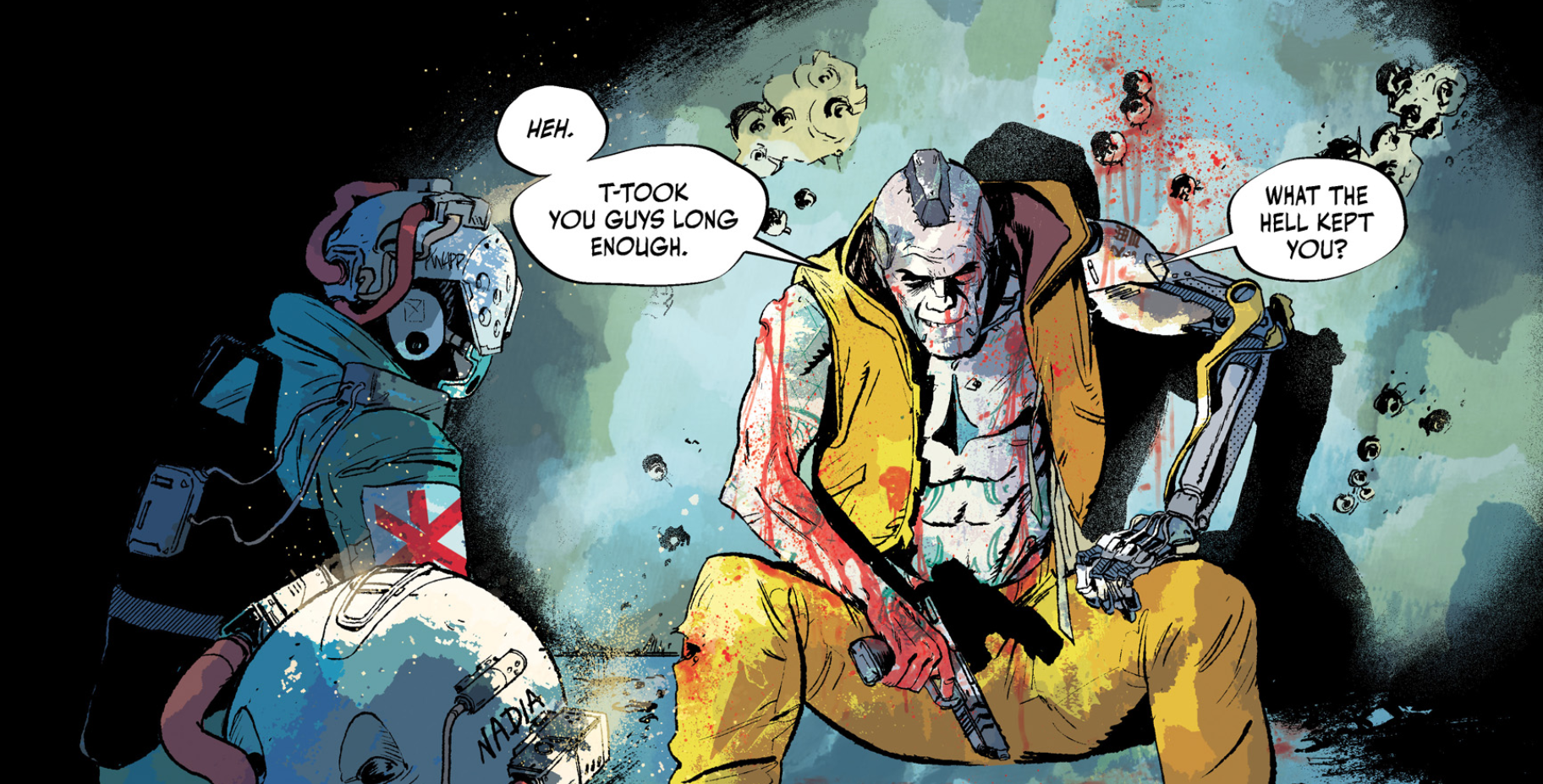 The last page is expertly crafted, because it conveys an entire spectrum of emotion with precious few panels. The last frame in the strip shows Nadia taking a closer look at her client’s strangely familiar face, before masterfully conveying her absolute horror as she matches it to a memory.

This is the man who killed her teammates — killed her friends. But she’s got work to do, so what’s next? Does she finish the job? Or does she finally treat it as something more?

Ultimately, Trauma Team #1 is a defeating and harrowing read. It sees a character lose everything dear to her before being manipulated into risking her life yet again — and for what? Her ambition is never described in full — all we know is that she joined the medic team with dreams of achieving something more, but the corporate overlords at TTI don’t want that, and will cut her off like a dead branch sooner than offer her rehabilitation or support.

I’m rooting for Nadia in the next issue of the series, but it’s difficult to imagine her prevailing in a world as desperately bleak as this. But, given that V also has to build his or her own life amid the crumbling humanity of Night City in Cyberpunk 2077, there’s a faint glimmer of hope flickering in the background — maybe Nadia will escape her corporate captors yet.