Releasing just under a decade ago, the original Darksiders title was a supremely enjoyable hack and slash adventure that borrowed elements from legendary franchises like Devil May Cry and The Legend of Zelda, while weaving a new and entertaining—if not slightly convoluted—narrative about a war between the forces of Heaven and Hell.

Ten years and three games later, Darksiders Genesis retains much of what made the eponymous game great while introducing a series-first co-op focus and locking the camera to an isometric perspective. It never quite excels beyond its budget spin-off nature, but it’s a captivating campaign across a war-torn hellscape that’s sure to satisfy fans of the series. 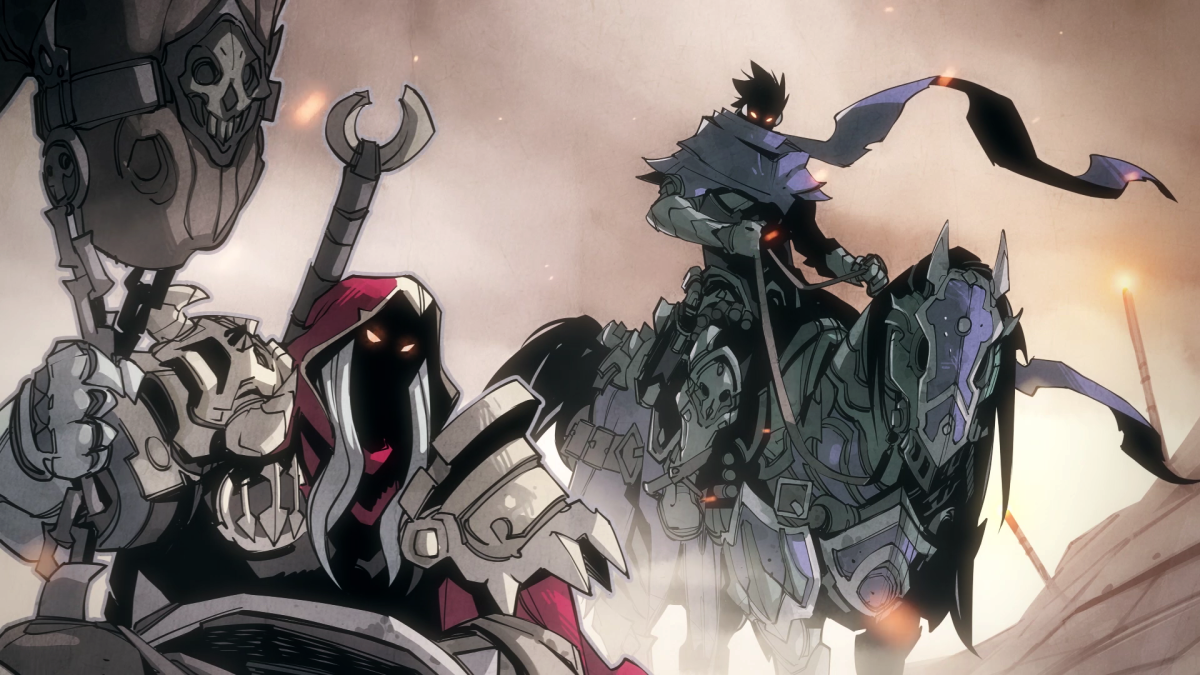 The Book Of Genesis

The game features War, the protagonist of the first game, and Strife, a newly-playable horseman, as the two leads who make their way through a series of large and varied open stages on a quest to… well, kill a bunch of demons. The plot never gets much more complicated than that. 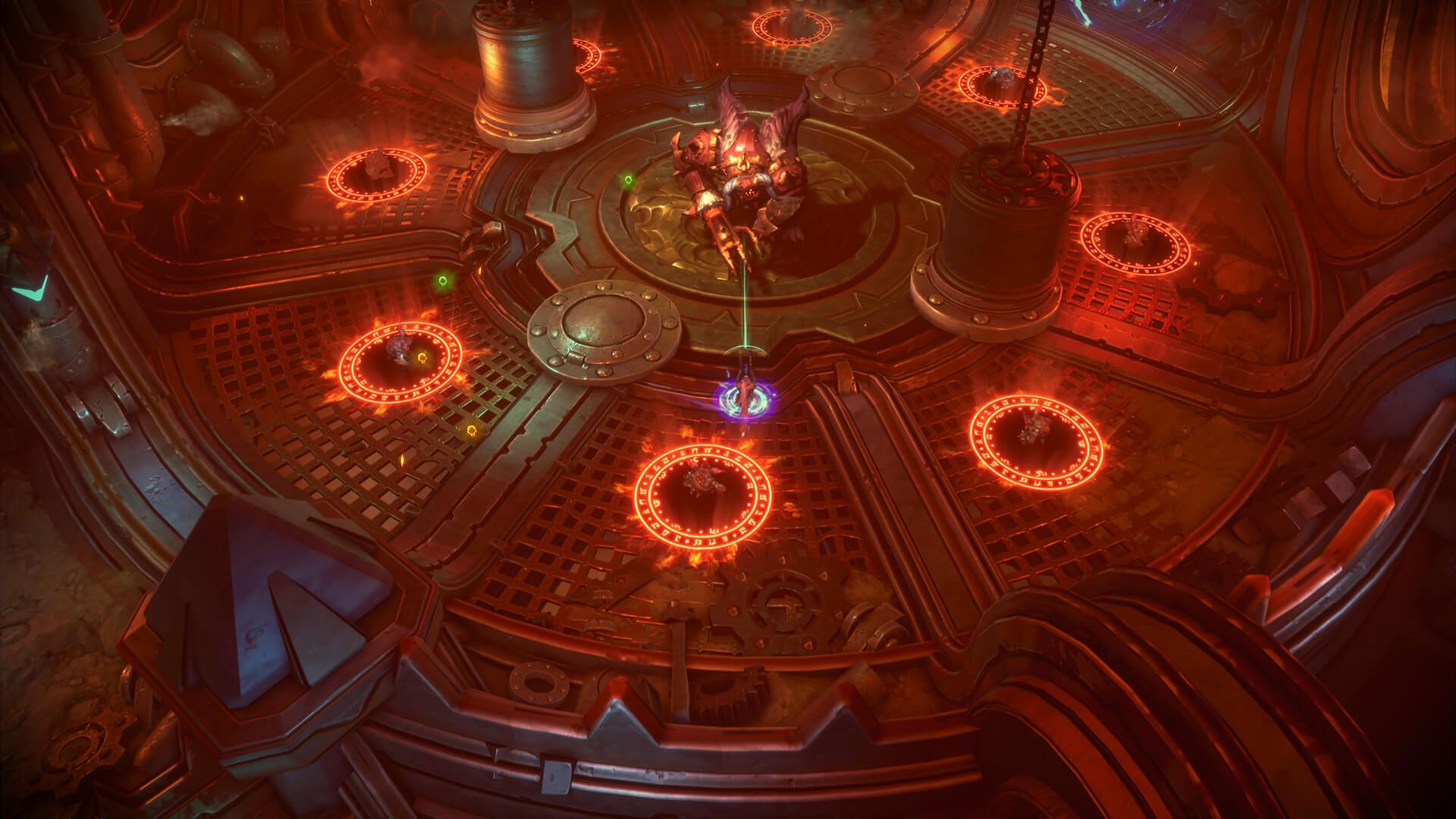 In fact, those who’ve played any of the three preceding Darksiders games will know how bogged-down the story can feel at times, and Genesis starts things off on a bit of a strange note in that regard. The Charred Council, a divine body of watchmen invested in maintaining the balance between good and evil, order War and Strife, two of the four horsemen of the apocalypse, to drive the invading Nephilhim forces out of Eden, which is either a post-apocalyptic version of Earth or literal Hell itself. At least, that’s what I could gather from the opening cutscene with my limited knowledge of Darksiders lore. The game absolutely expects players to be privy to the events of the three proceeding games, so head over to Wikipedia and study up beforehand.

Though the story never really evolves beyond a thin narrative used to string locations and enemy bosses together, the gameplay is where Darksiders Genesis really shines. At the outset, the isometric perspective, map layout, and move sets may give a Diablo-esque impression, but an ARPG, this is not. In fact, it’s surprisingly faithful to the gameplay seen in the first two Darksiders games, the only major difference being the lack of an over-the-shoulder perspective.

Send Them Back To Hell

The moves and actions available to the two horsemen are varied and dynamic, and they each have a distinctive playstyle. War is a close-quarters combatant who can pull enemies toward him, block, and use multiple AOE special moves, while strife is a ranged fighter who prioritizes the use of dual-wield pistols and can use a variety of different ammo types. The two can also summon and dismount their underworldly horse mounts on a whim, which drastically increases movement speed while simplifying the control scheme and adding yet another level of badassery to an already devilishly charming duo. 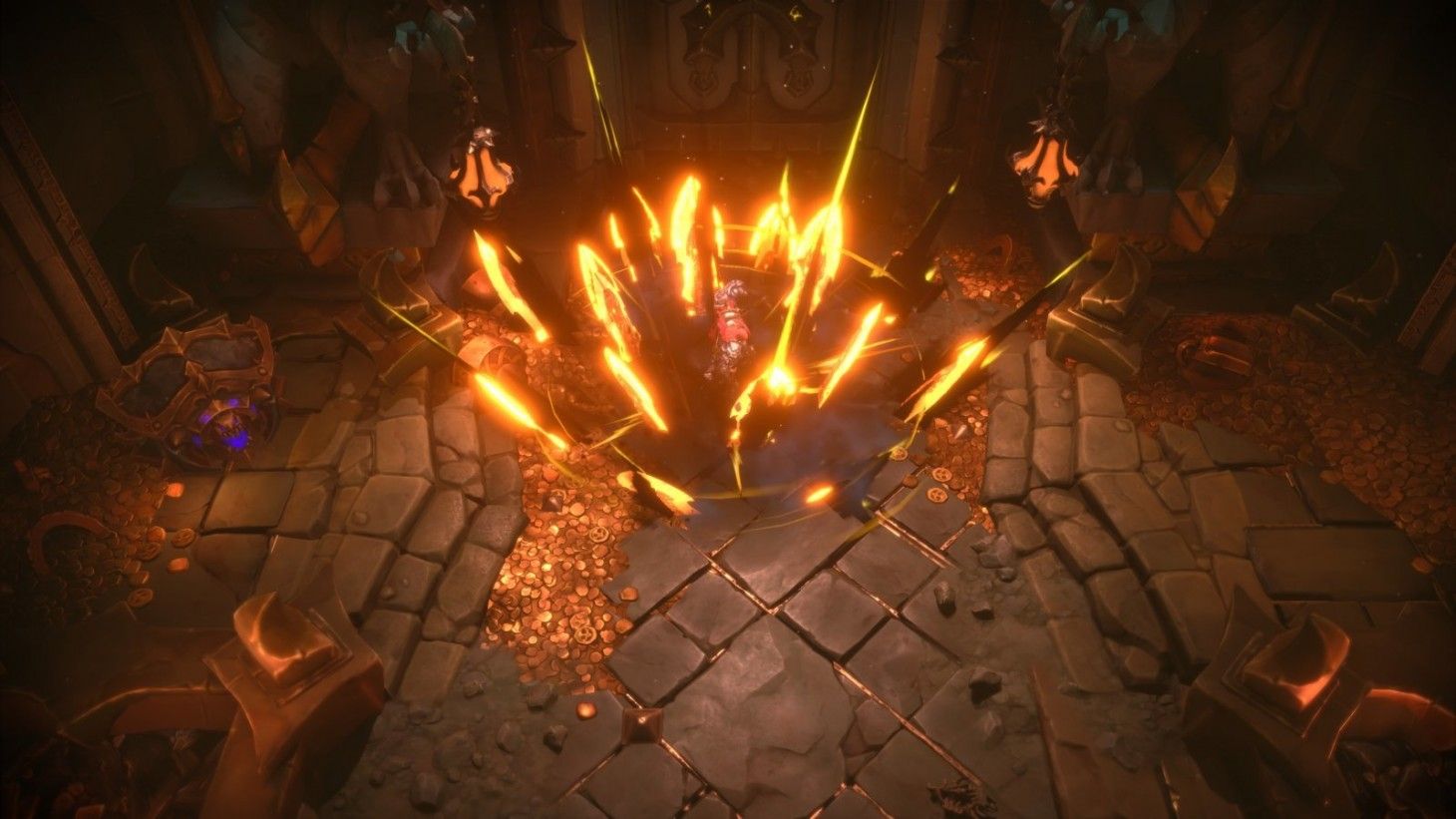 In single-player, the two can be swapped in and out at any time, allowing players to match the gameplay style demanded by each new situation. Players can switch between War and Strife in co-op, as well, although both players have to sign-off on the swap, making it slightly unwieldy to do on the fly. That said, the game works extremely well in split-screen, and, though the game was clearly designed to be played through solo, there’s nothing quite like tearing through a hoard of demons alongside a buddy.

The two characters can be upgraded with the use of creature cores, which are items dropped by enemies and can be used to buff attack, wrath, and healing abilities. Additionally, placing cores of a certain type into slots of a corresponding type warrants an additional buff and rewards those who take the time to strategies their upgrade paths. There are also minor and major cores, which come from regular and boss or mini-boss enemies, respectively. 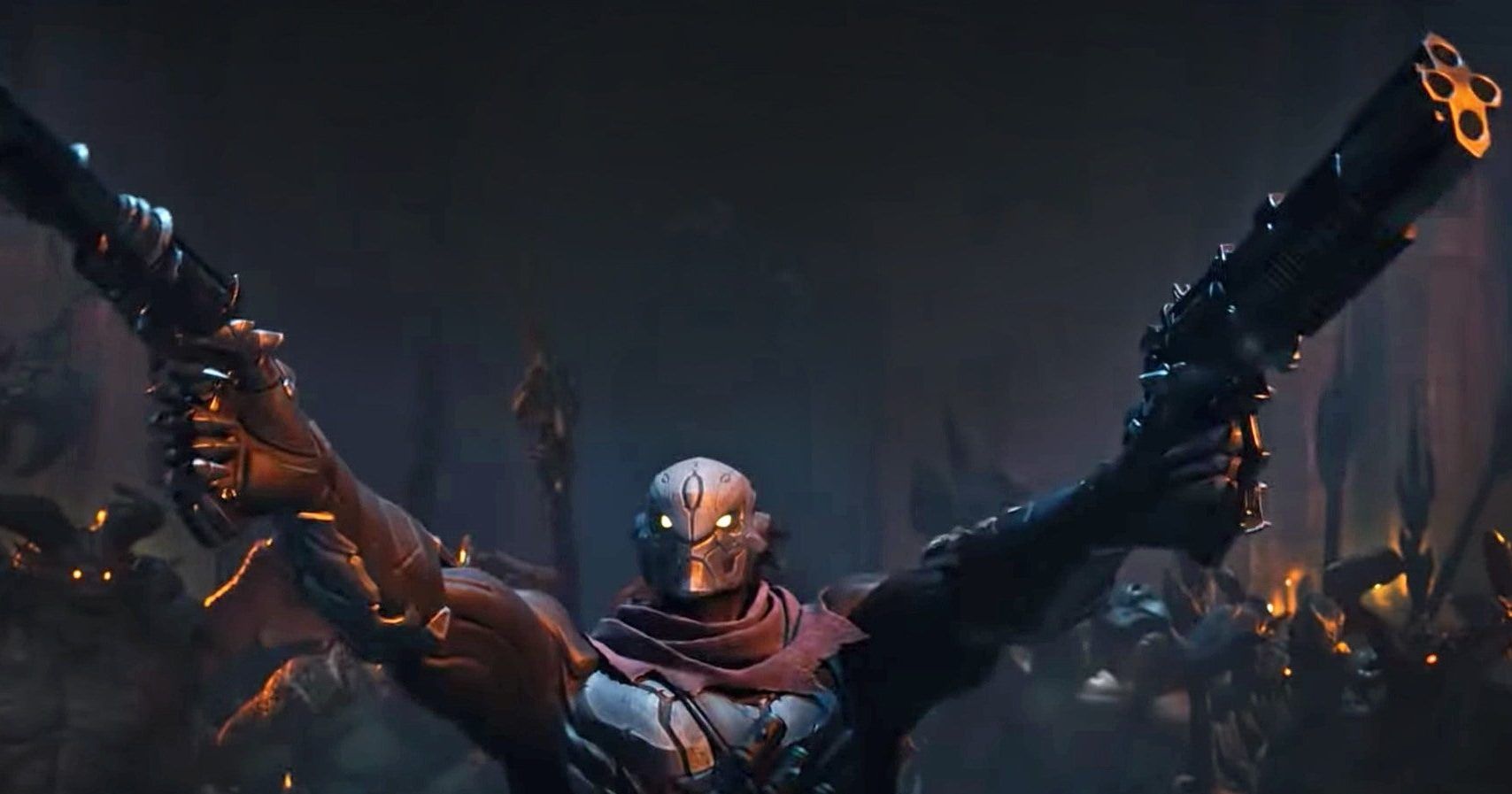 Navigating the menus and figuring out what goes where can be a bit difficult at first, as can the semi-complicated control scheme, but players shouldn’t find the learning curve insurmountable, especially if they have previous experience with the genre.

The visuals are also pretty stunning and a definite cut above what most would expect from a budget title. Publisher THQ Nordic handed development duties over to Airship Syndicate, a team only recognized for the little-known RPG Battle Chasers: Nightwar, but they certainly managed to deliver a colorful, vibrant experience that’s evocative of a triple-A title without relying on triple-A resources. 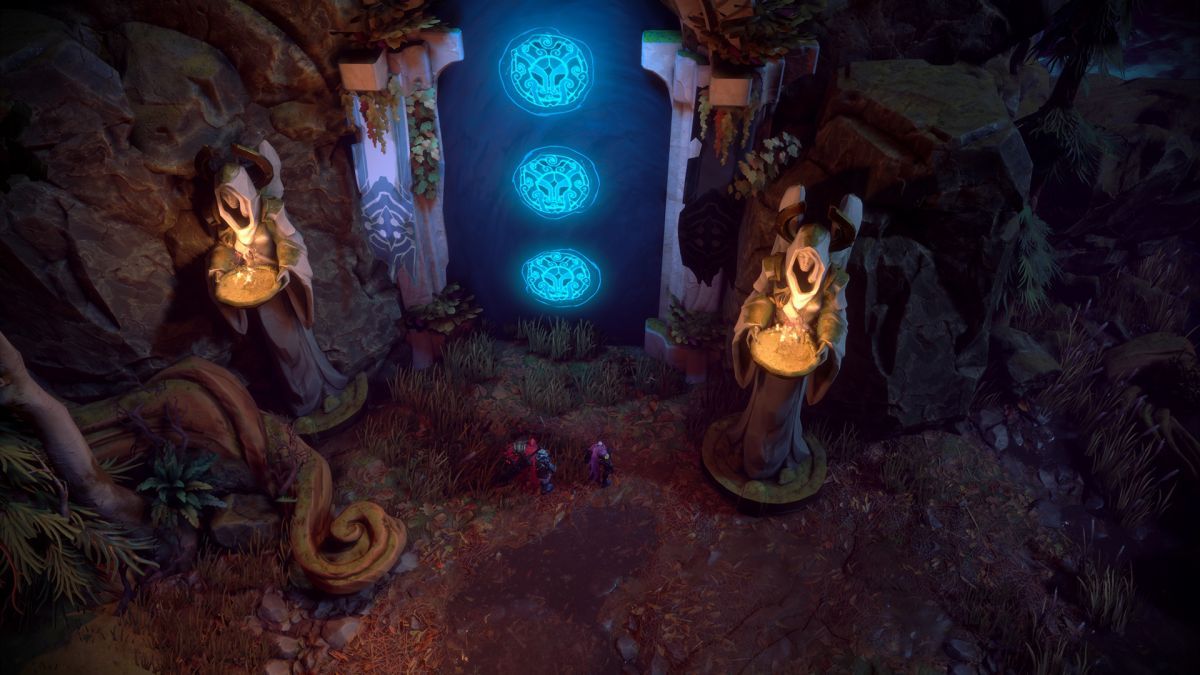 While isometric camera angles definitely help to mask less detailed texture or underwhelming character animations, everything seems smooth and well-crafted. The varied environments and brilliant visual design makes Genesis a standout, even among a series lauded for its stylistic appeal.

Of course, as with any game, there are a few drawbacks and caveats, the most significant being the control scheme. The game advises the use of a controller, but, even so, some of the moves are a bit difficult to pull off in the heat of battle. Switching between ammo types as wrath or relying on a wheel to switch through different abilities or attacks can be cumbersome at times. Player mileage will vary, though, depending on genre familiarity. 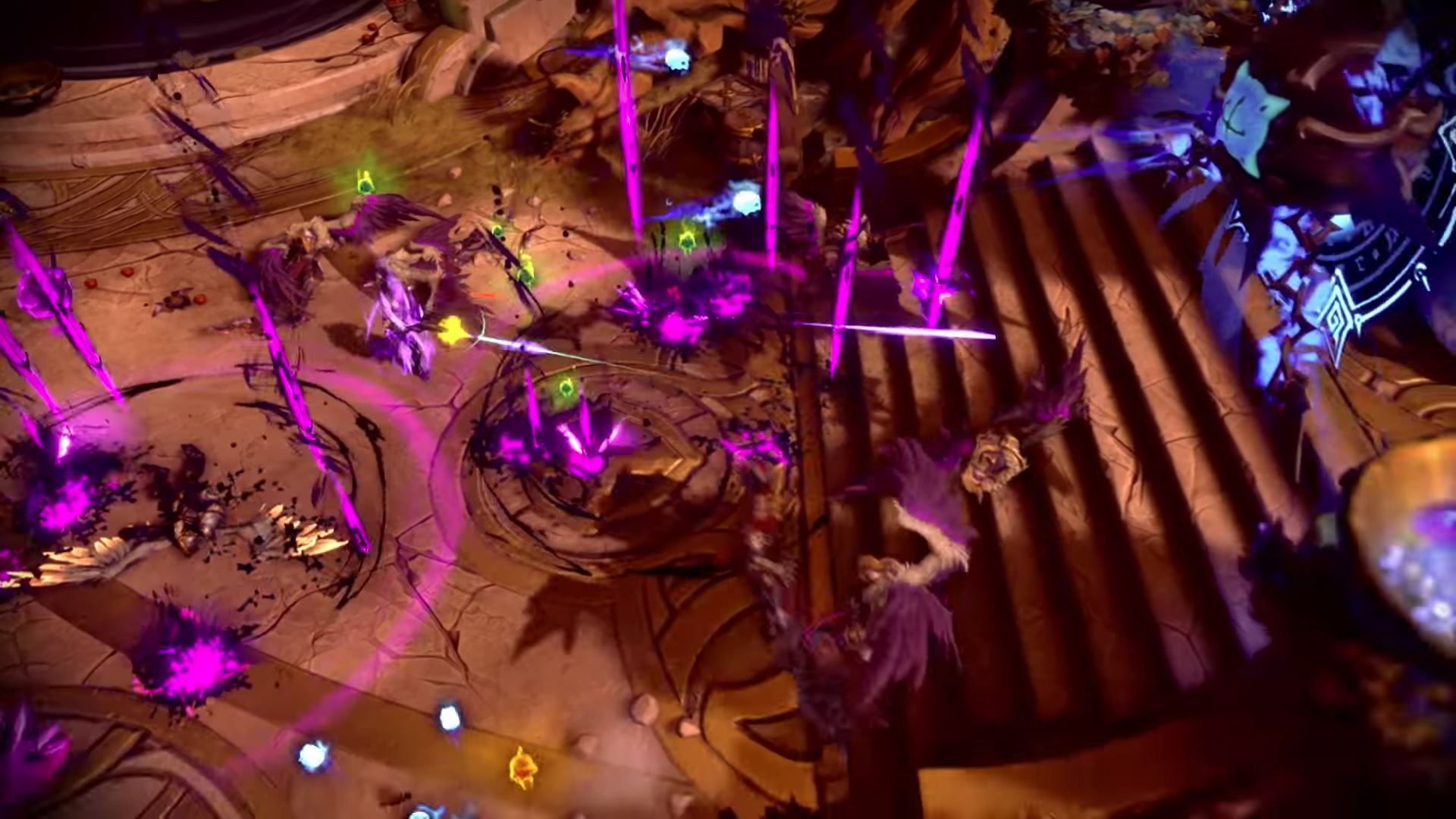 The game also places a fairly heavy emphasis on platforming, which doesn’t always work with an isometric camera. The inability to change camera angles makes certain sections more guesswork than tests of skill, and players will doubtlessly experience more than a few deaths thanks to their character opting to jump to their death rather than grab on to an adjacent ledge. There’s also a fairly pervasive issue which sees characters getting stuck in level geometry, which, though never totally game-breaking, was nonetheless incredibly annoying, particularly during certain boss fights.

Is Darksiders Still Worth Your Time?

The Darksiders series has been through quite a lot over the course of four games. From a Zelda clone to a God of War clone to a Dark Souls clone, it could never seemingly settle on one specific genre or style of gameplay. That said, though Genesis doesn’t exactly introduce anything totally new to the franchise, it’s an entertaining experience that stays true to the feel and tone of the series despite making a few budgetary concessions.