Deadliest Catch: The Game Review: What A Load Of Crab

I continue to be surprised by how prolific the fishing game genre is. Just when I think that there couldn’t possibly be a reason for a developer to make yet another fishing adventure, three more pop up to prove me wrong.  There appears to be a very particular audience that’s totally into digital angling. So it makes sense for the folks over at the Discovery Channel to attempt to tap into this specialized market by creating a game based around one of their more popular reality programs: Deadliest Catch.

It does offer something new as out of the previous fishing titles I’ve played; none have had me pursue crabs out on dangerous open water. It also gives viewers the chance to be the captain of their own crab-fishing vessel like the characters on the hit series. Unfortunately, fans of the show may be disappointed, as while Deadliest Catch: The Game does a good job of meticulously detailing the day-to-day operations of owning your own ship, it offers nowhere near the same level of sea-faring excitement. 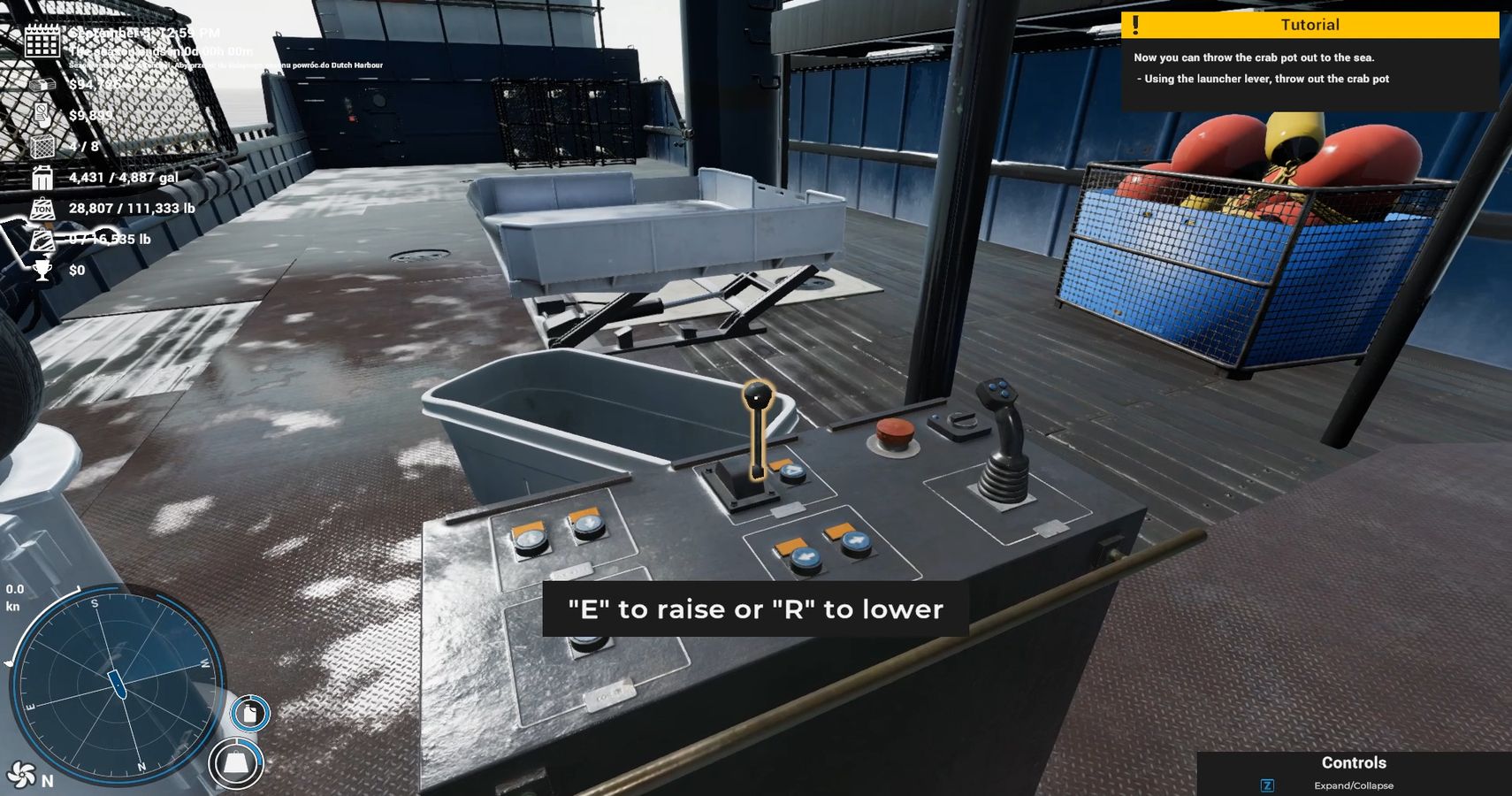 If you’re unfamiliar with Deadliest Catch, it’s a show about crab-fishermen who sail the Bering Sea in search of delicious crustaceans to scoop up for profit. A typical episode consists of a lot of rain, snow, massive waves, people yelling at each other, and huge moments that happen conveniently right before a commercial break. It’s precisely what you would expect out of a reality show on the Discovery Channel. It even has Dirty Jobs host Mike Rowe doing the narration. I’m surprised one of the Mythbusters hasn’t showed up to blow up a crab or something.

Deadliest Catch: The Game gives wannabe fishermen and fisherwomen a chance to run their own boat, and it does so in painstaking detail. You need to purchase supplies needed to catch crabs, refuel your boat, hire crewmen, and then there’s the complex process of actually fishing for crabs. That requires loading a crab pot – which is essentially a large jail cell for crabs – with bait and a buoy, then chucking it into the water, waiting for several in-game hours, and then unloading the haul. The player then needs to sort and closely inspect the crabs by size and gender as selling female crabs levies captains with a hefty fine. So that means you spend an unbelievable amount of time staring at the undercarriages of crabs. After you’re done all that, you sell your catch to a processing plant, purchase upgrades and more items, and then do the whole thing all over again.

As an educational tool, Deadliest Catch: The Game may hold a bit of value. I have almost no experience with the TV Show, so I had little to no idea how much work was put into catching these crusty critters. It seems like an expensive, difficult, incredibly cold, and physically demanding job that I sure as hell wouldn’t want to do. The fact that these fishermen put their lives on the line just to gather seafood for the various buffets at casinos and cruise ships around the world is both commendable and insane. 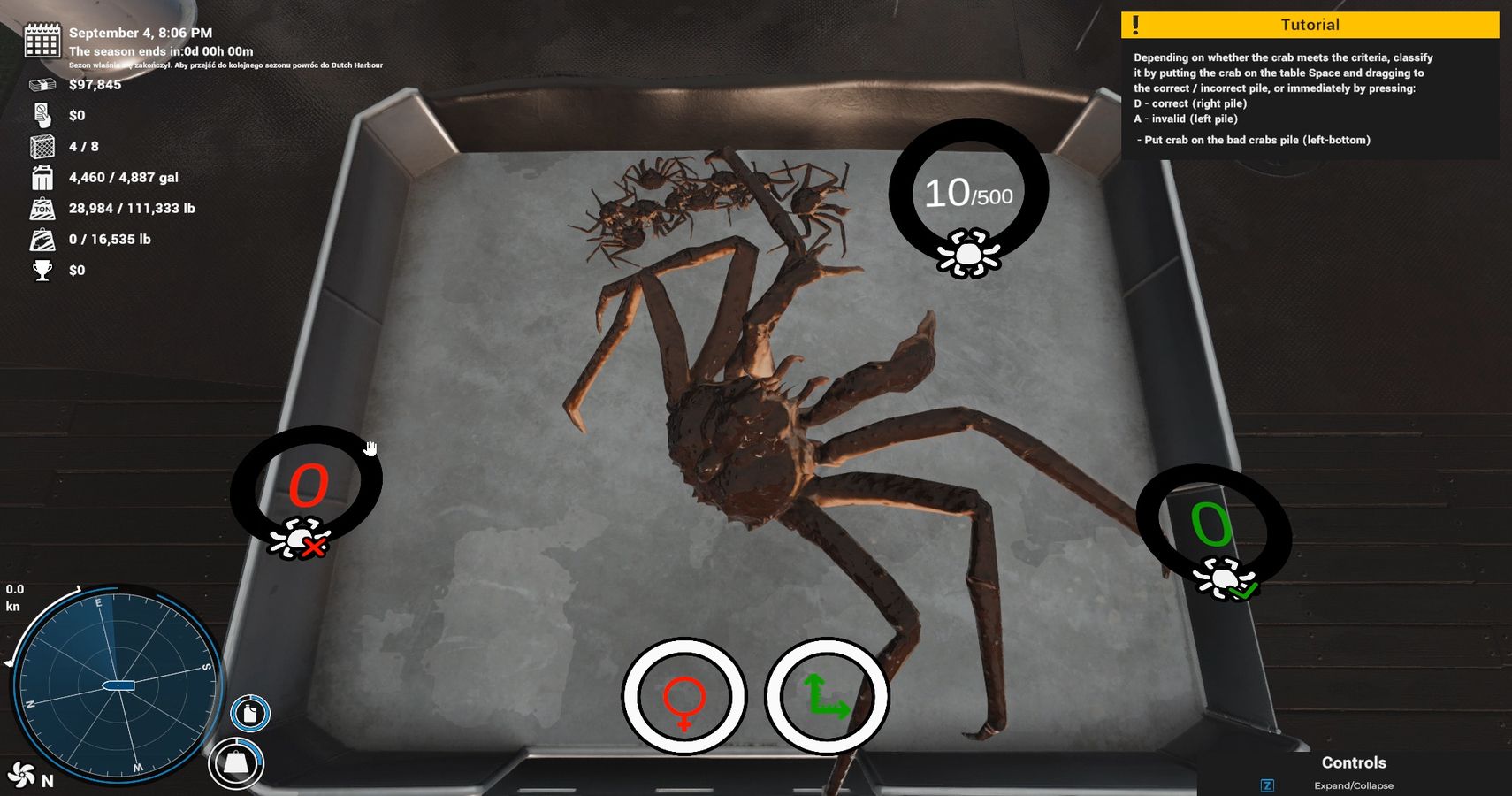 Aside from possible education purposes, the other great use of this game is as a way to persuade someone you know away from pursuing the life of a crab-fisherman as a career path. Because this game is boring as sin. Just about every aspect of Deadliest Catch: The Game is slow, dull, and surprisingly complicated.

Throwing out the crab pot requires a checklist of different steps that need to be completed in order. The boat you take control of has several buttons, levers, compartments, and resources to utilize and keep track of. Forgetting even one of these steps can lead to you losing items or an entire pot of crabs due to one little mistake. The big problem is that the whole process is so tedious that it’s pretty easy to lose interest in what you’re doing, as it becomes harder and harder to care. Having to grind bait blocks or grab crabs and flip them around to see what kind of junk they have doesn’t make for compelling gameplay. This game is almost too faithful to the show in its simulation of crab-fishing. While that may be nice for crab-fishing aficionados, anyone looking for fun will be sorely disappointed. 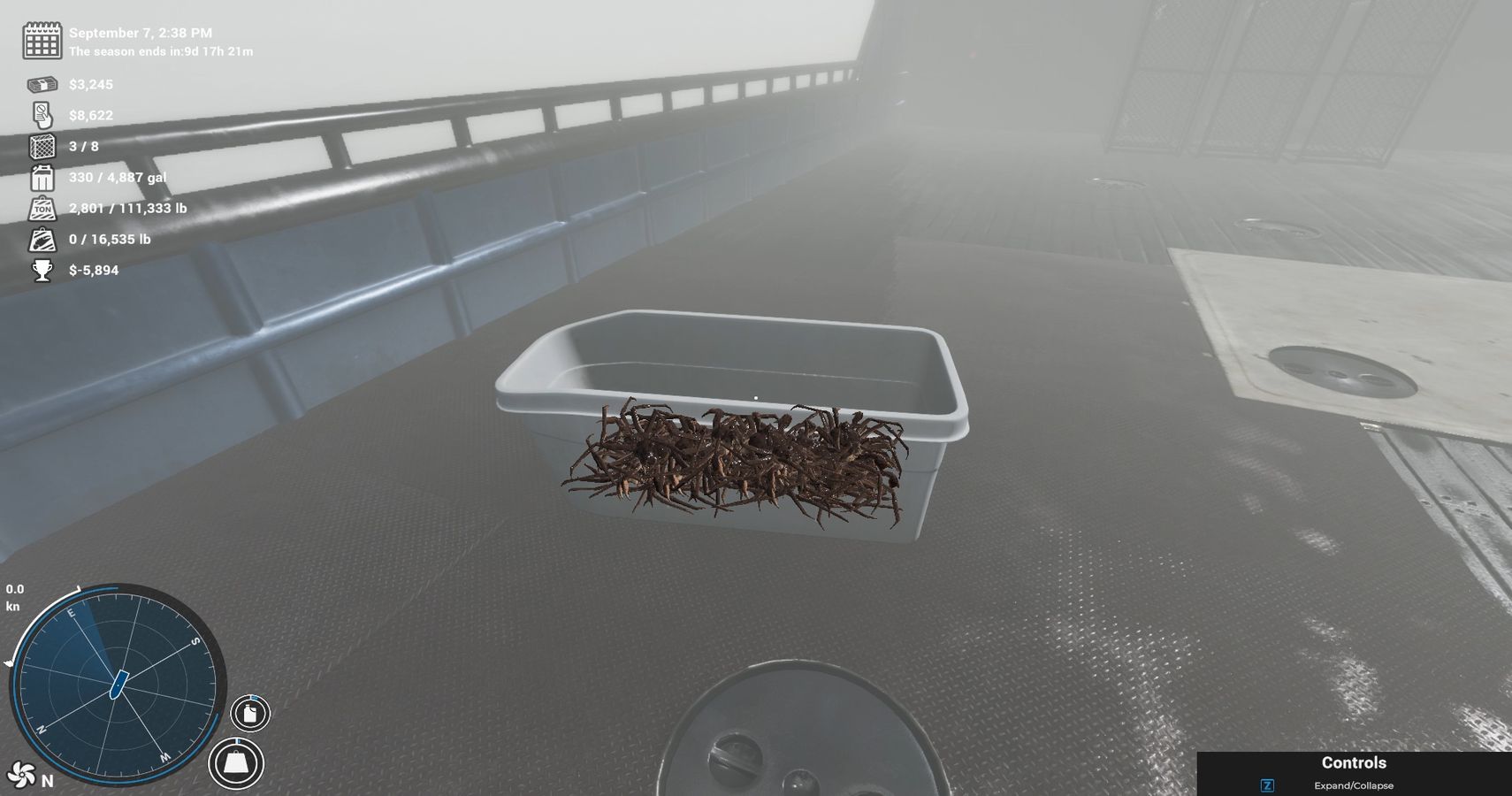 It doesn’t help that the game isn’t too exciting from an audiovisual perspective. The simplistic graphics look like they were made with the original Source engine and may have looked incredible in 2005, but look pretty shabby by today’s standards. There’s barely any music while you’re playing, which means you’ll spend the majority of your time staring at water and crab crotches with only the droning of your ship’s engine to keep you company. There are some decent weather effects as the conditions change from snow to fog to a torrential downpour which does add a certain level of atmosphere, but that’s about the most interesting part of Deadliest Catch‘s visuals.

Crabs aren’t the only thing you’ll catch in Deadliest Catch: The Game, as there’s plenty of bugs for the player to reel in. There were multiple instances of the game crashing or freezing up, as well as some other weird graphical glitches. At one point, the crabs in one of my totes were clipping through the container and could be seen from any section of the boat. It was as if their textures had somehow overpowered every other part of the game. Either that, or these were magical x-ray crabs that should have netted me a fortune. A boring game is one thing, but a boring game that’s this buggy after being in Early Access for so long shows just how little effort was put into his cash grab of a crab project. 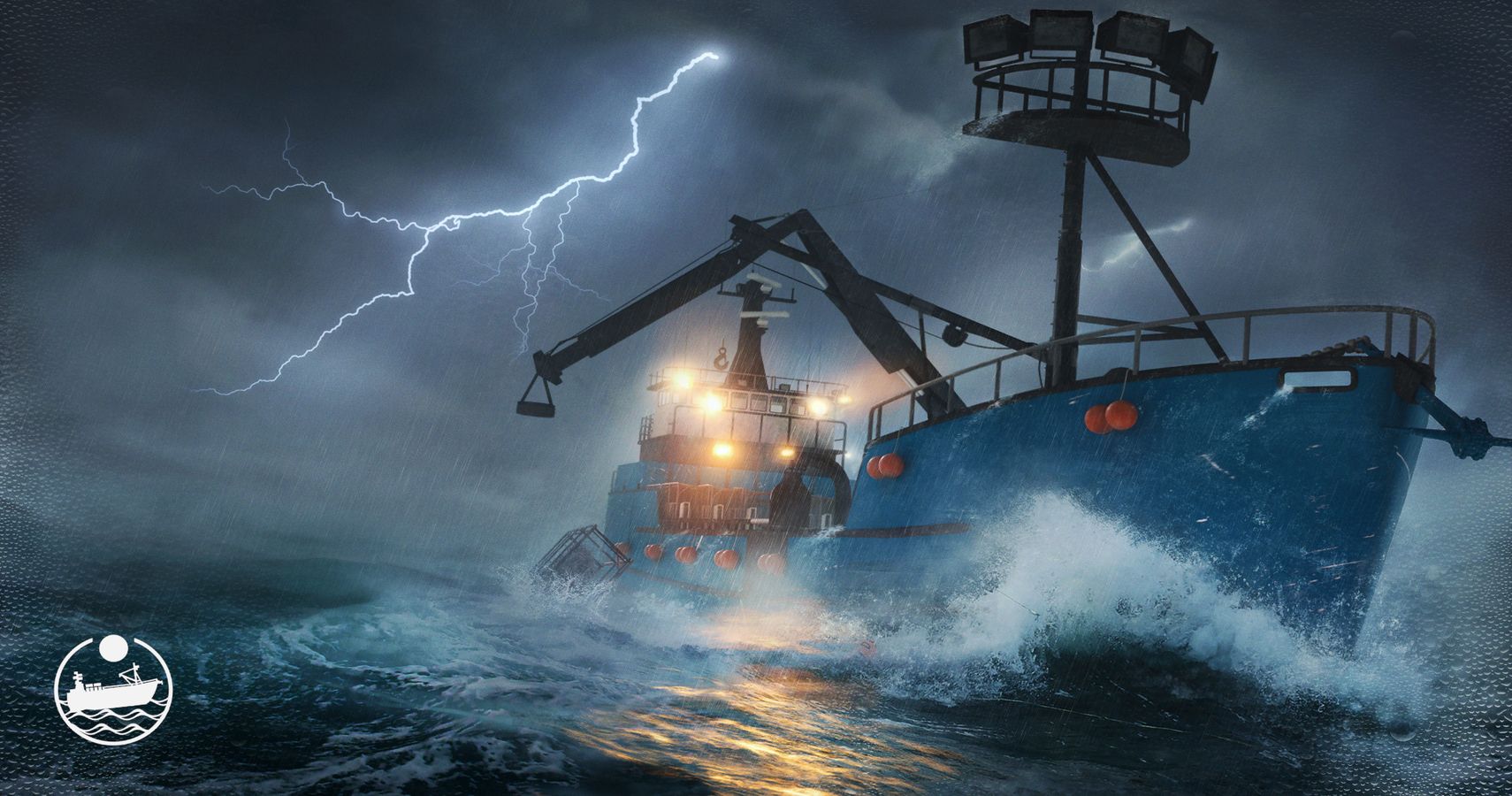 I’m not sure what the appeal of Deadliest Catch: The Game is supposed to be. There just doesn’t seem to be much of a point to anything you do. At least the TV show offers up some drama and excitement by depicting the plight of these fishermen as they fight each other over the right to keep Red Lobster stocked with endless buckets of crab legs. This game just features you as a faceless avatar doing menial tasks without any story or even a dramatic voiceover about your struggles. There’s no stakes or tension, just a giant pile of crabs.

If you really love Deadliest Catch or you have a bizarre fascination with crab-fishing then maybe you’ll like what this title has to offer. For all other sane video game enthusiasts, it’s probably best to leave Deadliest Catch: The Game scuttling down in the muck where it belongs.