Dreams could be the next Minecraft, but it will take a lot of time

At the heart of Dreams, the latest game by LittleBigPlanet studio Media Molecule, lies a simple yet radical concept: Anybody can be a creator.

It doesn’t merely provide talented players with the necessary tools to create nearly anything they can think of. The ambition is grander. Dreams is committed to inspiring everybody to think of themselves as an artist, not only the practiced and the gifted. People, the game shouts, must go out there and make something, regardless of whether they think they can or even should.

Dreams’ ethos contradicts a world that tries its damndest to convince people that art should be reserved for those with talent, or that art is something that should primarily be appreciated and consumed.

The experience begins with something that could be understood as a tutorial, but is really a pep talk meant to pump you up into believing you could put your stuff out into the world, whatever it may be. And sure enough, in the week I’ve spent with the creation suite, that has been true. The tools are easy to pick up, yet remarkably robust.

Dreams provides you with all sorts of prefabricated assets, from characters to platforming elements, which you can place, rotate, resize, and customize to your heart’s content. You can also make your own content from scratch, from sound effects to object animations and everything in between. I was surprised at how straightforward the process felt despite being limited to a video game controller, rather than something more elaborate, like a mouse and keyboard — let alone a suite of game design software and hardware.

To give players a sense of what’s possible within Dreams, Media Molecule includes something akin to a campaign. In it, we learn the story of Art, a troubled bass player who has a falling out with his band. The story flips between Art’s psyche, which is full of painful memories, and his real-world life, where he’s working out how to make his way back to his friends. The story feels remarkably adult given Media Molecule’s larger oeuvre. Art is plagued with doubt and self-hatred, which gives him a self-destructive streak. When he sees his old bandmates, for instance, Art is convinced that they’re speaking ill of him — only to find out that actually, they’re pretty worried about him. As someone with depression, I found that these knotted neuroses felt familiar and true.

[Disclosure: The author of this review is friends with one of Dreams’ writers.]

But since the campaign is a showcase, it never sits still. Genres and mechanics change from level to level. One moment you might be trying your hardest to sneak into a club where your friends are playing, by talking to the people around you; the next you might be jumping around giant leaves as a fox with a pea shooter. It feels a little disjointed, which the game explains away by telling you it’s a dream — but that’s not a great justification. Anytime I was going through the more traditional platforming segments, I was counting down the minutes until I returned to the parts with actual humans in them. Part of Dreams’ campaign is bold and experimental, set on telling a complicated story about feelings. The other is like a slightly less charming version of LittleBigPlanet, floaty physics and all.

Still, there’s that signature Media Molecule playfulness here that imbues joy into interaction with the world’s various objects. Unraveling a matryoshka doll, poking around the innards of a camera, even dying and exploding into bits of fuzz feels gleeful. 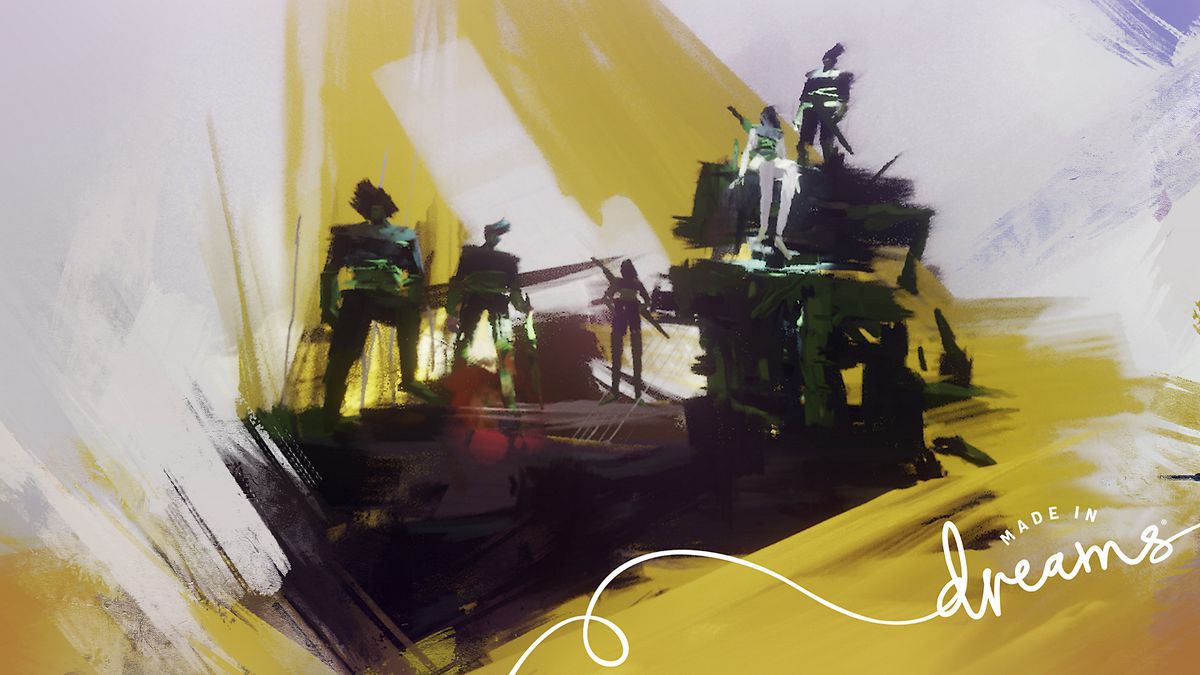 Dreams also has a lush, ethereal art style which makes the game look as if it’s been painted. If you get close enough, you can sometimes make out individual brushstrokes, which shift and change depending on how and where you look at them.

But Media Molecule’s campaign is only a small part of the experience here. Personally, I’m not much of a level designer, so I spent less time making things than I did perusing other people’s uploads. Wouldn’t you know it, these levels are all called “dreams,” and the game allows people to string different scenes together into a larger package. Dreams aren’t all games, though. Sometimes, people upload assets, backgrounds, music, genre templates, and more, which other users can then import into their own games or projects. I spent a hilarious amount of time looking through realistically rendered food porn, such as a steaming bowl of ramen. It’s remarkable that people can make stuff that looks this good … though it’s sometimes annoying to pop into a dream and realize there isn’t more to do than look at a static object.

Media Molecule seems to understand what an experience like this needs to build a community. Dreams can have credits, and can be co-authored by other players. Games can have a variety of tags that help you find similar experiences. The studio also holds game jams every so often, challenging people to make things fulfilling a certain theme. Users can then vote on their favorite creations, which are then highlighted in the multiplayer menu. And perhaps most notably, Media Molecule says it’s going to hire people to form contractor studios that will make more stuff for Dreams. The studio seems invested in the longevity of the game. 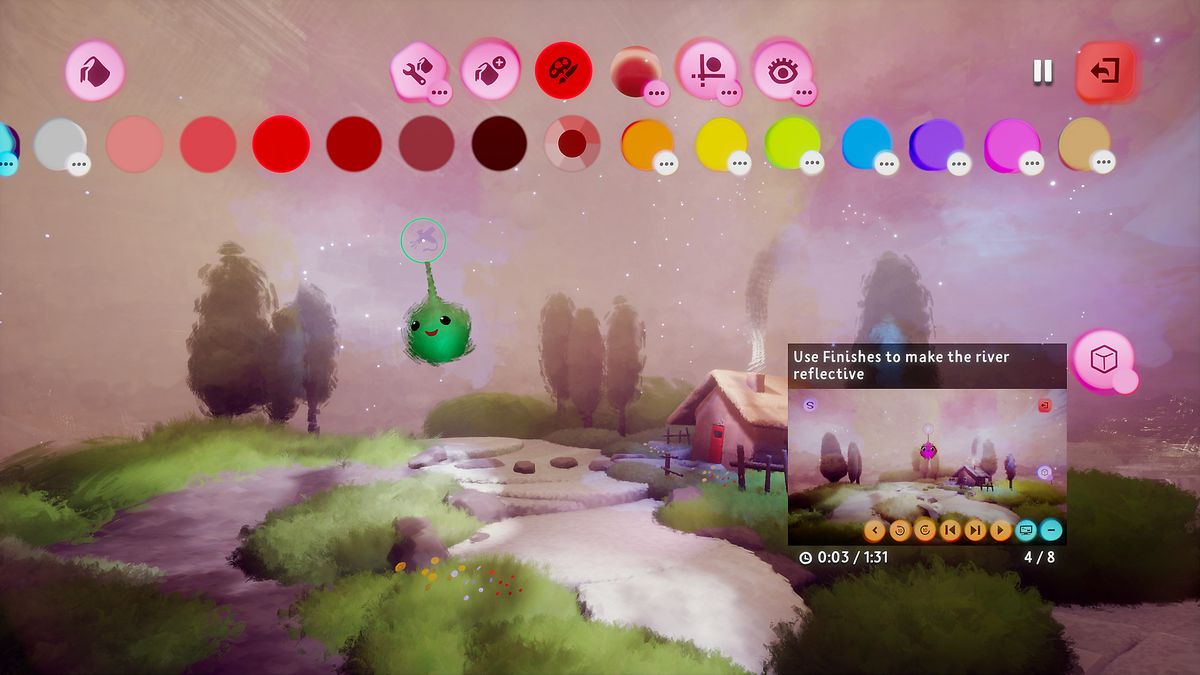 Despite these efforts, the biggest problem facing Dreams remains curation, and how Media Molecule can surface novel experiences for its players. Even with these features, it’s work to find stuff that you might like. I started out by trying dreams that had won an in-game awards show called the IMPYs, and found it to be a mixed bag. The first thing I played was a slice-of-life game that seemed inspired by EarthBound. In terms of scale, it was astounding that an everyday person had put together something so big — there were tiny details everywhere, from cute posters lining the walls to toys that would squeak when you stepped on them.

Compared to most games we can play on consoles, which are made by huge teams, you can feel the authorship and vision of Dreams creations precisely because the experiences lack polish. You can tell where someone made the decision to focus on what they could do best, rather than trying to make every part of the game as high-quality as possible. I was delighted to find, for instance, that the aforementioned game had a dedicated “pet the dog” button. This alone made it easier to forgive that some of the animations were stiff and lifeless.

You can’t really judge the games in Dreams by the same metrics you might use for most games, and frankly, it feels like a healthy exercise. One of the best things I played was called Pig Detective 2, a bizarre and hilarious experience that I nearly dismissed because it initially looked like something out of Roblox. Well, that showed me. 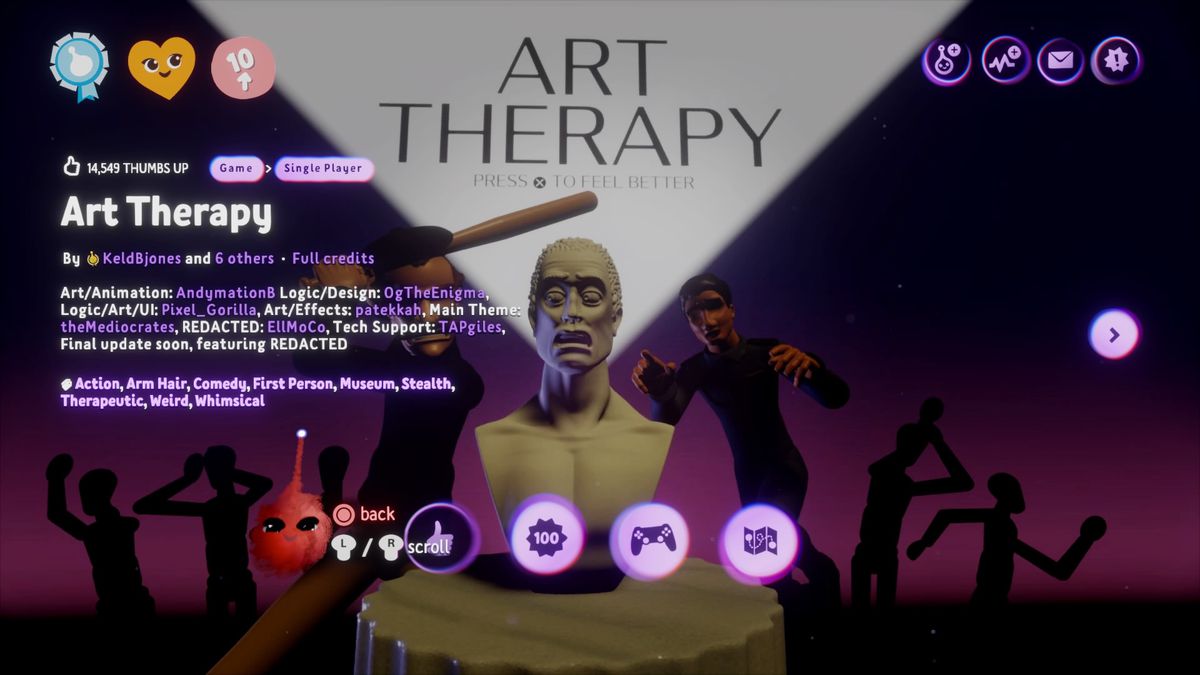 The unavoidable problem, however, is that because these games can be anything and made by anyone, the quality can vary wildly. The most memorable portion in the EarthBound-inspired game came when a little girl in a cardboard tank suddenly challenged my character to a duel. Unfortunately, I soon found myself dying off-screen, unable to respawn back into that portion of the game.

Perhaps the most common mishap I experienced across multiple dreams was getting lost or stuck, because players don’t quite know how to guide people into their dreams. It’s likely that creators can’t account for the nearly endless ways I might interact with what they’ve put together. But without dedicated quality assurance teams, or professional game designers, what can you expect?

Some of the dreams I found were astounding in their ambition, almost looking like something a person could have built in the Unreal Engine. Others, meanwhile, were short, sweet, and humble, sometimes lasting no more than a few minutes. An unfortunate number of popular uploads are merely recreations of things that people already like, such as the horror game P.T.

My favorite finds were definitely the strange and unexpected ones. One game painstakingly rendered real cheeses, challenging me to name each cut. Another had me sneaking around a museum to see how much art I could destroy without getting caught. I was also happy to finally experience Ruckus, a wonderfully satisfying kaiju game that often shifts into real-time newsreels displaying my wanton destruction. 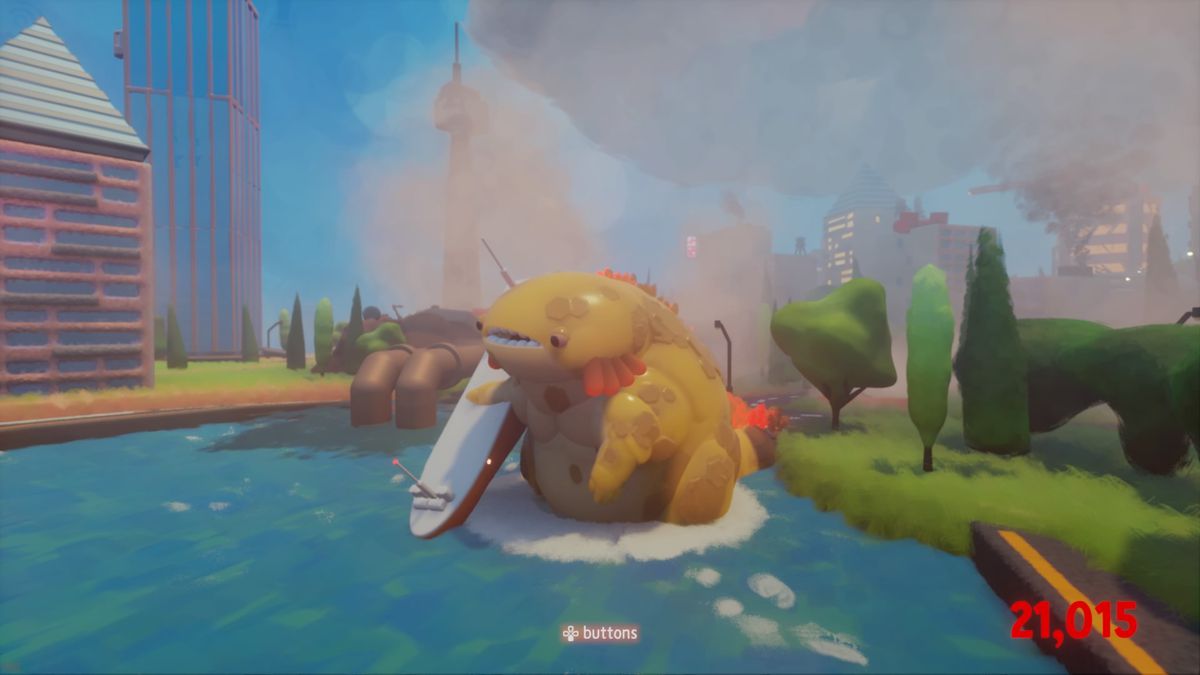 I was shocked to find that the most popular upload that wasn’t made by Media Molecule was a first-person shooter demo that, while impressive given the circumstances, also wasn’t a full experience. This is emblematic of what proliferates in the “dreamiverse.” The coolest items are usually works in progress, vertical slices, alphas, or test concepts; they’re unfinished or snack-sized. Actually, the better the dream looks, the less likely it is to be fleshed out once you start poking around trying to interact with stuff. I rarely walked away from a dream feeling fully satisfied.

It almost feels unfair to gauge where Dreams is at right now, given that it has only officially been out for about a week. Compare that to something like Super Mario Maker, which had a grassroots scene building sophisticated Kaizo levels years before an official game came out. That’s years of community-building, years of learning the grammar and lexicon of knowledgeable creators who can waltz into the game already knowing the basics of how a good Mario course should unfold. Dreams players are still feeling out what’s possible, are still building out their ideal games — and they’re doing it within a much more vast set of genres and disciplines. I have a feeling that months from now, we’ll be seeing some really impressive stuff. But for now, that’s just a dream.

Dreams is now available on PlayStation 4. The game was reviewed using a digital copy provided by Sony Interactive Entertainment. You can find additional information about Polygon’s ethics policy here.