Would Ed Wood’s films have been better with a bigger budget, more realistic sets, and a more technically skilled director? Maybe, but they’d cease to be Ed Wood films.

In the 10 hours I’ve sunk into Earth Defense Force: Iron Rain, I’ve thought a great deal about Wood and what differentiated him above his contemporaries in the world of late-night sci-fi cinema. What separates the mountain of mediocre art from the rarefied stuff we deem “so bad it’s good?” Can it be bottled?

The Earth Defense Force series adapts Japan’s countless Godzilla knockoffs of the 1960s into equally shaggy video games, and would pair nicely with Wood’s brand of high-touch lowbrow art. Like the collected works of Wood, the EDF series has earned a cult status among certain critics and genre obsessives who see beneath its grimy surface something unusual and thrilling.

The new franchise entry, Iron Rain, is technically a spinoff, though it fits within the basic outline of every EDF game. Across tons and tons of missions, I play as a uniquely gifted soldier who must save the planet from giant insects, UFOs, robots, and kaiju. I gradually unlock better weapons, including homing missile launchers and futuristic lasers, to better crush the invaders.

For over a decade, the EDF series has infamously prioritized spectacle over everything else, resulting in games that look 15 years old and contain as many technical bugs as they do giant bugs. Iron Rain, though, marks an unfortunate shift in priorities. This time, the game appeals to — or at least tries to meet the fickle expectations of — Western gamers. (Earth Defense Force: Insect Armageddon made a similarly misguided pitch in 2011.)

Compared with its predecessors — built on an older, faster arcade style of play — Iron Rain borrows modern-ish design trends. Before each mission, I can select support and health items to fill my soldier’s loadout, and I have to make choices about which new weapons to use, as they must be purchased with a confusing trio of currencies. You know, the big design ideas of the early 2010s. 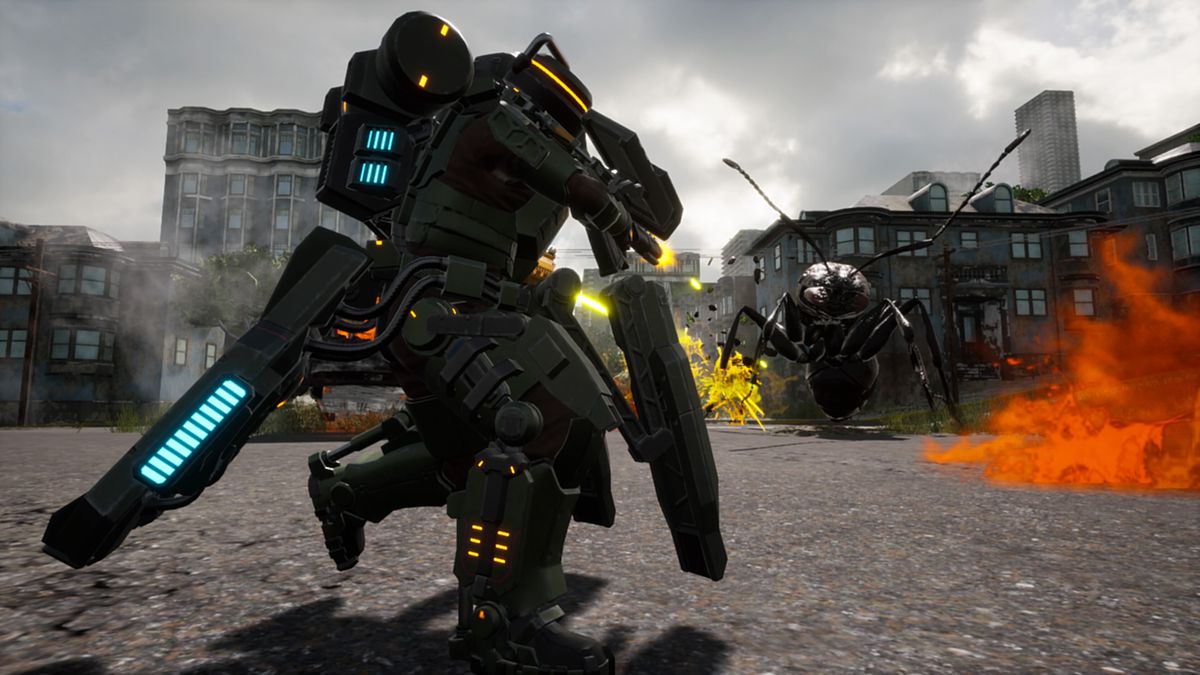 Despite the muddy character options, the game itself makes a strong first impression. Early maps feature cityscapes similar to those in traditional EDF stages, just better lit. Hordes of weak enemies zip through streets and over buildings, which can be knocked down like bowling pins. But the fun stages quickly give way to oddly empty and flat desert settings stuffed with huge bosses that require little strategy, tons of ammo, and an inhuman surplus of patience. Ten levels into the game, the missions began to feel like an infuriating, repetitive grind in which I must chip away at a half dozen big enemies while being bombarded by clouds of pesky, teleporting UFOs. Often, I’d approach the end of a mission only to accidentally kill my soldier with a poorly placed grenade. There are no checkpoints. There is only pain.

These complaints might seem silly to people familiar with, but not totally smitten by, other Earth Defense Force games. Every entry in the series is repetitive and burdened with similarly fussy controls that too often lead to accidental self-destruction at the worst possible moment. Which is why I keep thinking about Ed Wood’s films versus the B-movies of that era that more or less follow the same formula with worse results. Why do Iron Rain’s problems somehow feel worse than they did in other EDF games, when on paper they’re nearly identical?

Best I can reason, the core EDF games benefit from their looseness — not just their lack of perfection, but an almost pervasive lack of interest in it. Iron Rain feels more balanced with its weapon system and loadouts, but I don’t really want that from a franchise that has been generous with its rocket launchers and explosives, which make exterminating this infestation as easy and violent as squashing snails with a sledgehammer. The early stages of Iron Rain treat me like the snail, smashing me over and over as I fight enemies with weapons roughly as powerful as a handful of toothpicks. 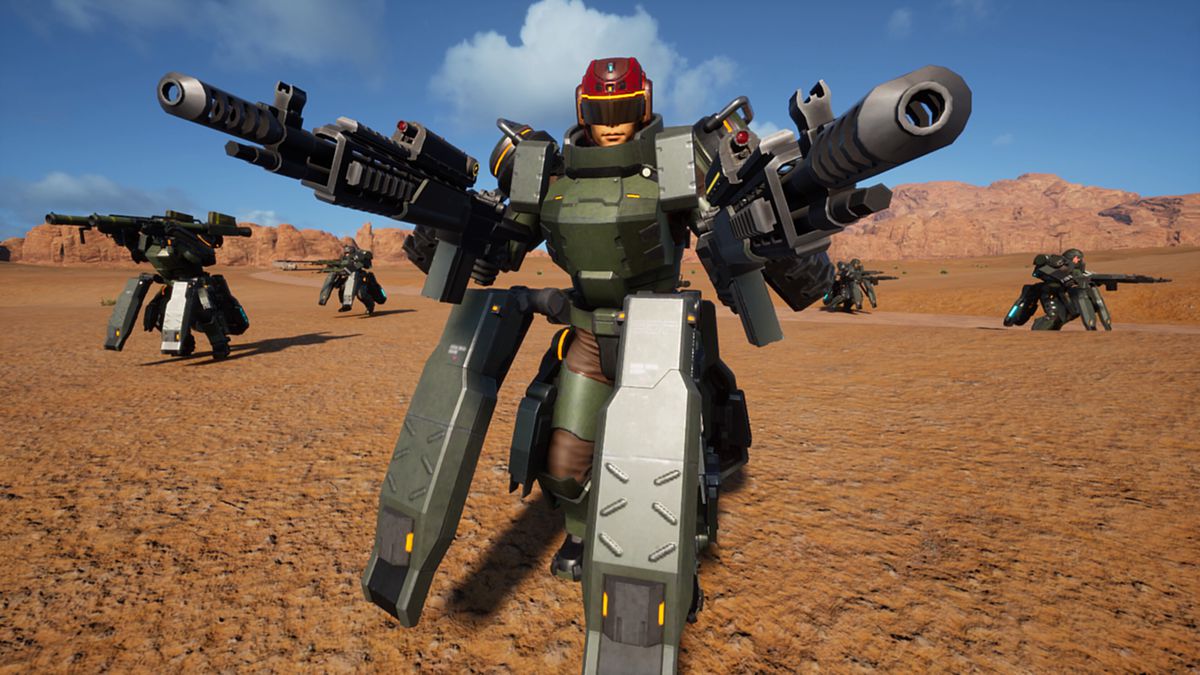 When the camera wasn’t on Matthew Broderick, it even looked somewhat like a Godzilla movie — big lizard attacks big city! But it never really felt like one. Its writer and director failed to understand that the rough edges of the original film didn’t take away from the final product; they gave it a soul. Turns out there’s something timeless and fun about a man in a costume bulldozing large handmade sets. (That’s not to mention that a film about postwar Japan loses something when it’s carelessly dropped into Manhattan.)

When I watch classic Godzilla films or Ed Wood movies, I can see, quite easily, the amount of labor that went into each shot, how the creators had to make the most of the resources available to them. There’s a sweatiness, a workmanlike approach to this art, that makes the best B-movies about supernatural creatures feel fragile and human.

In December, publisher D3 released Earth Defense Force 5 in the United States. Unlike Iron Rain, which was made by series newcomer Yuke’s, EDF 5 was created by Sandlot, the studio responsible for every mainline entry since the franchise was introduced with a budget game in 2003. That debut was just one of many entries in the Simple2000 series, a collection of games created on a quick turnaround and sold for 2,000 yen each (thus the branding). Between the first game and EDF 5, the series grew, adding features like online multiplayer and new character types, though it never lost the spirit of the original.

I’m reluctant to blame Yuke’s for the troubles of Iron Rain; the game does an admirable impression of the series. And I do wonder if it will find its rhythm in later missions. I doubt I’ll see them, though. Iron Rain is meant to be an entry point to the series for newcomers, but for a longtime fan, it’s just proof that a cult classic isn’t made on purpose; it’s the product of a time, a place, and a group of people, usually facing severe limitations.

Iron Rain feels like EDF on a bigger budget, but as the star of the 1998 Godzilla film’s official soundtrack once taught us: more money, more problems.