Fire Emblem: Three Houses brings the best parts of the series together: Strategic battles, a heart-rending storyline, and, of course, 35 romanceable characters to choose from. Unlike some previous games, pairing up characters does not result in kids, so instead of focusing on romancing the character that will produce the best offspring, you can follow your heart.

But 35 is a lot to choose from. The characters in Three Houses run a wide gamut of personalities, physical appearances, and fighting prowess. What’s a player to do?

The Polygon staff sat down to discuss and rank all the romanceable characters in Fire Emblem: Three Houses. There are a lot of factors to take into consideration: How good is their hair? Are they indescribably annoying? Are they so sweet and earnest that you can’t help wanting to protect them to the ends of the earth? Here’s what we came up with.

Petrana Radulovic, Junior Entertainment Reporter: His one personality trait is that he loves Lady Rhea, which automatically makes him … 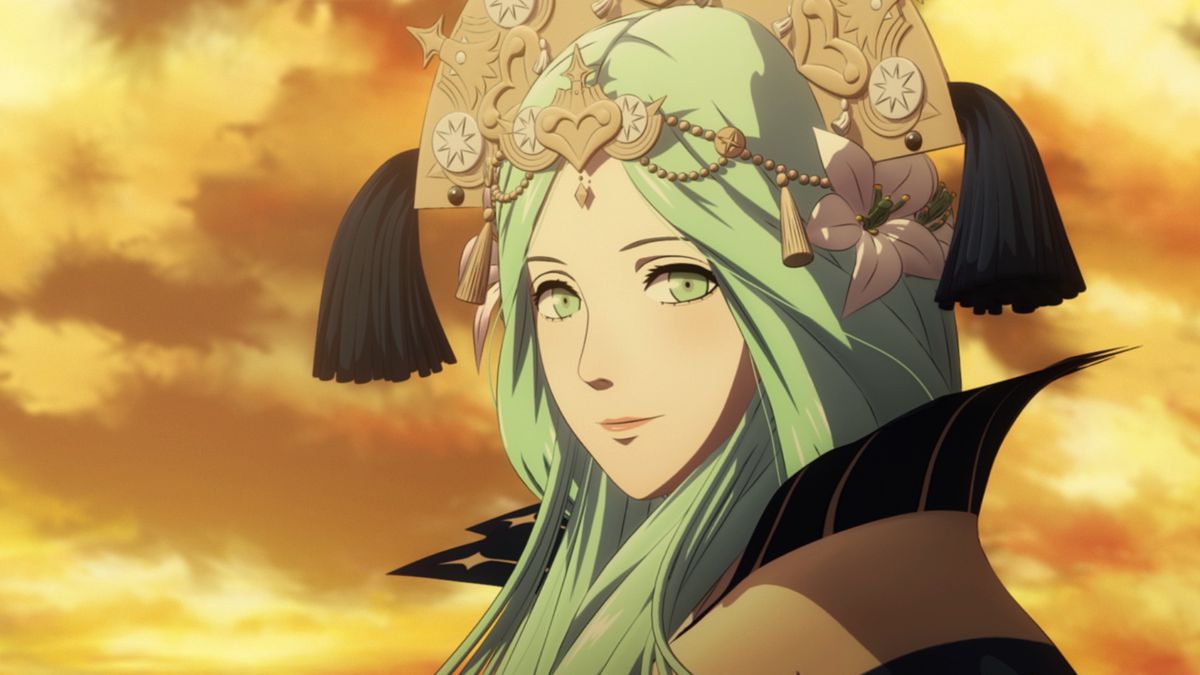 Petrana: I haven’t gotten far enough to know quote-unquote “the truth about her” but I just get massively bad vibes from her. Also, she has mom energy. 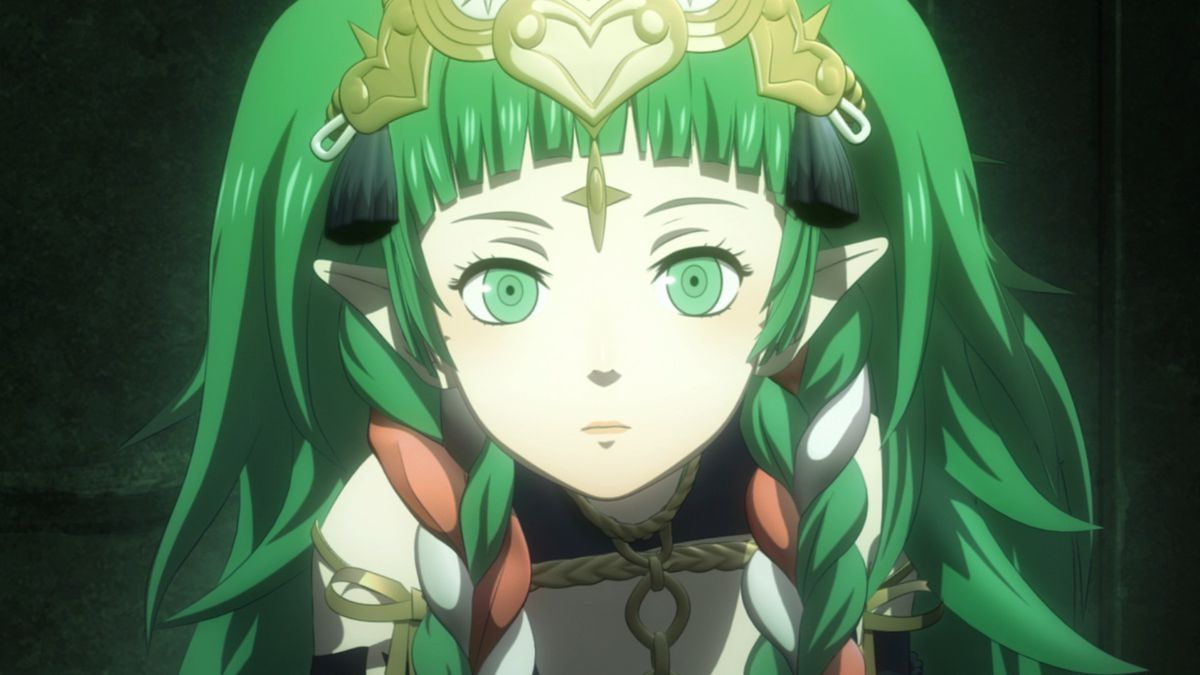 Petrana: Her one trait is that she likes your dad.

Palmer Haasch, Editorial Intern: She has good hair, though.

Palmer: I just think she’s neat. She has really good queer hair. Is that a fair thing to say?

Ryan: She steals all my EXP in every mission that we run together, and I’m mad at her for that.

Karen: He’s mean, but he sort of has that “science teacher I had a crush on” energy.

Ryan: I like his boring but wholesome dad energy.

Karen: I don’t know her.

Petrana: She’s very sweet and very polite. She’s definitely had to deal with a lot of personal trauma, but she’s also very boring. And kinda racist?

Karen: He also has, to me, hot dad energy.

Palmer: He would look better with gray hair, like a silver fox.

Ryan: The one streak of gray hair isn’t doing anything for anybody.

Palmer: Hilda is my strong girl, but she doesn’t give a shit about anything. Also, she looks like Junko from Danganronpa.

Karen: He has the face of a boy, but the voice of a man, and I don’t like that.

Petrana: He’s one of the few characters I actively tried to recruit.

Ryan: I recruited him by accident.

Ryan: That’s honestly the only thing you can say about him.

Petrana: He’s an absolute jerk, but he also makes very good points that no one takes him seriously for.

Karen: He looks like a Yu Yu Hakusho character.

Petrana: He’s very goth, and for that, I have to like him a little bit.

Petrana: He’s such a softie on the inside. He loves to cook, he loves to garden. But he also blindly follows whatever Dimitri does, which is not always the best thing. He has a bad haircut.

Karen: His post-time skip hair is great, though. Also, he’s tall and strong.

Ryan: Oh my god. He’s just me. That’s the only reason I haven’t romanced him, because he has my energy and I hate it.

Karen: She strikes me as the kind of goth girl who would also have Lisa Frank binders.

Palmer: She’s a kid that also really wants to be taken seriously, which I empathize with. She’s sweet, but also will cut you.

Ryan: She looks like a Ghost Pokémon gym leader.

Karen: I resent that he’s not higher. He has such good hair.

Petrana: My big pet peeve with Ferdinand is that he’s a jerk when I try to give him lost items.

Ryan: He has such a huge chip on his shoulder, and I want to give him a hug more than anything.

Petrana: If she didn’t constantly try to hit on you, I think she’d be top tier.

Palmer: I feel like there’s something to be said about the confidence of just having your boobs out like that. I respect it.

Ryan: She keeps finding dates, and good for her.

Karen: When I look at Ashe, I see a void of personality.

Petrana: He’s a good, sweet boy with a really sad back story.

Palmer: She reminds me of the cool girl in The Emoji Movie. It’s a feeling.

Petrana: Her whole thing is that she pushes herself too hard because of her inferiority complex and, honestly, relatable. Also, she gets really powerful.

Karen: I am envious of her hair.

Petrana: She’s the embodiment of Hufflepuff.

Palmer: We stan a bi queen.

Ryan: She sounds possessed, though. Like, she’s going to have this demon turn at some point.

Petrana: I respect the fact that she shares half of my name. Also, her eye tattoo is cool.

Palmer: Her face is good.

Petrana: She talks like Starfire from Teen Titans, and she basically has the same color scheme, too.

Karen: He has dead shark eyes, and I love it.

Ryan: He doesn’t need me, I need him.

Karen: This is just for me.

Palmer: I have nothing to say about Hanneman.

Karen: He has no eyebrows, which I, personally, love.

Petrana: I wish I could get to know him better, but he just shuns everyone who’s not in his house.

Ryan: He does that even if you’re in his house.

Karen: He has the most annoying, awful, mansplaining energy … but it’s good for me. 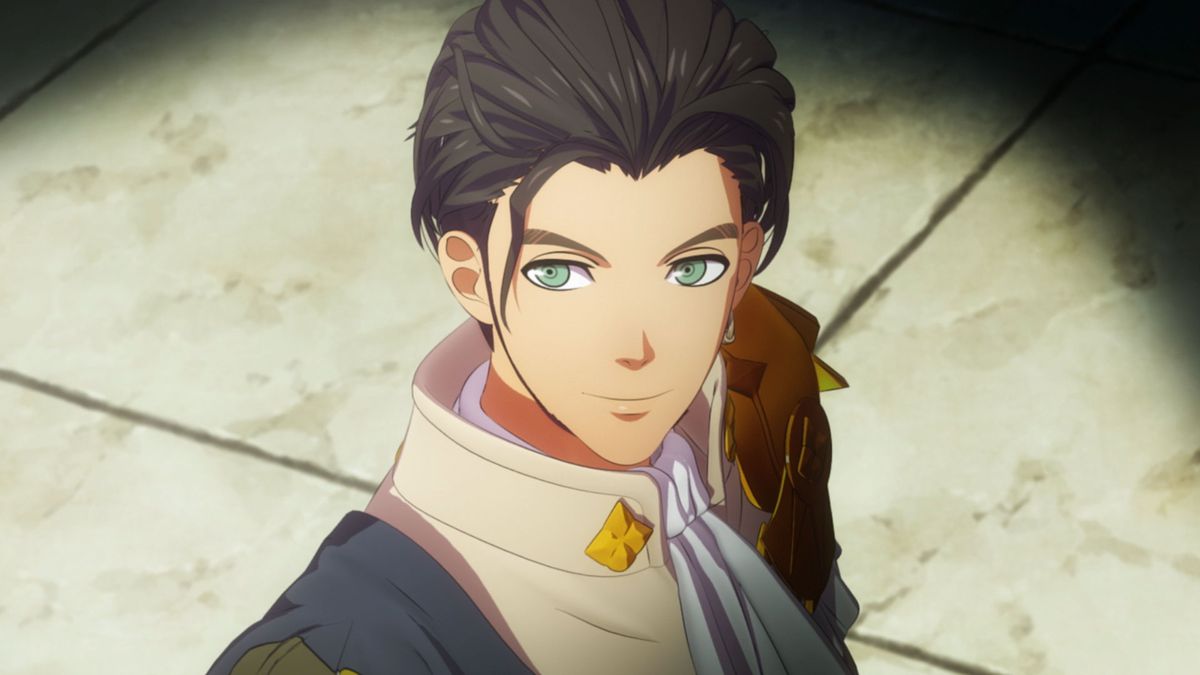 Palmer: I have strong feelings about him and for him. I think it’s funny that everyone is making him out to be this meme-lord, but he’s really just the only house leader without a stick up his ass. The braid is good.

Petrana: I think he’s the leader who ages up the best.

Karen: He gets a chinstrap, though.

Ryan: Seteth has a nice chinstrap. 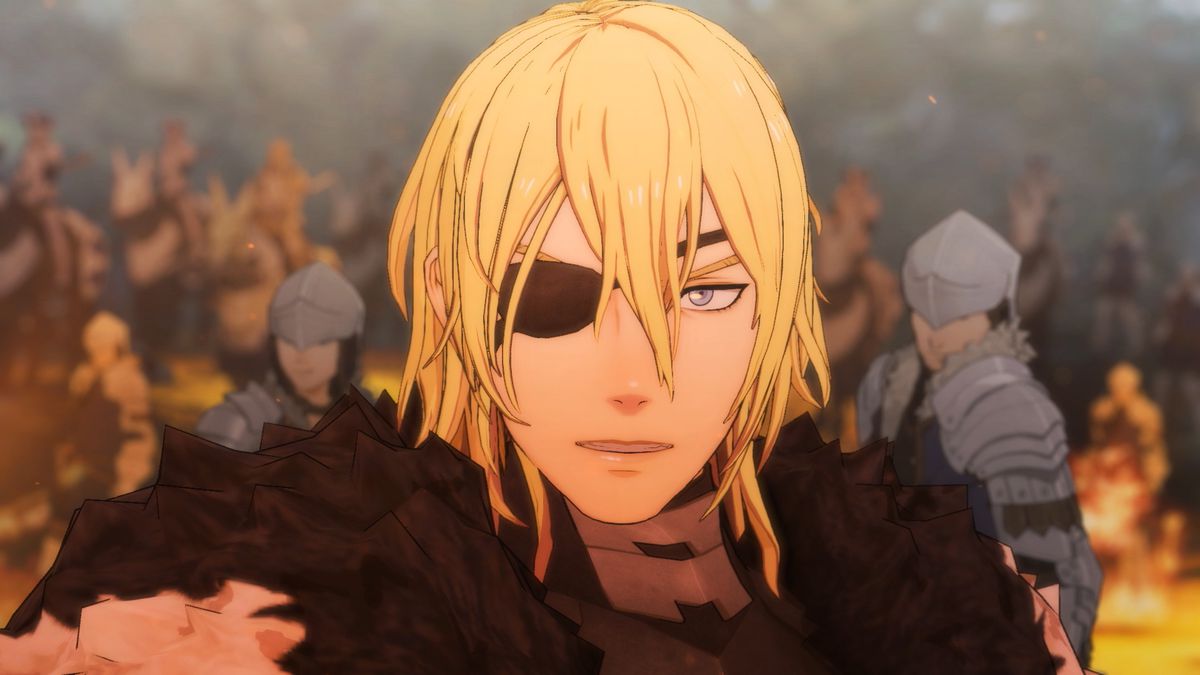 Petrana: Here’s the thing about Dimitri: Pre-time skip, he’s very serious and very formal, which I like, but post-time skip, he becomes absolutely riddled with PTSD, and turns into this Byronic hero, which I love. But he needs help. He needs heavy counseling.

Ryan: I don’t know how he gets the eyepatch, but I’m super into it. 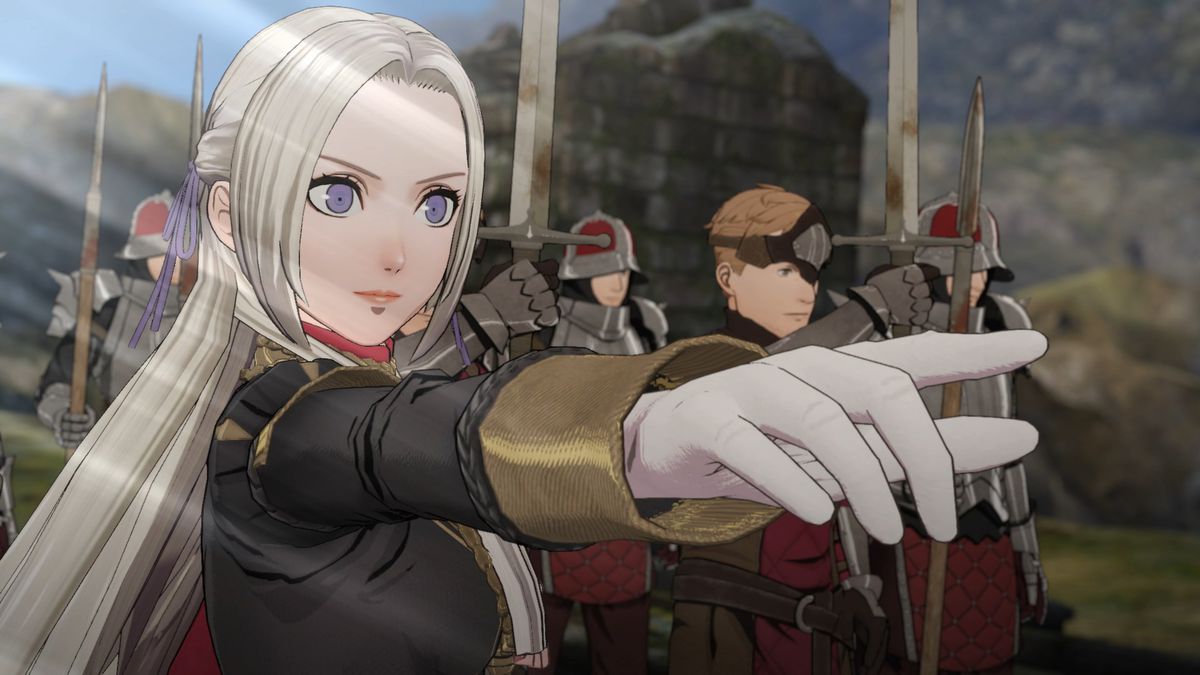 Karen: I like her a lot. I stayed with her throughout the game and she’s way more chill than her reputation suggests.

Ryan: I want to date Edelgard so she can have someone who isn’t Hubert in her life, who can do fun things to express herself that isn’t murdering people.

Karen: He has terrible hair, and I don’t like him.

Petrana: Sylvain’s hair is the thing that is pushing me to romance him over Dimitri.

Ryan: It’s what makes him worth salvaging.

Petrana: He is sweet under that facade of being a ladykiller. His supports with Annette are the sweetest things in the world. He’s also self-aware and considers himself to be trash, so #relatable.

Ryan: He and Lorenz are the same, but I only want to set Lorenz on fire, because of his hair.

Petrana: It only gets worse!

Karen: It gets better! Also, he looks like an Ooccoo.

Palmer: So Lorenz is the absolute worst, but he’s also my special boy. I have to respect the fact that he just constantly is telling Claude that he’s a fraud.

Palmer: She’s so talented and kind, and needs to believe more in herself. Also, her hair is pretty.

Ryan: It’s bad. She does sing that big, long song to Edelgard.

Karen: She has big Kacey Musgraves energy, like the friend of your older sister who is just unbelievably pretty and cool.

Ryan: She’s basically young Manuela, which is exactly what she wants to be. 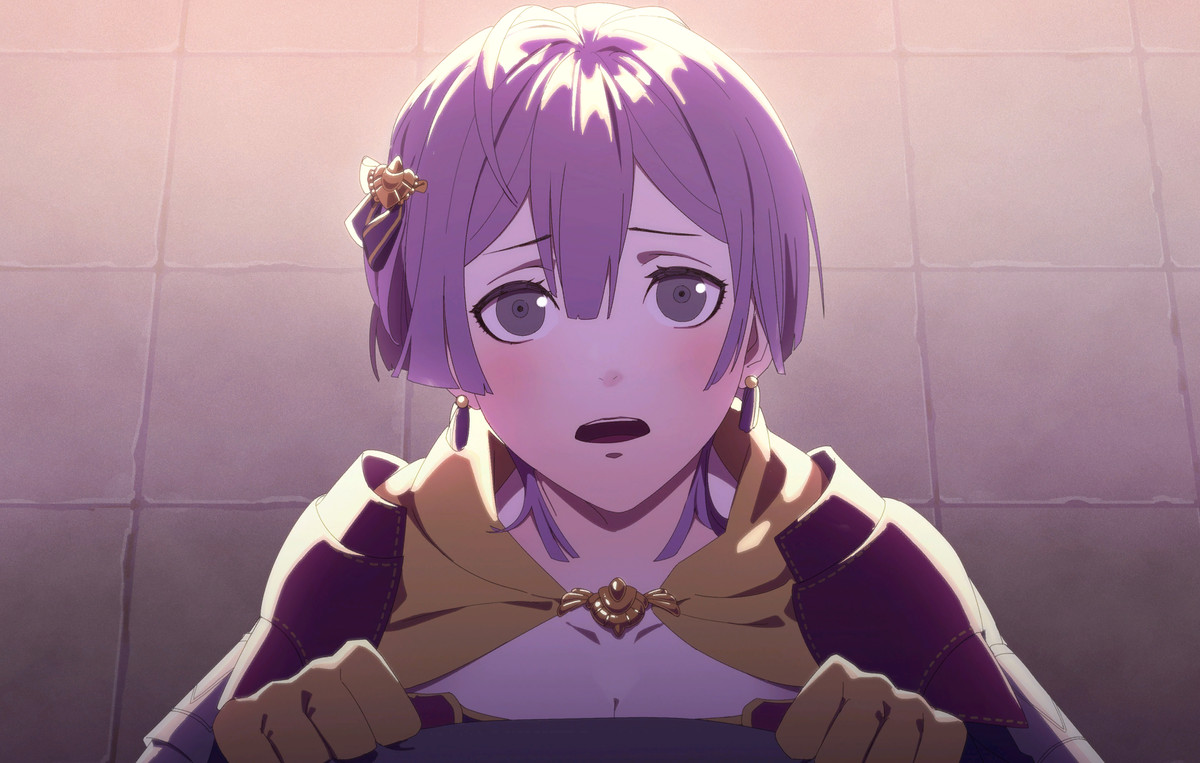 Ryan: She’s so precious. I want to protect her and help her get out of her shell, but also let her stay in her shell if that’s what she really wants. She’s my best unit by far.

Petrana: She’s the one I bent over backwards to try to recruit. I bought so many stuffed bears until she finally agreed to join my house. She’s the best.