If there’s one thing I love in a video game, it’s context. Why am I doing what I’m doing? Who am I? What is this world? These are questions real life shrugs off before reminding you that you’re nothing but a spec of dust floating in an infinite cosmos. Video games are the one true escape to a place where our existence makes sense.

I’ve been playing Fall Guys a lot lately. I’ve won many a crown. But I have no idea why Fall Guys are the way they are – those squishy, grabby gits. Why is their world built like my nightmares where I’m trapped in a soft play warehouse full of screaming children? What do they do outside of the crown grind?

I posed important questions like this to developer Mediatonic, and lead game designer Joe Walsh was kind enough to respond with the same cursed energy as the questions themselves. Strap yourself in, we’re going straight to Lore Town.

JW: We can spend all day getting tied up on ‘statistics’, and ‘facts’, and statements like ‘thoroughly disproven’. The better question is, ‘Do they feel like the worst?’, and the answer is ‘yes’.

In Roll Out you can see the Fall Guys’ world in the background and it’s just islands, water, and trees – how do they live? Do they have houses? Caves? Underwater?

It’s all set dressing! Fall Guys live to compete and do so 24/7. They’re either competing or waiting to go again. Everything else you see is a tawdry bit of fabric covering our criminal lack of worldbuilding.

Do they have TV? Who is watching them compete?

I like to think that the broadcast is going out across the universe for anyone to stumble across if they manage to find the frequency. Anyone can find Fall Guys TV if they twiddle the dial enough. Dials being a thing that TVs definitely still have.

Who makes all the courses? Most of them float in the sky – what technology is being used there?

I’ll be honest we hadn’t thought that far ahead. Hold on we’ll spin the world-building-generator.…Yeah so, according to this, the courses are the remains of an OLD ROBOT GOD, who built the courses for EXTREME HORROR with CITRUS FRUIT. 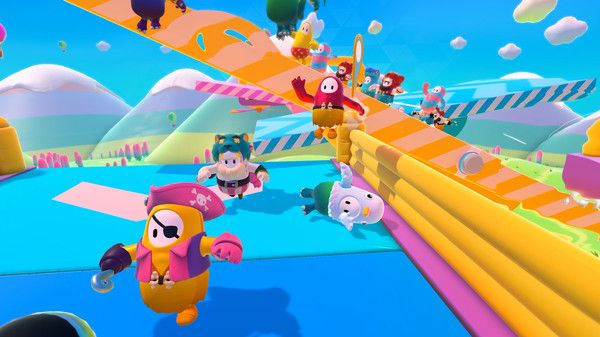 Who is cheering for the Fall Guys – it doesn’t sound like other Fall Guys? It sounds like terrifying human children.

There’s no audience around, so the ‘cheering’ is just pumped into the world to create more atmosphere for the viewers. Maybe different viewers hear it differently depending on where they’re tuning in from (what you’re hearing is terrifying human children, that’s for sure).

What happens to the Fall Guys when they lose and fall off-screen?

A moment of displacement, serenity, zen-like detachment from all worldly and physical bonds… Then they pop back onto the podium to celebrate their achievements! What you’re seeing when you respawn is the same Fall Guy, so the more you play the more you’ve been through together. You’ve put that Fall Guy through a lot, you know. Make sure you thank them by buying them a new outfit once in a while.

What’s in the slime? Is it dead Fall Guys?

The slime is really there to act as padding for our Fall Guys! They’re falling a pretty long way so we felt like it was only fair we cushioned their fall a bit. I can confirm it’s not dead Fall Guys though, no matter what Devolver might say.

All Fall Guys pop into existence fully grown and ready to compete, so there are no ‘baby’ Fall Guys (although I reserve the right to completely change my mind at a later date).

Do they come from eggs?

Ha! I’ve never heard that one before. There is something that spawns from those eggs, but we haven’t gotten around to implementing it yet… 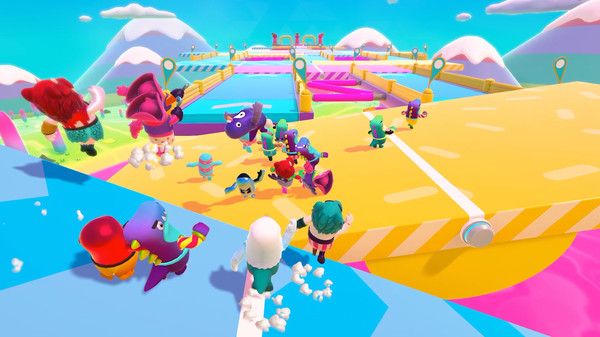 What’s the crease under their chin for?

Looking fabulous without fear of judgment

Are Fall Guys who aren’t wearing a top and bottom naked, or is the skin actually clothing? If so, what do they look like naked? Any concept art going?

Ah, the age-old question of Fall Guys. I can confirm they’re naked when you don’t equip a top or a bottom. Luckily they can’t feel the cold (or be embarrassed on live TV) so we’ve decided to embrace it.

How do they make sounds when they have no mouths? How do they breathe?

We actually spend a lot of time making sure they sounded muffled for this reason! I think there’s some sort of voice box in there somewhere – that sounds like science.

What do they eat?

Why are they so big?

Why are we so small?

Is Mr. Blobby related to the Fall Guys?

I really hope not, I can’t stand and fear him.

Fall Guys can pick each other up and they’re as tall as a tall human. Could they tear a human in half?

If you were standing between it and a crown, potentially, it wouldn’t want to though. It’s like Hippos and water, you never want to get in their way like that. Also, did you know a Hippo can outrun a human? I think about that a lot. 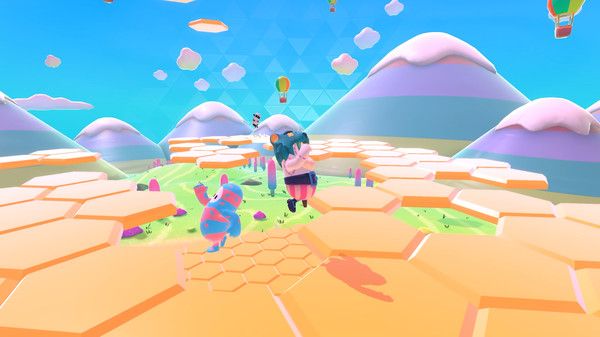 What do Fall Guys do for fun when they’re not running deadly obstacle courses?

Dress themselves up in stupid costumes, or fill the void waiting to be selected again. Sounds like a pretty nice life to me.

How much do they weigh?

Three Minions, or half a Mike Wazowski.

Would you rather fight 100 duck-sized Fall Guys or one Fall Guys-sized duck?

100 duck-sized Fall Guys, definitely. I think I could take them.

Is their world a planet or is it a never-ending flat plane with no curvature?

It’s a planet. I like to think there [are] competitions going on all over the planet at any given time. Beneath your See-Saw, there’s a dozen Fall Guys about to get eliminated on Hex-a-gone somewhere!

What do Fall Guys taste like?Like the back of a stamp.

Do they have any natural predators?I’ll just say that whatever hatches from those golden eggs isn’t likely to be pleased about being thrown around that much…