Final Fantasy 7 is a dramatic, emotionally charged game about a world on the brink of destruction. Its grand, sweeping story deals with big themes like life, death, and environmentalism, and still resonates with thousands of fans decades later. It's also a game where you challenge a semi-nude wrestler to a squat competition to win a powdered wig, so you can dress up as a woman and trick a horny gangster into fancying you. In any other game this kind of tonal whiplash would be off-putting, but it's actually a big part of what makes Final Fantasy 7 so charming, offbeat, and unique. The game walks a precarious tightrope between the serious and the absurd, but always, somehow, manages to keep its balance.

This extends to the game's vast bestiary of enemies, which is one of the strangest, creepiest collections of creatures ever assembled in a video game. Plenty of JRPGs have weird monster designs. I mean, just look at Mara from the Shin Megami Tensei series. Google it. I'll wait. But Final Fantasy 7 is on a whole other level. There are almost 300 in total, and among a fairly typical assortment of dragons, goblins, and other familiar fantasy creatures, there are some truly baffling creations. As you play through the game and fight increasingly ludicrous creatures, you get the feeling that Squaresoft just let its artists do whatever they wanted. There's no consistent theme, no sense of a coherent vision for the game's monsters.

The result is an RPG featuring a truly bewildering, but brilliant, rogue's gallery. Most people know about Hell House, a creature that looks like a small house but transforms into a bomb-tossing crab monster when angered. Such is this weirdo's reputation, it was given a more prominent role as a tongue-in-cheek boss in Final Fantasy 7 Remake. Hell House is definitely odd. I mean, the place where it hangs out—Sector 6 in the Midgar slums—is notable for its complete absence of other small houses, making this disguise extra confusing. Who are you trying to fool, Hell House? We know you're not a house. Stop making a fool of yourself. But, remarkably, this freak is just the tip of a very peculiar iceberg.

During the escape from Shinra's headquarters, the party encounters an enemy called a Brain Pod. In its initial form it looks like some kind of steampunk teapot, and not very threatening at all. But then, using a robot arm, it plucks a lid off its head and reveals the hideous, pink face of a small, furious man. He is horrifying to look at, and one of this location's trickier enemies too, spewing out poisonous black fog. Brain Pod also appears in Final Fantasy 7 Remake, but the red-faced man is gone. Elsewhere in the Shinra building you fight a security device called Warning Board, which flashes you messages like "Leave at once!" and spawns turrets. It's not just the monsters that are weird, the machines are too. 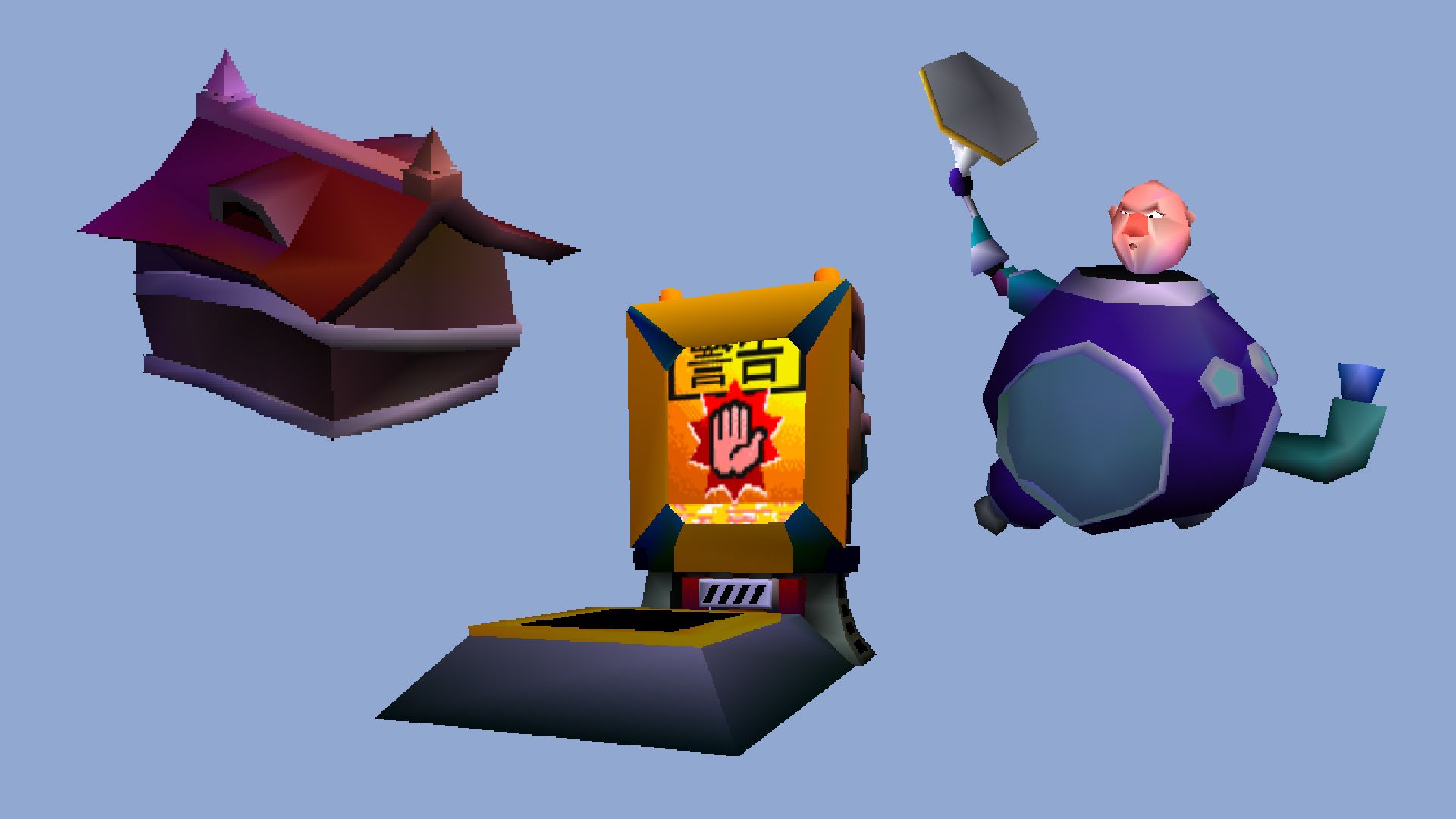 Not weird enough? Okay, how about Touch Me, a tiny bipedal amphibian that can transform the entire party into frogs, reducing their attack power to basically nothing. Or Mover, a giant, featureless beach ball that has a 6.25% chance of appearing in the Northern Cave. This thing has barely any hit points and laughably weak attacks, but killing one rewards you with a mountain of experience points. Presumably it was placed here by the developers for anyone who found themselves having to grind before tackling the game's tricky final dungeon, which was nice of them. Or how about Battery Cap, an electric mushroom with four mouths filled with sharp teeth, each of which shoots a deadly laser.

I can do weirder. Also in the Northern Cave you'll run into a monster called Sculpture, which looks like the monolith from 2001: A Space Odyssey, but with feet and two flame-spewing chimneys at the top. This is what I mean when I say Final Fantasy 7's enemies have no design. This thing doesn't make sense on any level. Why does it live in a crater? Why is it trying to kill me? Why is it weak to Holy magic? What is it? Equally ludicrous is Headbomber, a yellow penguin with glowing red eyes, ANGER printed on its chest in Japanese kanji, and spikes on its flippers. I also have to mention Elfadunk. Not because it's especially odd—it's merely a large fluorescent blue elephant—but because it's called Elfadunk. 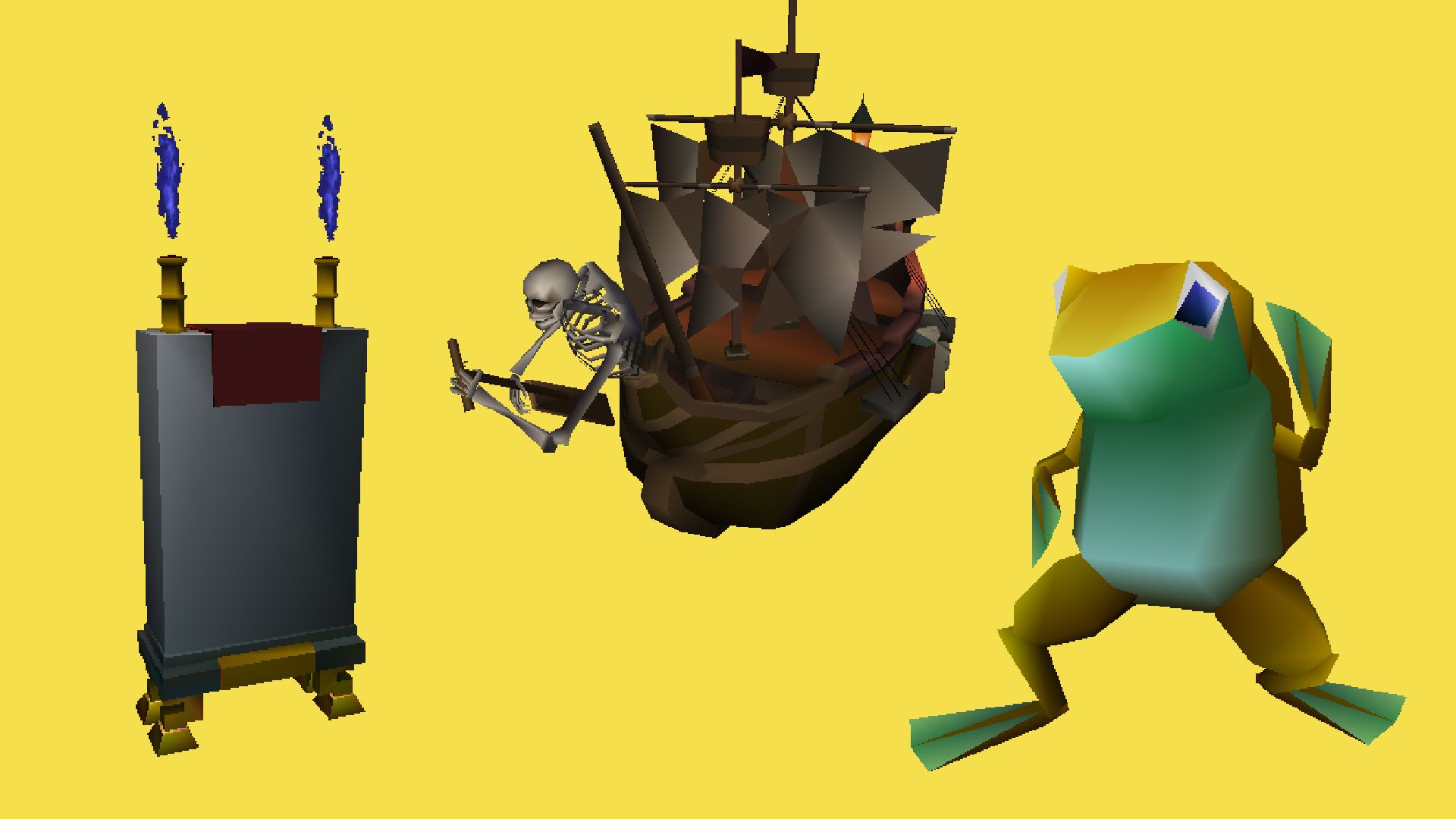 More weird? Fine, fine. How about Ghost Ship, which is exactly what it sounds like. Found deep in the Junon underwater reactor, this is an old galleon straight out of Pirates of the Caribbean, with an oversized skeleton jutting out of the front, moving the ship—which is actually itself—by rowing. I would love to see the moment when a Squaresoft artist put this on Tetsuya Nomura's desk for approval. He was probably distracted by a drawing he was doing of a really big sword and was like "Yeah, whatever." That's the only explanation for something this wildly off-theme appearing in a game with an otherwise sci-fi/cyberpunk aesthetic. But I still remember it all these years later, so it clearly made an impact.

I could go on. I haven't even mentioned Christopher—yes, its name is simply Christopher—a masked monster with a boomerang for a head that can cast Death on the party. Or the wonderfully named Dorky Face, a weird spinning, pumpkin-headed thing found in the Shinra mansion. Or Grangalan, which is just a big egg with haunted, staring eyes. Or Hedgehog Pie, a cackling, pot-bellied demon that is neither hedgehog nor pie. Seriously, what were they putting in the water at Squaresoft HQ in the late '90s? In all other areas Final Fantasy 7 has a really defined, considered, consistent art style, which makes the random selection of oddballs it has your party fighting even more beautifully baffling.