There is no other genre that has translated to VR better than escape rooms. Being trapped in a room while trapped in a headset is such a viscerally harmonious experience to me. Escape rooms gamify exploring 3D space in a way that VR is perfectly equipped for. I’ve been to a number of real-life escape rooms, and every single one I’ve played could be translated directly into VR perfectly. Of course, the inverse is not always true, especially in the case of a game like Flow Weaver.

Flow Weaver adds an interesting spin to the escape room formula. Instead of exploring a room for clues and puzzles to solve, you need to explore a room that exists simultaneously between several dimensions. Things you do in one dimension have a direct effect on the others, and you’ll need to understand how each dimension interacts in order to escape. What’s more, you’ll acquire a set of magic powers that can be used to interact with objects throughout each dimension in interesting ways. Flow Weaver provides a lot of fresh ideas to the escape room genre, but as a VR game, it under-delivers. Unlike The Room VR: A Dark Matter, which takes advantage of everything VR has to offer, Flow Weaver’s biggest problems all come from the limitations of the virtual reality platform. It’s a great escape room game that’s well worth the three hours it takes to complete, but if I could play a pancake version on PC, I would.

Flow Weaver’s puzzle design is much closer to classic point-and-click adventure games like Monkey Island than it is to more modern escape room games like The Room. Your journey through Flow Weaver is less about tinkering with puzzle boxes to figure out how they open and more about interacting with characters in the different dimensions to find out what they need and what they can give you that will help you progress. The story of Flow Weaver is a lot more dense than you might expect a three-hour game to be, and it features just about every fantasy trope you could imagine. Necromancers, faeries, dragons, floating cities, and the pits of hell are all major story elements of Flow Weaver. Practically nothing in the game is simply setting or set dressing for familiar puzzle solving. Rather, all of the creatures, characters, and locations are important parts of the story and puzzles. I liken Flow Weaver to Monkey Island because, truly, the story and the puzzles are inseparable. 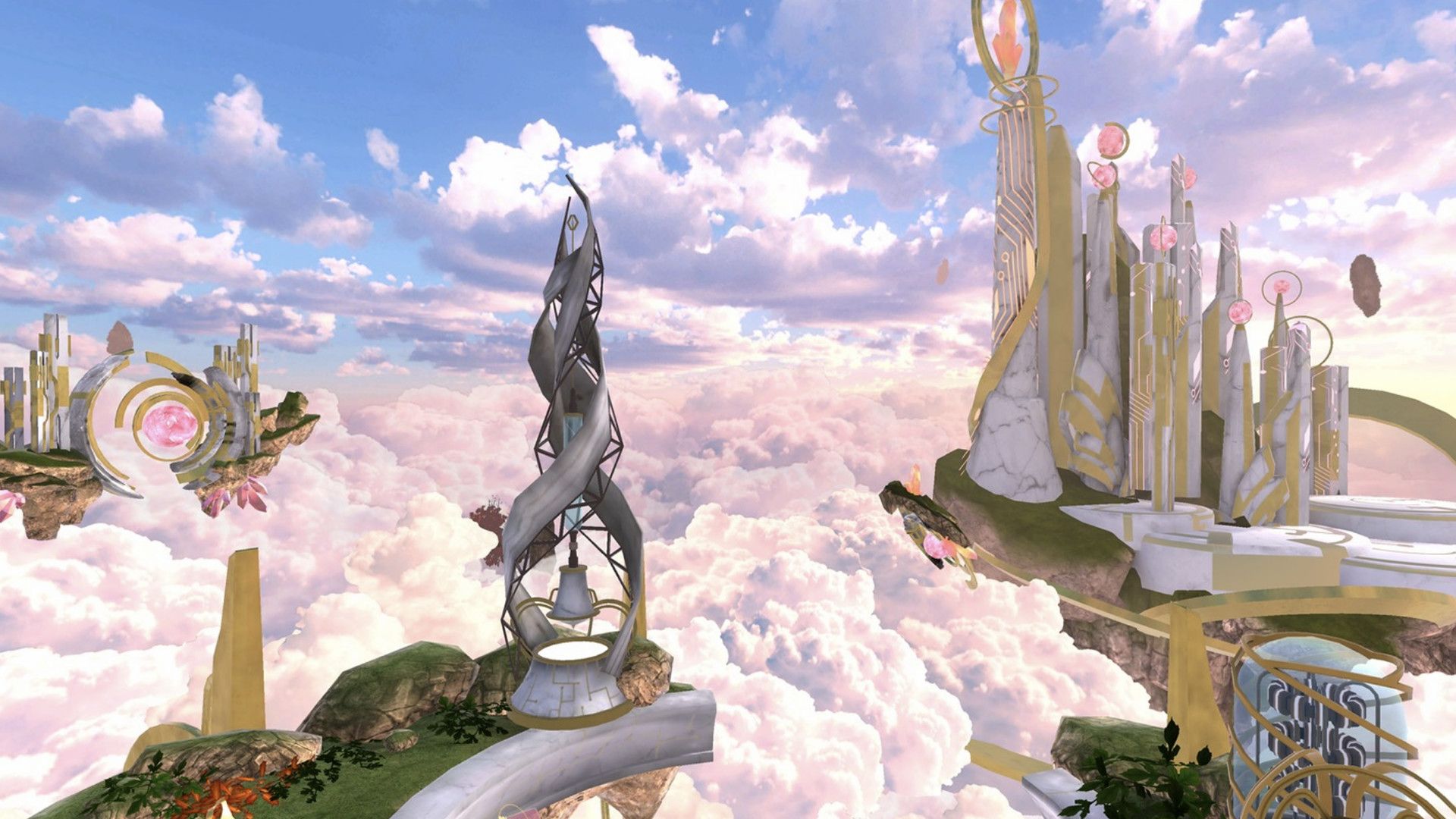 As an example, throughout Flow Weaver you’ll need to collect a series of keys that will allow you to access different dimensions. When you first travel to the faerie dimension, you’ll learn that the fae has one such key. However, they’ll only give you the key if you’ll help them create a special potion. To find the recipe, you’ll need to revisit the material world where another captive, now dead, has recorded the ingredients for you. One of those ingredients is ectoplasm, so you’ll then need to travel to the dimension of the dead and figure out how to collect the ectoplasm from the ghost of the captive you met in the material world. You cannot progress through Flow Weaver without following the narrative and making these connections between the different characters and dimensions. While it’s a game about escaping a room, literally speaking, I think it’s better to think of Flow Weaver as a point-and-click adventure game, especially because the actual mechanical puzzles that escape room games are known for are few and far between.

The genius of Flow Weaver’s design is how freely it lets you find solutions and progress in different directions. The first two dimensions need to be opened in sequence as the game teaches you the rules, but after that, it really opens up to solving puzzles in any order you choose. It’s entirely possible to find the five rune stones you need to free yourself in a completely different order from someone else. I somehow crafted the final key to the game’s last dimension almost an hour before I knew what it was for. This kind of open design helps to alleviate the friction points when you just can’t figure out where to go next. If you get stuck on one solution, there’s a good chance you can turn your focus to something else for a while and pull on that thread until it opens up a completely new set of puzzles to solve. 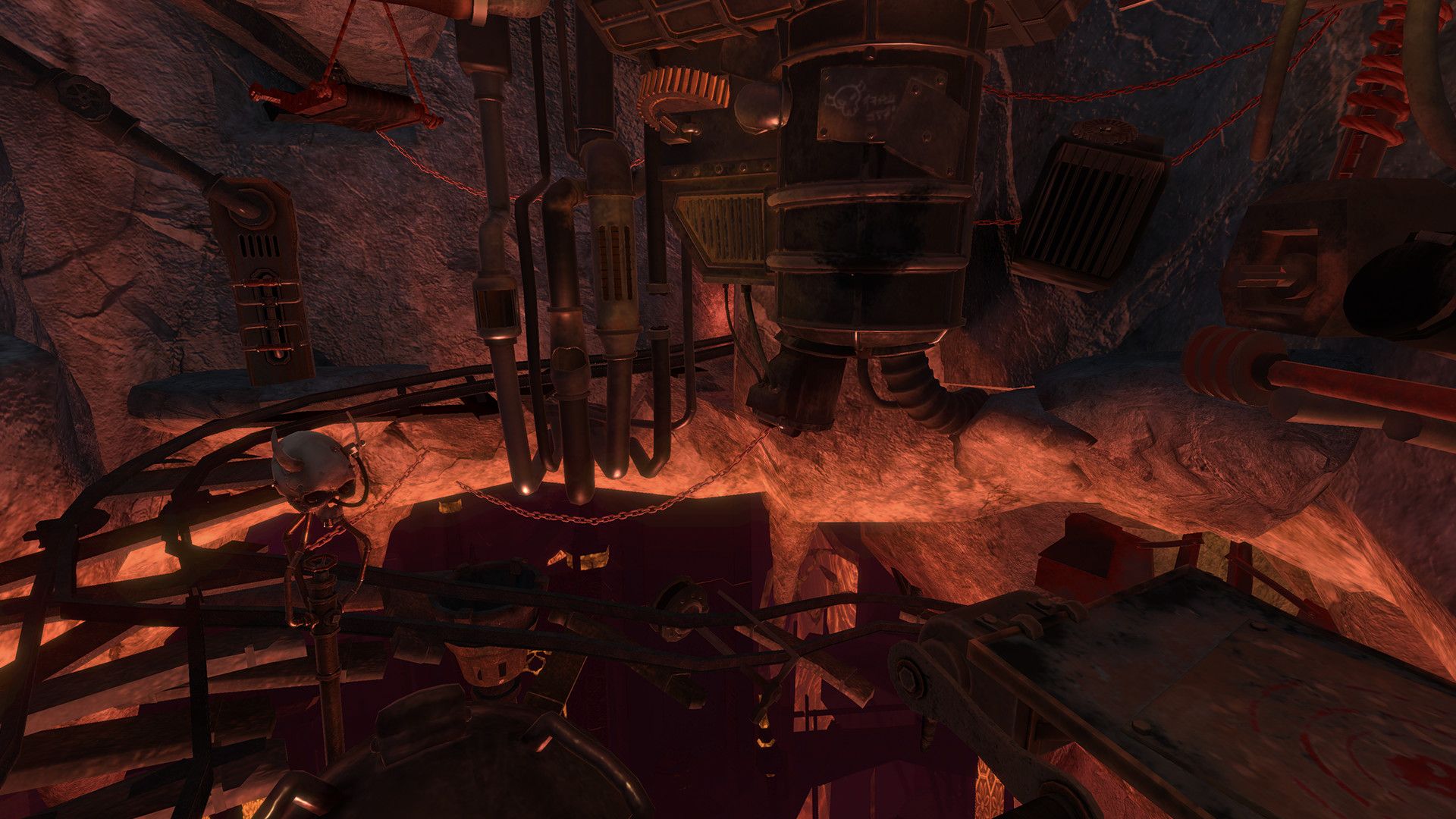 Another major difference between Flow Weaver and other VR escape room games is the lack of exploration. In Flow Weaver, your character is trapped in a circle of binding. You’re completely unable to move around and can only interact with objects within arm’s reach. Instead of searching each dimension to look high and low for clues and use different perspectives to explore space, everything you need to find is right in front of you in plain sight. I have enjoyed seated VR experiences like this in the past that don’t require you to move around other than to look and reach out with your arms, but for the most part, VR really only gets in the way in Flow Weaver.

Throughout the game, you learn a number of spells that you need to use in order to interact with objects. Most importantly, the shadow hand ability allows you to reach out and grab distant objects. When you grab something out of reach, you can push and pull it freely through space using the control stick, but once it’s in your hand, it’s stuck there. You can drop the object and use your shadow hand again to move it around, but sometimes dropping objects returns them to their original position in the dimension, or to the dimension they originally came from, or to a random place in your current dimension. My biggest problems with Flow Weaver were not puzzles that were too difficult to solve, but rather using the control scheme to place objects where I’d already figured out they were supposed to go. 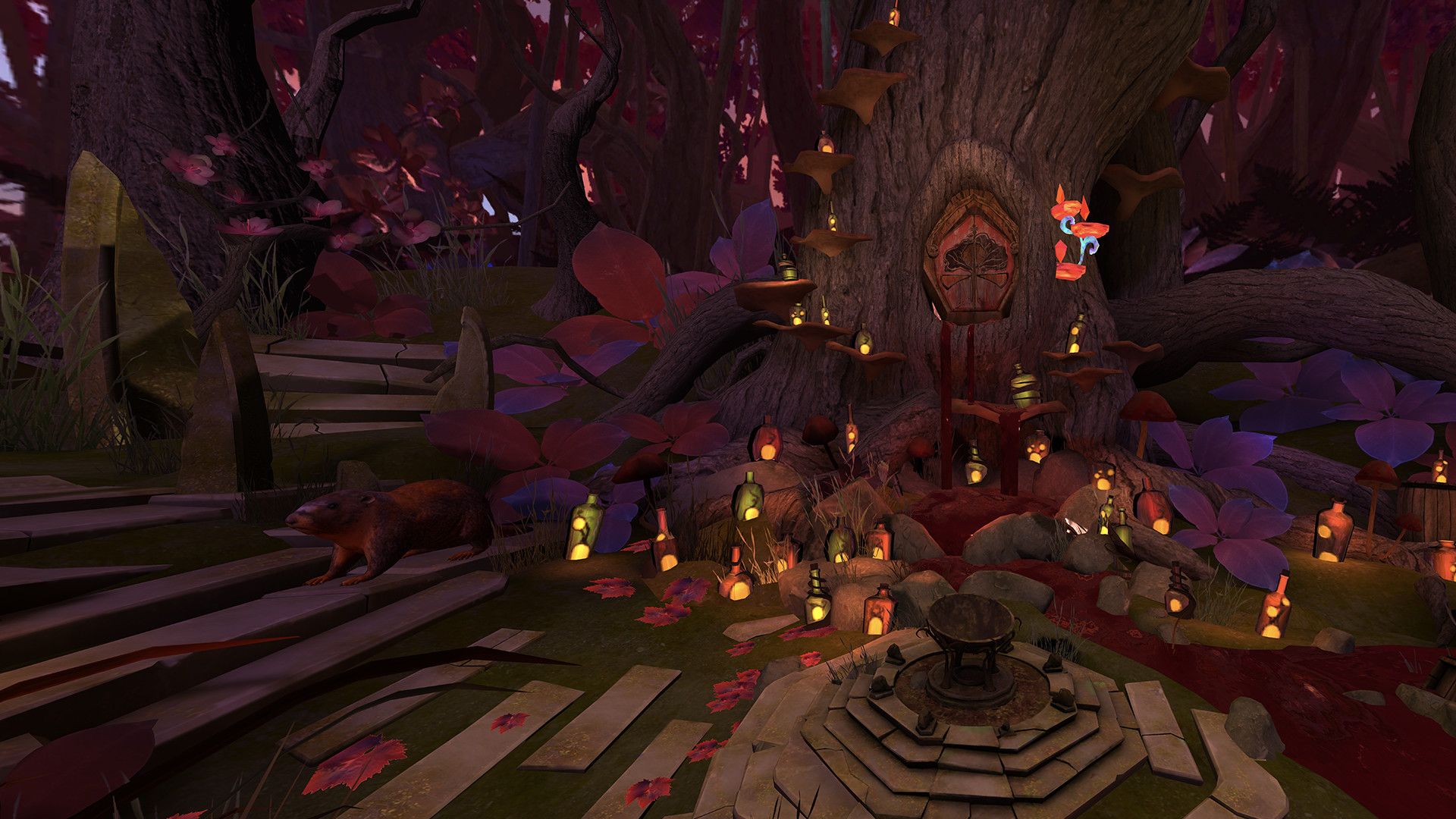 Physically interacting with things in Flow Weaver was maddening at times. At one point I needed to pull a lever to release a mine cart that would travel down a track and open a gate that would then allow me to grab a gear. The problem was that it was pretty unclear where the gear needed to go, and the only way to figure out its position was to move it around with my shadow hand and then drop it and hope it snapped into place. Every time I tried to put it in the wrong place it would fall into a pit of lava below me and reset back in its original spot behind the gate. I’d then need to restart the whole minecart process over again. It was incredibly frustrating, and I can’t help but feel like it wouldn’t have been a big deal at all if I was just clicking on the screen with a mouse until I found the right spot for it. Two of the other three spells just turn your hand into a mouse pointer to click on distant objects.

I can’t remember a single interaction that felt enhanced by the motion controls or VR. I can count on one hand how many times you actually have to reach out and touch things to interact with them, the rest of the time you’re just pointing at distant objects with your outstretched arms and awkwardly moving them around. I don’t think anything would have been lost from Flow Weaver had it been a normal FPS game on PC, and in fact, it would have been much easier and comfortable to play. I really enjoyed the story and puzzle-solving in Flow Weaver, but I don’t think it uses VR in a meaningful way at all.

Next: Black Legend Review: A Tale Best Left In The Past 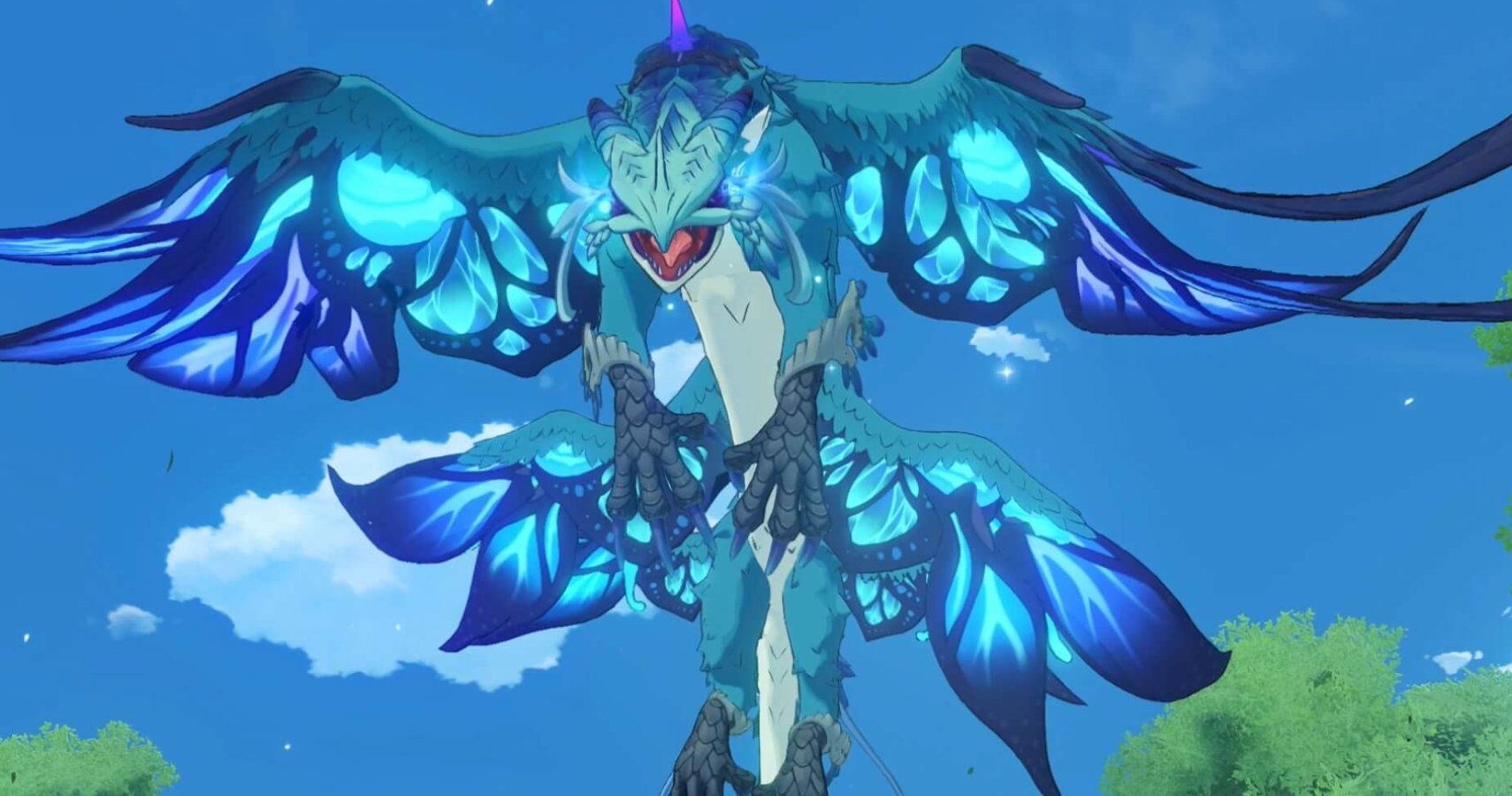