When Genshin Impact introduced Hangouts the initial thought was that they were the game’s equivalent of a mini dating simulator. They allow you to get to know some of Teyvat’s residents better by inviting them to well, hang out. Each event is a choose-your-own-adventure type scenario with the freedom to make decisions that will affect your interactions with that character.

The first group of events allows you to get closer to Noelle, Barbara, Bennett, or Chongyun. However, if this is a dating simulator I’d like to complain. My experience sent me on some of the worst dates I’ve ever had, and I was once taken to see Black Hawk Down on Valentine’s day by someone who knows I despise war movies.

My disaster began when I ran into Bennett in Mondstadt. Now, I didn’t mind at first. After all, the unlucky adventurer has been pretty helpful during my encounters with those huge Hilichurls with wooden shields. He can melt those suckers in no time, making taking them down a much easier task. So, when he found me talking to Kathryn about my daily commissions I stopped to chat. 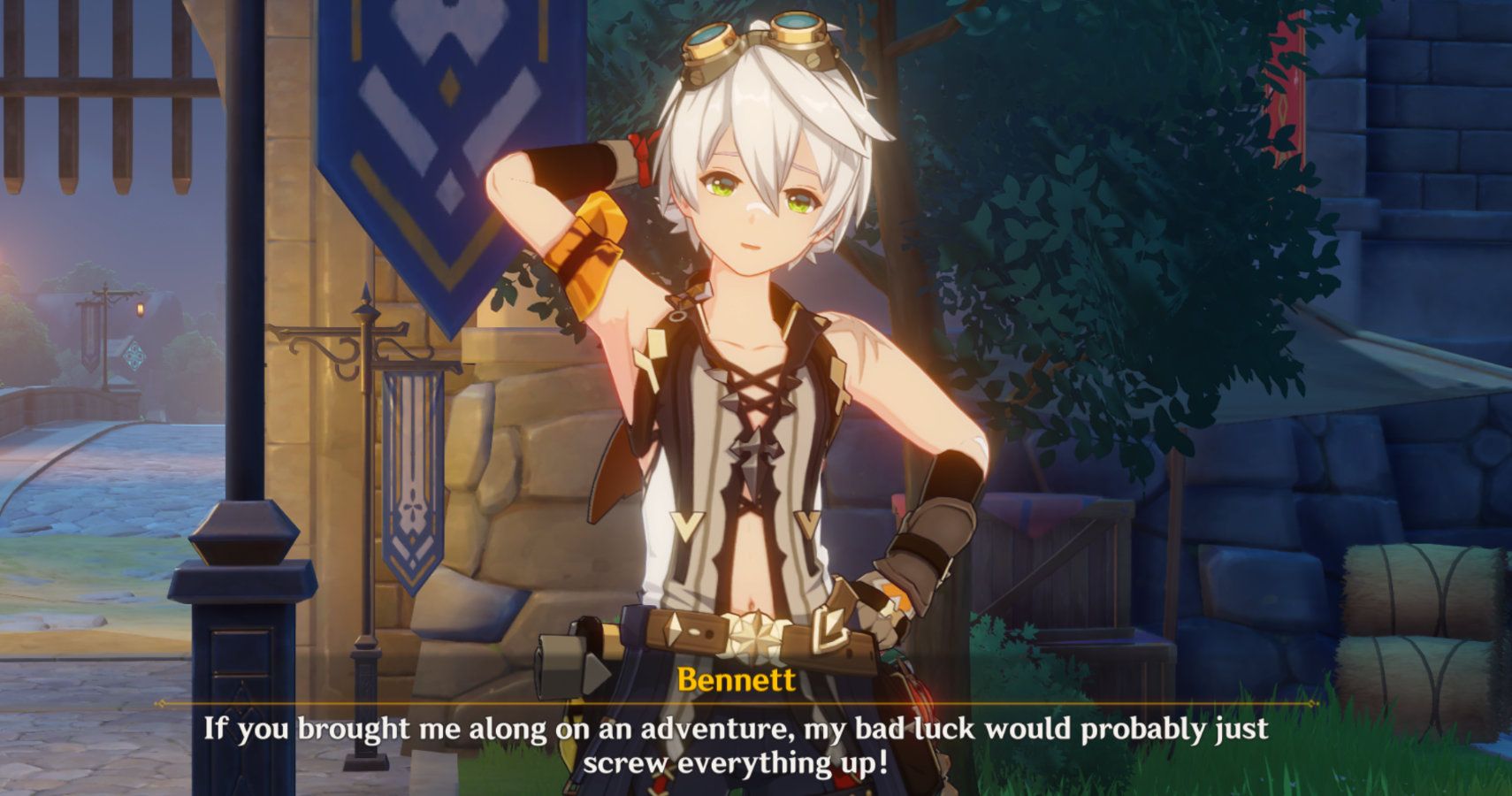 Turns out the guy may have a crush on me. He was very flustered as he began to talk about how awesome I am. I’ll admit, I was flattered. In a city full of heroes, who doesn’t want to be seen as the best? I mean I do get a little Mora chucked my way but rarely do I get actual praise for all the things I do day in and day out.

For instance, You’d think Flora would know by now that burying flowers in Dragon Spine just means they get dug up but apparently not. She keeps sending me time and time again to the same place and gets the same result. She always looks so disappointed as well, as if it’s all my fault. I’ve told her it’s futile but she just won’t listen. Anyway, back to Bennett.

The flattery is always appreciated and when he wanted to go on an adventure with me I didn’t hesitate to say yes. He even offered to cook us a meal and who doesn’t love a man who can cook? Since Paimon keeps telling me off for calling her emergency food, and I do share her love of snacks, I took him up on the offer and handed over the ingredients. 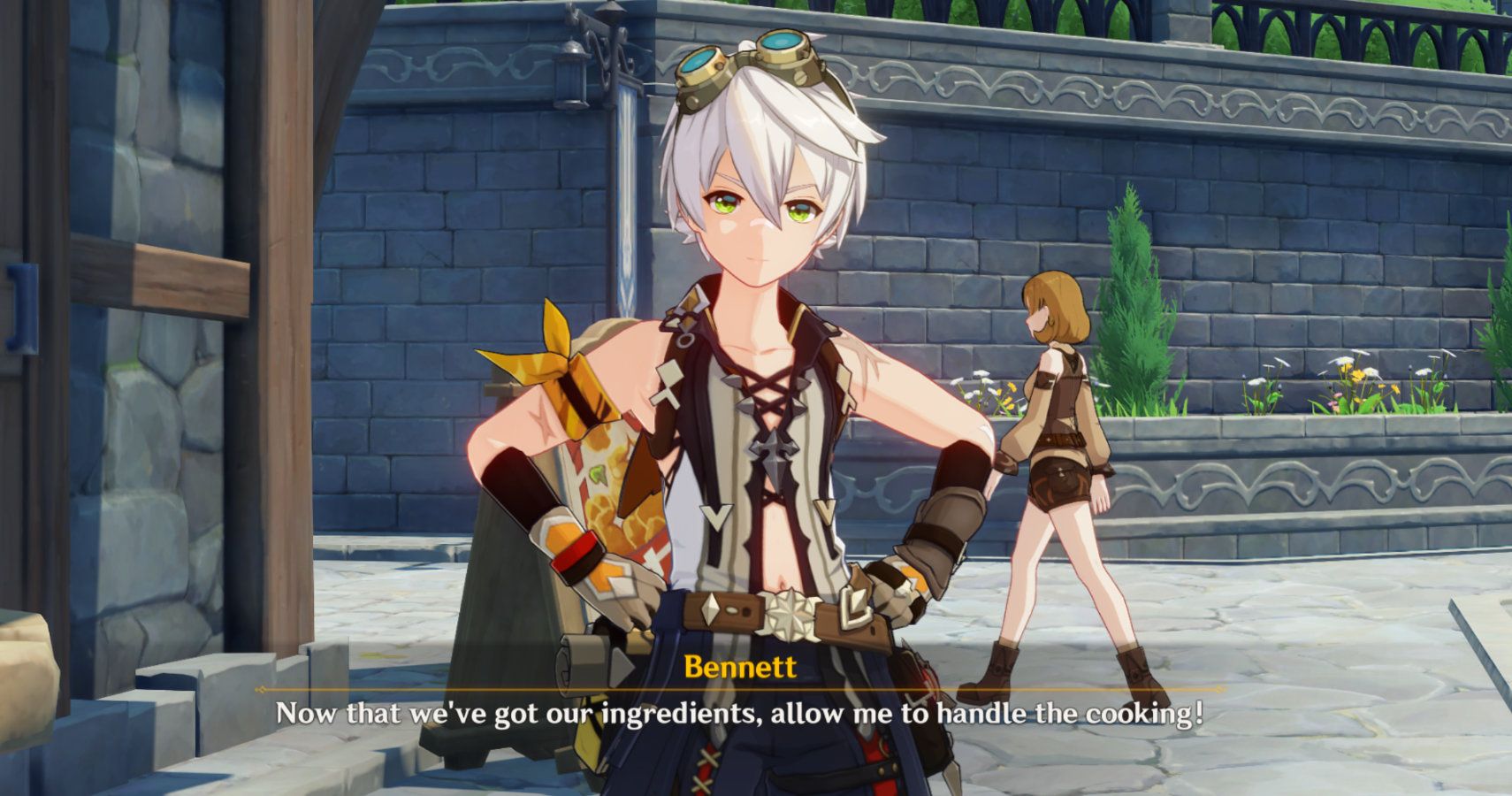 Once he’d cooked, I’ll admit my stomach lurched a little. The result didn’t exactly look appetizing but you can never tell. I once made a cake that basically disintegrated upon leaving the oven, but it still tasted amazing. Not wanting to hurt his feelings I suggested we take it with us.

We took off into a temple and within literal minutes Bennett managed to get us completely trapped. Still, I’m an experienced adventurer, the heroine of Mondstadt, and I’ve never before come across a temple puzzle I couldn’t solve. Until now.

Somehow Bennett’s infamous bad luck, which I’d put down to being a rumor, is not only true but it affects all those around him. At least, that’s what I was told by Royce, who we encountered while looking for an alternative exit. 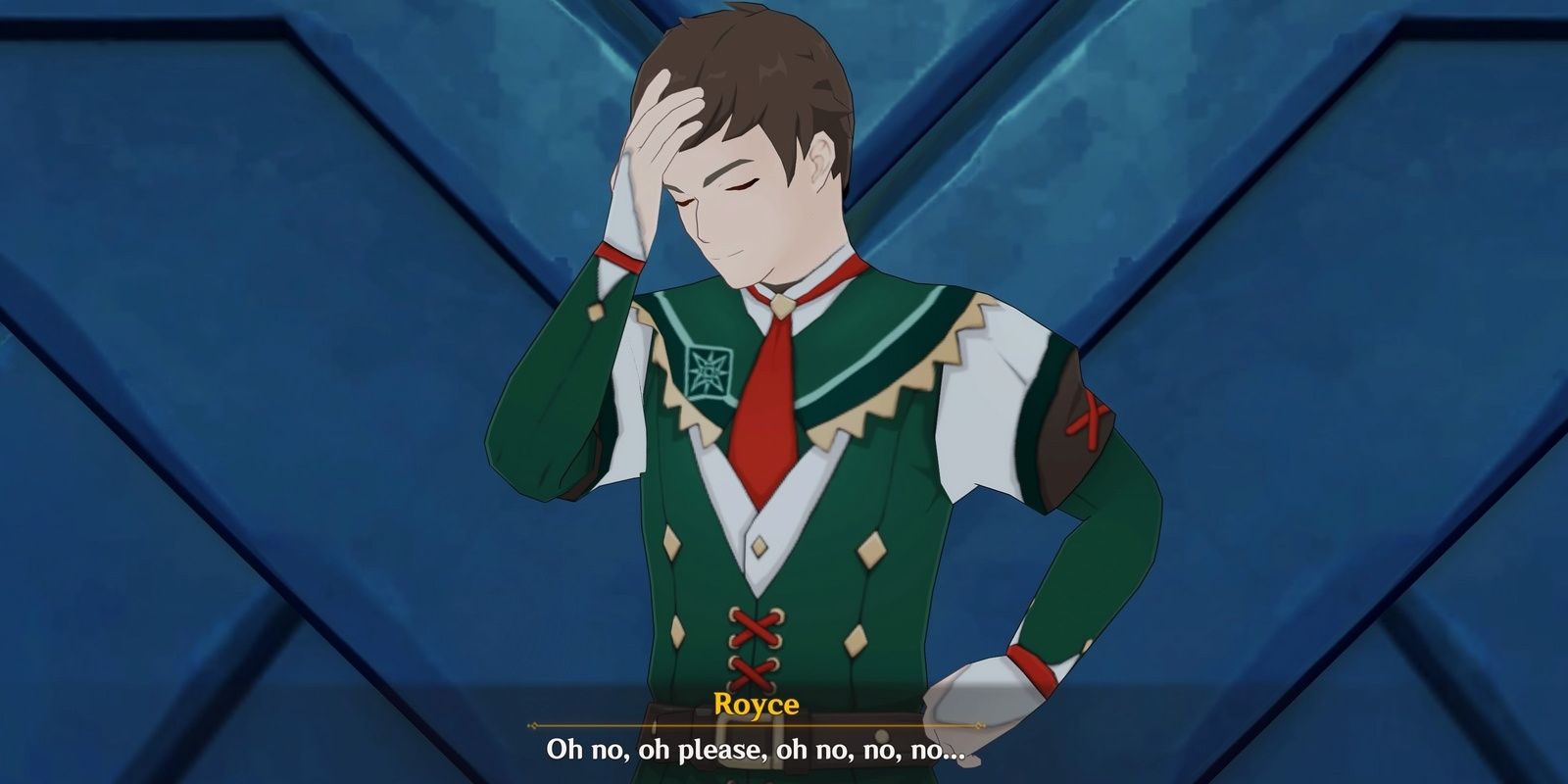 Royce is the kind of guy who will always find something to complain about. He was quick to blame Bennett for everything but we don’t know it wasn’t his fault. It’s just as likely he pressed a button somewhere else that meant we couldn’t get through the doors. After all, if he’s so smart how come he’s still here?

After telling us tales of how Bennett’s bad luck curses everyone he encounters, Royce suddenly pretty much demanded that we hand over some food. I wasn’t impressed with his attitude but I figured that realistically I wasn’t likely to be able to eat the suspicious dish Bennett had made and pretend it was nice. So, I told Bennett that it was his food and his choice.

Since Bennett still cares very much for his friend he handed it over. Then disaster struck. Royce sniffed it suspiciously before wolfing it down. Big mistake. As the last bit hit the back of his throat he just collapsed. I saw the wisp of a ghost come out of his mouth and just got the hell out of there. 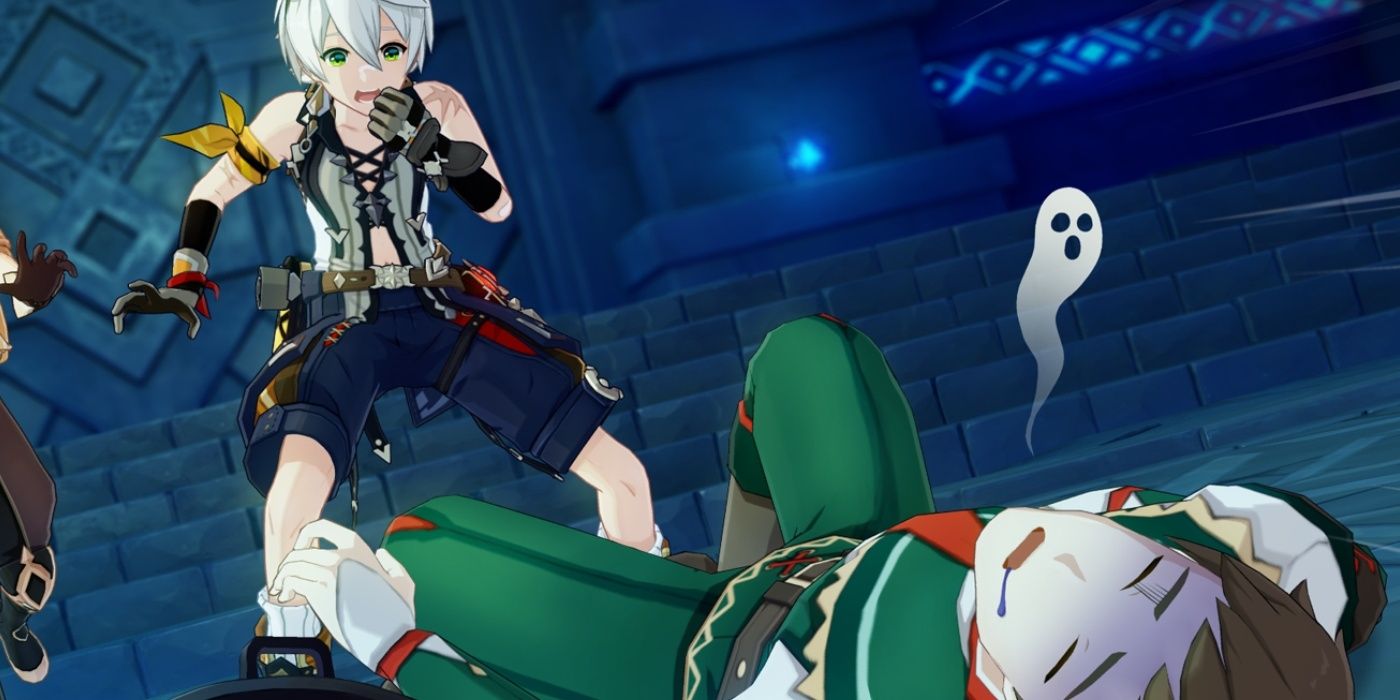 As we bailed Bennett did look a little guilty and told me it wasn’t my fault. When we finally got back to Mondstadt he called in the Knights of Favonius to help and thankfully kept my name out of it. Last I heard Royce was recovering and Bennett has sworn never to cook again.

As for me, well I heard Barbara is off in the woods hunting for Red Woolfhook berries and the other sisters are worried about her. It would be rude of me to leave her all alone out there, right? I mean there are all sorts of dangers in the forest and she’s a singer, not a fighter. Maybe I’ll be able to get a little closer to her without someone getting poisoned. I mean, what’s the worst that could happen? 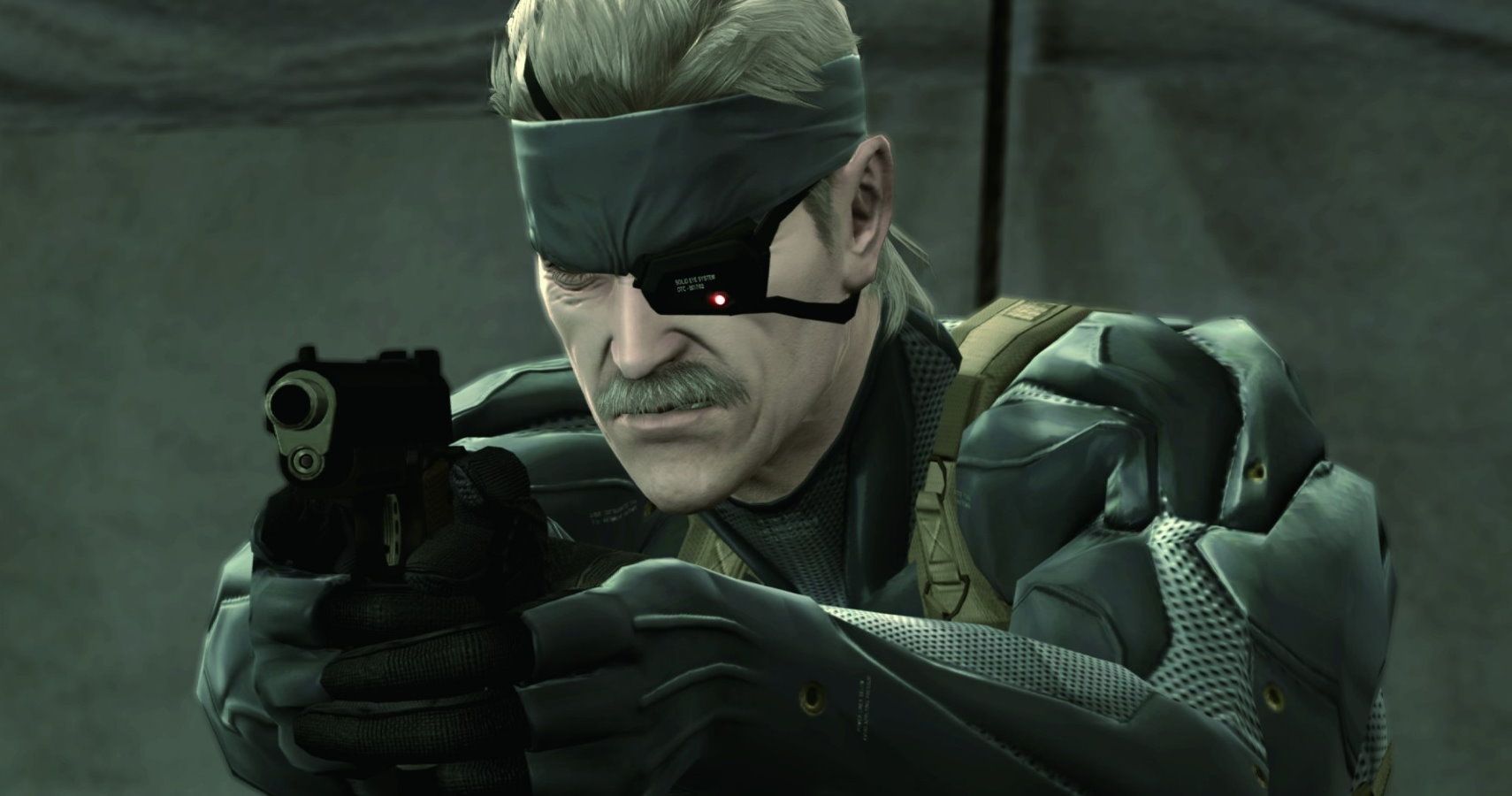 Helen began playing games at an early age with her first computer being a hand-me-down Sinclair ZX Spectrum. It didn’t put her off… She is all grown up now but is still a gamer at heart, especially when it comes to The Sims and other strategy and simulation games. She juggles the daily demands of life with a family and somehow still finds the time to indulge her two passions in life, writing and gaming; sometimes both at the same time.