Gods Will Fall begins with a revolt. Soured after countless years spent under the deific thumb of a cruel pantheon, ordinary people band together with crude axes and maces wrought of wonky iron and congealed blood, hacking and slashing their way through legions of vicious thralls. The single sentiment uniting this ragtag army is a conviction to break the gods one by one – these gods will fall. And yet these same gods, malevolent as they please, conjure a great and terrible storm to wipe out most of the resistance in one fell swoop. By the time the game actually begins, you’ve only got eight warriors left to work with, who somehow managed to survive the storm and swim ashore.

This is Gods Will Fall’s grubstaker. In an era of roguelikes and Soulslikes where innovation is the single means of deviating from an increasingly saturated formula, it’s important for games to carve out their own unique gimmicks, and to carve them well. In Gods Will Fall, your eight warriors all have their own randomized weapons, stats, and relationships. When I lost a warrior named Desmond to Osseus, the spindly spider god that looks a bit like the Prophet of Truth from Halo, his friend Dearg went apeshit. Desmond, you see, was the one who had pulled Dearg out from the seaborne debris, saving his life and giving him one last chance at destroying the gods who had treated him with such intense cruelty. And so, with Desmond imprisoned in some sort of sacred spiderweb, Dearg’s strength and vigour have become almost godly themselves.

These relationships are arbitrarily-drawn in each individual run – if you fail, your next crew of eight will be another set of survivors, completely independent of the last one. As well as having established relationships with one another, characters also have their own personal qualms with the gods. Maybe Etain has had nightmares about Carnoccus’ gate, and will be struck with unconquerable fear as soon as she locks eyes with it – or maybe she lost a brother to Krannus, and, as soon as she comes within range of long-coveted vengeance, she’ll receive a vast surge of newfound strength. 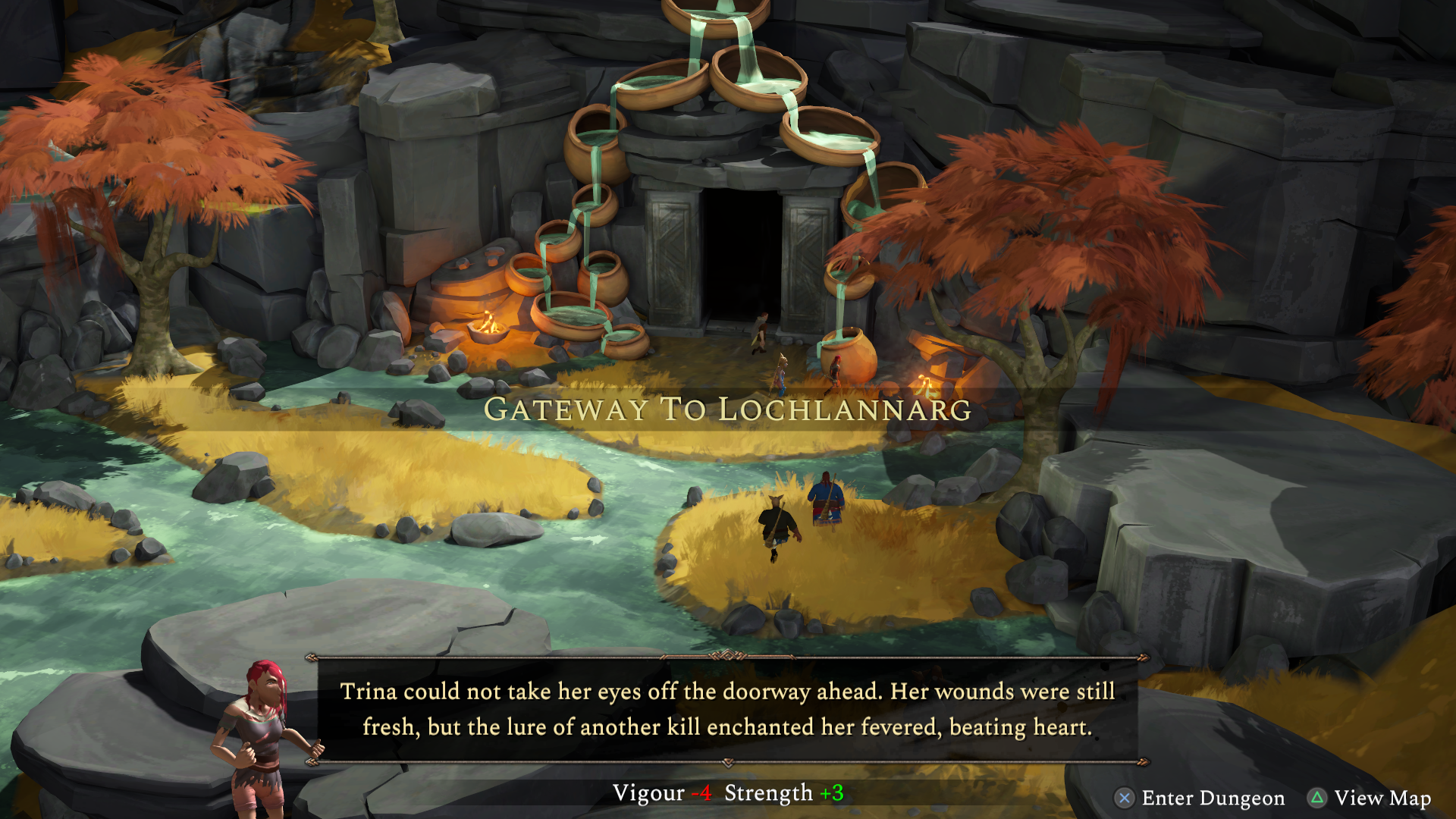 This whole system functions brilliantly. It reminds me of what makes the best roguelikes good in the first place, that willingness to really lean into what makes them separate from the rest. But Gods Will Fall, while relatively novel, plummets far faster and harder than the ten deities it contains. It’s an unfortunately apt case of having so many minor incongruences that it becomes utterly impossible for it to reach a state of cohesion.

As mentioned above, the ideas pertaining to emergent storytelling among each new wave of beached warriors are fascinating. I’d also like to state that the aesthetic is immensely tasteful – characters look like they’ve been lifted from an uprezzed Old School RuneScape, and roam across a lush island stitched together with sharp contours and warm pastels. Each individual dungeon, designed to be coherent with the god at the end of it, is striking: Morrigan the crow perches atop a craggy mountaintop, only reachable via bridges bordered by stupendous swords, while the leech-tongued Ogmios has eschewed his psychopomp duties to lick up some sort of unknowably deific slop.

All of this is excellent, but it recognizes this about itself far too infrequently. If you wander into Osseus’ lair, for instance, which is the closest one to the beach, you’re just as likely to get smacked by a wet tissue as you are a cinder block. Difficulty is randomized with each individual run, meaning that you have no way of knowing whether Boadannu is going to go down in three hits or 30 until after you’ve already entered their domain. This lack of signposting adds a layer of mystery to the game, but this is soon overwhelmed by misery – with ten different gods, unarticulated difficulty beckons far too many permutations that make your death a near-certainty.

Admittedly, this is intriguing in some ways. It means that the first dungeon you enter is a gamble, and if you happen to take on one of this run’s designated difficult ones and lose someone, you’ll need to decide whether to leave it for later, when you’re more powerful, or to persevere in order to retrieve your defeated comrades from their thrall. 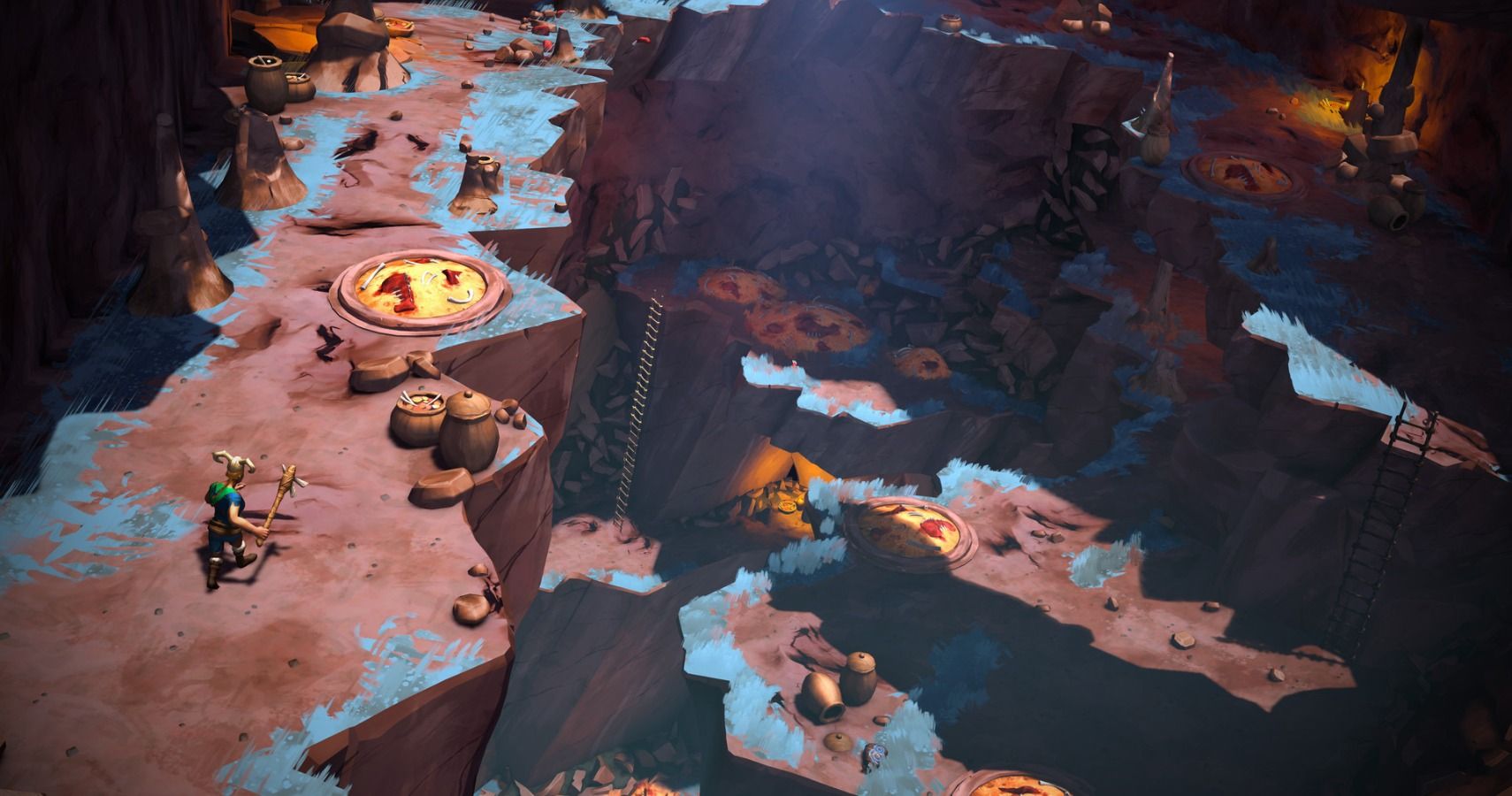 But most of the time it’s just needlessly frustrating. Each dungeon is already so unique that it seems perfectly reasonable for Osseus to be clearly marked as three stars on this run. Morrigan is one star – that’s where we’ll start this time around. You’ve fallen? Belenos is the easy one now – but he’s one of the most unforgiving bosses, so actually two-star Ogmios is a much better place to start. This offers the same kind of risk/reward structure, but it’s much fairer – if anything, it substitutes luck for strategy, and amplifies the game’s cleverer parts instead of actively silencing them for no discernible reason.

The level design also does itself precious few favours. While I complimented the style earlier, the actual structure of each dungeon is deeply flawed. I was constantly baffled by the strange decision to include platforming sections without the mechanics needed to justify them. You have a short dash and a standard jump at your disposal, and yet platforms are separated by weird gaps almost entirely for the sake of it. Due to the unresponsive nature of certain surfaces and edges that don’t appear to have been designed with platforming in mind, stupid deaths happen at least once a run. I had my best warrior fall off the side of a moving anvil about 30 seconds away from Morrigan’s boss arena, and I still can’t understand why anybody thought it was useful to put it there. This is a roguelike about hack-and-slash combat – half-baked platforming does nothing but inhibit it. 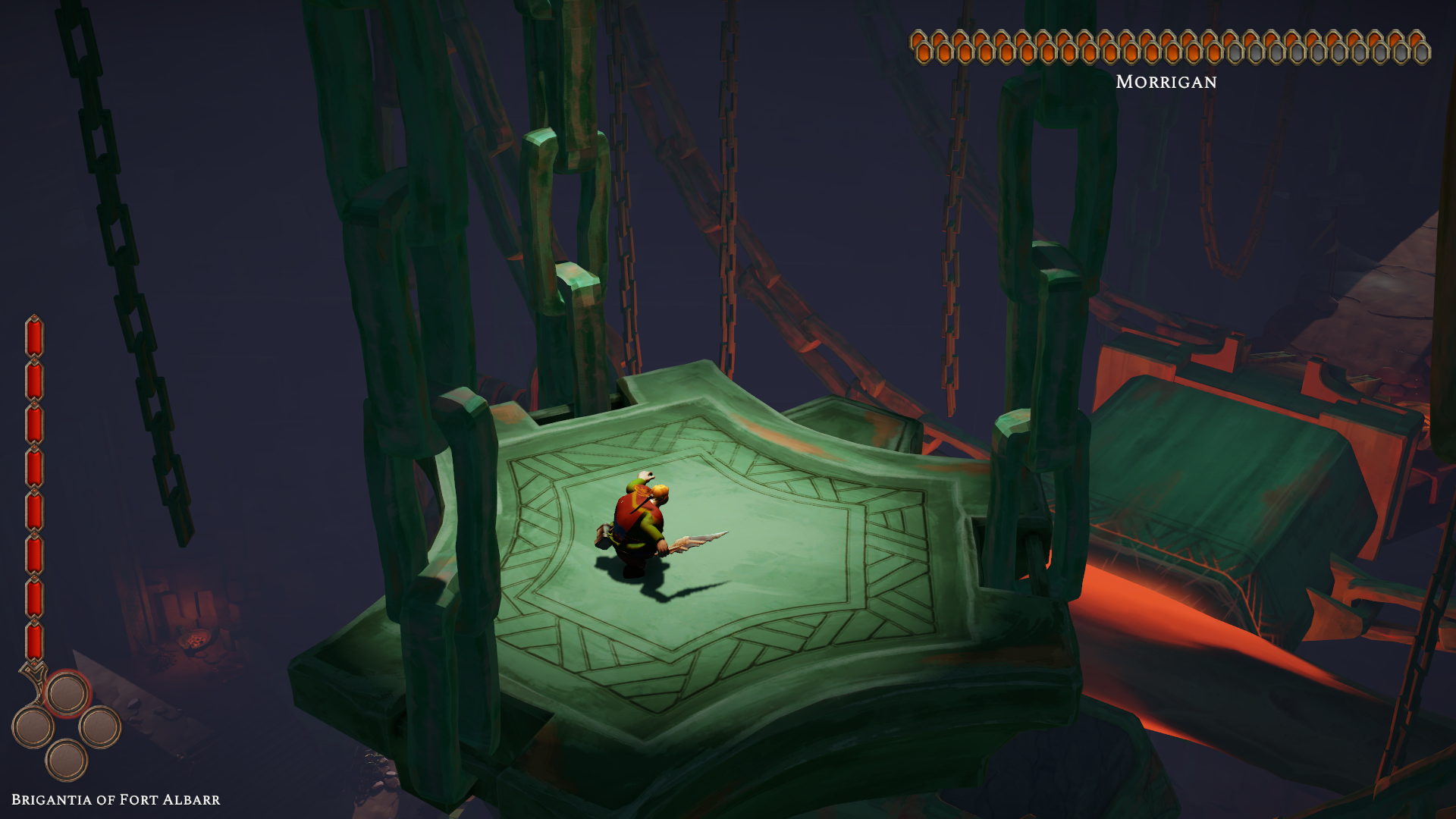 This is a shame, because the combat is quite intriguing. It seems basic at the start, but its Roar mechanic resembles Bloodborne’s rally – stay on the offensive and you’ll build up adrenaline, which can then be funneled into regenerating your own health. Each weapon has its own speed and weight – twin maces are lightning quick, but the slow and methodical descent of a two-handed axe is enough to clobber an armored enemy on contact. You can also parry your opponents, gaining a massive Bloodlust boost – which allows you to elicit the aforementioned Roar – and opening them up to a fatal follow-up attack. I personally found the parry a little bit too directionally precise with analogs, but it was a bit easier to execute with WASD. The issue in that case was different – namely, that PC appears to support keyboard, but not keyboard and mouse. Using J, K, and L for light attack, heavy attack, and dash, respectively, instead of left-mouse, right-mouse, and mouse button 2 is unintuitive and messy. As someone who often plays roguelikes with mouse and keyboard, I was astonished by the lack of remapping options.

There are real glimmers of greatness in Gods Will Fall. I love that all of the warriors cheer on their pal before they enter the dungeon, and that whoever’s been chosen to embark on their quest will turn around and do muscle poses, or hoist their spear over their head in uproarious acclamation. I love that the camerawork is so finely directed that the perspective will snap counter-clockwise at the exact moment it needs to for you to spot a ladder to the next platform. I love that the Munloch Well, located in between four brutal god dungeons, allows you to magically pass items on to whatever future band of survivors washes up on shore to succeed you, the only action capable of ostensibly connecting each run to one another. 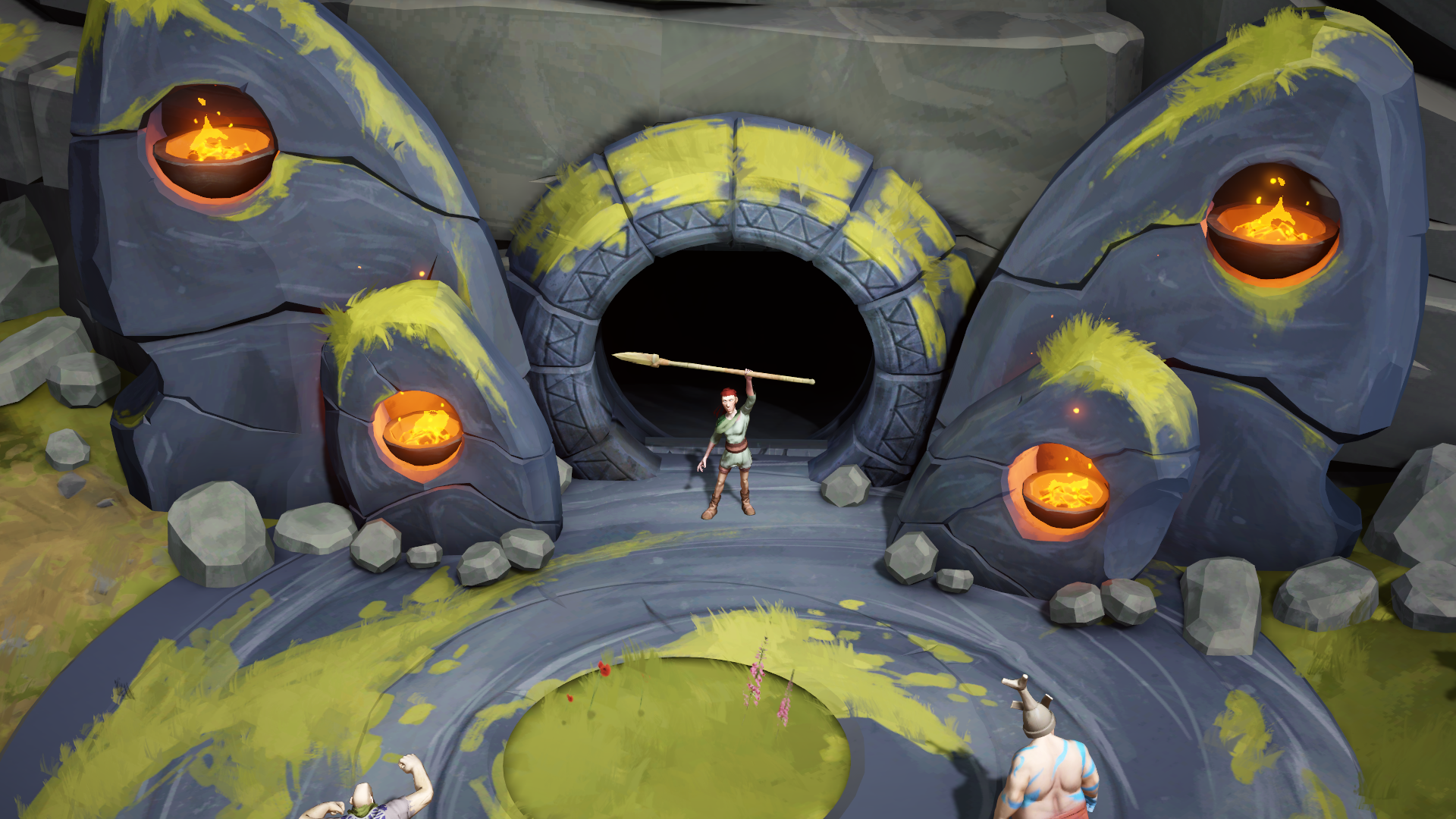 But, on top of all of the issues mentioned above, I was annoyed by the opacity of the “Read scroll” action in the bottom-right corner of the screen, which is near-impossible to see, let alone read and parse. I was frustrated that i-frames didn’t always make me invulnerable, making a successful parry an invitation for enemies to whale on me instead of something that deserved a reward. And each time I sent someone into a dungeon, I thought, “Why are they going in alone?” I get it, that this is for the game’s own mechanical integrity, and that you can explain it by saying that only a single champion can confront the gods. But it still seems ridiculous. The whole premise of the game is that these people are in open revolt, so damn the gods and their rules. If there are eight of us, we should storm the burning fields of Belenos together. There’s no attempt made to reconcile this with logic.

The last dungeon I played through was Lochlannarg’s. I had already beaten two gods and, fortunately, Lochlannarg appeared to have drawn the short straw – his health bar only had three units, meaning that three quick smacks at the beginning of the fight would send him straight to God Hell. 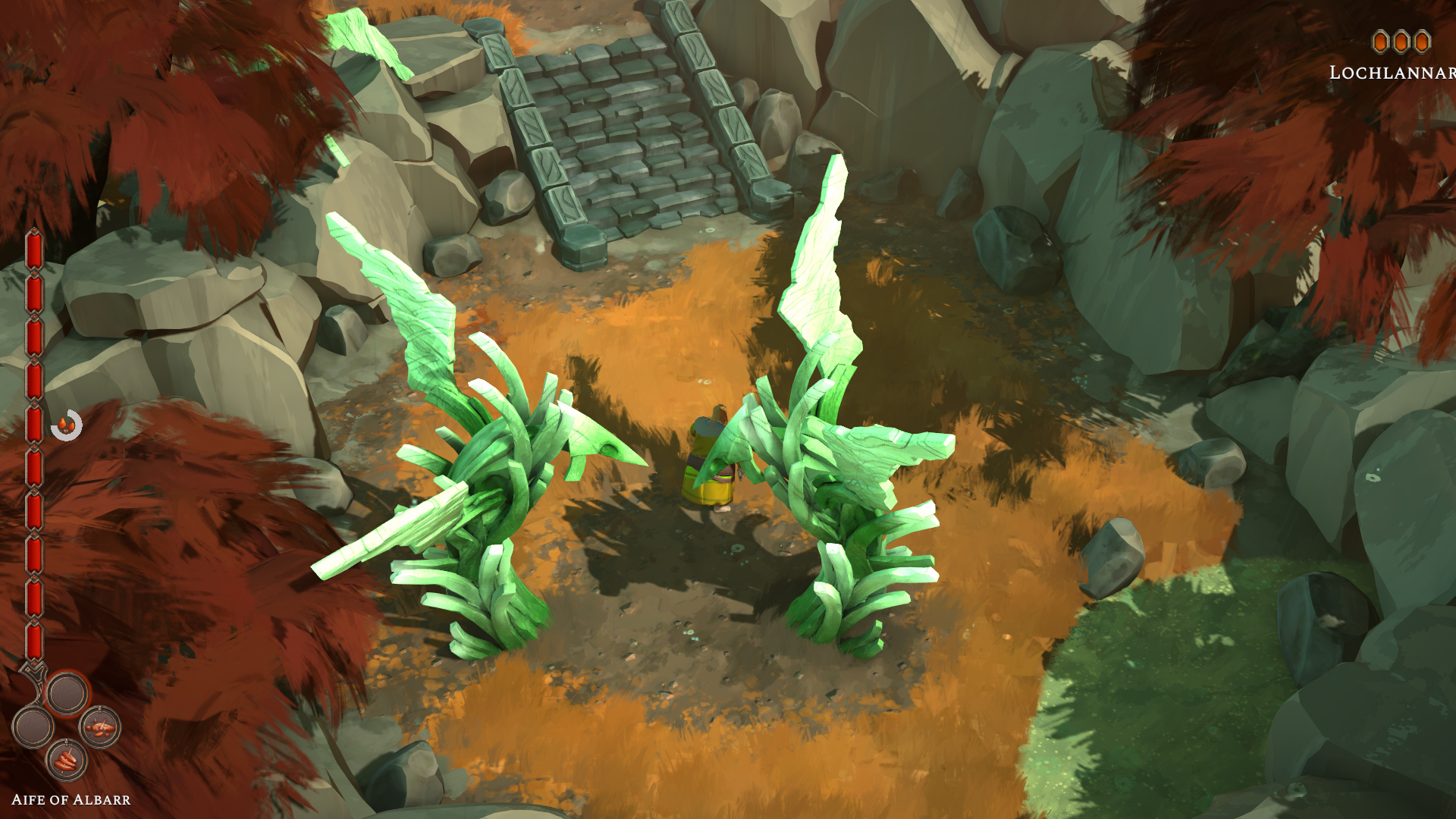 I sent in my best warrior and the screen froze. Not a full crash, mind. I could still access the pause menu, but my character was stuck in place. Thinking it was a minor glitch, I chose to abandon my warrior, knowing full well that I would get them back as soon as I landed three simple hits on the boss waiting at the end of a very easy dungeon. So, I sent in another warrior, and, once again, they froze. After my third character stopped dead – they froze in different areas, by the way – I rebooted the game. When the fourth character got stuck, I couldn’t help but see it as an analogy for what this game is in its present state: a gorgeous and clever concept that just… doesn’t work.

With some godly patchwork, Gods Will Fall could reach new heights. As it stands, though, it falls long before its eponymous gods ever truly have a chance to.

Next: After 22 Years, Someone Has Finally Caught Suicune In The Pokemon Anime – And It Wasn’t Ash 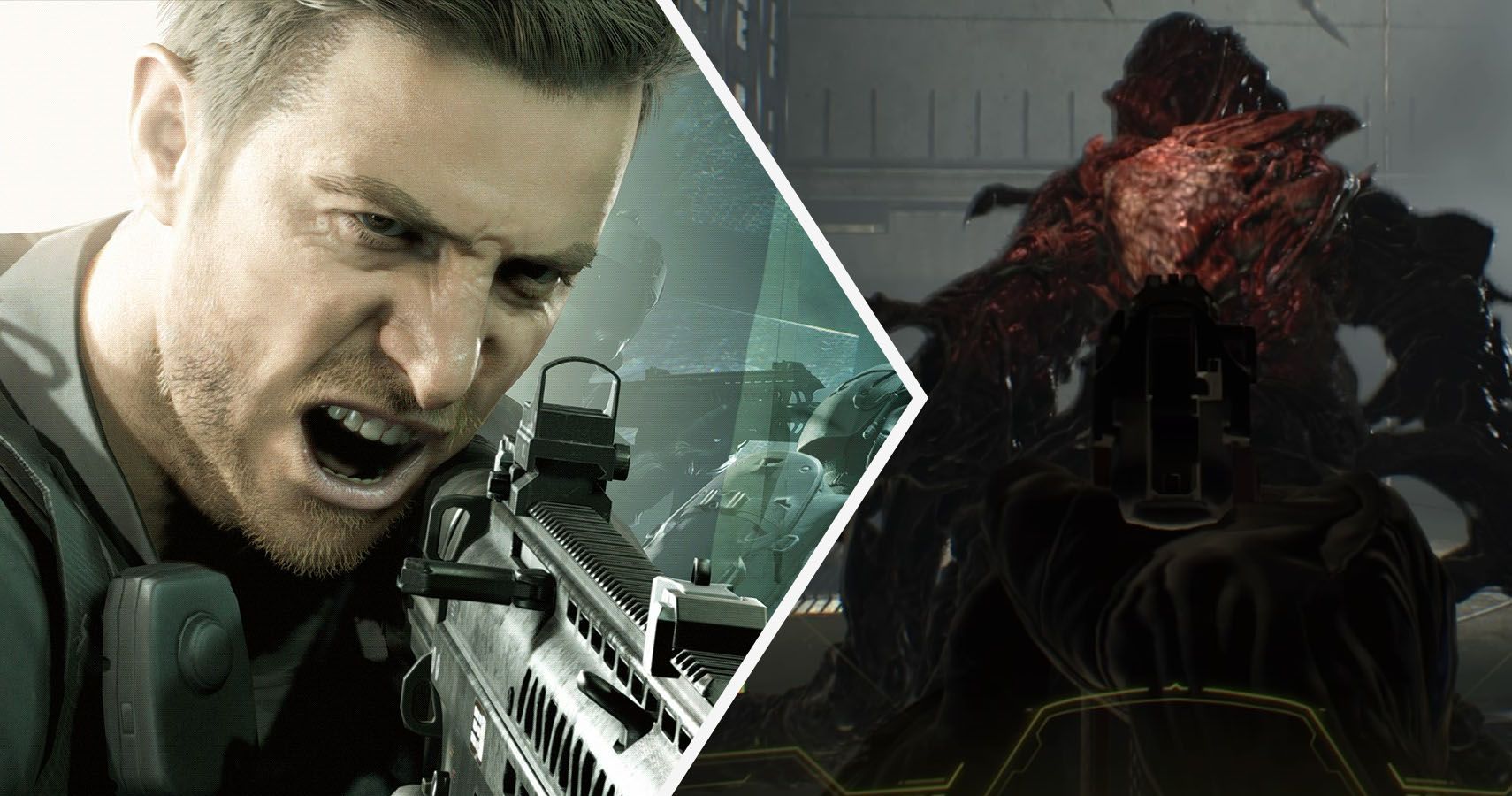