Horizon Forbidden West Might Be Bringing Back The Shadow Carja, Which Makes A Lot Of Sense

Yesterday, we got to see 14 minutes of Horizon Forbidden West gameplay. It’s strikingly similar to the functionality we saw in Zero Dawn, except it looks significantly bigger and bolder than before. The UI has been overhauled, the landscapes have been verticalized and filled out, and the traversal looks remarkably better than that of its predecessor. In between all the bells and whistles though, beneath the shiny embellishments designed to elicit concerts of “oohs” and “ahhs” from the crowd, I noticed a detail that gave me cause to don my cleverest, most big brain thinking cap for a minute – was that the Shadow Carja on that great, big, machinated Haradrim oliphaunt?

Personally, I think it was. Not only was the gear similar in colour to Zero Dawn’s primary antagonistic force – the whole style was the same, from the sun visor to the pointed design of the light armour. I have been convinced that the Shadow Carja would appear in Forbidden West ever since I finished Zero Dawn and The Frozen Wilds, and so I thought I was self-actualizing a sense of wish fulfillment last night. Looking at the trailer again today, though, with fresh eyes and a heavily caffeinated brain, the Shadow Carja’s presence in the Forbidden West makes more sense than ever before, and has a lot to say about narrative threads involving Sylens, the Old Ones, Hades, and Horizon as a whole.

In case your memory of Zero Dawn is a little bit hazy, here’s a very quick, potentially blunt description of the Shadow Carja. There was once a Sun-King called Jiran, right, and he decided that the machines were annoyed at humans because the Sun wasn’t being fed enough blood. So, he went to tribes all over the post-apocalyptic, technophilic-fantasized US of A and started rounding people up to be fed to the sun, human sacrifice style. Note that his Sun has a capital S and mine has a little one, because Jiran is a stupid fanatic and I have a brain. 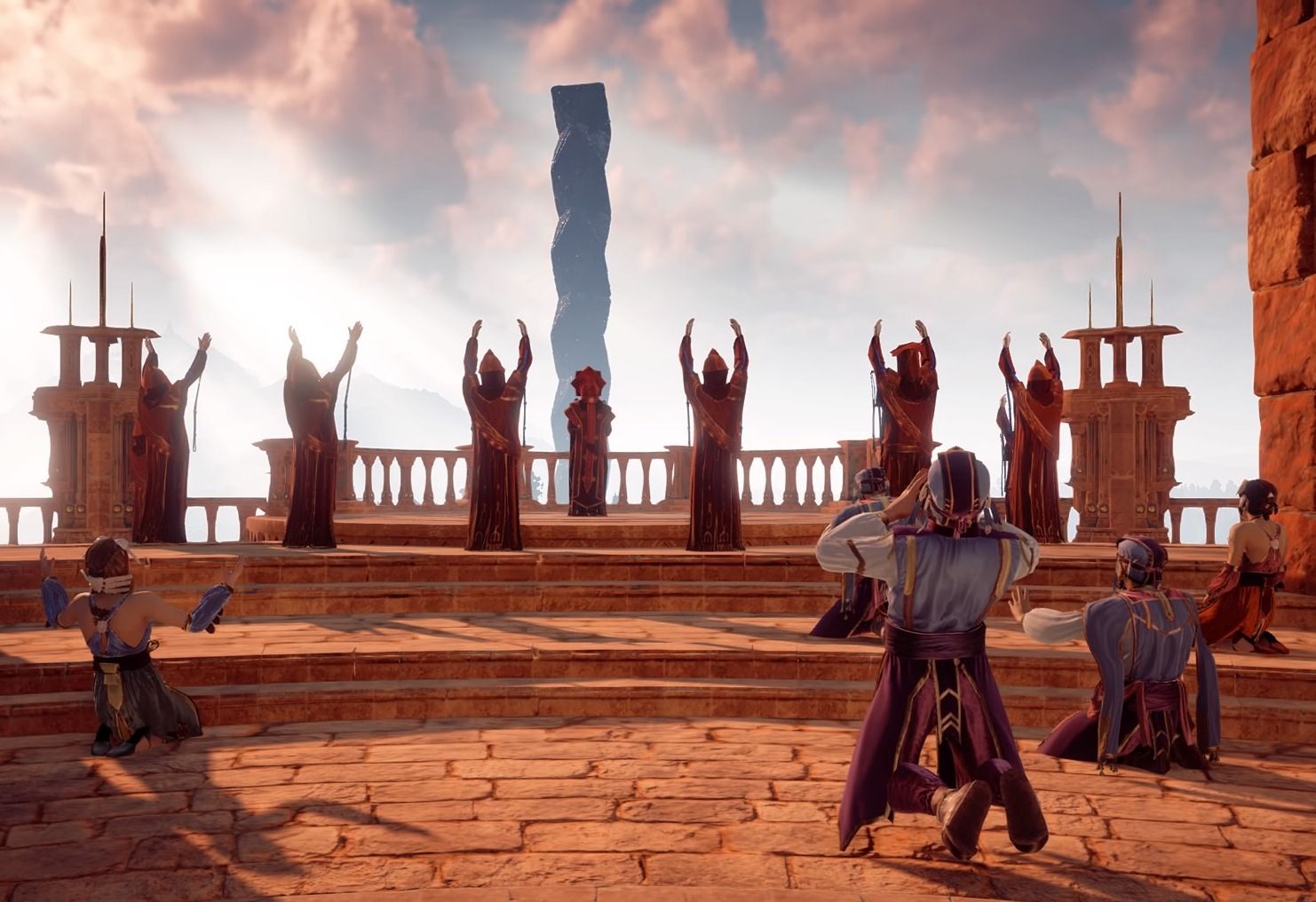 Avad, Jiran’s son, also had a brain, which is why he ended up killing his father and stopping the Carja’s infamous Red Raids. Devout fanatics who followed Jiran left their bigotry hub at Meridian and ran westward with their tails between their legs, eventually landing at Sunfall and renaming themselves as the Shadow Carja – how distinctly edgelord of you! This, reader, is the last beacon of human civilization before the Daunt, the treacherous precipice separating the map of Horizon Zero Dawn from – you guessed it – the Forbidden West.

In Zero Dawn, the Shadow Carja ally with Sylens in order to take back Meridian, although Sylens is never particularly devoted to this partnership. They’re tricked into believing that Hades, a subordinate control of the Gaia program that gains independent AI governance of itself, is a god called the Buried Shadow – yes, the ritual murderers worship a robot voice.

Anyway, Aloy squashes the Shadow Carja in Zero Dawn, as well as Sylens’ Eclipse cult within them. The thing is, there’s no way she got all of them – and do you know where the rest of the Shadow Carja are? Yep – the Forbidden West.

I know the ostensible antagonist for Forbidden West is Sylens, who, in the post-credit scene for Zero Dawn, captures Hades – now some weird liquid spirit – in a magic lantern like some sort of genie. However, we know Sylens is once again working with a shady organization in the selfish pursuit of knowledge, so it would make sense for him to ally with the exiled Shadow Carja, who left Meridian and Sunfall prior to Sylens betraying Eclipse. This also explains why the enemies in the trailer can tame machines – Sylens is able to create a Focus network for them, which I imagine gives Aloy a pretty enormous clue as to why so many people in the Forbidden West are knocking about on metal tigers, or whatever. 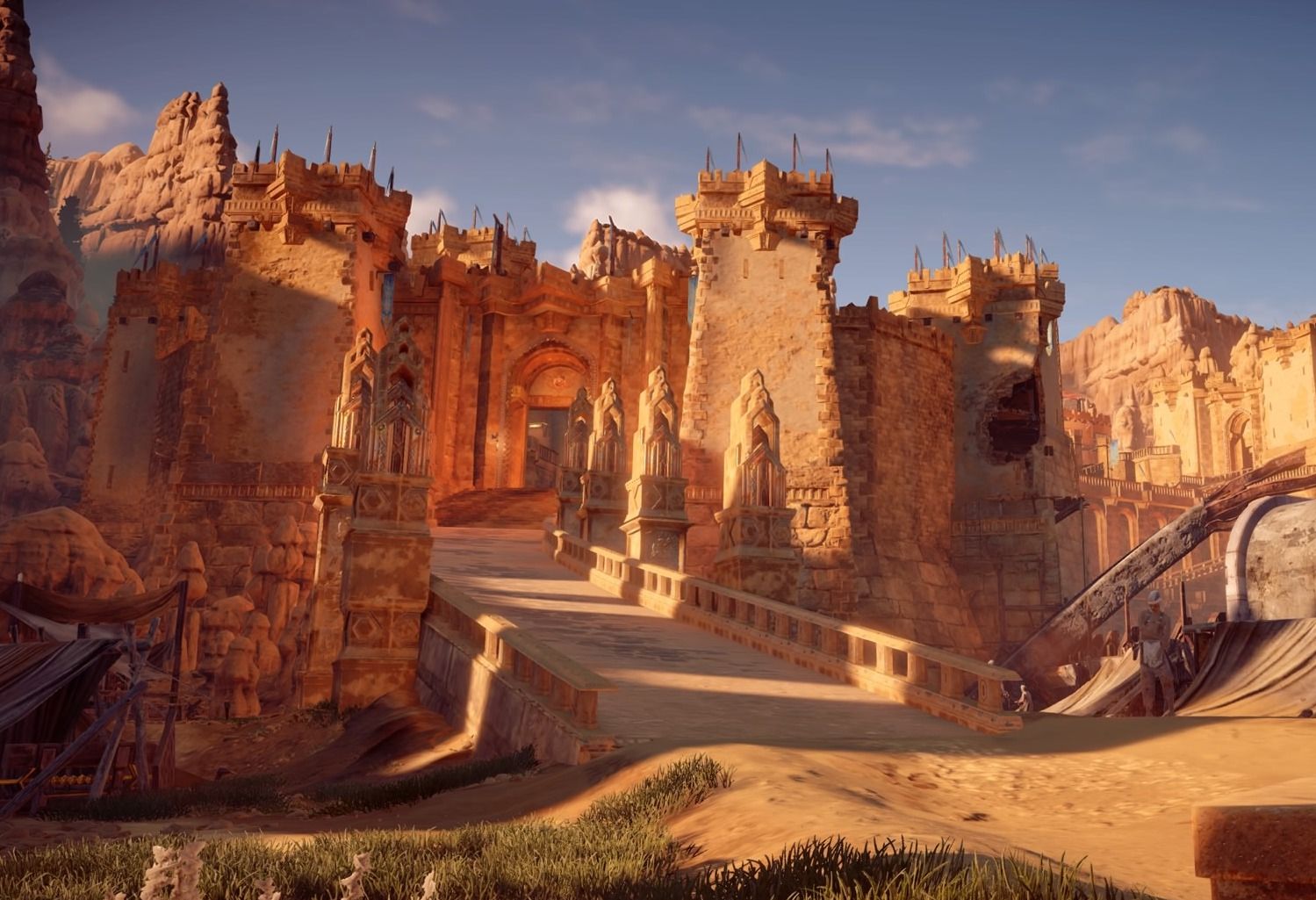 I mean, Sylens hates the Shadow Carja – but still, he’s willing to use anyone for his own personal gain. Maybe he’s not working with them – if so, though, he’ll be working against them. The fact is, a Shadow Carja priest in Zero Dawn specifically references the fact that some of their best and most devout practitioners crossed the Daunt after Jiran was killed. From their Shadow Carja outfits to their ability to control machines, to the pure fact that Shadow Carja in the Forbidden West are literally referred to in Zero Dawn, there’s no doubt in my mind that yesterday’s trailer has all but confirmed the resurgence of the antagonistic order we thought we’d already kicked around. That’s before even mentioning that at the end of The Frozen Wilds we learn about Hephaestus escaping and building an entire legion of human-hunting machines. For Sylens? Nah, he just wants knowledge. It’s the Shadow Carja, who will once again fall under the whims of a malevolent subordinate program of Gaia and almost wipe out the world out of sheer narcissistic ignorance. The lore literally says Iriv, the sixth Sun-King, made it all the way to the Forbidden West and never came back – there’s an entire alternate Sundom over the Daunt! And, judging by the machines they’ve dealt with so far – which almost definitely includes machine sharks – they’re probably going to be way tougher than Jiran’s pathetic lackeys. Plus, Basadid, a Sun-King after Iriv, said the Forbidden West was off-limits and where “only the Sun may go.” That’s just baid for unexamined religious fundamentalism, I reckon.

“All forces must combine, all halves of nature joined to one cause,” Helis, Jiran’s absolutely berserk right-hand man says in Zero Dawn. “Shadow to Sun, Night to Day. Even a Buried Shadow wants the wheel to turn. For without a Sun in the sky, there can be no shadow.”

I’m telling you. The only thing left for the Shadow Carja to do is push further west until it hits the Forbidden West. Hopefully they won’t be an absolute bore to fight this time around – I was hoping for more Snapjaws and Rockbreakers, if I’m honest.