In January 2019, Destiny 2 saw its most controversial event to date. Niobe Labs tore the community in two with a fantastic but frustrating puzzle. A year later, players discovered a new puzzle in the Corridors of Time — one that makes Niobe Labs look easy by comparison. The Corridors of Time puzzle took the entire community six days to solve, and left plenty of players feeling unrewarded after a herculean effort.

Here’s the story of the Corridors of Time, and how it brought the Destiny community together.

How the Corridors of Time worked

When the Corridors of Time opened on Jan. 14, players were free to move around inside for the first time — after briefly visiting the mysterious location for story quests earlier in the season. The Corridors of Time was an all-white space with a door that connects to a large, hexagonal room. (It’s no longer accessible in the game; Bungie removed it at the end of January.) 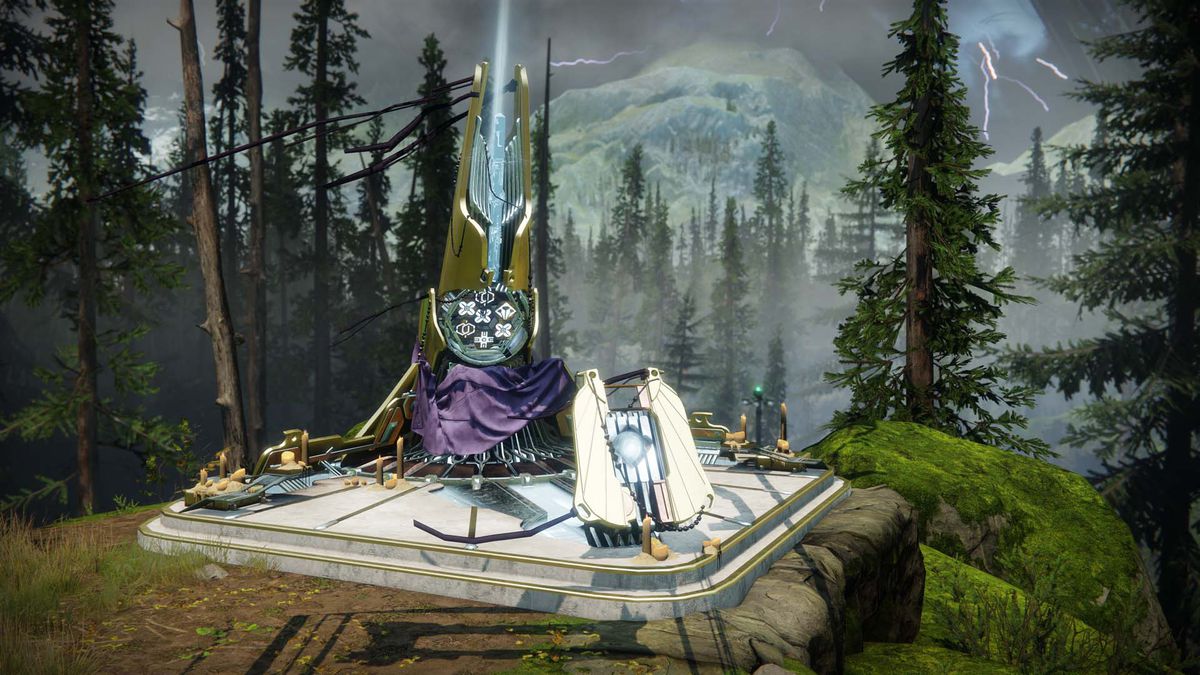 The circle in the middle of the Obelisk would shift codes every hour
Image: Bungie

For example, the code on this Obelisk turned out to be code four. 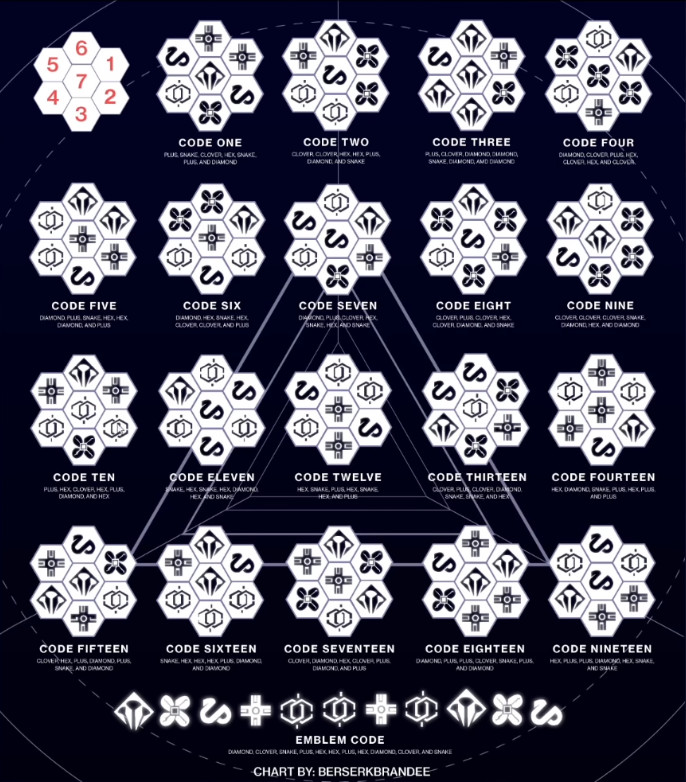 Look at code four on the chart — it matches the Obelisk above
Image: Berserkbrandee via Teawrex

In this more organized chart, you can see code four in the corner, and it translates to: Diamond, Clover, Plus, Hex, Clover, Hex, Clover when read correctly.

Inside the Corridors of Time, players physically ran through doors matching these symbols in specific order. After the seventh door, players came across a new kind of room: the Timelost Vault.

Inside the Vault, players found a large, circular room, with a gravestone in the center (seen in the Tweet above), and a glass floor around it. Approaching the gravestone only teleported players back to the start of the Corridors, but if players interacted with the floor, they earned a new piece of lore and the floor showed them a Timelost Vault code.

This Timelost Vault code was key to solving the first section of the puzzle, and would go on to help solve the much bigger second puzzle later in the week. Each hour brought a new Obelisk code, and new visit to the Timelost Vault for some lore and an additional Vault code.

Players were moving as fast as they could, but the one-hour time limit on codes required patience. It would take 19 hours for the Obelisks to reveal every path. While players waited for more codes, they started to fit the ones they already had together. 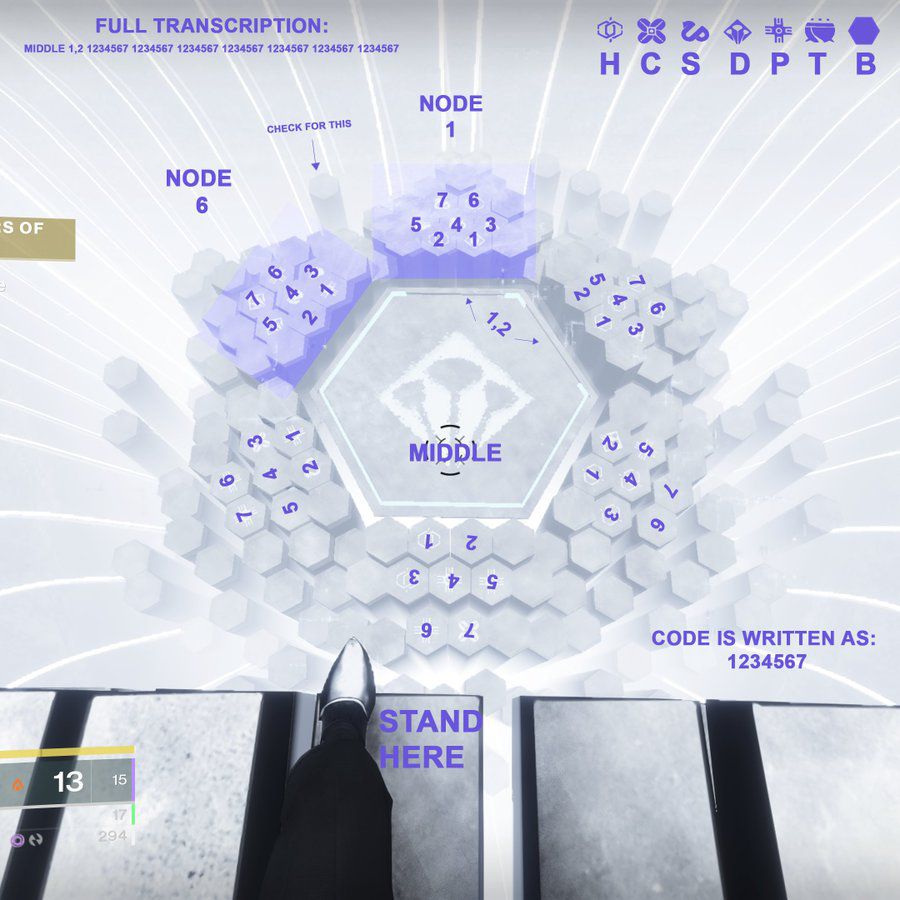 Each Timelost Vault code had a single symbol in the middle, surrounded by six sides of codes. Then each side had its own seven-digit code, which either did or did not match another Timelost Vault code. On the inner symbol, there were what look like walls surrounding open areas (the white lines in the image above). Players marked openings where walls were absent. 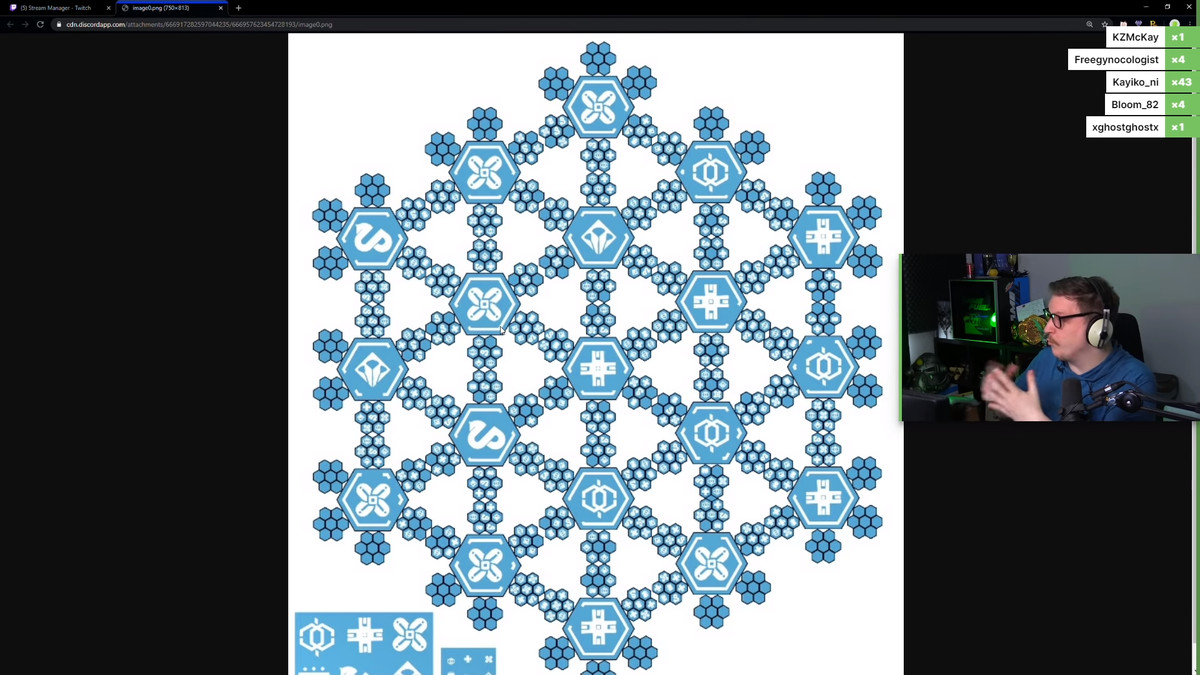 A hex made up of all 19 Timelost Vault symbols
Image: TheTeawrex

These detailed codes led to a new format. Each Timelost Vault code looked like a snowflake, and by attaching one code to another via matching outer hexagons, players built an incredible maze. In the image above, you can see the way the nodes fit together by looking at the six smaller hexagons attached to each symbol — they mirror each other like dominoes. 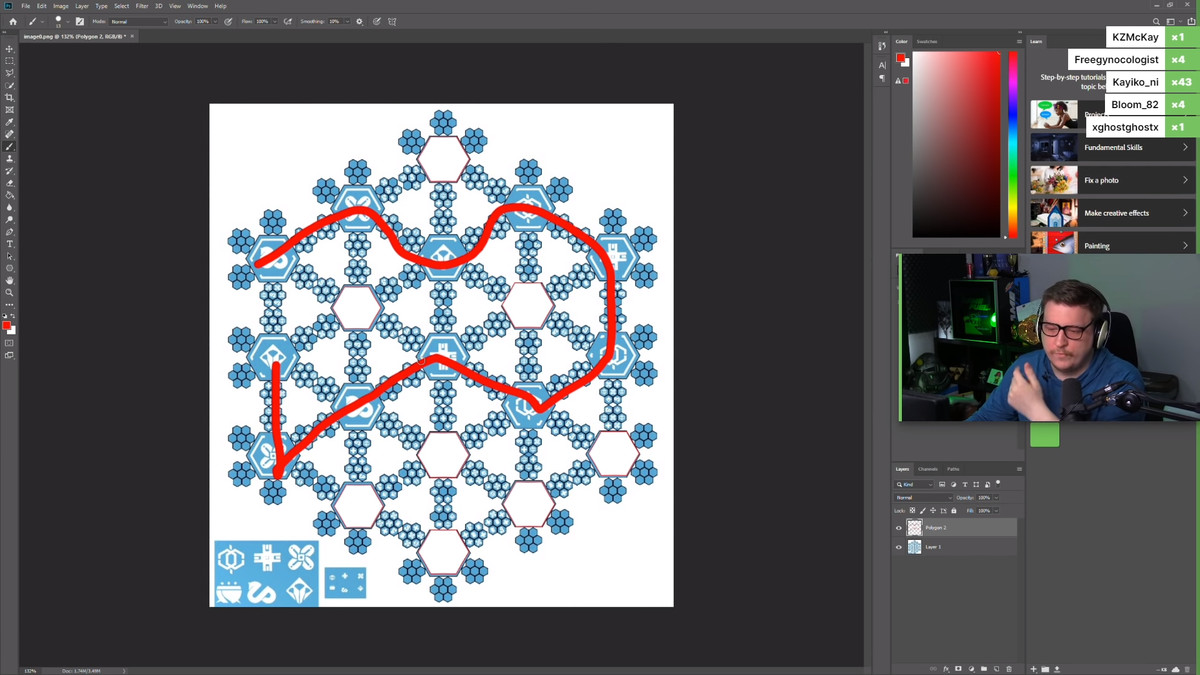 “Who cares about chances when thousands of people in the Destiny community were able to find our huge path we’d been waiting all day for, with over one thousand possibilities remaining in only, you know, 20 minutes!” evenf1997 exclaimed in his mini-documentary on the Corridors of Time (seen below).

Once players found all 19 codes, they verified the nexus code via the pathway in the maze (seen in the image above). The nexus code is the only way to get in and out of maze made by all the previous Vault codes.

Inside the nexus, it looked just like another Timelost Vault, and approaching the tomb still resulted in teleporting back to the start. The puzzle wasn’t done yet. Players interacted with the floor again, earned a new in-game emblem, and saw yet another Timelost Vault code. But this one was different. Every player in every nexus saw a different code. And thus began the process of collecting all the new codes into a single document, which would take the community another five days to complete.

With the second phase of the puzzle, players already knew exactly what to do — repeat the steps above on a much larger scale. The trouble of phase two was collecting and organizing the data. This new maze wouldn’t be 19 codes put together, it would be 4,941 codes.

The Raid Secrets Discord and Reddit assigned interested players and prominent streamers the job of organizing the data. And one Discord became the dumping ground for thousands of nexus floor images from community members.

Players created a giant spreadsheet with thousands of cells, each data point manually filled by one of the data organizers. User TJ09 took the data in the spreadsheet and built a program to map all of the codes together, creating the physical manifestation of a giant maze — just like the blue snowflake map above, but with the connecting codes hidden for clarity. 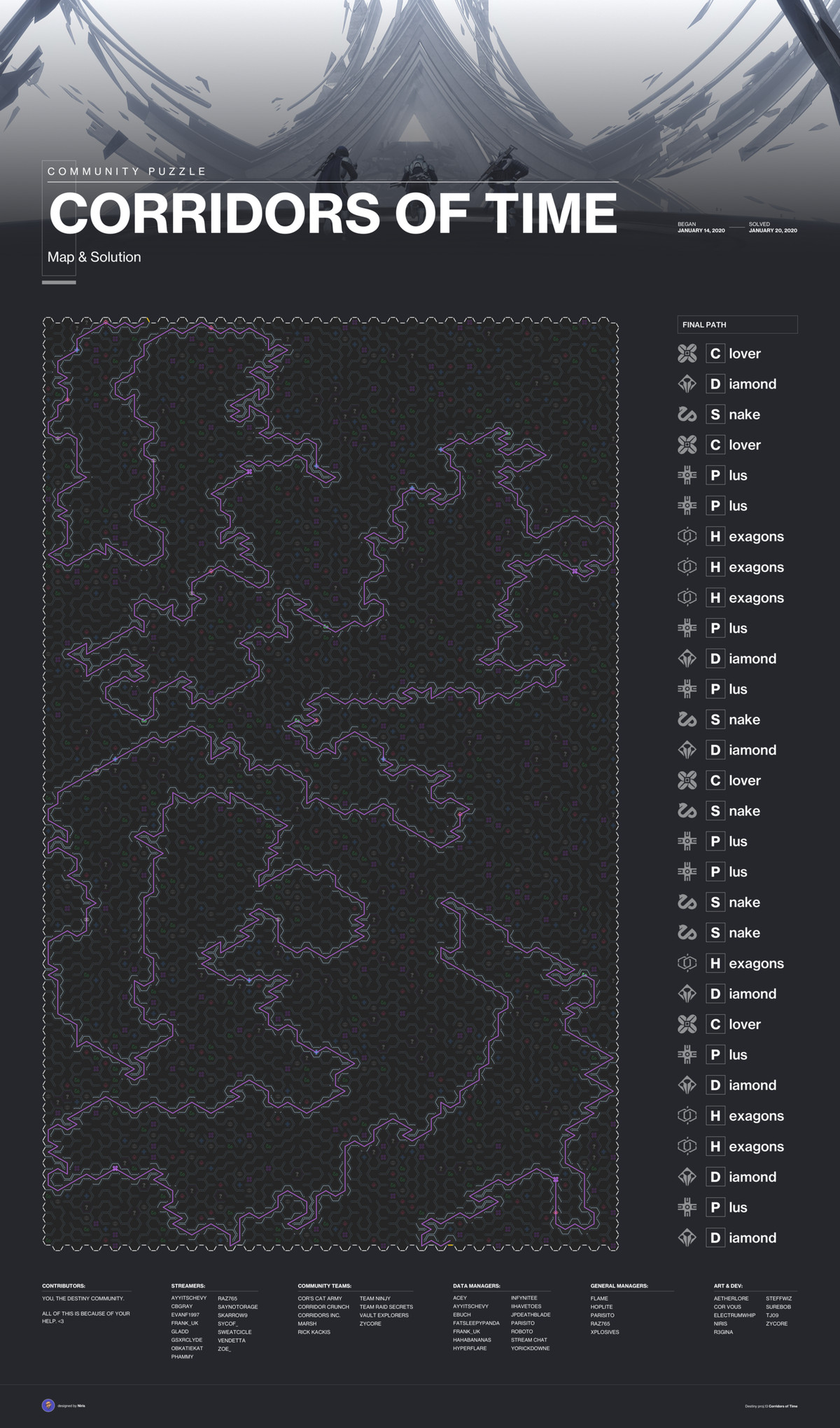 This entire map represents all the data nodes players fit together, and the path through the maze
Image: Mr_Niris

Five days after the start of phase two, on the morning of Jan. 20, players finished gathering the community images into a single maze, and found a path through the weeklong sea of data.

But expectation failed to meet reality. Players followed the new code through the maze — 30 symbols long. At the end, they approached the tomb, learned that it belonged to the Destiny player character sometime in the future, and received a new Exotic quest item.

While many players expected the return of the original Destiny’s Exotic swords (due to the sword embedded in the Corridors of Time tomb), the puzzle unlocked an already-announced Exotic quest a week early: Bastion, the Exotic fusion rifle. Using the Corridors, players had “gone into the future” to start the quest early.

The reward disappointed fans — many felt teased by the sword and frustrated that it was an Exotic they already knew about. But some players and streamers like Gladd and SayNoToRage claimed to enjoy the journey more than the reward.

The process of unlocking the Corridors of Time puzzle put Niobe Labs to shame. Sweatcicle played a sea shanty. SayNoToRage started commentating his friends with his best game-show-voice. And Gladd even duct taped his shoes to his head in some sort of bizarre, puzzle-solving ritual. It was a long six days, but one where the entire community worked together to solve something massive.

The frustration from Niobe Labs derived from a divide in the community — some players wanted their content now, they didn’t want to wait for streamers to solve a puzzle for them. But the Corridors of Time required the entire community to come together and contribute. Every player that sent in a code shaved hours of time off the project. So while content creators were the most public puzzle-solvers, every Destiny player can claim some kind of ownership over the solution. It was truly a team effort.