The best thing about Mass Effect 2’s squadmates is that everyone is someone’s favourite. You might instantly be thinking “yeah, but Jacob though,” but we actually have somebody who likes Jacob here at TheGamer.com – don’t worry, we think he’s a bit odd too. Jacob aside though, I think it’s actually Legion that gets the short straw in Mass Effect 2. Not because he isn’t likeable, but because it’s basically impossible to take him anywhere if you don’t want the rest of your crew to die.

Legion is the final squadmate you can pick up in Mass Effect 2, after finding him during the Reaper IFF mission. Unfortunately, once you do that, the game locks into a very specific pacing. Once you do the Reaper IFF, the rest of the Normandy – sans Joker – will soon be collected by the Collectors, and you’ll be in a race against time to get them back. You can do Legion’s loyalty mission, but do much else and members of the Normandy start to die. After letting you go at your own pace, blowing up abandoned prisons, pulling off heists, and playing quarian Judge Judy, you’re locked into a very specific pattern. You can still sweep up any loyalty missions not previously completed, or go and do the odd jobs you’ve dug up while probing, but doing so will result in the deaths of Dr Chakwas, Kelly Chambers, and all the other people whose names you never bothered to learn, you selfish bastard.

“You can do it but it will kill a lot of people” is not really permission though, is it? I know Mass Effect is a choice-based game, but that’s less of a choice than it is confirmation that you’ve played the game wrong. This is surprising, because there are some great moments if you do in fact play the game wrong and take Legion on a few quests it couldn’t really do in a complete run of the game that keeps everyone alive. 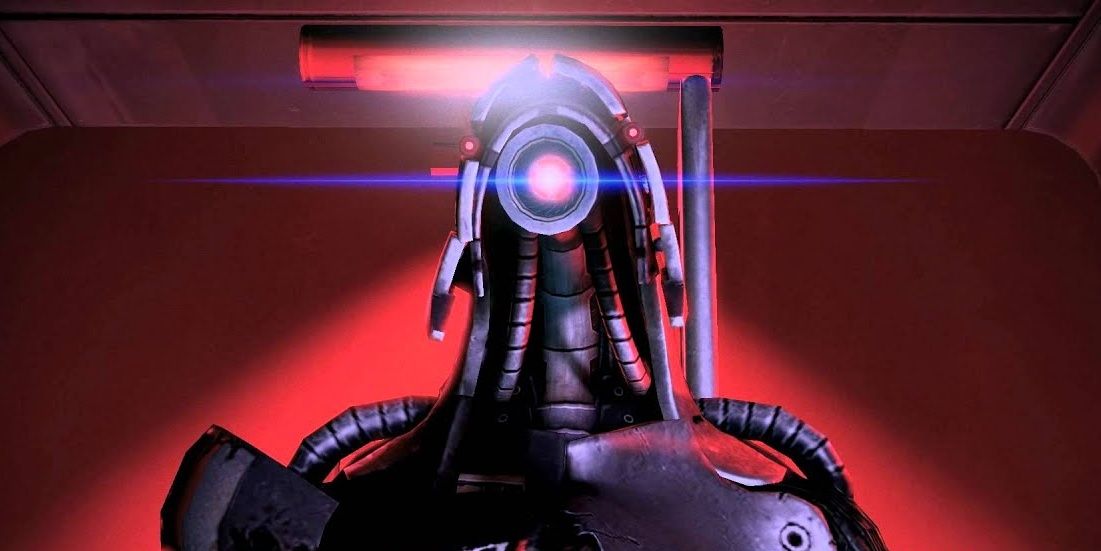 Take Tali’s loyalty mission, for example. It’s not only video game perfection, it also revolves around Tali being accused of sending active geth back to the Fleet. It turns out she sent disabled parts back, but her father had been illegally reassembling them, a treasonous act that led to his death. Most people playing the game at the ‘correct’ pace will take Thane, or Garrus, or Grunt – they’ll just pick A.N. Other and roll with it. As a result, your companion is mostly ignored on this mission, aside from the middle combat section. If you take Legion though, everything changes.

Immediately upon arrival, you’ll find yourself having to talk your way out of a shootout just for bringing Legion aboard. Following that, if you want to successfully complete the mission with the best outcome, you need to talk to the admirals – each of them has unique dialogue if Legion is there, while none will ever address any other squadmate bar Tali herself.

Technically, it is possible to do this while still keeping everyone alive – you just need to make sure this and Legion’s loyalty missions are the only things you do in between the crew being taken and the suicide mission. Considering how close Shepard is to Tali, it’s probably not great from a thematic point of view that Shepard prioritises helping out Zaeed ahead of their quarian best friend, but still – it is possible to have these scenes while still ensuring everyone remains alive.

Less possible are the scenes you get when taking Legion to the Citadel, as they only occur the first time you visit. There might be background chatter the other times, but to get the unique interactions, you have to be fresh off the ship. This means abandoning Garrus’ and Thane’s loyalty missions, as well as a handful of other quests, and avoiding speaking to the Council for the entirety of your playthrough.

This time around, it’s not really worth it. The clerk at the desk will draw some unique lines from him, and you can talk to Anderson about him – although Anderson remains on the Presidium in future visits, so you can still have the Legion dialogue later on.

Of course, if you do play the game as intended and miss out on this, everyone will be alive at the end. You can take Legion through all the DLC and have it by your side as you sweep up the minor missions post suicide mission, and it has a few lines here and there, but still. You never really get to experiment with taking it on other major missions unless you’re willing to sacrifice the crew. Taking it to Omega brings some great soundbites from it, but by that point in the game, you’re not really going back to Omega unless you’re specifically going there to see what Legion says. It’s less of a friend you slowly get to know over time and more of a toy with a pull string in the back – keep yanking it and see what it says next.

That’s a shame, particularly because Legion has so much potential – potential it would fill if not for the game’s pacing locking it out of most of the story. Legion does a brilliant job of adding depth and heart to the geth, setting up the weight of one of Mass Effect 3’s major arcs almost single handedly. Unfortunately, you’re left with a choice of getting to know it better or killing off the Normandy’s unsung heroes – even for Mass Effect, that feels like a harsh choice.