When I first heard that Square Enix was bankrolling a Deus Ex prequel, I was worried. The original is one of the best video games ever made. An immersive sim of unparalleled scale and depth. A game so richly interactive and broad in scope, over 20 years later it's still finding new ways to surprise me. How do you follow that? Worse still, original creator Ion Storm was not involved in its development in any way—nor were any of the people instrumental in making it a classic. No Warren Spector, no Harvey Smith. It was being developed by Eidos-Montréal, a then-unknown studio with no reputation and no games under its belt. I don't think I was being unreasonable in thinking it would be a disaster.

I'm glad to say I was wrong. Deus Ex: Human Revolution launched on PC, Xbox 360, and PS3 in 2011, and not only was it a worthy follow-up to the original Deus Ex, but it carved its own distinctive identity into the series too. Eidos-Montréal's vision of a dystopian near-future was wonderfully realised, painstakingly crafted, and intelligently written. Art director Jonathan Jacques-Belletête and his team created a beautiful neo-renaissance art style that infused this dark future with an ornate black-and-gold elegance. But most important of all, it was a deep systems-driven game that encouraged player creativity, with multiple ways to approach objectives. Simply, it was Deus Ex.

Eidos-Montréal nailed it. The team, led by director Jean-François Dugas, producer David Anfossi, and lead writer Mary DeMarle, took us back 25 years before the first game, to a world where the controversial concept of mechanical body modification was just beginning to emerge. They also introduced us to a new hero, Adam Jensen, a man saved from the brink of death by a suite of invasive augmentations—who, famously, never asked for them. Jensen, with his stylish black trench coat, sculpted beard, sunglasses-like optical augs, and gruff, weary voice courtesy of actor Elias Toufexis, is a more nuanced character than the original's largely emotionless JC Denton, but similar in spirit. 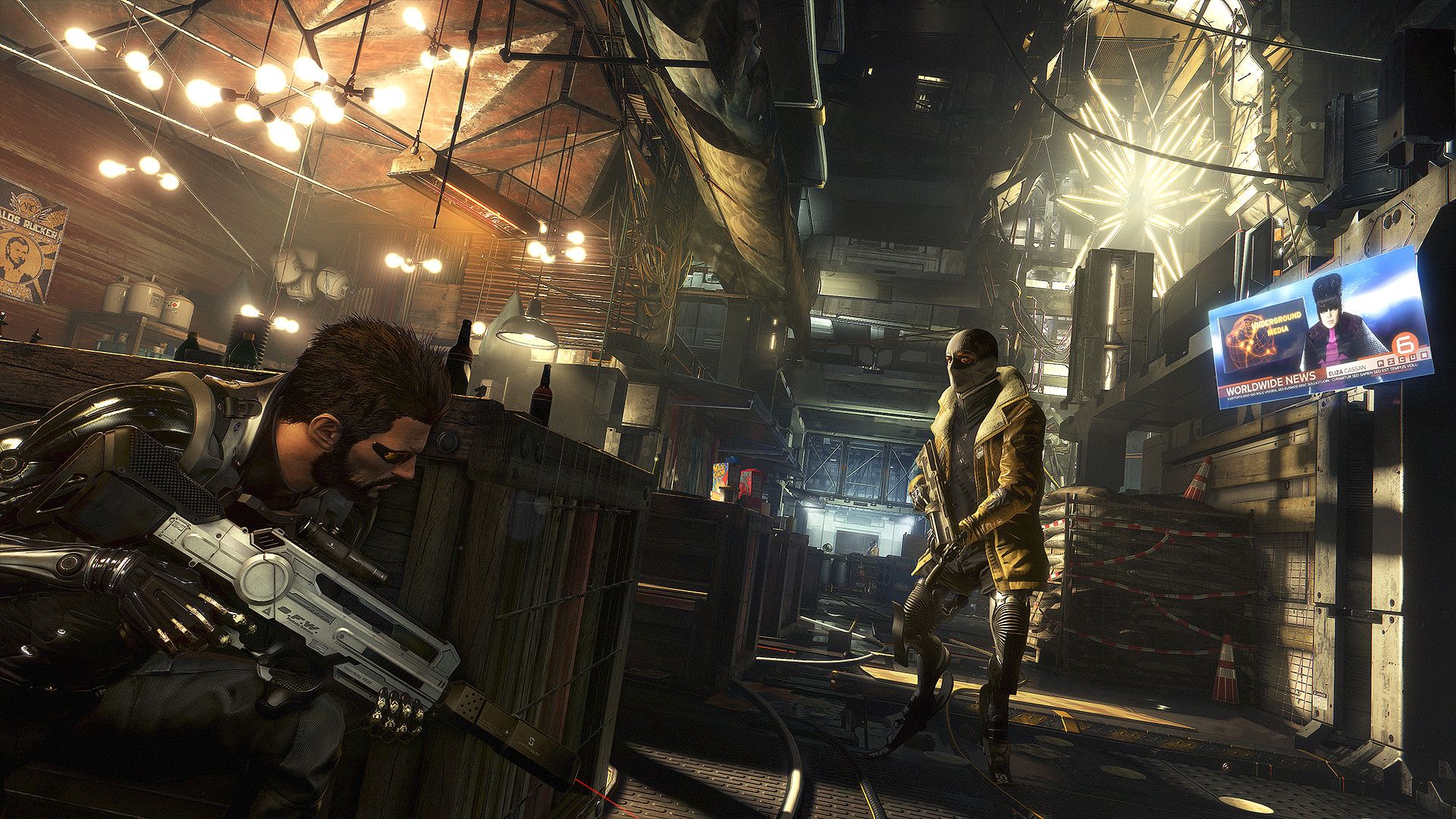 Set in Detroit and the double-stacked Chinese metropolis of Hengsha, Human Revolution is a series of atmospheric city hubs and brilliantly designed stealth sandboxes. As Jensen comes to terms with his new body, he hunts for the terrorists who attacked his place of work and left him for dead. In true Deus Ex fashion, the more he learns about the attack, the deeper the conspiracy gets. Plot elements from the original, including the presence of the sinister VersaLife corporation, begin to creep in, and Jensen finds himself at the centre of something much bigger than himself. It's one of the best modern examples of the immersive sim genre, with enough systemic depth to suit a variety of play styles.

A sequel, Mankind Divided, launched in 2016 for the PC, PS4, and Xbox One, and was even better. There was just one hub this time, the city of Prague, but it was bigger, more intricate, and more detailed than Detroit and Hengsha combined. This time Jensen was after the Illuminati, who orchestrated an event where augmented people around the world turned violent and killed tens of millions of people. Jensen also visited a dilapidated, overcrowded slum built to house augmented outcasts, which is a stunning showcase for Eidos-Montréal's environment artists. In both games, a huge amount of love and care went into creating a future that not only looked cool, but was believable too.

Human Revolution and Mankind Divided are both masterpieces of atmosphere, world-building, and visual design. From whole city blocks down to pieces of furniture and light fittings, every single object in the world feels considered, refined, and designed. There's hardly any filler at all, which is a remarkable feat. For the first game, Jacques-Belletête and his team of artists designed and built over 1400 props. The sequel probably had three times as many. The result is a world that feels cluttered and lived-in in a way very few games do, which adds to the sense that this isn't just a flimsy plywood movie set that could be knocked over at any minute by a stiff breeze, but a functioning, simulated world. 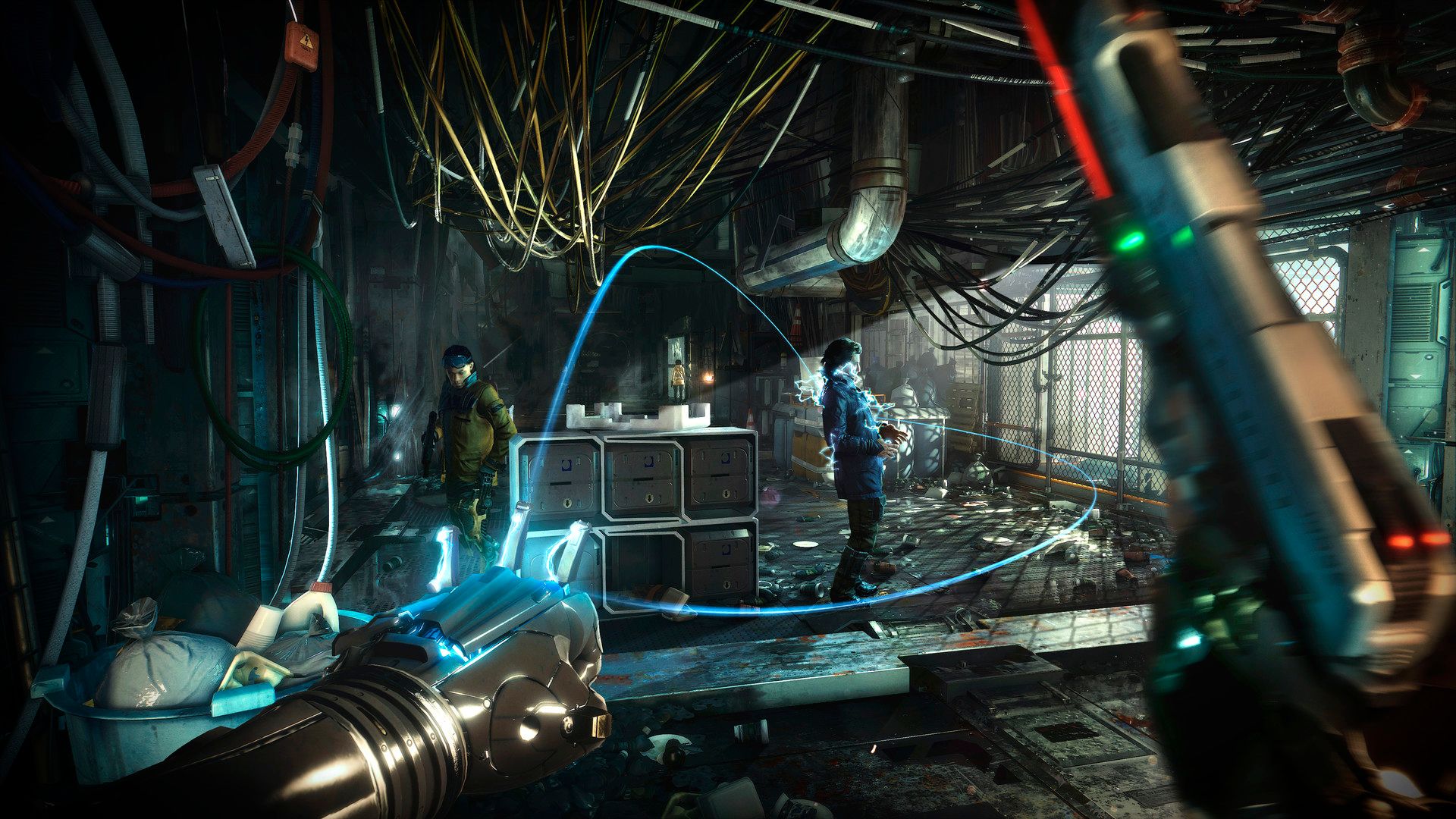 The game itself is just as rich, offering a huge range of augmentations to mix and match depending on how you choose to play the game. You can turn briefly invisible with the Glass-Shield Cloaking System, or use your Hermes Cybernetic Leg Prosthesis to leap to inaccessible areas and find alternate routes through the levels—including, yes, conveniently man-sized air vents. It wouldn't be Deus Ex without them. If you prefer a more violent approach, the Typhoon Explosive System turns you into a human frag grenade, unleashing a blast of shrapnel and shredding groups of guards and security bots to pieces. It's one of the best immersive sim toolboxes, and a joy to experiment with.

I'll stop now, but you get the idea. Eidos-Montréal made two great games, and more than lived up to the Deus Ex name. It was a mighty task, but it proved its doubters (myself included) wrong. Yet, despite Mankind Divided ending on a massive cliffhanger and Jensen's story being left unfinished, Square Enix suddenly abandoned Deus Ex. What exactly went on behind the scenes is unknown, but the popular theory is that Mankind Divided didn't sell as well as Square Enix hoped, a follow-up was cancelled, and Eidos-Montréal was reassigned to work on Marvel's Avengers and Shadow of the Tomb Raider with Crystal Dynamics. Whatever happened, Deus Ex remains on ice, and its future is frustratingly uncertain.

Eidos-Montréal is still alive and still making great games—most recently Guardians of the Galaxy, which was co-directed by Jean-François Dugas and written by Mary DeMarle. I'm delighted some of the old Deus Ex team are still out there making games at the studio, and making good ones too. But Adam Jensen deserves a proper ending to his story, and I'd love to see Eidos-Montréal return to the series that made its name. Deus Ex is one of the most respected properties in gaming, and with the success of systems-driven stealth games like Hitman, Dishonored, and Deathloop—as well as scores of people left disappointed by Cyberpunk 2077—there's never been a better time to reclaim the throne.