One of the first things I did when gaining access to the Normandy SR-2 in Mass Effect 2 was visit the original craft’s wreckage. Several voices amidst my crew had already encouraged me to visit Omega and recruit a super smart scientist, but what do they know – I’m Commander Shepard. So, after raiding a handful of planets for minerals and other resources I hop on over to a nearby system and land on a snowy, claustrophobic planet adorned with the splintered wreckage of my former home. It’s a sombre sequence of events, dog tags littering the ground acting as the only reminder of former comrades murdered by the remorseless Collectors.

As I leave my landing craft, I can’t help but stop and stare, taking in the unexpected sacrifices made by Shepard’s crew for the greater good. To me – it felt like the logical thing for my version of the galaxy’s greatest commander to do upon gaining newfound autonomy away from Cerberus. Their final moments in life, or so they thought, were spent trying to save their crew, hurling them into escape pods without a single care for their own safety. It was reflective of the sympathetic hero I’d built in the first game, a beacon of hope who wasn’t afraid to put themselves in harm’s way if it meant saving lives.

Shepard hasn’t had time to mourn, awakened from her eternal slumber and told she needs to embark on another mission, and that it is her sole duty to save humanity and put a stop to the Reaper threat. That’s all well and good, but I find the world of Mass Effect 2 infinitely more engaging when I play by my own rules, which means that personal grief has to come first before we spend the next several weeks trying to protect the galaxy from eternal annihilation. This brings me back to Normandy’s wreckage, with this entire sequence punctuated by a lack of music and a melancholic sense of place that draws you in, encouraging exploration of a broken husk that, in some ways, still feels very much alive. 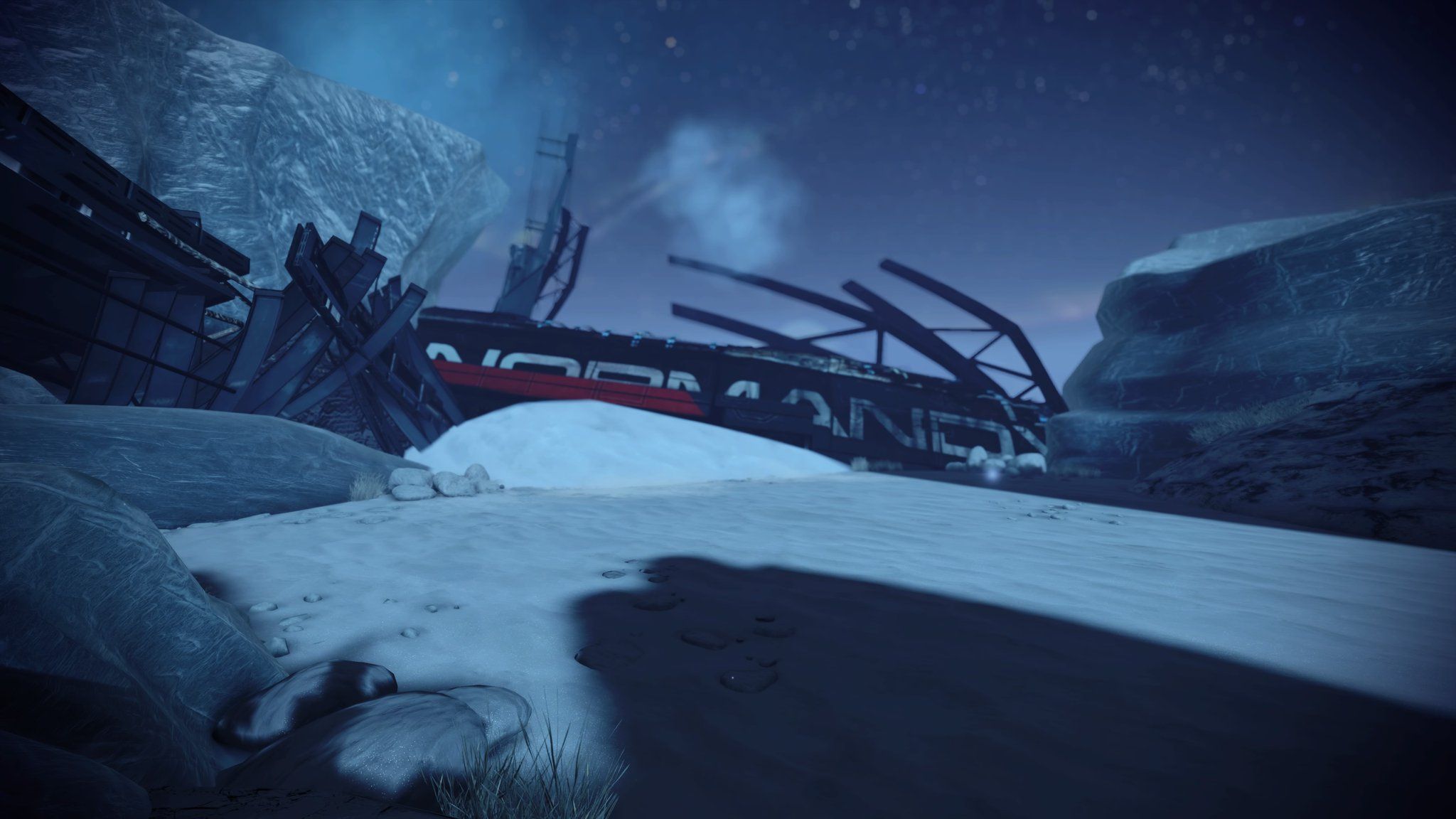 I trudge through the snow and into the cockpit, Joker’s former workstation now little more than a mess of fractured metal adorned by gorgeous flakes of extraterrestrial snow. Small flashbacks help establish the mood, reminding Shepard of the times she spent aboard this top-the-line ship before its sudden destruction. I imagine these memories and snapshots of my former virtual life would be far more impactful if I hadn’t played the first game so recently. Back in 2010, eager adventurers would have been thrown back into the past, still suffering from emotional whiplash as their legendary ship is now little more than piles of scrap for looters to pilfer through.

The opening of Mass Effect 2 is so groundbreaking because it takes away everything you’ve grown comfortable with. Your crew is torn asunder, your ship is gone, and you’re forced to work alongside an organisation that goes against many of the ideals you believe in. Shepard never really has time to find her footing, or to grow accustomed to a universe that has changed dramatically during her long absence. BioWare expects you to run forward and never look back, but the reality would and should be far more complicated. Despite the trauma attached to it, the Normandy wreckage is a reminder of what used to be, a comforting symbol of success that was ripped out from under us.

I’m tasked with collecting a total of 20 dog tags located across the planet, which is a rather small arena punctuated by different piles of debris. The Mako acts as a central point, jutting out from the ice as a reminder of the planetary exploration this game leaves behind in favour of more focused, curated storytelling. Flashbacks continue surfacing as I explore, reminding me of the mess hall, medical bay, and deceased space racist Ashley Williams. To be honest her cropping up ruined the mood, but I ignored her and kept on moving. Things reach a crescendo as I approach the galaxy map and find a datapad belonging to Navigator Pressly. 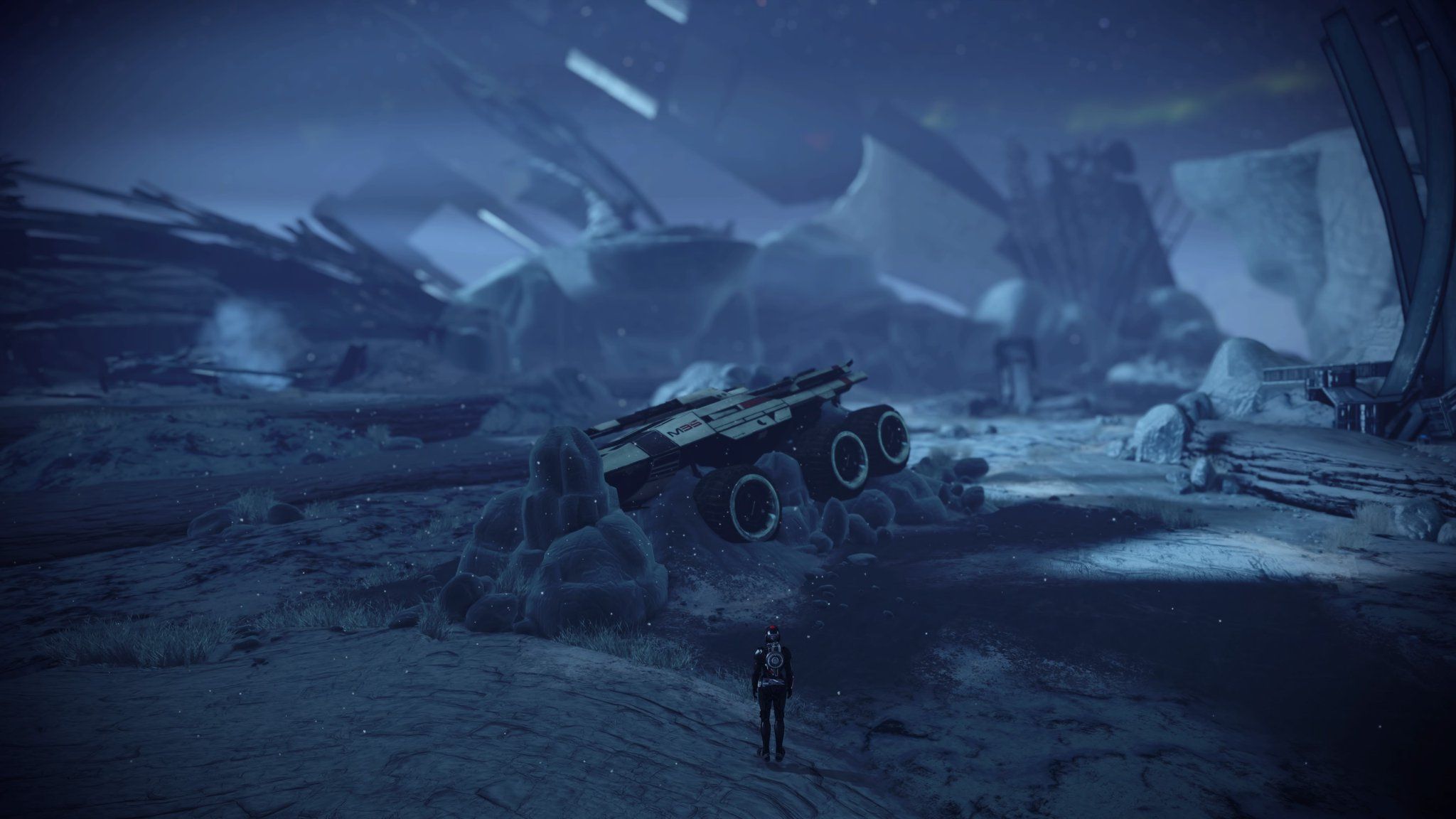 Having perished alongside the Normandy, Pressly was a man who often had doubts about Shepard working with aliens, believing that humanity should work for itself and nothing else. This attitude is unfortunately rather common in Mass Effect, a reflection of our species’ infancy on the galactic stage and occasional unwillingness to work with others. However, the datapad shines a new light on things. It has three entries, telling a brief narrative of Pressly’s growth from a grumpy ol’ space boomer into a more accepting individual. It’s heartfelt, but his death means that such progression has stalled, and all Shepard can do is mourn and remember that her actions had a huge influence on people, even if they died under her command.

The outcome of this section could change depending on if you’re Paragon or Renegade, I’m not entirely sure, but it’s a powerful moment of unexpected storytelling that the franchise often lacks. It doesn’t conclude with a bombastic action sequence or narrative revelation. Instead, I’m met with nothing but silence. This iteration of the Normandy is lost forever, as is much of its crew, so all I can do is take this tangled mess of dog tags with me and offer grieving families some form of closure. Commander Shepard is accustomed to saving the world and being hailed as a hero, but it’s important we don’t forget the harder moments of such an identity, and how they are often the ones that stick with you the longest.