John Wick Hex: The action ‘film’ that plays like a board game

I don’t play as John Wick. Instead, I play as John Wick’s brain, and make those split-second decisions that allow him to seem so unstoppable. I’m not given more resources than the common person to make those calls. I’m merely given much more time to figure out the best way to destroy everyone who may wish me harm, in every situation I may find myself in. 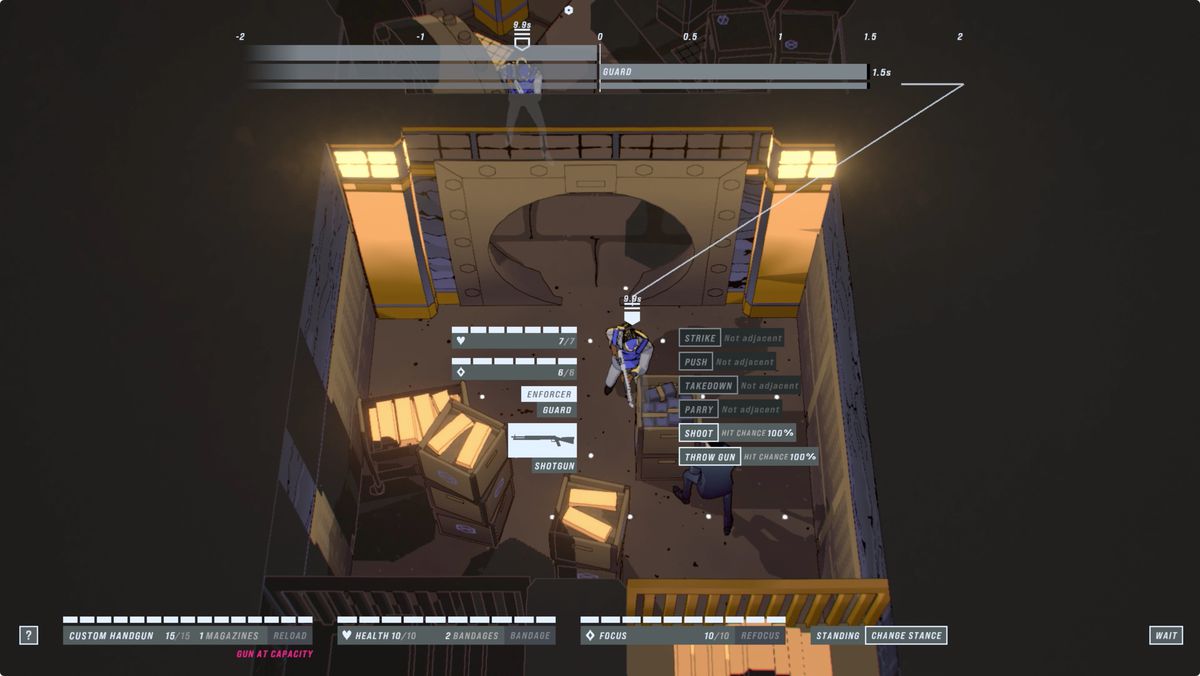 Clicking on an enemy brings up a list of actions to choose from.
Bithell Games/Good Shepherd Entertainment

The controls are simple: I click a destination to move, choose a target, and then choose an action from a list of options. The only other controls I have are for the camera, so I can pan, tilt, and zoom to see the level and plan John’s next move. I don’t pull the trigger. I pull the strings. I tell John what to do, it’s up to his muscle memory to execute my commands perfectly.

John Wick Hex plays like a board game (or, more accurately, a tabletop wargame). My goal is to rescue a pair of John’s allies from a disgruntled crime boss. These allies are Winston, the owner of the movies’ Continental Hotel, and Charon, the hotel manager — Ian McShane and Lance Reddick portray the characters on film and voice their characters in the game.

To get to them, I have to lead John through a couple dozen levels full of bad guys who all need to be taken out to keep his forward momentum. And to do that, I have to manage my time and ammunition, check sight lines, and weigh the odds of success for each move I make. My ammo and health carry over for several levels at a time, so every decision — every bullet fired and every mistake made — feels that much heavier. A clean run sets me up well for the next gunfight, while a series of mistakes might make the next area nearly impossible for me to overcome. 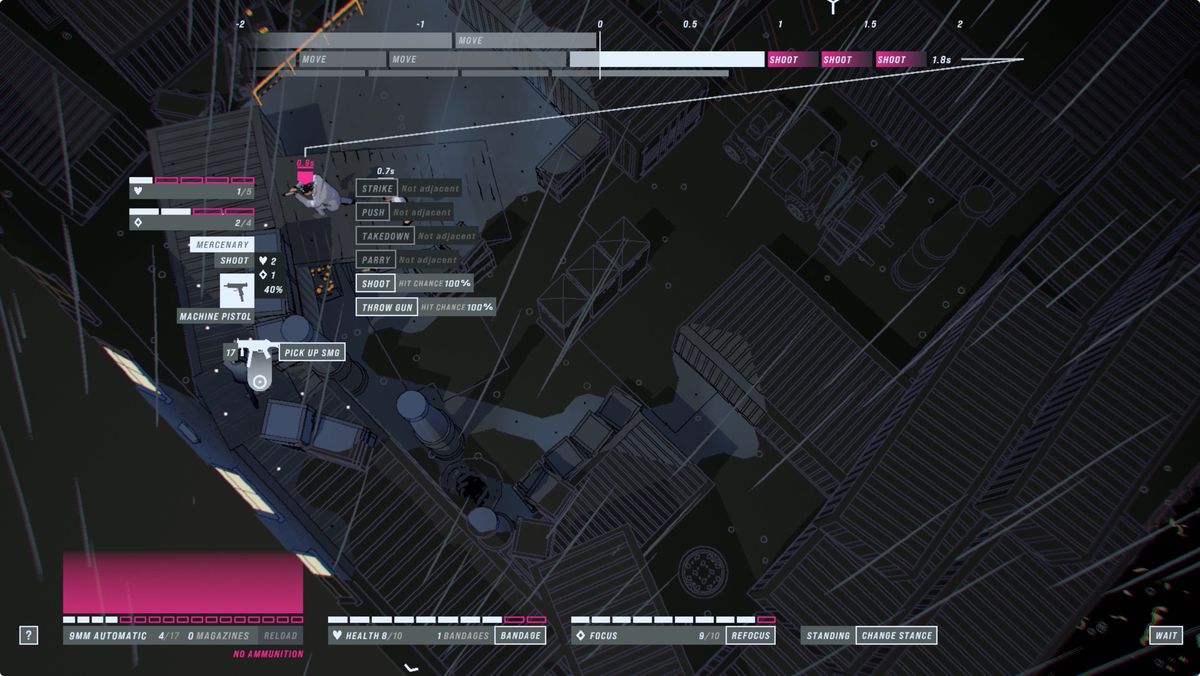 The timeline at the top shows me that this enemy is planning on shooting me. Three times.
Bithell Games/Good Shepherd Entertainment

Time is represented by timelines at the top of my screen with each action — both mine and my opponents’ — as discrete chunks along a possible future. Everything is technically happening at once, but the action is broken up into moments that can interrupt the actions of your opponent, or your own attacks.

And I can see what my enemies are going to do in their own timeline, which informs my decisions. When an enemy is aiming at me and ready to fire, it appears in the timeline as a pink block — the stylized color of blood in John Wick Hex — and I choose how to react. I can break the sight line or duck behind cover so that John doesn’t get shot at all. I can strike first with my fists or my gun and interrupt them. Or I can play the odds, knowing that John is hard to hit when he’s moving, and roll out of the way.

I don’t worry about the note on the timeline about the enemy firing unless I can see that it’s going to happen before I’m able to fire a round off myself or disarm that enemy. A shot with a 40% chance of landing feels like a huge risk if missing means that everyone else gets to attack before I’m able to move myself away from the brawl. It’s a battle of wits, and it all comes down to who gets to a firing solution first, or who can throw the first punch.

The game gives me plenty of time to make my decisions. It pauses indefinitely whenever John completes the action I choose or he spots a new enemy. I get to weigh each option and choose John’s next action as carefully (or carelessly) as I want.

Even with all the time in the world, I still get outmaneuvered and surprised by enemies when I make a bad choice, gamble on a risky shot, or focus on one enemy instead of the entire battlefield. And that creates tension without creating stress. John Wick Hex does have an “Expedited” mode where I only have five seconds to make every decision, but just the thought of that makes my palms sweat and I refuse to try it. You might have steadier nerves than I do, or be less prone to decision-based panic, of course.

Generally, the gameplay works beautifully. The fog of war makes the battlefield and cover clear and easy to spot, while obscuring enemies that aren’t in my line of sight. I get information about enemies and their weapons (or lack thereof) by clicking on them. I see how much ammo every dropped weapon has left. John Wick himself may have to keep everything in his head from moment to moment, but the game does much of that work for me, thankfully. 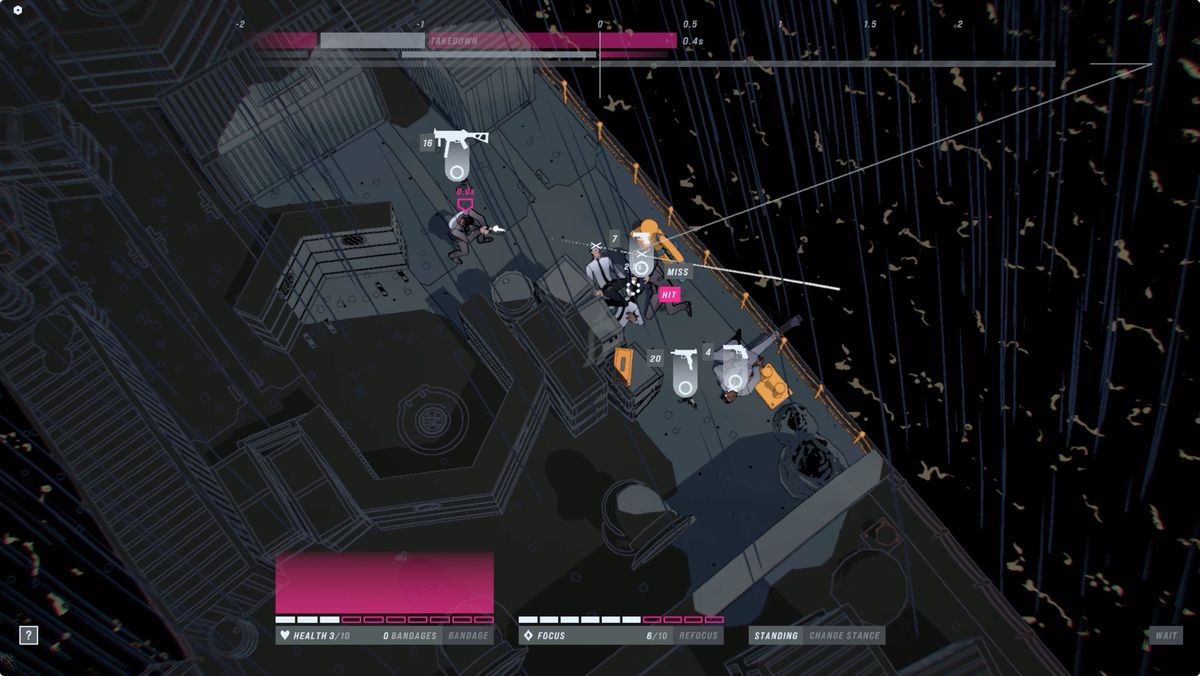 John’s in there somewhere. I think.
Bithell Games/Good Shepherd Entertainment

But all of that information can also lead to a very muddled screen. More than a few times, I got killed by an enemy because I couldn’t pick them out behind the piles of dead bodies, dropped weapons and their overlays, and my own actions menu. Sometimes, I couldn’t even pick out John in the clutter, and that lead to mistakes.

Those mistakes were made all the more frustrating because making the right choices feels so good. When I knock down an enemy, shoot his backup while he’s stunned, finish him off with my fists, and then toss my now-empty gun across the room at a new enemy, I’m choreographing my own little action sequence. This is how you recreate the action scenes from the movies through games: by giving the player the freedom and tools necessary to feel as powerful as the character.

And those action scenes I’m creating in every round deliver quite the payoff. When I successfully complete an area, I have the option to watch a replay of the area as a cutscene.

It’s a great idea on paper. Getting to watch that scene that I choreographed is the logical reward, but the execution is lacking. The cutscene plays out on the same hex-grid that gameplay does, so John’s movement is clunky instead of fluid. He ricochets down a hallway instead of walking in a straight line. His moveset is limited, so an extended fistfight is just John delivering the same punch over and over.

And the cutscene’s camera is just … bad. The same set dressing that makes the fights so interesting from above — providing cover and limiting sight lines — means half of the action is in shadow, hidden behind an obstacle or wall.

There’s a reason the movies themselves are shot with physical stunts as much possible, and why the camera is so active. It’s controlled by human minds, who plan each scene out moment by moment and put the camera in the best place to capture each beat. Delivering something half as competent, that’s automated based on the actions of the player, may not be possible without a much larger budget, if at all.

While those cutscenes would’ve been nice to have, they’re not what makes the game shine. John Wick Hex delivers a strategy game that explains how characters in action movies “work,” and it does that brilliantly.

I still get to punch, shoot, dodge, and throw guns at bad guys, but I’m one step removed from the action, directing my own movie. I doubt I would be very good at it in real life, but this is John Wick we’re talking about here. Being the boogeyman certainly helps.