Madden NFL 20 begins with the 2019 Pro Bowl game, and it’s an appropriate showcase for what’s changed this year. I took control of Ezekiel Elliott on a toss play, and he dusted the linebacker with a juke move so supple, I blurted out like I was livestreaming the game: “Goddamn! That worked like hell!” Finally, I thought, Madden was putting some forgiveness in the timing of its stick moves, which lesser users like me always seem to key in too late.

Playing later, in the Ultimate Team mode divorced from the NFL’s present day, I found out why. In the main game, Elliott has the First One Free superstar trait, which means that his first juke move on the right stick is a lot better at faking out a free defender. Other runners don’t get this benefit. In Ultimate Team, the fantasy-sports/card-collection game that drives so much of Madden’s revenue, the 72-rated Todd Gurley that everyone gets at the beginning didn’t have it. He did the ineffective, quick-flick, standstill shimmy I’d come to know and hate over more than a decade of playing and reviewing Madden.

But in the bigger picture, at least this made sense. Some guys do have better moves, and they’re more effective. And I’m no longer running players against their type, expecting a between-the-tackles runner like Gurley to be as lithe as Elliott. The result is a more realistic Madden. 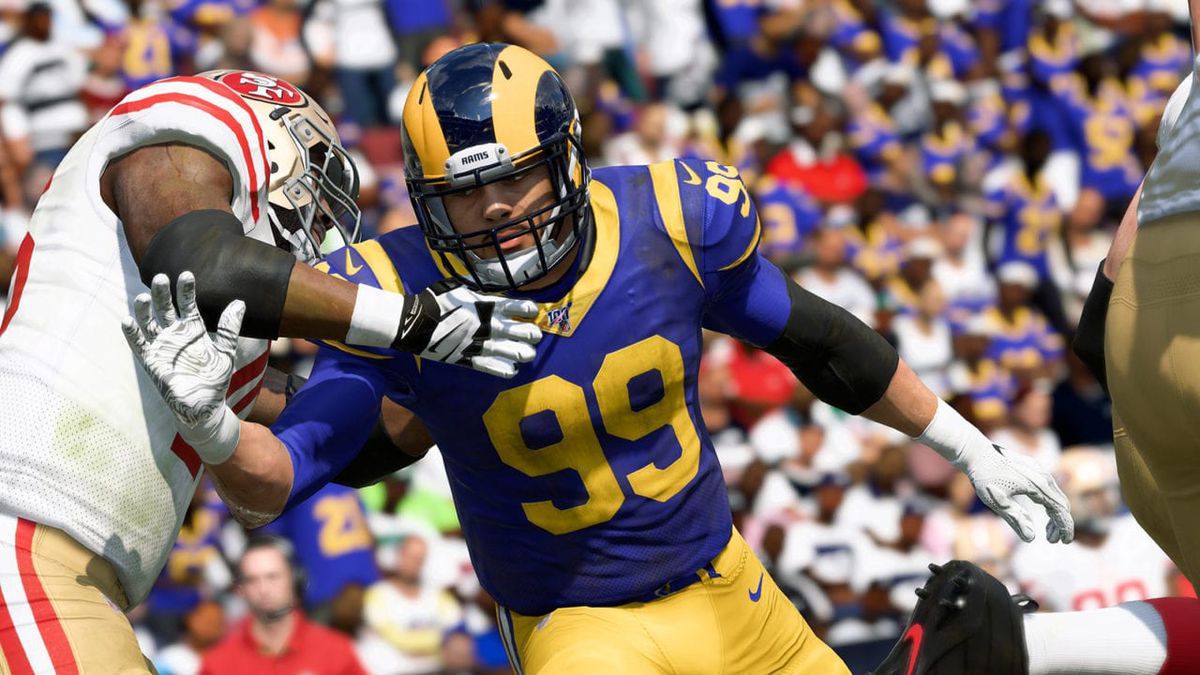 Aaron Donald is even deadlier in Madden NFL 20, as faster players are able to gain greater separation to disrupt plays, or make them.
EA Tiburon/Electronic Arts

This is always the goal of a sports video game, for both developer and player: to perpetrate something that passes for the sport as broadcast on a weekend. The closer that sport’s relationship to television — and American football is almost a made-for-TV sport — the harder that job is. Madden NFL 20 succeeds in that pursuit, in the way it subtly differentiates star players from game to game. When I’m looking over the postgame stats, there always seems to be a story ready to explain it. Well, the running game really was not working against Minnesota’s front four. So I had to try something else, and that didn’t work either. But it’s understandable, and therefore acceptable, in a 16-game virtual season where, for years, I judged Madden against my ability to kick its ass every week.

The gameplay triggers that old frat-boy id telling me I want to play Madden. There’s always some relearning of the sport after six months not engaging with it seriously, and for a video game, you have to adapt along with its makers to the prevalence of tactics like run-pass options. But Madden NFL 20 makes that tryout process enjoyable, even if I go back to more conventional methods later and for the long term. There’s a run-pass option sweep whose surprising effectiveness reminds me of the flanker streak option in College Football USA on the Sega Genesis. The difference, 25 years later, is that the game has been giving out a hat count (of opposing defenders on the line) before the play to help you decide which choice is better.

All of this makes my created quarterback look smarter than his puppeteer (me) really is. Madden NFL 20’s showpiece mode is a career/story hybrid called Face of the Franchise: QB1, notable for the return of NCAA teams to video gaming in its two-game preamble. In this story, the user is told that the coach wants to work with a simplified playbook. Whatever the player’s answer, you still get the full binder of plays. But the expectation in that plot device caused me, at least, to look for plays that had the highest probability of moving the ball, rather than showcasing my assumed superhero talent. This is important because the player has no control over where they are drafted in Face of the Franchise, and so they will have to be adaptable to the priorities of the Miami Dolphins or the Denver Broncos, where I ended up.

Face of the Franchise will be most fun for people who are fans of football in general, rather than a particular team. It is surprisingly hilarious in its portrayal of the NFL draft cattle call and the player character fielding ridiculous yes-or-no questions from front office functionaries for the league’s most desperate clubs. Overall, it’s a more intentional onboarding to Madden’s career mode than its predecessors, 2017’s Longshot and and 2018’s Longshot: Homecoming. The story, such that one exists, doesn’t reach far beyond typical sports-page tropes or emotional conflict, but after two years of Longshot it’s clear to me that such things really don’t matter to most of Madden’s players. The narrative is more supported by the procedurally generated (at least, it seemed that way to me) interactions in the player’s rookie NFL season. These come through mainly in a text-based dialogue, though it can be expansive enough to let players beef with rivals. In all, I felt like I created a player who wasn’t simply my avatar, for a change, but I was still given plenty of reasons to be interested in him.

That’s good, because if you’re playing Madden NFL 20 at any kind of a challenging setting, the speed of opposing elite players can be discouraging. Pass rushers like Cameron Heyward for Pittsburgh get on you in a hurry and even disrupt running plays in the backfield, making play-calling and then audibling out of a bad look more important. It works both ways, though. Usually, I control a defensive lineman because his job never changes and I’m less likely to overrun a play. But the separation that players with meaningful speed can achieve in Madden NFL 20 made me switch over to linebackers, because a guy like Ryan Kerrigan or Von Miller is more capable of the behind-the-line-of-scrimmage disruption that any defensive coach wants from every play.

Where Madden falls short of its promises to me, this year, is in the “X-Factor Superstar” athletes. These are All-Pros who are so special they get a distinct gameplay advantage, or should, and Madden NFL 20 really wants you to know about them, making the list of these players and their secret weapons a front-page option in the user menu. Perusing it, I found that taking command of a dropback statue like Ben Roethlisberger, the player will have the first open receiver highlighted when he’s in the pocket. This immediately appealed to me, because I make terrible reads as a video game quarterback (and it’s why I prefer to play a running back in the career modes). But I rarely saw this callout with Roethlisberger or Tom Brady, another quarterback who has the trait. Usually a receiver got open before the pocket was set up, mooting that advantage. I also tend to set up my drives with passing plays where there’s only one option, like screens and drags, which makes this ability irrelevant.

Every team has at least two players who get some thumb on the scale, but it’s in highly specific situations. Cover star Patrick Mahomes, the ascendant Kansas City quarterback, is great at throwing on the run, of course, just like in real life. But a close read reveals that he gets no edge if he’s throwing (a) high, (b) low, (c) under pressure, or (d) across his body. I suppose these qualifications are necessary because a player with carte-blanche accuracy could destroy the balance of online multiplayer, ranked or otherwise. As such, Mahomes’ talent is something that rescues the occasional broken play — because he does have perfect accuracy on cross-body throws when he’s not running or under pressure — rather than establishing a perfectly planned one. Kansas City’s Patrick Mahomes is this year’s cover boy, and Madden NFL 20 does its best to highlight his freelancing, razzle-dazzle style of play
EA Tiburon/Electronic Arts

I suppose that’s how it should be, though. I doubt Andy Reid’s game plan for the Chiefs is to send all the receivers on a go pattern and have Mahomes fuck around for a little bit before winging it to one of them. But the sizzle of these X-Factor Superstar traits doesn’t have much steak in the long term. Games are determined more, as they usually are, by play selection and then the speed with which the user or the CPU applies that pattern. Madden’s longest and most unfulfilled aspiration is giving individuality to players that are covered in armor, performing minute tasks directed by a headset. The Superstar X-Factor doesn’t get any closer to that than the “Weapons” of Madden NFL 06, or the fighting-game button combos that Madden NFL 25 put into the running game.

By all of this, I still mean to say it’s American football, which is by nature a TV spectacle and loads of fun. Madden’s genius isn’t really in representing the latest antics, like Odell Beckham’s one-handed grab (previous cover star!) or Mahomes’ back-foot improvisations. It’s in the lure it sets, where you think you may have discovered something that the game’s latest wizard, like L.A.’s Sean McVay, missed and then trying it and realizing, shit, I really am not that smart. A football game is decided by the raw application of a singular physical trait; most of the time it’s speed, other days it’s mass. Electronic Arts’ impossible assignment is to make that basic, eons-old truth seem interesting and different year to year. Madden NFL 20 still succeeds at it.