If there was one word I could use to describe Maquette it would be “twee.” This game is twee as hell. It is saccharine, it is overly sentimental, it is the game equivalent of a mawkish independent movie about romance. It might as well have been called 500 Days Of Summer: The Video Game. Only instead of amusing musical numbers, Maquette tells its story using puzzles that play with perspective.

I thought I could be in for a treat seeing as how this game comes from indie powerhouse publisher Annapurna Interactive. They’re well known for producing enchanting games that center around similar subject matter. Unfortunately, due to some broken puzzles and a romance that’s not all that interesting, Maquette ends up feeling like a sugar rush that’s more likely to hurt your head than your heart. 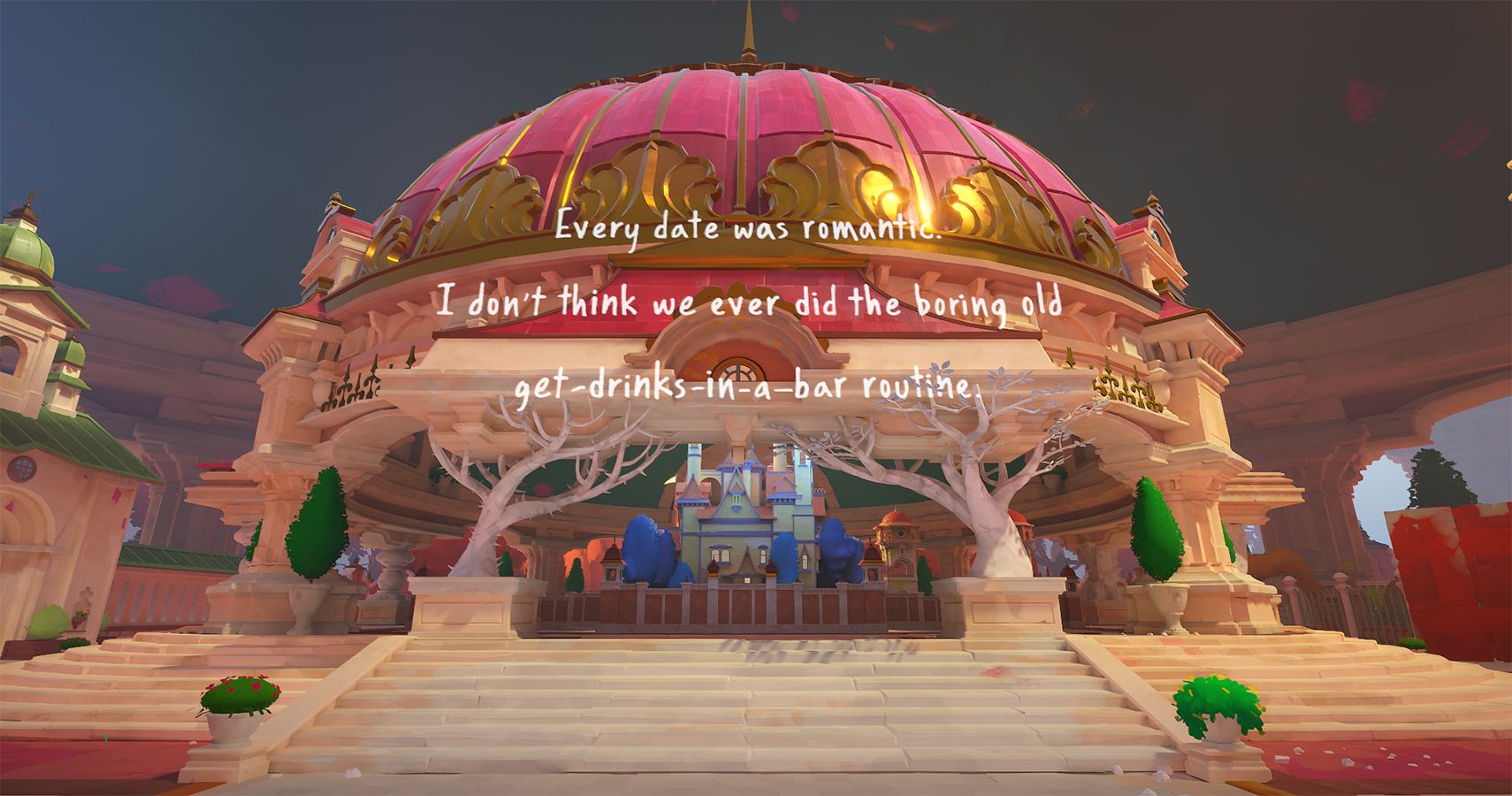 The story revolves around Michael and Kenzie, a couple who meet in a coffee shop, gush about their interests in art, and instantly hit it off. We follow them throughout their time together and see the highs and lows of their relationship. And… that’s pretty much it.

It’s a basic romantic tale, and that would be fine if the narrative itself had some engaging moments between the two. But it never really feels like a story that’s worth telling. It’s just two people who fall for one another and then have to deal with their relationship not becoming some epic tale of everlasting love. They meet, they spend every moment together, they draw in a sketchbook, they get a house, then they get sick of each other, and it goes from there. Meanwhile, little bits of writing appear on the walls of the game’s world that try to make this story seem grander than it is. Yet, I never really cared all that much. Their initial interactions are way too lovey-dovey and full of dialogue that could have been ripped out of a young adult novel. Maybe I’m too cynical, but it made me downright hate these two for most of the game.

The story also has some pacing problems as it moves so quickly. I couldn’t believe how fast the cracks started to form between this couple. It’s kind of hard to become invested in the lives of these people when they go from madly in love to indifferent towards each other over the course of a chapter.

However, while the dialogue could be too precious, the voice-acting was well done. Seth Gabel and Bryce Dallas Howard – who are married in real life, which is a factoid you’ll probably read in every review of this game – voice these characters and do a good job when things start to go sour. Although the cutesy beginning of their relationship is so sugary-sweet that it could give you diabetes, I blame that more on the dialogue than their performances. They managed to wring some actual emotion out of their lines and that was enough to almost get me engaged in this story. Almost. 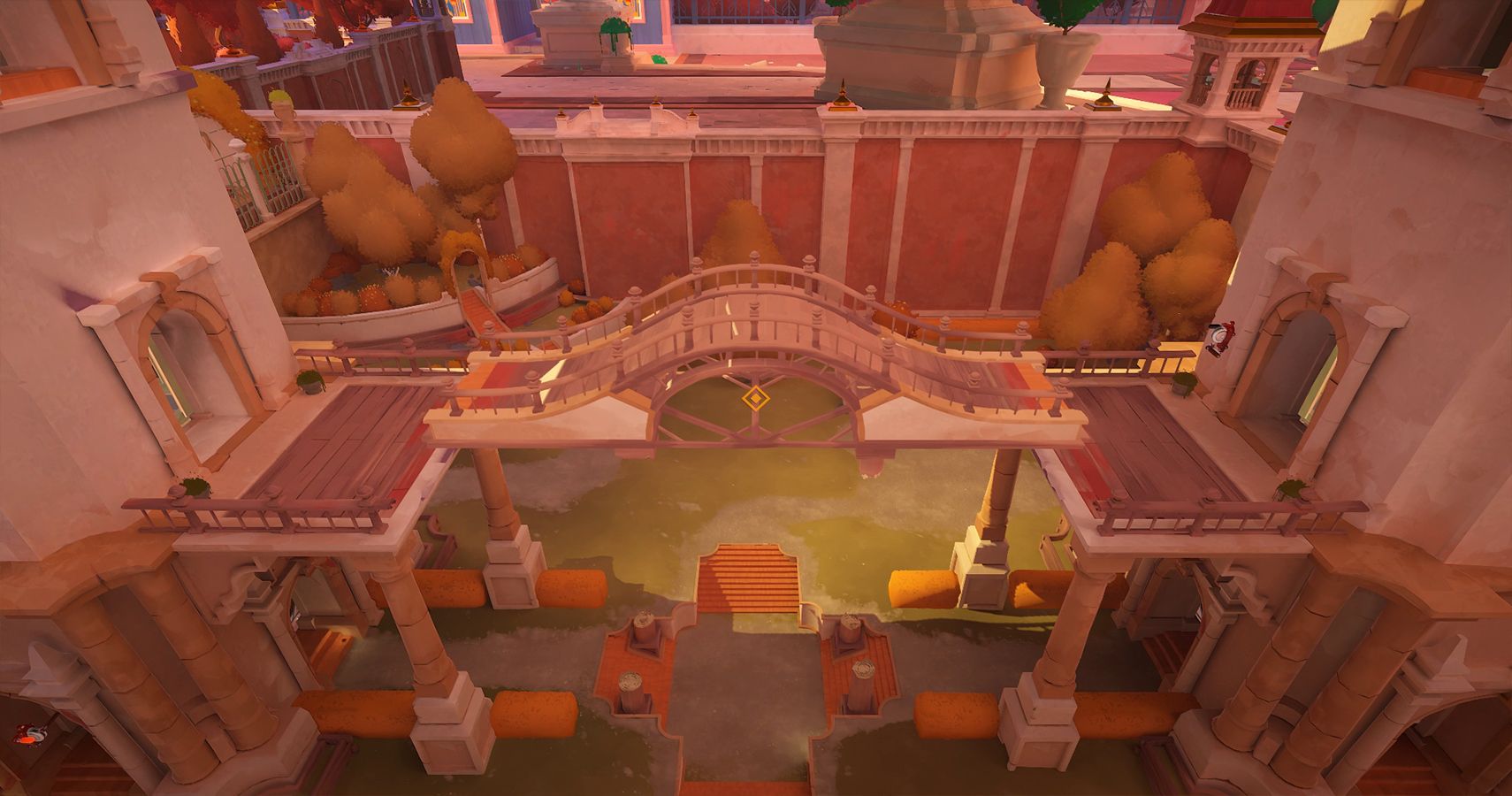 Maquette tells its love story through the use of puzzles that manipulate the size and shape of objects to traverse the environment. If that sounds familiar, that’s because it’s very reminiscent of what Superliminal does with its own gameplay. You have a little diorama that acts as a miniature version of the overall world. When you place a small item in the diorama, a normal-sized copy of that item will appear on the level. Then if you took that normal-sized item and place it in the diorama, a super-sized item will show up.  This means you can place objects to form bridges or platforms, move items from one place to another, etc.

The puzzles also tie into the story by having the environment change depending on how things are going. When things are going great between the two the world will be full of sunshine and happy music. When they fight, the world becomes dark and windy, and the buildings become broken and run-down.

The game finds some creative ways to play with perspective along with other puzzles that incorporate elements from the story. I just wish that some of the puzzles themselves were as creative. Simply put, some of them are nonsensical or even straight-up bad. There was a book I needed to get that was at the top of a staircase. I tried to climb those stairs only to be stopped by some invisible wall. Despite looking perfectly fine, these stairs were apparently too steep for my idiot character to climb. Thus, the puzzle became, “how do I get my dumb ass up some stairs?” Not exactly an enthralling conundrum. 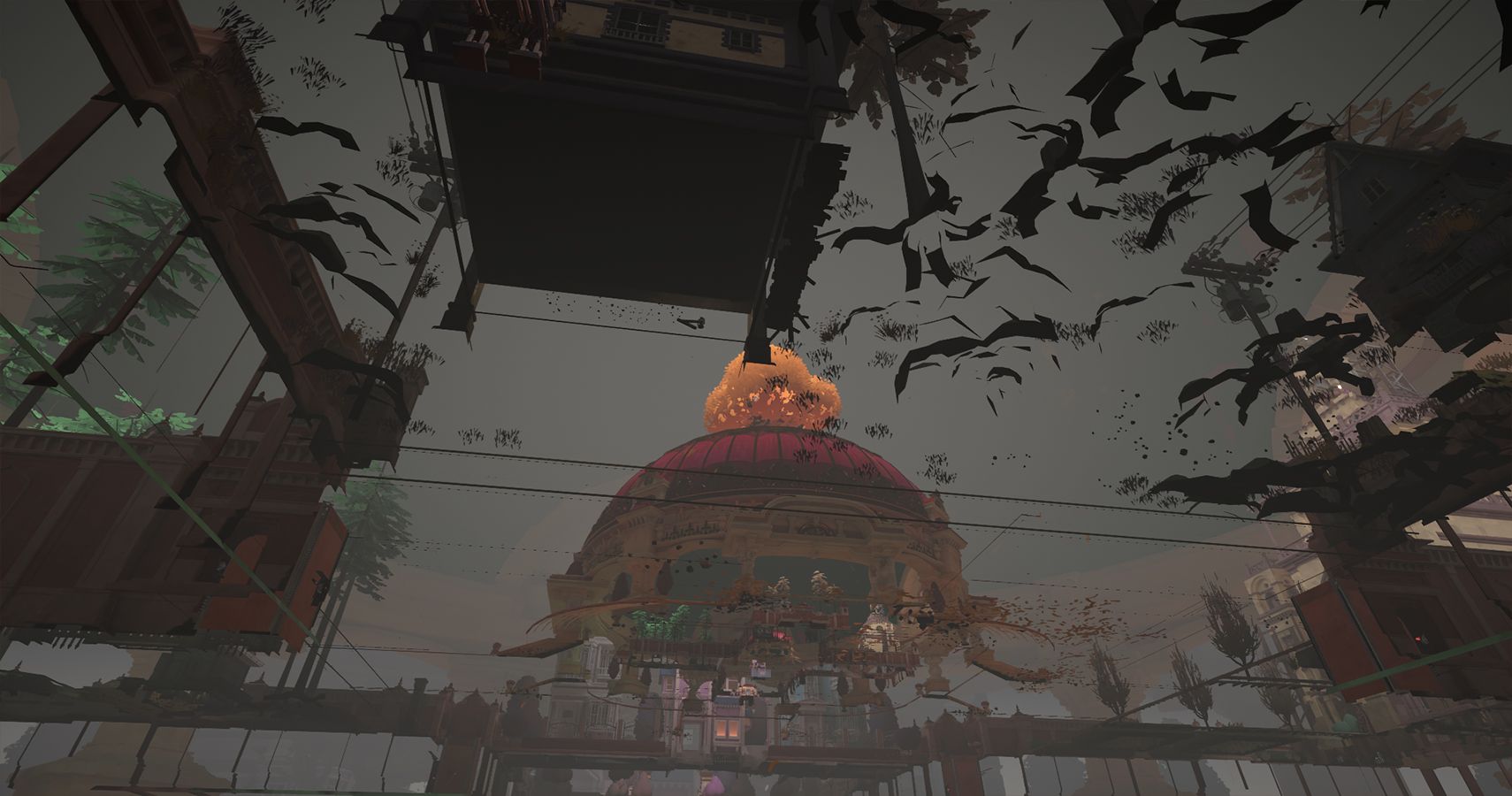 It doesn’t help that Maquette can be way, way too glitchy. It’s common to pass through a wall you weren’t supposed to, fall through the floor, have items disappear or get stuck in places, etc. Some items would also act incredibly glitchy when they were resized to be bigger and smaller. This bugginess had a negative effect on my puzzle-solving skills as instead of finding clever solutions, I often felt like I was breaking the game. I solved some puzzles by just fooling around with objects and randomly finding a way forward. One puzzle involved getting a jewel to the other side of a wall. I couldn’t figure out the answer for the life of me and I started to ram the jewel into the wall out of frustration. Somehow, that triggered the animation for solving the puzzle. I don’t think that was supposed to happen, but if it was, it did not look good.

Speaking of breaking the game, it is very possible to completely ruin your own progress. There was one time I tossed an item over a wall thinking that could help with a puzzle. It didn’t, and even worse, there wasn’t a way to retrieve that item. Naturally, I thought, “well, I goofed up, time to restart from the last checkpoint.” Except there was no option for that. I don’t even think there are checkpoints at all. All I could do was restart from the last auto-save, which didn’t help me as it put me back in the same spot where I had broken the game.

So I clicked on the restart option on the pause screen and that brought me back to the very beginning of the chapter. I had to completely play the entire chapter all over again because I had messed things up. And sure, that time it was my own fault, but then there were times when I got stuck in an elevator or had fallen through the world. So even when it was the game itself that had broke I still had to replay the whole chapter from scratch. Needless to say, I was not happy with Maquette for that. 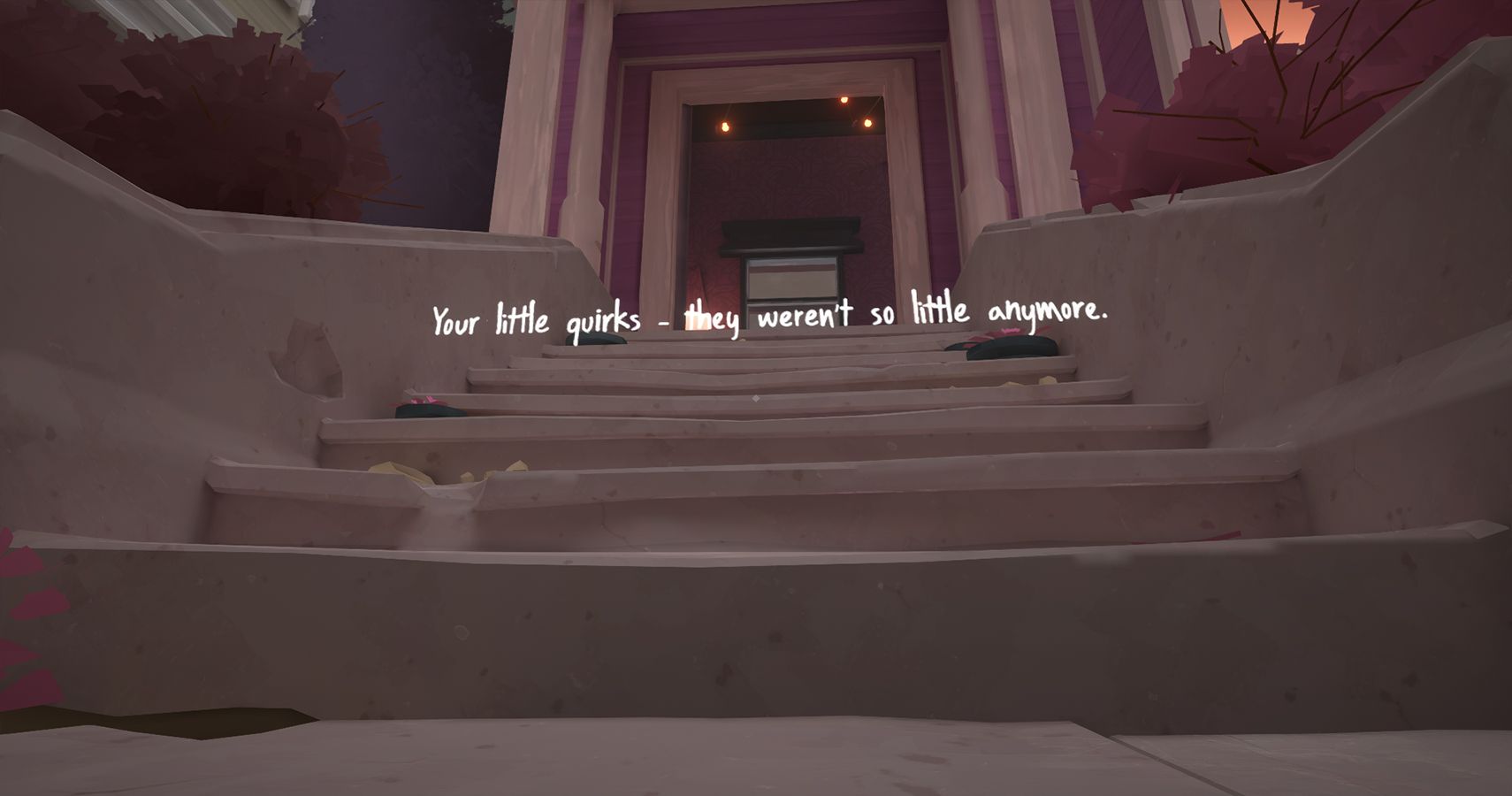 I was really hoping to be wowed by Maquette, but my time spent with it was not the magical, romantic experience I was hoping for. The bugs, overall wonkiness, and lame puzzle design annoyed me to no end. Especially when it would punish me by making me start a chapter over because it had broken itself. As a result, my already low tolerance of the love story between Michael and Kenzie grew to the point where I couldn’t stand the couple. I would actively cheer when things went wrong because I didn’t like them. The game seemingly wants you to feel like their relationship is one for the ages, but it just felt like a couple who had issues after the honeymoon period was over. It’s a tale as old as time, but not one worth basing a game on.

This month Maquette will be given away for free to anyone who subscribes to Playstation Plus. That’s a very good thing, as free is the only price I’d be willing to pay for this.

A PC copy of Maquette was provided to TheGamer for this review. Maquette is available on PC, PS4, and PS5. 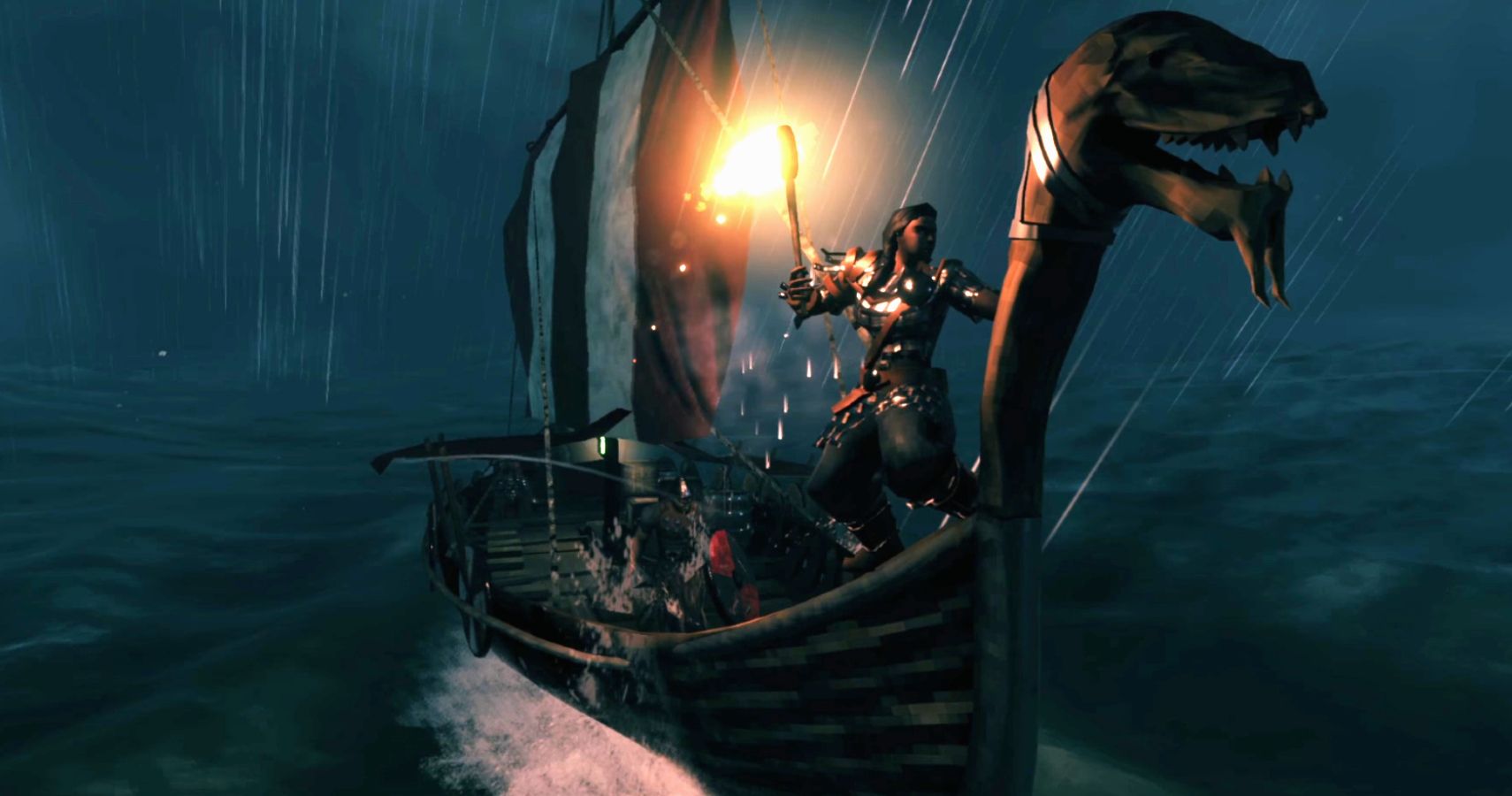