Pitching, Putters, Wedge, Lob, Duff… Golf, to me, could be an entirely alien language. I don’t know what a Birdie is – only Birdo – and the only time I’ve ever heard the words “Double Bogey” in person, I was prompted to wipe my nose. I’m not sporty and I don’t get golf, but somehow Mario acts as a universal translator. Give me a copy of a baseball game and it could be tennis for all I know. Give me a copy of a Mario sports game and watch me turn into the John Madden of whichever sport it is. With that in mind, I want you to know that I’m a Mario Golf expert, and this game is excellent.

Mario Golf: Super Rush is the first console Mario Golf game since the GameCube, meaning we’ve had nearly 18 years of no new Mario Golf game we can easily play with a room full of friends – the 3DS entry certainly isn’t being included here, as getting enough consoles and copies of it does not qualify as easy to play. Mario sports games are defined by the fact that they’re a little wacky, but always ideal for multiplayer gaming. And that’s true here. Mostly.

If you want to play traditional golf with up to four friends, either online or in the same room, then Mario Golf: Super Rush is ideal – the hushed silence that fills the room whenever someone takes a shot is soon replaced by jeers and laughter almost every time. It’s like real golf, only if every spectator really wanted you to fail. When all of your friends are playing and laughing, Mario Golf: Super Rush is at its best, but it’s not just traditional golf you can play here. 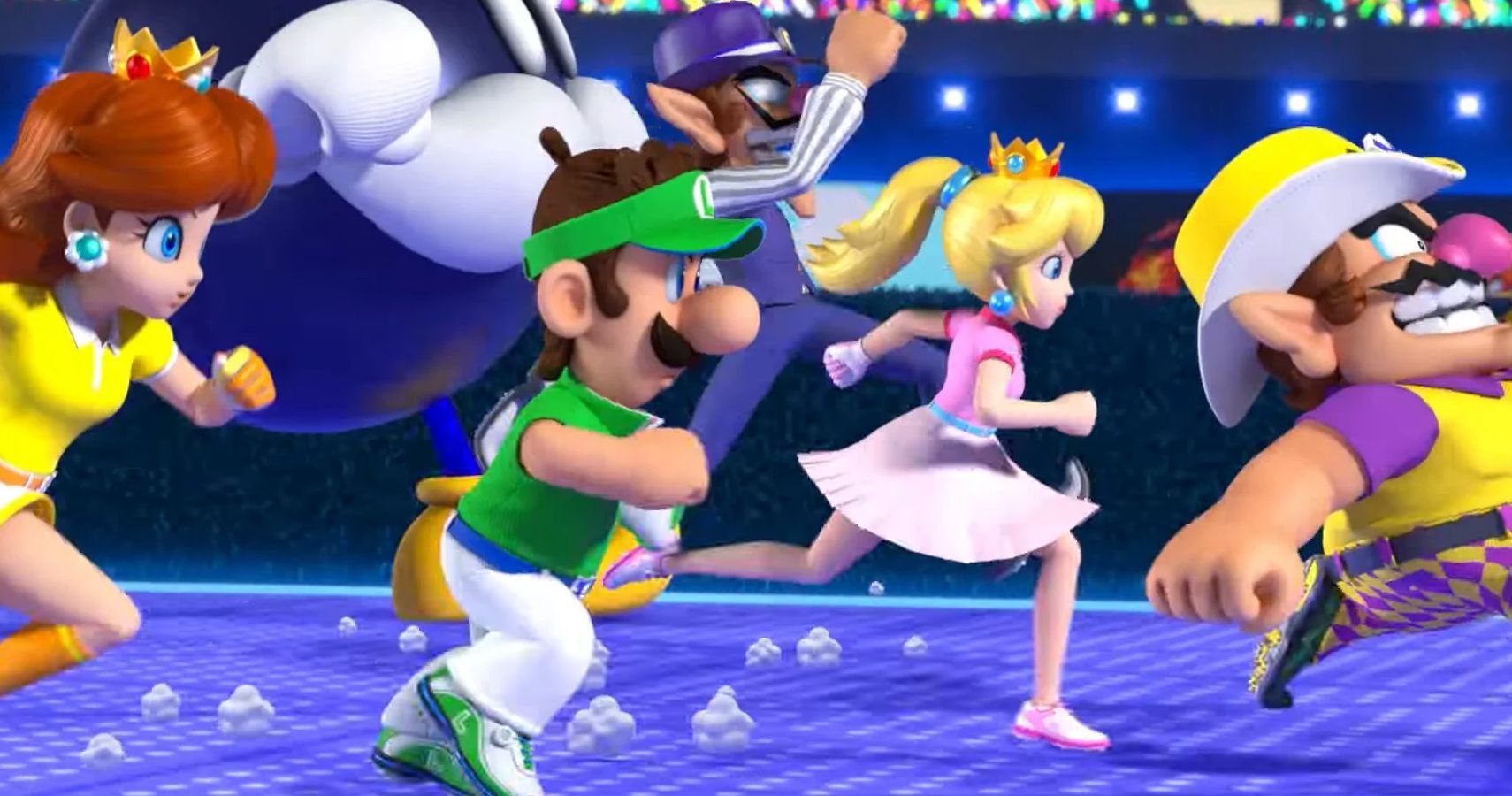 Speed Golf is the big new addition you’ve most likely seen in trailers. This involves hitting a ball towards a flag, of course, but after each shot you take control of your character and run towards your ball at full speed while racing against other players. You’re able to pick up items, avoid enemies, or even use a Super Rush, which speeds you across the fairway, knocking away opponents and their balls. You have to carefully manage your stamina to race your pals to the flag, while also keeping in mind the weather conditions and what club you’re using. It’s a fun spin on the traditional golf formula – but oh no, you can only play Speed Golf with two players maximum on a single console. If you want the full-fat four player experience, you will need additional consoles, not just extra controllers. You can play online of course, if you’re looking to either punish online strangers, or spend some time with your Switch friends.

Battle Golf is the same deal. It takes the mechanics of Speed Golf and places them in a battle arena. These arenas aren’t natural golf courses with weather and nature at your back. Instead, they’re closer to Mario Kart’s Wario Stadium, with a crowd of roaring Toads cheering you on as you race to become the first player to sink your ball into three holes. Each time you get a ball in (which is official golf terminology, by the way), you’ll be teeing off from wherever you sunk it, blasting your balls around the arena until you’ve had your fill. I told you I know what I’m talking about.

The Cross-Country, or XC Golf, works in a similar way. You’re given a huge map with multiple holes and courses, and then tasked with sinking a ball into each hole within a certain number of shots. It can be tough, but the biggest problem with it is elevation. Getting your ball up a cliffside often requires a tornado to whisk it – and your character – into the air, so lining up that shot can be a frustrating experience. These twisters are lined up along the sides of cliffs to make it simple to get your ball onto high elevations, but unfortunately it can be a bit more finicky than that. Getting that ideal shot drastically slows down the speed of the game, and just makes it feel tedious instead of fun.

There’s a lot to learn in Mario Golf: Super Rush, and luckily the Adventure Mode is here to help you learn everything you need. New techniques and courses are doled out at a slow pace, which allows you to effectively use and master each skill as it’s introduced before learning new ones. The best part is that the Adventure Mode never feels laden with tutorials, even though it absolutely is. Luckily they’re tucked into the main game just neatly enough to never feel bothersome. 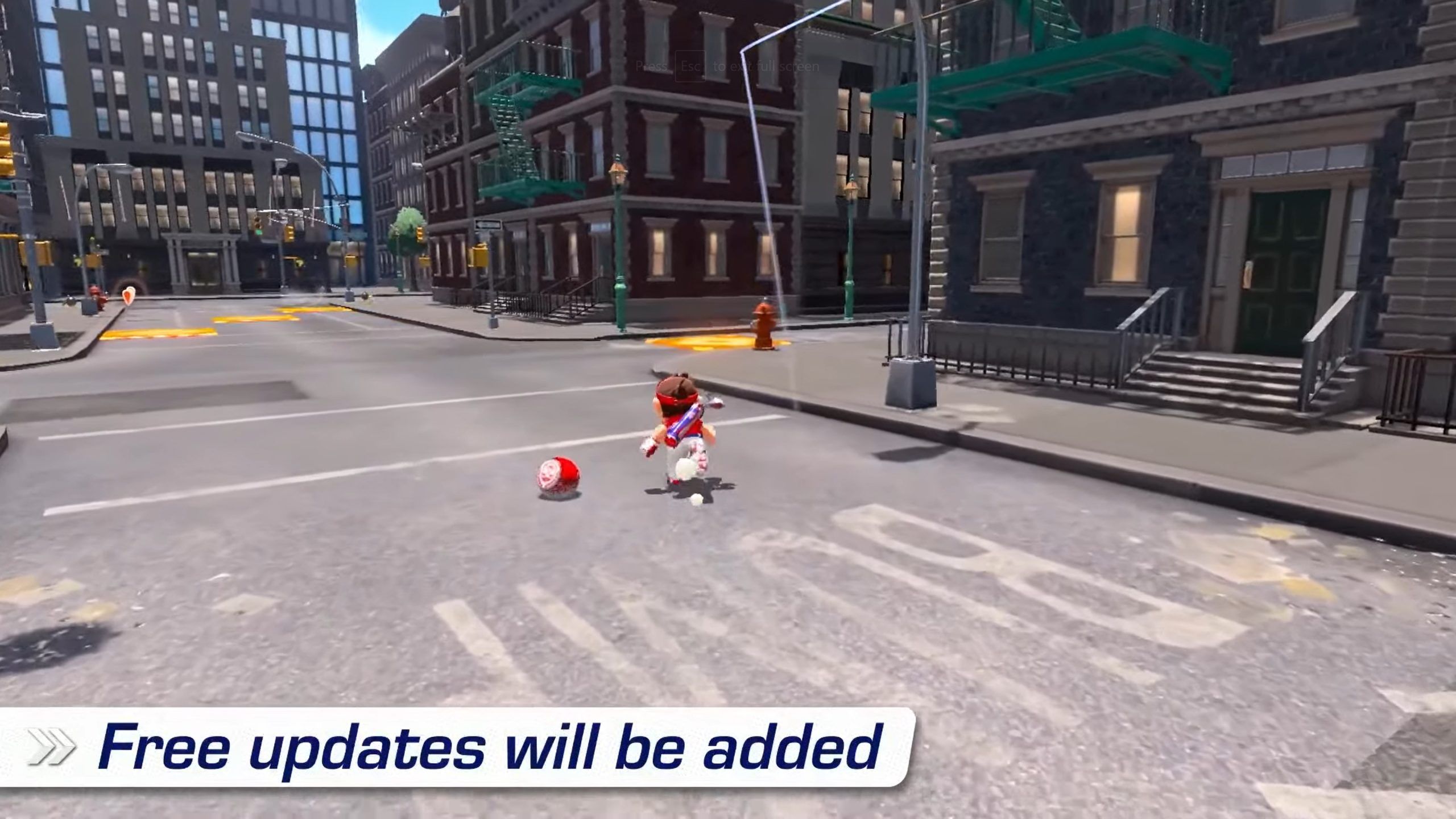 Exploring the small golf settlements in Adventure Mode is fun, but very limited. There are essentially multiple small towns or villages that have been set up specifically for golf, and each area has its own distinct weather conditions – storms, an arid desert, lava, ice, you name a typical Mario platformer theme, and it has been transposed into a golf course here. Each of these weather conditions changes how the balls interact with the environment too, with desert sands bringing balls to a halt, while icy plains will have your balls rolling endlessly after being struck. The small towns themselves are just a shell for your adventure, and it never feels worthwhile to actually interact with the NPCs that populate them, except when you wish to buy some new equipment.

Ultimately, the Adventure Mode is short-lived, but you’ll enjoy your time with it while it lasts – it at least feels more engaging than the Story Mode we saw in Mario Tennis Aces. Still, you can’t help but wish there was something more to it. If you want to make the most of Mario Golf: Super Rush, you really need to play with friends. Once you’ve finished the Adventure Mode by yourself, there won’t be many reasons to return to it unless you have a pal by your side.

Mario Golf: Super Rush is a Mario sports game, and as is par for the course (sorry) with such titles, it’s best when played with friends. You’ll need to play it solo for a while to unlock all of the courses, mind, but once that’s done, this is an experience you should save for when the pals are either coming to visit, or when they’re ready to play online with the gang. Super Rush is an excellent golf game, but the fact that only one of the advertised modes can be played with three-to-four players simultaneously on a single console is a little bit disappointing. Still, this manages to be the best Mario sports title on Nintendo Switch, and a great multiplayer gem for low-energy gatherings with pals.