Mass Effect 2’s Most Difficult Choice Involved Kasumi, Her Grief, And The Graybox

It’s been 11 long years since Kasumi’s Stolen Memory DLC for Mass Effect 2 originally launched. That’s a lot of time and a lot of life since my first encounter with the master thief. I’m a different person now than I was back then, with over a decade’s worth of new experiences that have shaped how I enjoy things. As I’m revisiting Mass Effect 2, I realize that meeting Kasumi this time around stings a little bit more than it did back in 2010. Kasumi has always been a favorite squadmate of mine, but with my age comes a new understanding of her trauma, her grief, and why the galaxy’s sassy thief seems permanently stuck in one moment.

I realize life is brutally unfair, and most of us have probably lost someone we loved. It knocks the air out of you, everything stops, time stands still, and you feel permanently and hopelessly stuck. I’ve been there, too, and I’ve looked at all of my favorite stories a little differently since. I search for pieces of my loved one in those tales, ways I can relate, things that they would love.

And now I’ve done that with Kasumi’s story in Mass Effect 2. As I reunited with her, it was business as usual. I’ve always understood her as someone struggling to cope with loss, but I easily glossed over it all those years ago. It was early on, just after her introduction, that I realized that I have been Kasumi. I still am Kasumi. A lot of us, unfortunately, are Kasumi. It was cathartic. 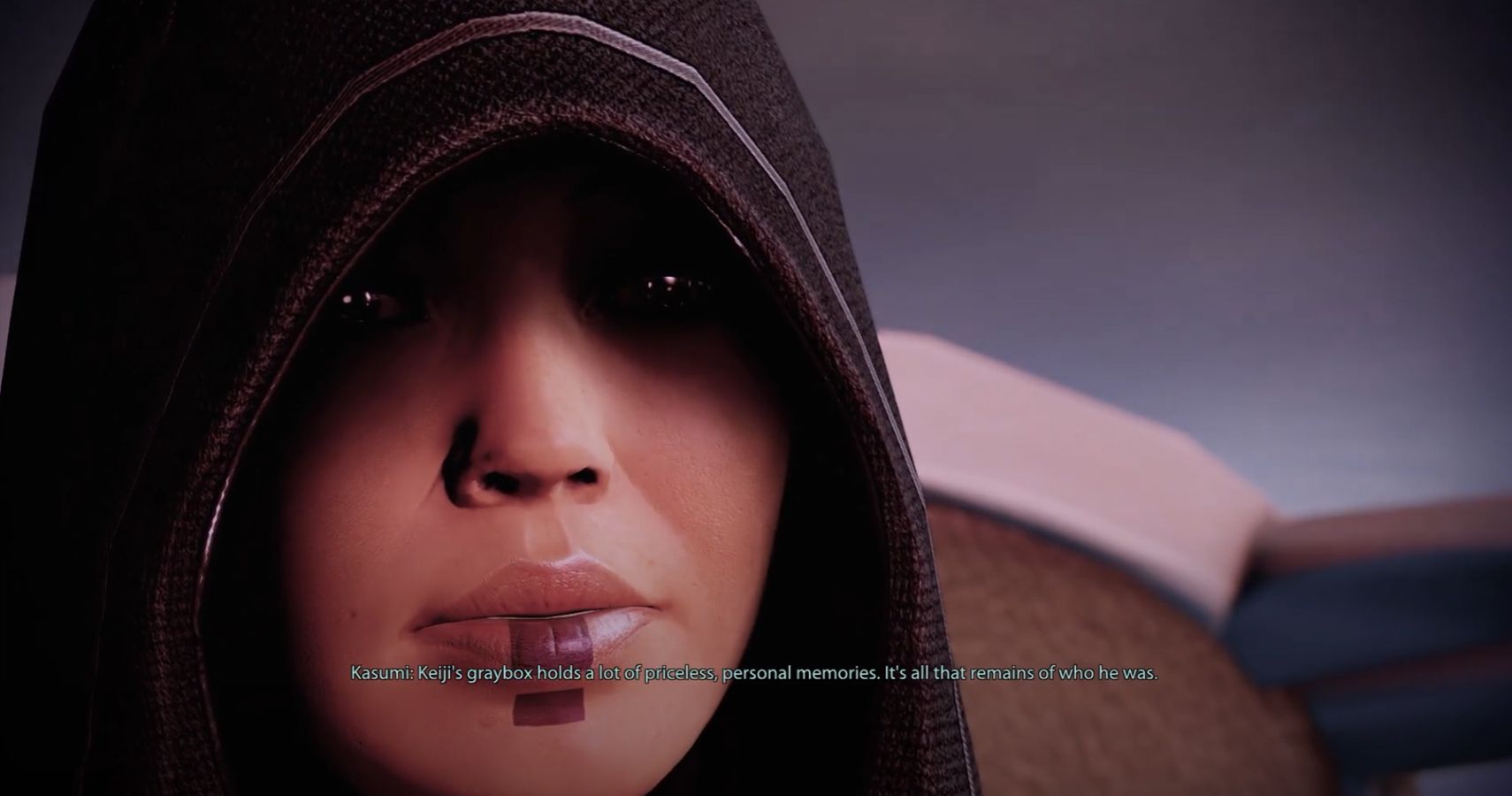 Kasumi’s ultimate goal on your mission together is to steal the graybox taken from her lover, Keiji Okuda, by Donovan Hock on Bekenstein. The graybox is a small implant that takes snapshots of a person’s memories, and in the custody of a master thief, it holds plenty of secrets Mass Effect’s worst criminals are desperate to obtain, and willing to kill for. After Keiji is murdered, Kasumi makes it her mission to retrieve this tiny device – not for its monetary value or revenge, but for the chance to be with Keiji in some capacity one last time, even if it’s imperfect and fleeting.

“Keiji’s graybox holds a lot of priceless, personal memories,” Kasumi tells Shepard almost casually. “It’s all that remains of who he was.” She’s certainly bothered, but hiding your grief is a skill. It’s one you hone every single day after loss, and slowly, over time, you become an expert in concealing your hurt. Kasumi has always been sneaky, but she has moments where she unravels, giving you small glimpses at her inability to move on. She’s hunting to preserve what little piece of Keiji remains – when someone passes, you don’t get to make any new memories. You cling to what’s left.

Eventually, Kasumi and Shepard retrieve the device and Kasumi is able to reunite with a virtual version of her former partner. She’s not particularly interested in the major secrets stored away in Keiji’s memories, though. Instead, she beelines it to what she’s really after – visions of them together. 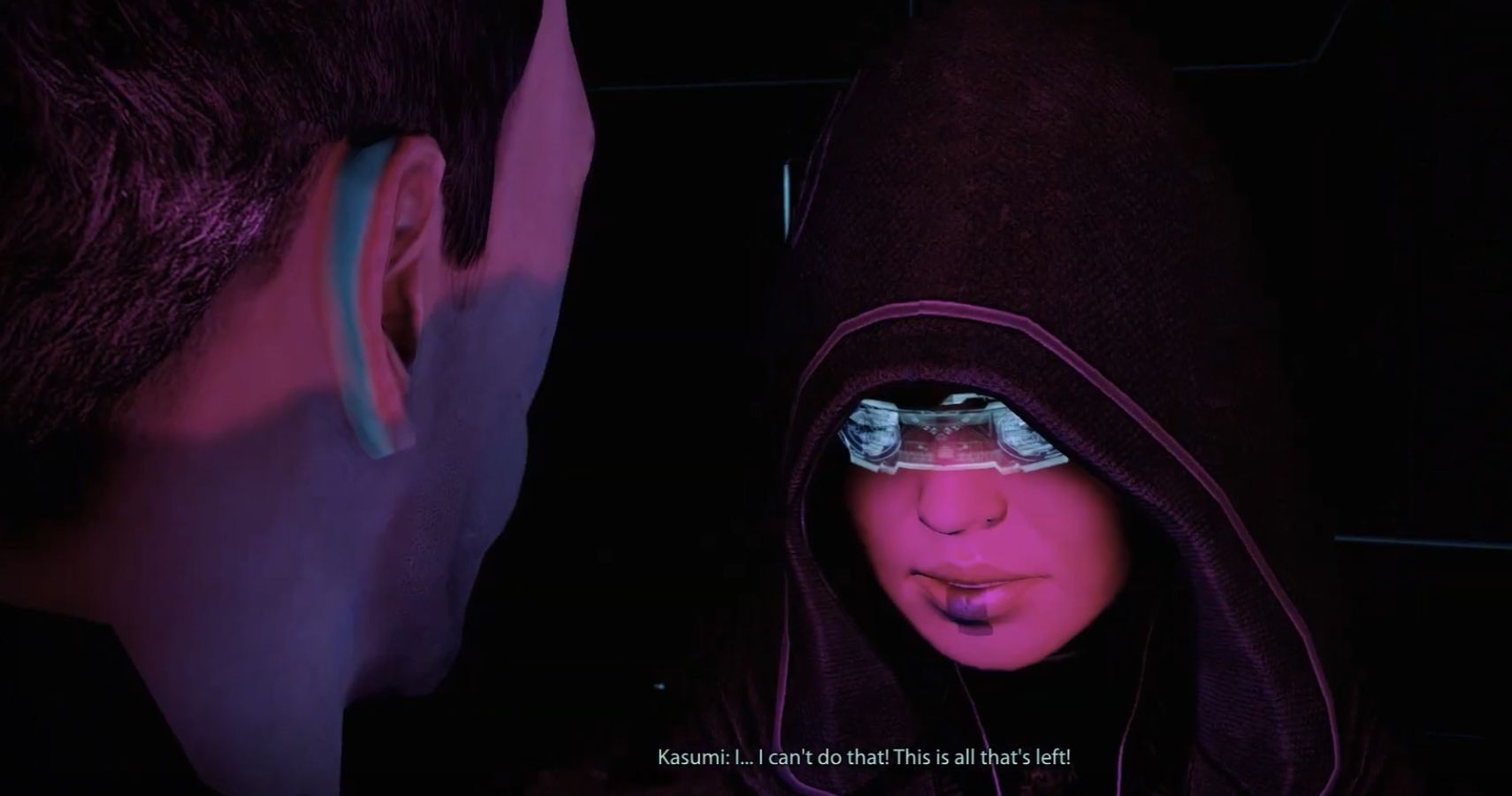 When Keiji asks her to part with the graybox, to destroy the memories that live there, Kasumi is distraught. Now she’s got a choice to make – She can either keep Keiji’s graybox, the elusive and invaluable memento she has been tracking down for X amount of time, or destroy it. Keiji has asked that she do the latter – an option she’s naturally opposed to – but keeping it means there’s a treasure trove of information on this one device that endangers the Alliance. For all of these years, I have always easily selected destroy. This time around, however, I hesitated – this time, I kept Keiji’s graybox.

I still can’t tell you if that was right or wrong. It’s not like it particularly matters since we know how Mass Effect ends, but I was still so hung up on the option for the sake of Kasumi. I’ve been where she is. A purgatory between choosing to move on and feeling like you’re letting go of what little is left. An overwhelming fear of forgetting the small details about your loved one – the way they sounded, your inside jokes, their expressions, and tiny mannerisms. You either keep the graybox or destroy it, but either choice destroys you. In reality, there is no good option. 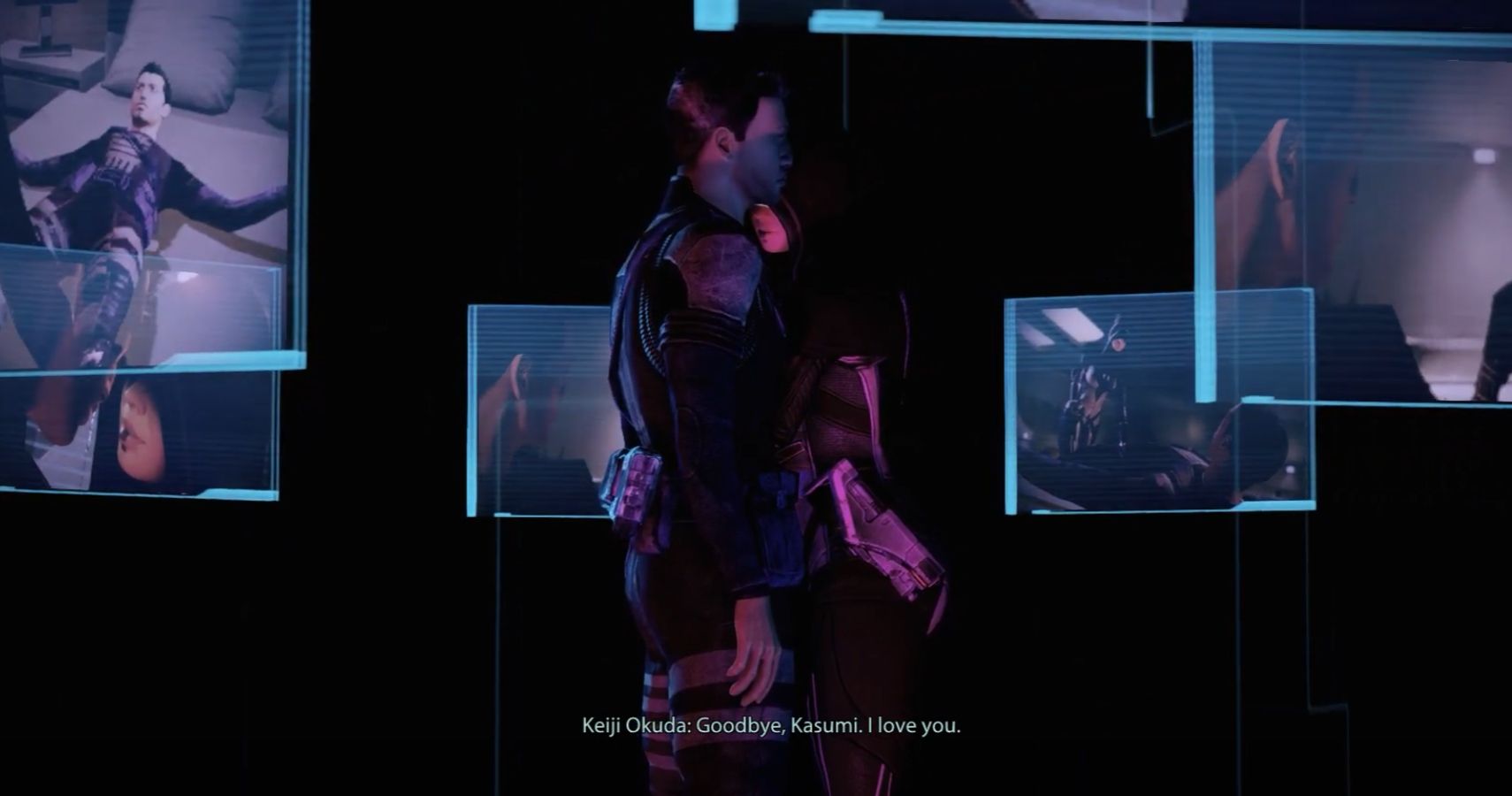 I’ve seen Kasumi’s attachment to the graybox described as unhealthy, even obsessive. At the end of the war with the Reapers in Mass Effect 3, you’ll see her holding the device, still clinging to memories of Keiji. But honestly, if you have grieved for someone, you know that things don’t always get better. People don’t always neatly move on. It’s only now, nearly 11 years later, that I realize I don’t care about the Alliance or covering for it. I sympathize with Kasumi and her “unhealthy” coping mechanisms. I let Kasumi hold onto the graybox because I understand what it’s like to obsessively collect the remnants of someone who’s gone, even if everyone around you judges you for it.

Ultimately, Mass Effect doesn’t handle grief in any standout capacity. I think other games have tackled it better, but there’s something about Kasumi’s small moments where she steps away from her playful persona and reveals those struggles that caught me off guard in my new playthrough. So, at least this time, I will leave Kasumi to her grief. Maybe in a few years, I’ll change my mind and destroy the box to try and force her to move on. But right now, I’m not ready to move on either, so I’ll grieve for Keiji with her.