Mojang revealed a new Minecraft spinoff at last year’s Minecon event, then seemingly took it back underground. Minecraft: Dungeons seemed like an interesting idea, with teams of four battling monsters in classic dungeon-crawler style adventures, but since that announcement we’ve heard virtually nothing else about the project. Fortunately, that’s about to change. Mojang is ready to share more information about Minecraft: Dungeons, and we were able to sit down with executive producer David Nisshagen in Mojang’s Stockholm studio and pick his brain for details.

Development on Minecraft: Dungeons began about three years ago, when an internal team of a few developers was working on a small single-player campaign. As it turned out, the team thought they were onto something fun, so they expanded its scope to include up to four players. That doesn’t mean you have to party up when you want to play, however. Solo players can venture out against the evil Arch-Illager and his monsters, and friends can drop in and out – with difficulty adjusting accordingly.
Players aren’t locked into particular combat roles, even though archetypical styles such as mages, rangers, and melee attackers are present. Rather than having innate skills and abilities, players can change their role every time they don a new piece of gear. Put on heavy armor, Nisshagen says, and you’re a tank. Or put on something lighter, and you’re faster and might excel with ranged weapons. “It’s like, do you want that cool thing? Go find it and wear it or wield it,” he says. 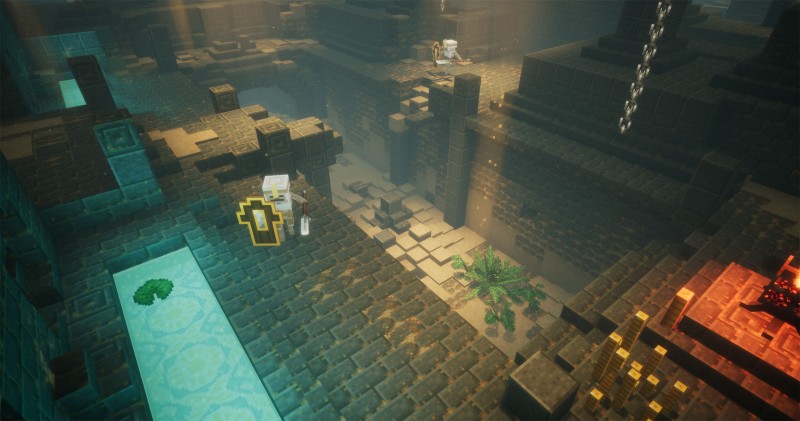 Minecraft: Dungeons is focusing on action and adventure, so players aren’t going to be building or mining as they quest. Other elements are drawn from the main series, when appropriate, such as enchanting. Originally, Nisshagen says the team experimented with having players use the system that’s in the base game, but it proved to be unwieldy and complicated for the faster pace they were aiming for. They’ve come up with a compromise that gives players agency over how enchantments fit within their playstyle without grinding things to a halt with excessive menu manipulation.

“Think of it like this: A sword drops. The sword has a couple of different enchantments options,” Nisshagen explains. “You pick one of them and enchant it with that. The next sword drops. It has the same look and feel and combat animations and all of that stuff, but it has different randomized enchantments attached to it. One of them can be super powerful for area of effect attacks. The other could be, I don’t know, poisons enemy over time. Even if it’s the same base item, they have vastly different properties on them.” Players can also purchase weapons and gear with emeralds they pick up from defeated foes. Some items grant defensive abilities for the whole team, too, such as healing auras that protect party members – provided they stay within range of their friends.

The original trailer showed subterranean dungeons, but Nisshagen says the game takes advantage of the variety Minecraft is known for. “There are some levels or some biomes that are on the surface that are more open and sprawling.” I wasn’t able to completely pin him down on the overall structure of the game, but he said players could go back and explore areas that they’d already visited, and that there’s something similar to a hub world.

Levels are procedurally generated, which made me wonder if players would be able to share particularly interesting world-generation seeds with friends, as in Minecraft or The Binding of Isaac. He said that there are some passionate speedrunners on the team, and they recognize the importance of being able to have some kind of even playing field to accommodate that playstyle. He said he couldn’t make any promises, but it’s something they’re considering.

Even without the building, Minecraft: Dungeons manages to capture the silly essence of what makes traditional Minecraft such a joy to explore. In addition to battling familiar monsters like skeletons and spiders, Nisshagen says players will get to see some all-new mobs as well. It didn’t look particularly threatening, but one little guy seems like he’s going to both delight and frustrate players: an adorable little key, who jogs away when he spies the heroes coming. You have to hit him a few times before you can pick him up, which looks like a task that’s going to be easier said than done.

We’ll know just how fast that little guy can run later this year, when Minecraft: Dungeons comes to PC.