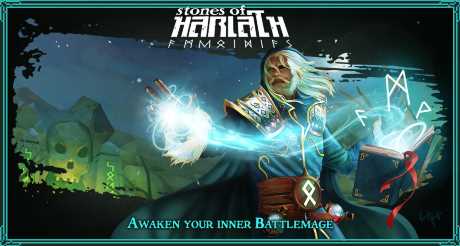 If you love some classic role-playing game (RPG) adventures, exploring dungeons and battling monsters, and just so happen to own an Oculus Quest then keep an eye out for Stones of Harlath next week. It has just appeared on the Coming Soon section of the Oculus Store, available for pre-ordering with a discount.

Developed by indie team Garage Collective, Stones of Harlath promises a magic-filled experience with retro sprite-style visuals and physical combat. You play a mage stranded on an island, using your skills to explore the six dungeons located on its shores. In between dungeon crawling there’s the Theatre of Pain, an arena location where you can battle plenty of monsters.

You’ll have the ability to utilise close combat weaponry like swords and maces in conjunction with shields to take done, bats, rats and bigger nasties lurking in the dungeon corridors – there will be 25 varieties in total. Or unleash some of that magical power by drawing runes to freeze enemies, fire bolts of lightning or bend time to your will. You’ll also be able to enhance your arsenal with magical powerups.

As you progress all your knowledge will be stored in a Grimoire, helping you reference spells – there will be a total of 12 – enemy info, a quest guide and the ever-useful mini-map. Because once you’ve unlocked a dungeon it can be replayed at will, so you’ll probably want to head back once you’ve upgraded a few times to see if anything was missed.

Stones of Harlath is currently scheduled to launch for Oculus Quest on 3rd June 2021, offering a pre-order discount of 12%. The videogame is also listed on Steam for Oculus Rift but with a much later arrival date, 15th July. Check out the first trailer below, and for further updates on both platform releases, keep reading VRFocus.