As with many of FromSoftware’s catalogue, Sekiro: Shadows Die Twice is a difficult game. Because of this, you should expect to die a considerable amount.

Sekiro offers a chance at redemption with the Resurrection mechanic, but this comes at a cost – each time you bring yourself back from the brink of death (and keep things such as skills and inventory items), you risk being infected with Rot Essence.

This can also spread to other characters in the world, stymying progress until their infections are cured.

The Rot Essence lowers your chance to receive a buff called “Unseen Aid”, a stat which gives a chance to recover experience and Sen when dying.

The chance of earning Unseen Aid is a slither under a one-in-three chance, but the Rot Essence eats away at your chances. You can check your Unseen Aid percentage in your “Equipment Screen” in the pause menu.

Each Rot Essence you’re carrying can be found under key items in the Inventory menu, and each has a name.

For example, “Rot Essence: Timid Maid” means you’ll need to cure the Timid Maid before you can progress any of the story missions from that character.

Early in the game, you’ll encounter a physician named Emma who is attempting to create a cure for the disease – its full name being Dragonrot.

Eventually, you’ll find the option to collect blood samples from certain characters. Deliver this to Emma, and after some time she’ll offer the following items: Dragon’s Blood Droplet, and Recovery Charm.

The next time you’re at a Sculptor’s Idol, you’ll be able to select the Dragonrot Restoration option from the menu which will cure yourself and other characters afflicted with the disease.

Once you’ve done this once, Dragon’s Blood Droplets become a consumable to be purchased from vendors. You’ll want to use them sparingly, as there are a finite number of them in the game.

Avoid using them before difficult battles, as constantly dying and reviving will cause Rot Essence to spread again. Of course, using it to progress story quests with poorly quest-givers is a much smarter use of them.

Sekiro: Shadows Die Twice has received critical acclaim at launch, and is the first game from FromSoftware that is published my Activision.

It is the developers first non-VR title since Dark Souls III, which released in 2016.

Our very own Rebecca ‘I’ve platinumed every Soulsborne game’ Stow called it “harder than previous FromSoftware games”, but awarded it a 5/5 score in her review.

You can get a small preview of that review, just below, but click through if you want to read the full analysis. 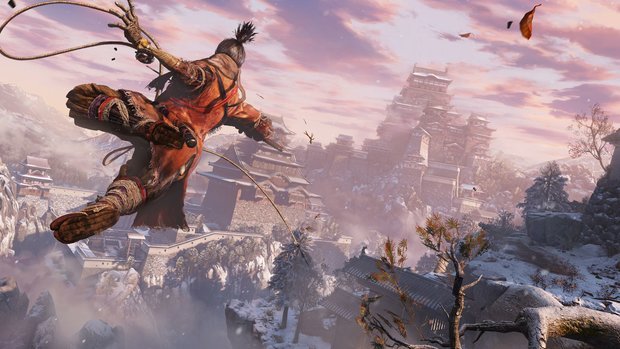 FromSoftware hasn’t strayed from their infamous difficulty levels. Sekiro: Shadows Die Twice is just as, if not more difficult than, the Dark Souls and Bloodborne games.

Without the use of a shield, you’ll be forced to time each attack perfectly so you can transition between attacking with your katana and defending yourself. Get it wrong and you’ll often be killed in one enemy strike.

There’s a diverse variety of enemies in Sekrio, each wielding their own set of moves and weapons. Mobs and hordes linger within dilapidated villages and snowy mountain crags, often accompanied by much stronger warriors. It’s brutal from the opening cutscene.

Though Sekiro feels impossibly hard at times, the level of euphoria you experience when delivering a death blow to a tricky boss or when you finally clear a castle grounds of all enemies is almost unparalleled.

This isn’t a game that feels unfair, it’s a game that lets you know there’s no button mashing or “cheesing it” early on, and then delivers on that promise throughout the entire campaign.

– Follow the link above to read our full review