The Nintendo Switch might have the market cornered on fun and accessible couch co-op party games, but don’t tell Bit Ink Studios that. Super Hiking League, available now on Steam, stands with some of the best party games out there with its 8-bit+ graphics, retro soundtrack, and some incredibly fun, intense, and addicting tower climbing action.

Race Ya To The Top!

Although Super Hiking League has a story in its Arcade mode, it’s not really the backbone of the game. Players begin the game as Nelson, an outdoorsman, and member of the Super Hiking League, enjoying a sunny day on the ocean in his high-powered speedboat. All of a sudden, he runs into an evil wizard who destroys a nearby mountainous island on his quest to make the world completely flat. As an avid hiker, Nelson can’t stand for such a world, thus embarking on a quest through multiple settings, competing against other hikers to collect the wizard’s magic gems and put a stop to his evil plans. 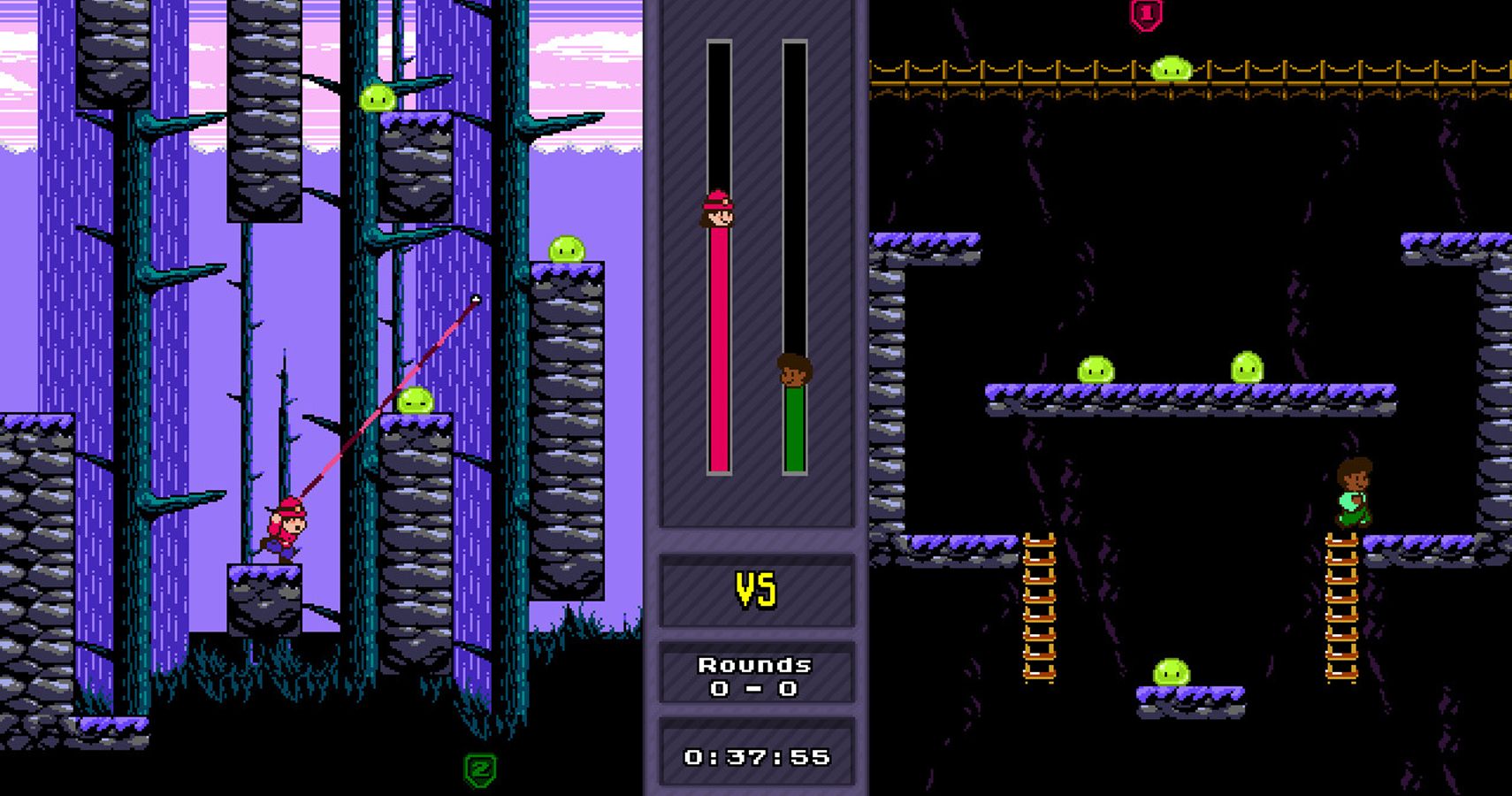 Matches consist of the best of three rounds. Super Hiking League’s split-screen levels are comprised of various platforms, slime blob enemies, and other obstacles, allowing for jumping and simple platforming mechanics as players make their way to the top of the level to be the first to snag the awaiting gem. Moving quickly is the name of the game, but players can also go on the offensive by attacking one another with their sword, knocking other hikers off of platforms and gaining an advantage. The best part of Super Hiking League, however, is the grappling hook mechanic.

Instead of jumping from platform to platform, players can use their grappling hook to scale the levels. Most of the levels in Super Hiking League contain flowers that grappling hooks can attach to, allowing players to shoot their way up in a bungee-like type of way. Timing a grapple-and-bounce perfectly results in an added speed boost, shooting players upwards even faster. Stringing a few of these perfectly executed grapples is not only the best strategy for success, but is incredibly satisfying when it works. After all, by no means is Super Hiking League easy.

Cliffhanger, Eat Your Heart Out 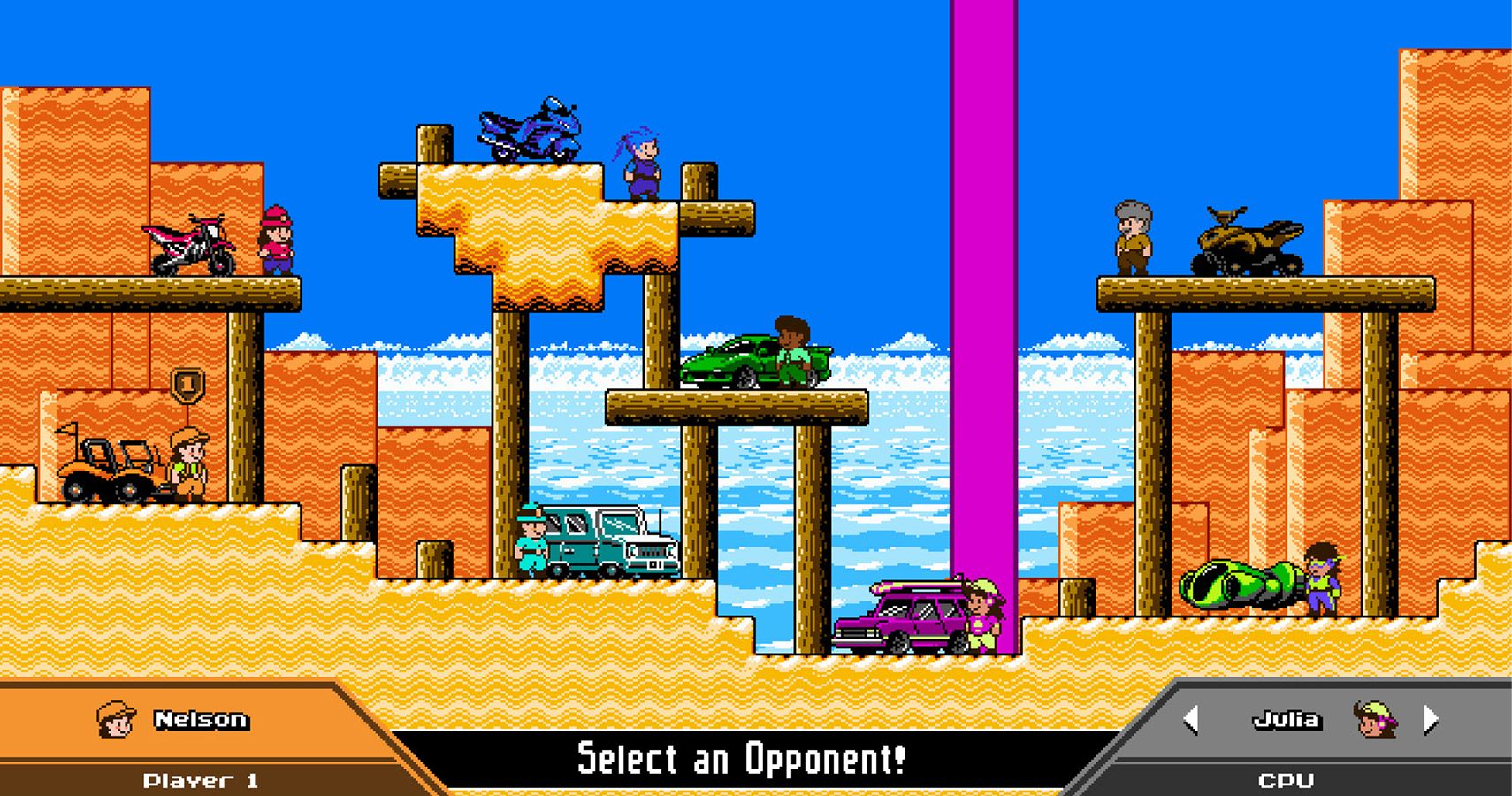 While its premise is simple, even on its normal difficulty, Super Hiking League is a challenging game. Going through the 20-plus levels requires patience and incredible attention to detail, as the slightest wrong move could be the difference between winning the round or failing miserably. Difficulty increases as players progress through the levels, with a few of those levels being frustratingly challenging (at times, it’s almost as if the game is trolling you). That said, the frustration was never enough to make me want to stop playing. If anything, it made me more determined to beat the level.

Beyond its Arcade mode, which is how players can unlock more levels and playable characters, Super Hiking League has a Race mode, Time Attack mode, and Versus mode, allowing for a local session against a second player. An online component would be a wonderful feature to have, especially since the game could lend itself well to competing online against the other speedrunners.

Super Hiking League shines as a single-player game, and even though the game is only available on PC, it still works as a fun two-player experience as long as you have two D-Pad controllers. With a charming retro soundtrack and graphics that work perfectly with the overall fast-paced gameplay, Super Hiking League is a title that fans of NES-era will fall in love with.