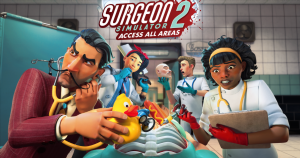 This game gets a lot right – fun, frantic tasks, plenty of humour, silly graphics and a perfect tone.

But it lets itself down on gameplay.

Because at its worst Surgeon Simulator 2 is nigh-on unplayable.

Trying simple things like picking up a syringe to inject your patient, or a hammer to crack his ribcage is often way too difficult.

And while there’s a fun in the chaos that ensues, ultimately after a while the lack of coordination and your ability to control your medic is frustrating and makes you want to throw the joypad at the wall.

This budget game is £15 on Steam and the Xbox store right now, although if you’re paying a monthly subscription for Xbox’s Game Pass it is one of the ‘free’ games available there.

Bossa Studio start strongly when you boot up for the first time.

There’s a very British voiceover guiding you a bit like Stephen Merchant does in Portal from room to room as you head towards your first – and only ever patient – Bob on the operating table.

They promise a ludicrous medical simulator and deliver in spaces.

You’ll find yourself, and in co-op mode four of you, dashing around the surgery grabbing various tools to ‘fix’ poor Bob’s broken body.

That means pulling off his head almost ACME-cartoon style as well as various other limbs that then pour out lashings of blood way beyond what real-life people can take.

You’ve got to make sure you keep stemming the bleeding with yellow injections, while also adding in red injections to boost Bob’s overall blood count so he doesn’t run dry and die on you.

Then there’s tools like saws laying about, even rubber ducks, drink cans and toilet plungers, which you can use to crack open his ribs to get access to the heart and lungs inside for a rather messy transplant.

It’s great fun and the exact amount of over-the-top silliness you’d want from a game like this.

But far too often it’s so difficult to complete basic tasks like picking up a hall pass to get through a door, or throwing a patients head across the room, that it becomes a nightmare for the gamer.

I hear it’s better on the PC version but haven’t played that, so if they do fix the controls and physics-based gameplay on the Xbox version we could well have a cracking little game on our hands.

One with bonkers puzzle modes where you have to find items to progress through lab rooms and an array of potentially endless player-designed levels in Creation Mode that will give this title real longevity.

The creativity is fantastic with dance games, relay races and bowling alley mini-games using Bob’s head as a series of pins, for example.

But it all comes down to control and right now Surgeon Simulator 2 is too broken when it comes to gameplay to really do the great ideas behind the game justice.