Every major boss is memorable in World of Warcraft — because of bizarre lore, a surprising bug, or just being a massive let-down. The final boss is something players spend hundreds of hours working toward over two years.

With N’Zoth closing out World of Warcraft’s seventh expansion, Battle for Azeroth, we’ve compiled a list of every final boss in the MMO’s 15 year history. Here’s a look at what makes these bosses memorable; from Kel’Thuzad in vanilla to N’Zoth in Battle for Azeroth. 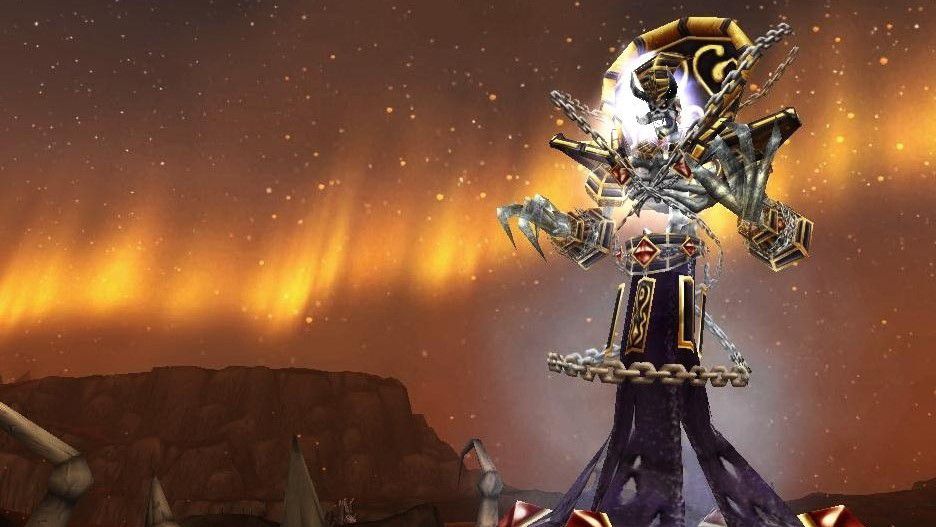 Kel’Thuzad was a powerful lich from Warcraft 3, and servant of the Lich King. He was the first final boss in World of Warcraft history. He waited for players at the end of the Naxxramas raid, but barely any players showed up to fight.

Naxxramas is still legendary for its difficulty, the strangeness of the original Four Horsemen fight, and how few people actually completed it. Only 135 guilds cleared Kel’Thuzad between Sept. 7, 2006 (the day he was first killed) and the launch of the World of Warcraft’s 2.0.1 patch on Dec. 5, 2006.

With 40-man raids, that’s only about 5,400 players. World of Warcraft had around 7.7 million subscribers at the end of 2006, so the percentage of players who heard Kel’Thuzad’s death rattle was about 0.0007%.

Blizzard eventually reworked and re-released the Naxxramas raid — complete with Kel’Thuzad — during Wrath of The Lich King, where many more players took him down. But as the final boss of vanilla World of Warcraft, Kel’Thuzad was nearly untouchable. 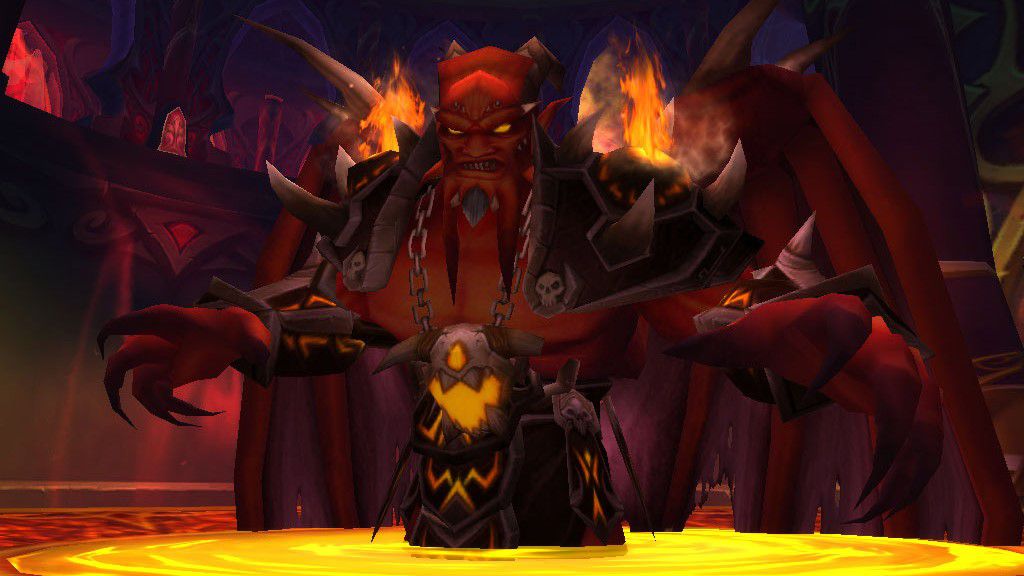 Kil’jaeden is another big bad from Warcraft 3. One of the leaders of the Burning Legion under the Dark Titan Sargeras, Kil’Jaeden is one of the most powerful villains in the Warcraft universe. Kil’Jaeden was the final boss of The Burning Crusade expansion and the Sunwell Plateau raid.

The fight with a half-summoned Kil’Jaeden at the end of Sunwell was a pleasant surprise for players at the time. He wasn’t advertised as the expansion’s big bad, he wasn’t on the box art — Illidan was. Players felled Illidan in the Black Temple raid only to find out that Illidan’s boss, Kil’Jaeden, had come to collect.

The expansion wasn’t over, and players had an even bigger bad to contend with. The fight with Kil’jaeden in the Sunwell was apparently very well balanced, leaving some professional players very excited to have a real test after the 10 month content drought between Black Temple in May 2007 and The Sunwell in March 2008. But players didn’t officially kill Kil’jaeden in 2008, and would need to wait nine years to finish him for good in the Tomb of Sargeras raid.

This wouldn’t be the last time Blizzard would surprise players with a true final boss or leave a raid boss alive for a secondary encounter. Those keyed into the story could see that Kil’Jaeden would surely pop up somewhere along the line. But it was still a great payoff for players to end the game’s first expansion. 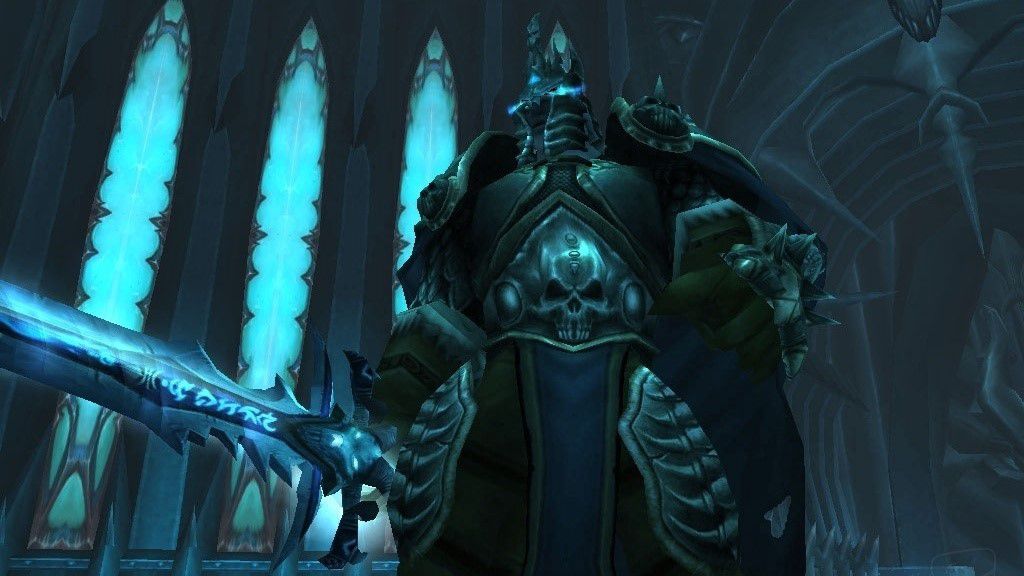 Unlike Illidan before him, Arthas was the biggest and baddest enemy in the Wrath of the Lich King expansion — aside from Halion in the much-disliked Ruby Sanctum single-boss raid. Arthas waited for players atop his castle in the Icecrown Citadel raid, and players had to defeat 11 other bosses before reaching him.

Arthas himself was an incredibly difficult fight, and Blizzard increased the difficulty by limiting the amount of times players could fight him on the hardest difficulty. But Arthas is also responsible for one of the biggest scandals in World of Warcraft.

In this era of World of Warcraft, the world first race was usually determined by who beat the boss on the 25-man difficulty. A guild named Ensidia scored the first 25-man kill on Arthas, but Blizzard took their achievement away due to an exploit.

This was hotly contested by the community at the time, as the exploit simply involved Ensidia’s Rogue players fighting the boss as optimally as they could. Ensidia’s Rogue was using Saronite Bombs — a crafted item — to deal supplemental damage to Arthas. And the bombs caused an unforeseen side effect.

During the fight, Arthas would crumble the arena, opening holes where players could drop to their deaths, and limiting the amount of space players had to move. However, the Saronite Bombs somehow rebuilt the platforms. With the extra space, many of Arthas’ usual tricks became far less lethal, making for an easy kill for Ensidia.

After Blizzard revoked Ensidia’s record, the Paragon guild ultimately walked away with the win on Arthas. But players still talk about Blizzard’s decision to revoke Ensidia’s original kill. 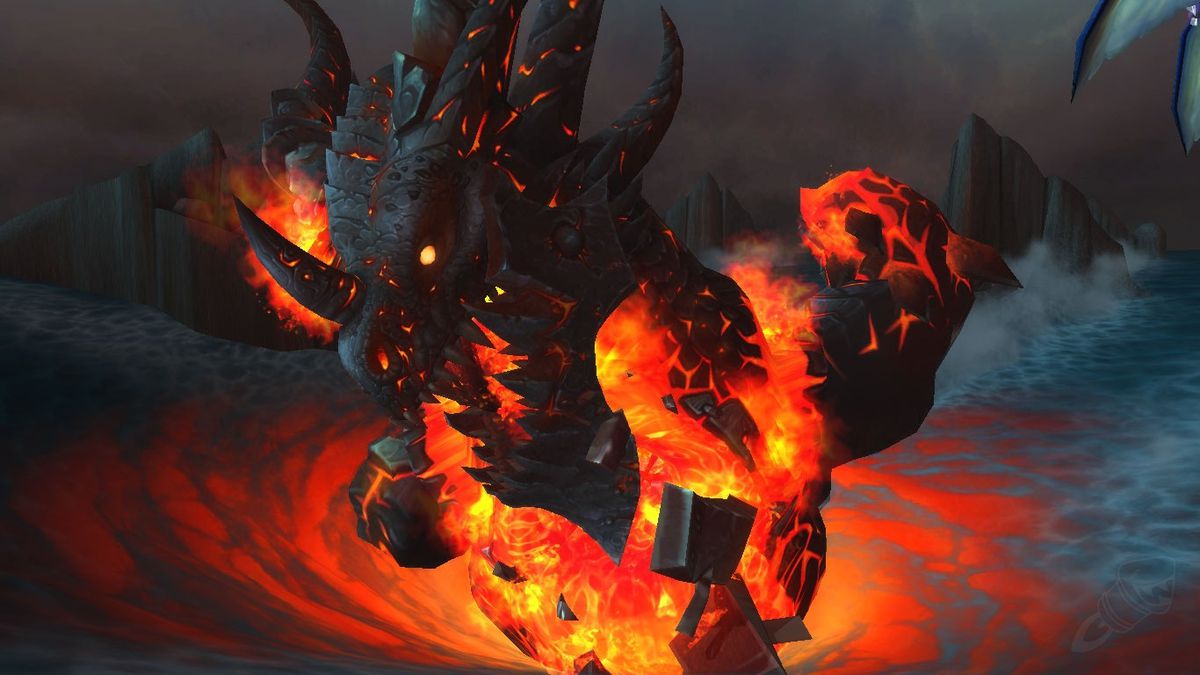 Deathwing during the Madness of Deathwing fight
Image: Blizzard Entertainment

After Wrath of the Lich King and Arthas, World of Warcraft was at its peak. But many players viewed Cataclysm as the death of the MMO. Blizzard destroyed old zones, rebuilt player’s skill trees, and simplified World of Warcraft for a more casual audience. And Deathwing, the corrupted Dragon Aspect Neltharion, was the poster child of this entire strategy.

After months of Deathwing flying around the world and randomly killing players from the skies, Blizzard unleashed the Dragon Soul raid. Deathwing waited for players at the end. But being a massive dragon, Blizzard split his fight into two sections: the Spine of Deathwing and the Madness of Deathwing.

Because of the way Blizzard structured these fights, it didn’t feel like players were battling Deathwing, the giant dragon who’d destroyed so many beloved World of Warcraft zones. Instead, players fought individual pieces of Deathwing, like his spine or claws. They never got a sense of killing one cohesive boss; just damaging his cuticles.

What could have been a cinematic battle with a massive beast just ended World of Warcraft’s worst expansion on a fittingly sour note.

Garrosh Hellscream and the heart of Y’Shaarj (Mists of Pandaria) 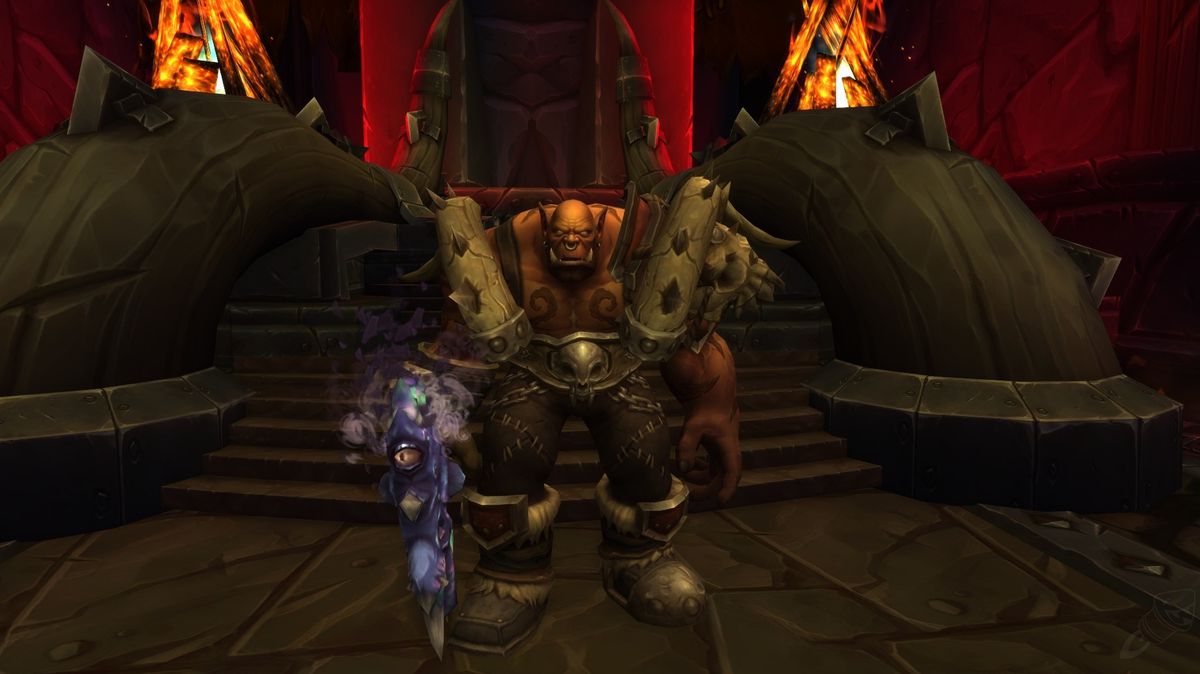 Garrosh in the heart of Orgrimmar
Image: Blizzard Entertainment

The Mists of Pandaria expansion brought a whole new vibe to World of Warcraft. Deathwing was dead, and it was time to visit the land of the Pandaren — peaceful panda people with a Chinese-inspired aesthetic.

Garrosh Hellscream was the current warchief of the Horde faction, and had proven himself not only a war criminal in Cataclysm, but a completely unhinged monster. The end raid of the expansion saw players travel back to the Horde capital city and assault it in the Siege of Orgrimmar.

The final boss against Garrosh was ambitious. Players would load into new areas during intermission phases. It blended the colorful Pandaria aesthetics with the rough metal of the Horde brilliantly. In a secret, Mythic-only phase, players battled in the Alliance capital, Stormwind, via a dark vision of Garrosh. Here, players saw Garrosh’s vision of the future, with main characters like Thrall, Jaina, Anduin, and Sylvanas impaled on spears.

This final fight and raid was cool for longtime players because it took two areas that have always been safe and turned them both into battlegrounds. But no matter how fondly players remember the fight, the death of Garrosh will always be a sour note.

After the raid, players imprisoned Garrosh, but he escaped back in time. During the story of the next expansion, Thrall — often negatively referred to as “green Jesus” — killed Garrosh in a missable cutscene, making the raid fight against one of World of Warcraft’s first original villains feel pointless. 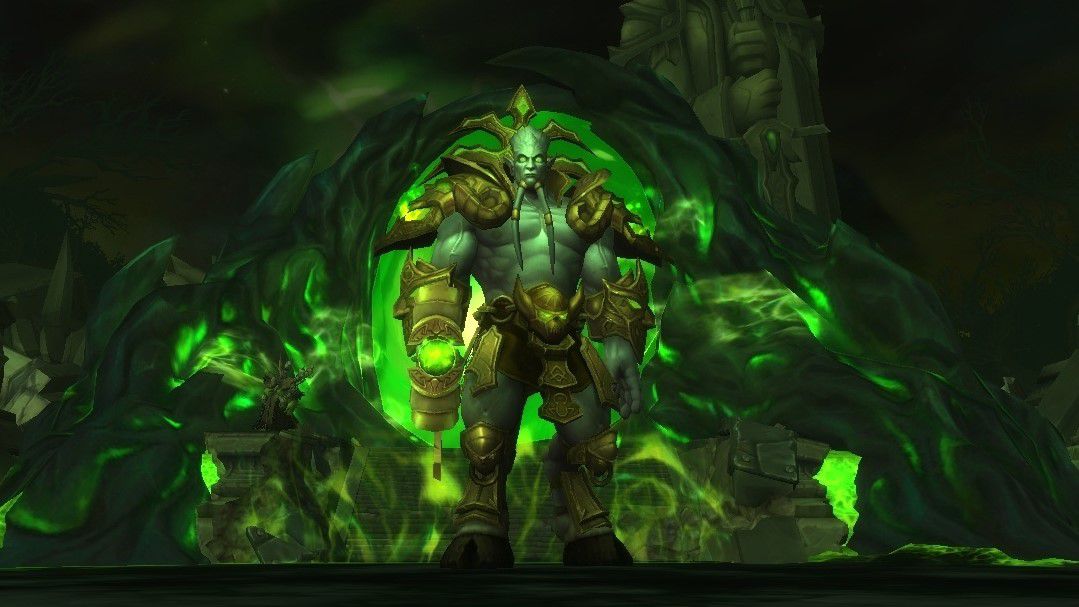 Archimonde standing in front of the portal at Hellfire Citadel
Image: Blizzard Entertainment

Warlords of Draenor took players back in time, to The Burning Crusade’s Draenor, still lush and uninhabited by the Burning Legion. The expansion’s main story followed the Orc leaders of old, rising up using technology from the player timeline — thanks to a time-traveling Garrosh.

Grommash Hellscream — Garrosh’s father, and another hero from Warcraft 3 — seemed like he’d be a big bad at the start of the expansion. But with the cut content, he went from villain to hero instantly. And players went from fighting Orcs to fighting a giant, pale demon.

But in a lore interview, Blizzard employees were still toying with that idea after players supposedly ended Archimonde for good, and discussing if they wanted to maintain it as canon. For lore fans, the inconsistency of the Twisting Nether idea is endlessly frustrating. And as it stands, nobody really knows if Archimonde is dead or not — not even Blizzard.

It’s possible the intended threads for Warlords of Draenor could have led to a coherent shift from Orcs to demons, and built up more concrete lore for the final fight. But with only three raids worth of content, we will never know. 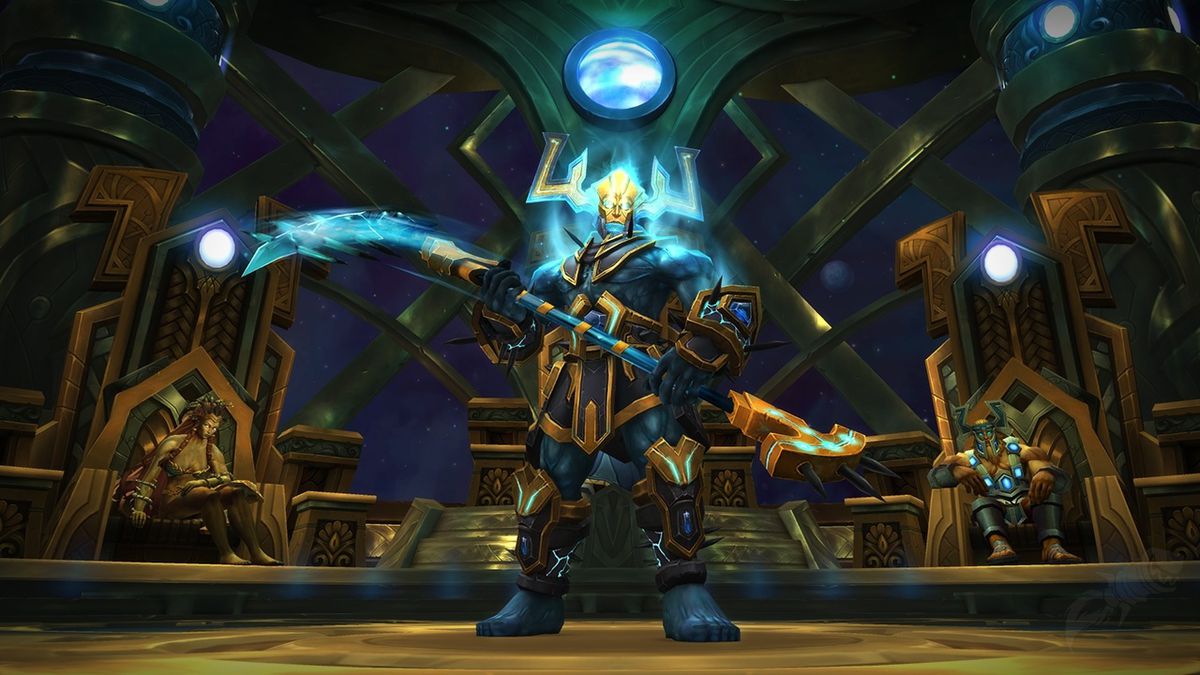 The demons from the end of Warlords of Draenor followed into the next expansion: Legion.

Legion was easily the best World of Warcraft expansion since Wrath of the Lich King, and it seemed players would finally take down the head of the Burning Legion: Sargeras. And they eventually did, in a roundabout way.

In a weird genre twist, Legion’s final two patches added space ships, and saw players travel to Argus — the home planet of the Burning Legion. Players ventured across an alien planet, learning the history of the Draenei, space-goats from Argus that landed on Draenor and became playable in The Burning Crusade.

In the Antorus, the Burning Throne raid, players faced up against the expansion’s final boss: Argus the Unmaker. The entirety of the Burning Throne felt more sci-fi than fantasy, and Blizzard reflected that spacey look in Argus’ design. The fight itself even incorporated buffs from celestial gods, the Titans, and the end saw players flee in a giant spaceship.

The raid was also very lore heavy. Argus was the physical manifestation of the planet players traveled to. And the end of the fight saw the end of the Burning Legion’s story — which started all the way back in 2002. With Argus dead and Sargeras imprisoned, World of Warcraft could finally tell its own story, rather than relying on Warcraft 3’s legacy. 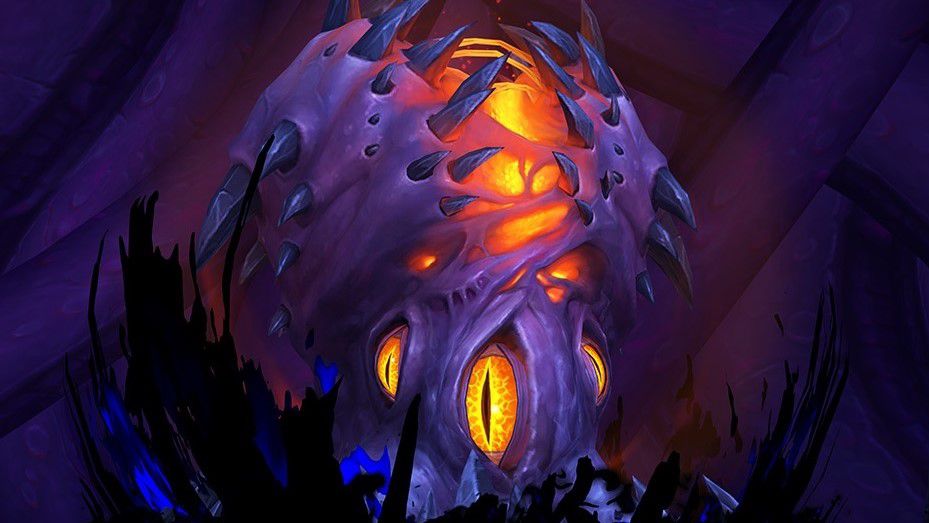 Instead of going in a new direction, Blizzard took World of Warcraft back to the age of Horde versus Alliance. But the conflict wouldn’t last the entire expansion. Battle for Azeroth quickly became the battle to save Azeroth as the final old god, N’Zoth, and his minions began to surface.

Players battled N’Zoth in the Ny’alotha, the Waking City raid. A giant squid monster known as the king of deceptions, N’Zoth proved a challenge for players on the Mythic difficulty. But not all of that challenge was genuine.

While pulling N’Zoth, the US guild Limit ran into a bug where the boss just stopped responding. The guild whittled his health down to about 20%, much farther than they’d gotten previously. When the boss finally started working again — either by a timing miracle or Blizzard’s intervention — he despawned. But he didn’t just despawn for Limit, N’Zoth despawned for all players across American servers.

N’Zoth was also a disappointment for players in the lore department. The Old Gods are huge threats for players and the world of Azeroth — with N’Zoth himself being responsible for the madness of Deathwing, and several other Old Gods appearing as raid bosses in World of Warcraft — but the final cutscene paled in comparison to Legion’s. Instead of a world altering event, the scene showed the player character channeling super energy into N’Zoth and blowing him up.

The N’Zoth fight itself isn’t interesting either (as you can see in Preach’s video above). Instead, players will always remember N’Zoth for the bug Limit encountered. Limit eventually killed N’Zoth, claiming the world first title. But long after players forget the race itself, people will continue to talk about the boss that reset an entire region.

The final bosses from each era of World of Warcraft haven’t always been good, but they’ve always had something worth remembering.