The Legend of Zelda: Link’s Awakening is the perfect Zelda for younger fans

It’s weird to think of a popular Nintendo franchise as being intimidating, but the Legend of Zelda series has, over the years, gotten to that point.

There is a lot going on in these games. I’ve played every major Zelda release, and the newer games are often informed by the older ones, making them far easier for seasoned players. I know to always check under pots for secret switches and to shove suspiciously placed rocks, but players new to the series may miss secrets and details that are obvious to me. The Zelda games, for better or worse, have their own play language that has evolved across decades of games.

There’s no great way to ease someone into the Zelda series, especially someone younger who might be overwhelmed by the scale of recent entries. Which is why the new remake of The Legend of Zelda: Link’s Awakening on Switch feels like the perfect gateway drug.

We have to go back

Link’s Awakening on Switch is effectively the same game that was originally released on Game Boy back in 1993. The graphics are dramatically different, sure, but otherwise the two releases are damn near identical.

The first two Zelda games on NES were broad, directionless, and incredibly difficult for their time. Link’s Awakening is more guided and, frankly, easier. Within moments of waking up, Link is given a task: Head to the beach to find a sword. Link’s Awakening gates its map so the opportunity for exploration is extremely limited at the outset, allowing players to access just a few small areas.

Those first few areas, including a forest teeming with moblins, have limited threats, offering an opportunity for a new player to wrap their heads around a relatively small set of decisions about what to do next. Of course, over time, those options broaden, with new equipment opening up new regions of the map, but it’s hard to get into trouble before that happens.

The upside of being welcoming to newcomers comes with a downside: The bulk of Link’s Awakening will be incredibly easy for anyone who has played a Zelda game in the last decade. The first four dungeons are simple and can be breezed through at lightning speed. The hardest parts of the game really boil down to finding where it wants you to go next, and usually, an owl shouts those guideposts at you. I did find myself stumped at one point in trying to find a pathway across a river, but these moments were rare and fleeting. 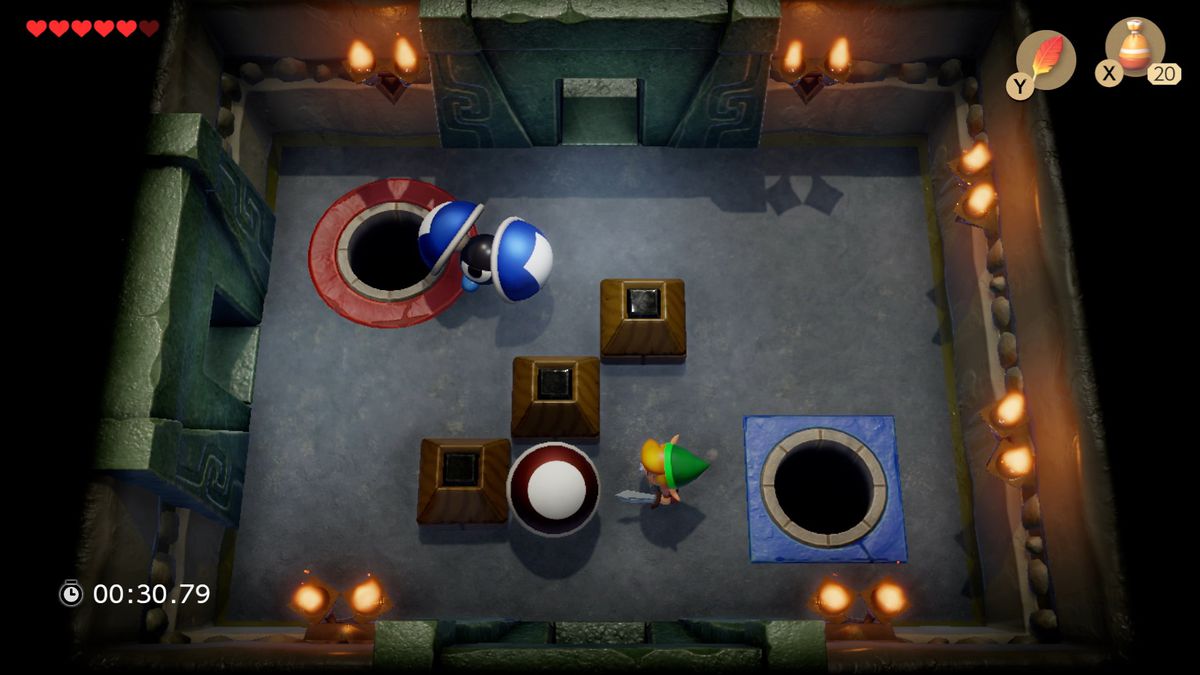 Later dungeons, notably the last two, do spike considerably in complexity, but most of Link’s Awakening feels like it was designed for youngsters. Which, again, isn’t a bad thing. And if you’re looking for a way to introduce Zelda to someone under the age of 10, it’s a great thing. But for adults, the game may feel a bit lacking compared to the complex adventures of Breath of the Wild and A Link Between Worlds.

The real highlights of Link’s Awakening happen out in the daylight. Side characters propel Link through his adventure, and the hilarious swapping quest (wherein Link marches around the world trading pineapples and hair bows for other random doodads) returns in fine fashion. One of my favorite moments, in which a goat lady from a nearby animal village catfishes a hermit by sending him a photo of Princess Peach, perfectly captures just how bizarre and referential this game can get. These characters bring the island to life and make Link’s Awakening one of the most memorable adventures in the Zelda canon.

Even though I found myself cruising through Link’s Awakening, I was constantly charmed by the fresh coat of paint on this remake. The original game’s 2D sprites have been replaced by 3D models that look like they were pulled straight from a toy box. Link himself is adorable, animated with little details like a midair foot shuffle as he preps a dash and a defensive hunker when he pulls up his shield. Enemies get the same treatment, and seeing familiar 2D sprites like those annoying electrical blobs recreated in this art style is always a delight. 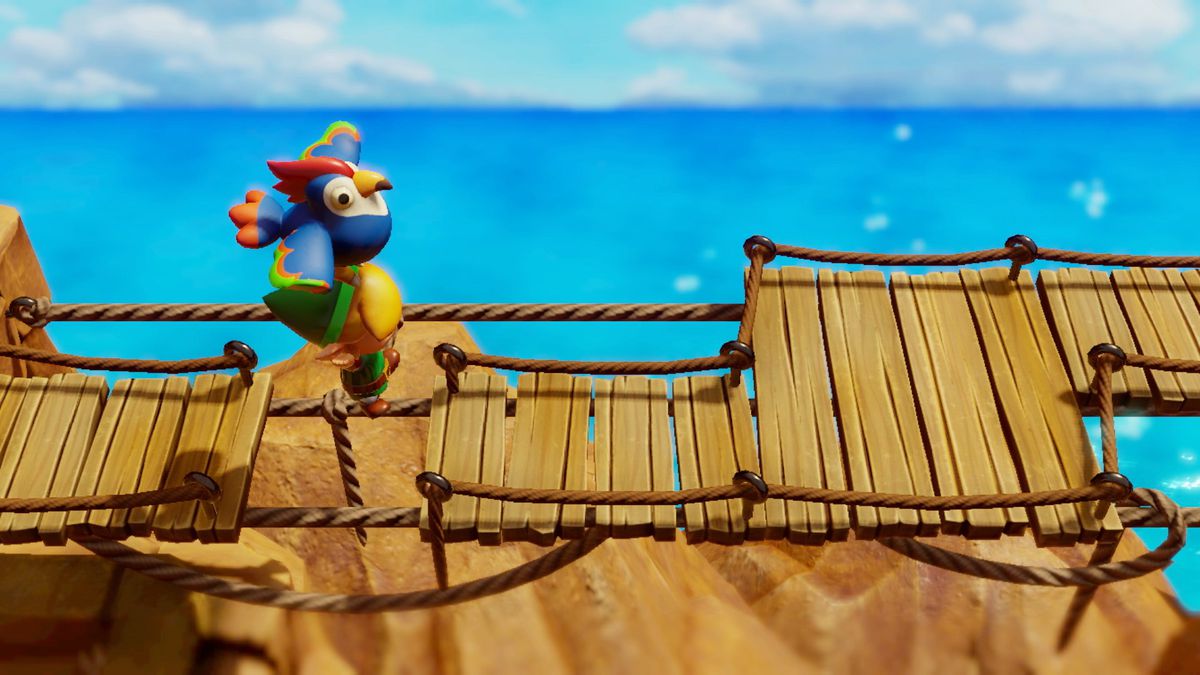 The graphical style does seem to employ some techniques that attempt to mimic tilt-shift photography, making everything look pint-sized with a narrow depth of field. This effect works well for the most part, but it can be inconsistent, appearing in some areas and not in others, which ruins some of the magic. When it does work, however, it makes it seem as if you’re looking down at a tiny, physical model of the island, and the effect adds an extra level of charm and whimsy.

But the game itself, sadly, does not run great. This is perhaps the most surprising aspect of Link’s Awakening, given that Nintendo tends to put a priority on performance for its core franchises. Super Mario Odyssey ran at a silky 60 frames per second, and while Breath of the Wild was limited to 30 fps, it always felt like a consistent, stable 30 … the Deku Shrine notwithstanding.

Link’s Awakening, meanwhile, seems far less visually ambitious than either of those two games, but stutters at nearly every transition as the game attempts to stream in the next area. For a game so focused on capturing scenes filled with joy and character, the performance issues frequently took me out of the illusion. They never made the game unplayable, but they definitely hindered the visual experience. 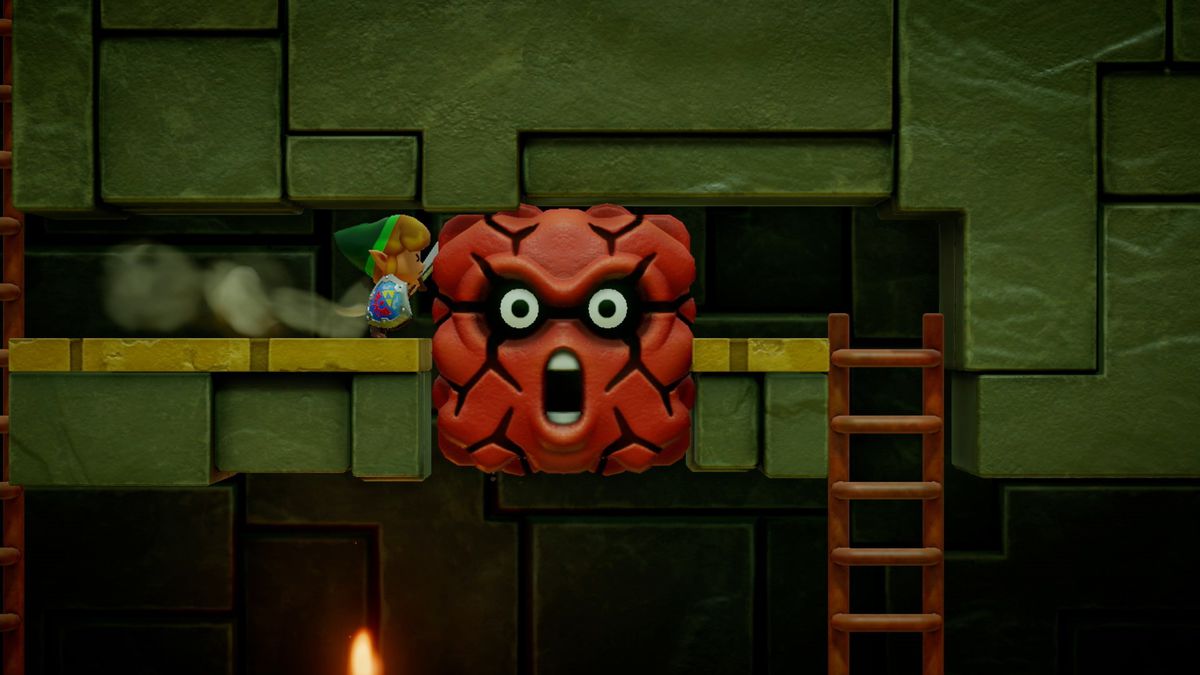 Aurally, though, Link’s Awakening is a delight. Classic themes from the original game have been recomposed with true affection, and the characters in the wide cast all offer various grunts and shouts of enthusiasm as you make their acquaintance. It’s definitely worth cranking the volume to appreciate how much care Nintendo pumped into the game’s audio.

Nintendo and Grezzo have made a handful of other changes from the original release, most of which further enhance the experience. The game’s overworld and dungeon maps can be marked up with icons, indicating chests and bomb-able walls worth returning to. New hidden seashells are available, offering collectors a bit more to chase than existed in the original game, and a new seashell sensor can help you find them all without having to Google for a guide.

Chamber Dungeons are the biggest gameplay additions to the remake. Completing the game’s various dungeons unlocks “parts” that can be slotted into a 2D map, allowing you to create a mishmash of rooms taken from all the dungeons in the game. 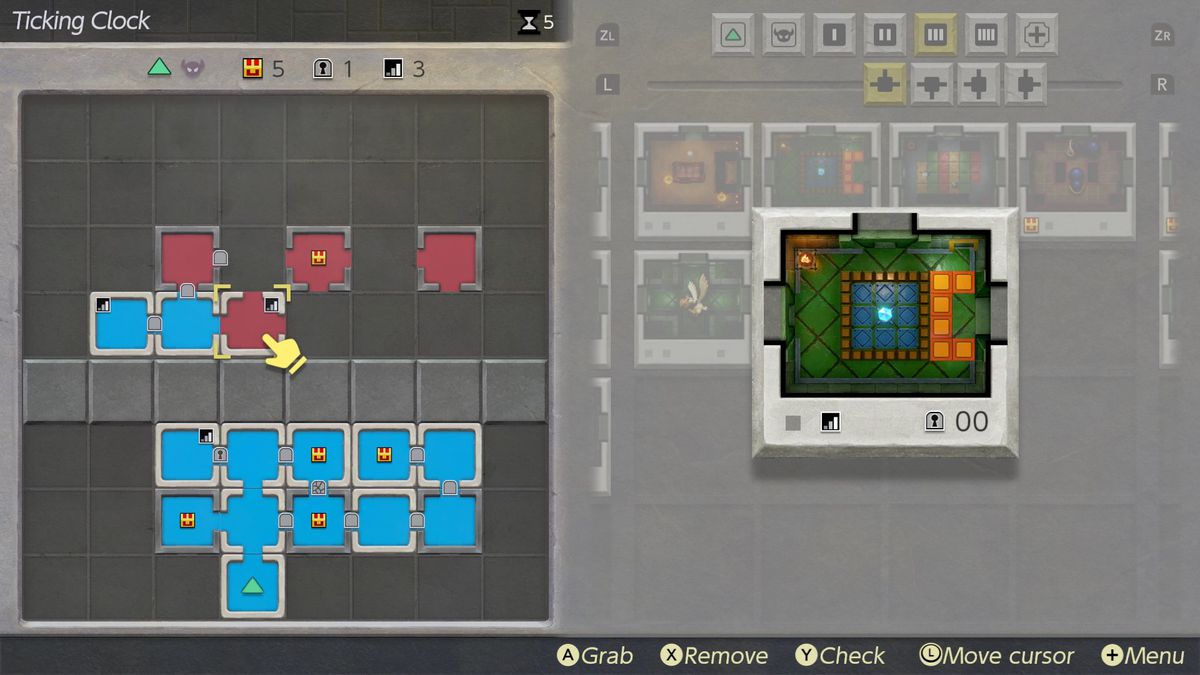 Chamber Dungeons are a neat idea with some frustrating limitations.
Nintendo EPD, Grezzo/Nintendo

The Chamber Dungeons aren’t a super thrilling way to spend your time, unfortunately. Because of the simplistic nature of the panels available, complex dungeon-building is impossible; most created dungeons will take just a few minutes to complete. Even if you were incredibly proud of your simple dungeon creation, sharing it with another player requires saving it to an amiibo and swapping the data, which seems like a lot of effort for very little gain.

The popularity and success of the Mario Maker games proves that there’s a demand for players to create their own fun, but the toolset in Link’s Awakening is far too limited to offer anything original or striking.

Link’s Awakening is a special adventure and a perfect introduction to even the youngest would-be Zelda fans, but it does fall short at times. The striking new presentation is stellar, even if the game can’t quite keep up with the splendor on the technical side. And the slight enhancements made to the original’s gameplay are mostly for good, even if the biggest new feature (Chamber Dungeons) doesn’t offer much.

If you can get over these issues, you’ll find a charming recreation of one of the most approachable Zelda adventures ever made.

The Legend of Zelda: Link’s Awakening will be released Sept. 20 on Nintendo Switch. The game was reviewed using a final “retail” download code provided by Nintendo. You can find additional information about Polygon’s ethics policy here.