Based on the setting of the next Ghost Recon alone, Ubisoft has learned some important lessons from the previous game in the franchise, Tom Clancy’s Ghost Recon Wildlands. Set on the fictional archipelago Auroa, the new game, Ghost Recon Breakpoint, sidesteps the critical and diplomatic concerns — namely of a U.S. Army Special Forces group infiltrating a foreign land portrayed as a cartel-controlled narco-state — of Wildlands’ Bolivia.

The island setting of Ghost Recon Breakpoint is instead home to Silicon Valley settlers. A drone tech company known as Skell Technology has set up its headquarters there. But Auroa and Skell have been invaded, and the tech workers there are being held hostage by a group of ex-Ghosts, rogue operatives named the Wolves. Led by Cole D. Walker (Jon Bernthal), the Wolves have cut off all communication to the outside world and assumed control of Skell’s drone fleet. They plan on doing bad things.

Ghost Recon Breakpoint will put increased emphasis on survival, pushing the Ghosts to their physical limits, Ghost Recon executive producer Nouredine Abboud said at a preview event for the game in New York last week. When the Ghosts infiltrate the island, their helicopter transport is taken down by swarms of flying drones. Players are without supplies, without intel, and lightly armed. Their military skills will be put to the test, said Eric Couzian, creative director on Breakpoint. Players will have to gather intel, commandeer weapons and transport, and survive in Auroa’s surprisingly varied climate, which includes snowy peaks, deserts, fjords, even a volcano.

And they’ll have to face a squad of equals in the Wolves, which have the same training the Ghosts do.

In Breakpoint, players will have to eat rations and stay hydrated to maintain their health and stamina. They’ll need to perform weapons maintenance to keep their guns working and accurate. They’ll need to treat injuries that will otherwise affect their performance. They’ll do so at new safe zones, bivouacs, scattered throughout the island. Resources can be scavenged from Auroa’s environment and crafted into items like bandages and rations, and players can trade them with others at bivouacs. 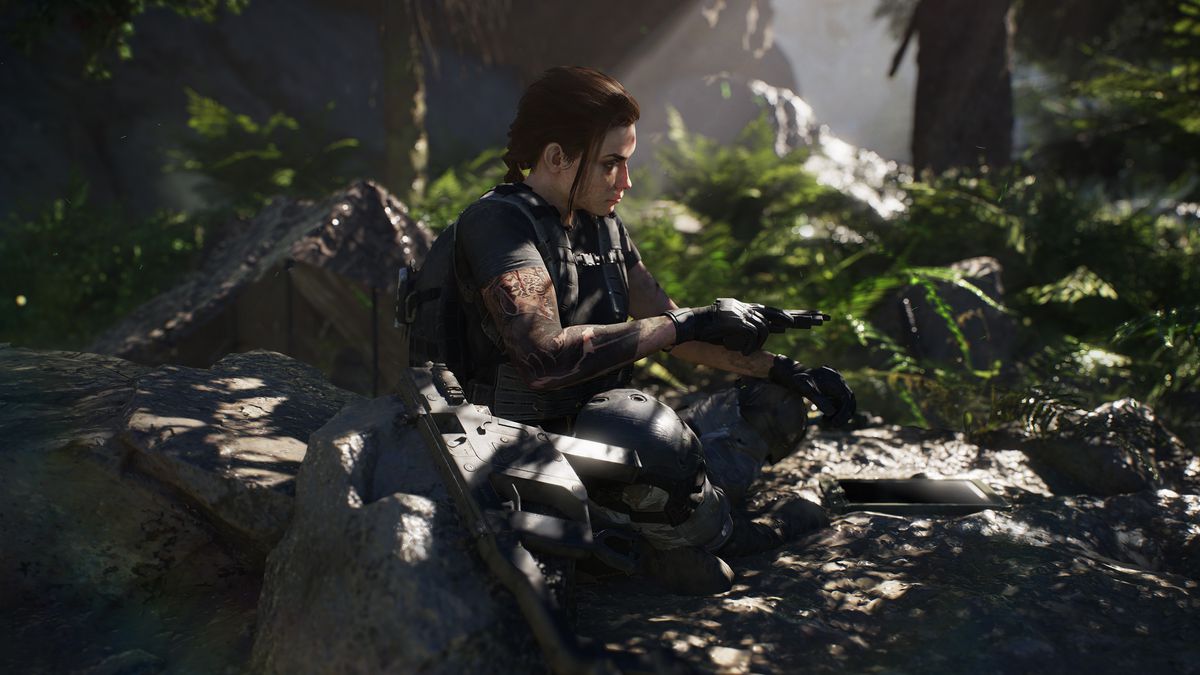 Fury rests at a bivouac.
Ubisoft

Players can also simply rest at these new safe zones and pass the time. Ubisoft is letting players choose the time of day and conditions under which they break camp to embark on missions. Doing so at nighttime will provide the cover of darkness. And if the weather turns bad, that can work to your advantage, decreasing the number of enemy Wolves out on patrol.

During its preview, Ubisoft often highlighted the changes in terrain in Ghost Recon Breakpoint. They showed Ghosts walking up and down steep slopes in hilly areas, terrain that will affect movement speed — and, it seems, might lead to injury if players aren’t careful in how they approach the islands’ treacherous terrain.

While the beginning moments of Ghost Recon Breakpoint make the game look like a solo survival adventure, like Wildlands, the game is meant to be played with a squad. Players can customize their own Ghost with the class of their choosing — Ubisoft highlighted the assault, sharpshooter, and stealth-focused “panther” classes during our demo — and load up with tools that will help with team tactics. Players can deploy a drone, for example, to get a bird’s eye look at the battlefield to identify hostile threats.

One important team tactic, Sync Shot, which lets teams coordinate their fire to instantly take down a group of bad guys, returns in Breakpoint from Wildlands. In our demo, Ubisoft showed the Ghost squad creep through the Skell compound and take out enemy groups of two to four with ease and simple coordination. 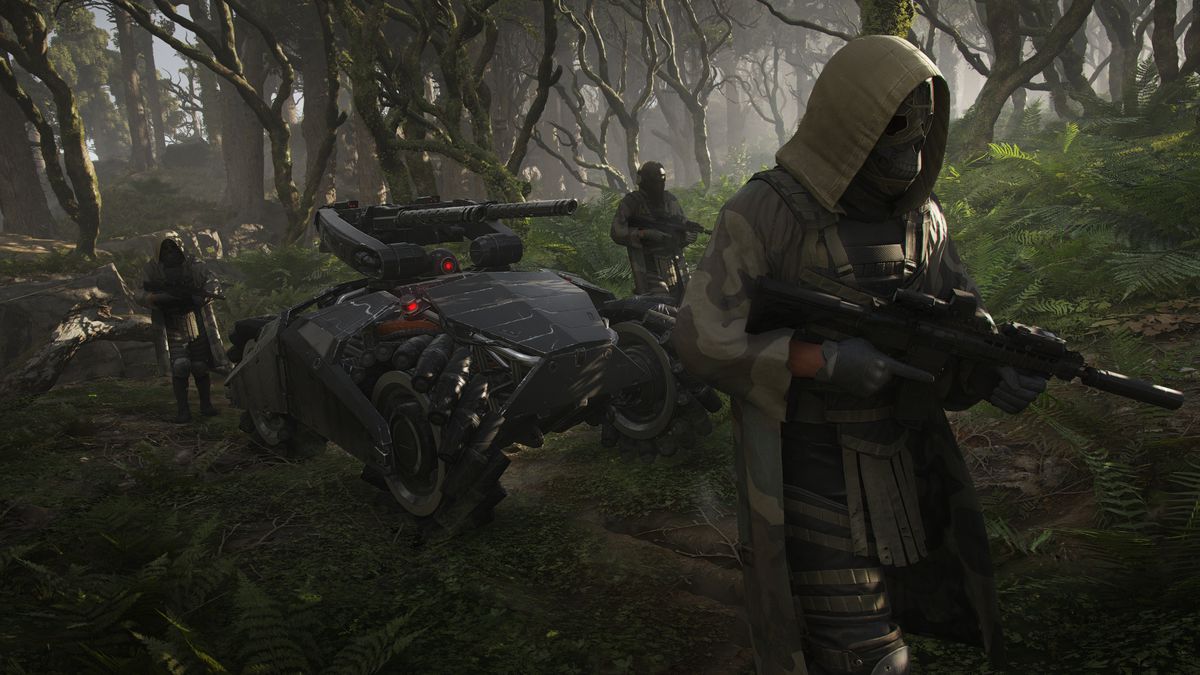 A pack of Wolves patrols with a Skell drone.
Ubisoft

Breakpoint will give players a few new tricks too, including prone camo, which lets you roll around in the mud or dirt to cover yourself and blend in with your surroundings, and a breach kit, to cut Ghost-size holes in fences.

When Ubisoft did its live play demo, the mission went smoothly. Four Ghosts, occasionally splitting into teams of two, advanced on a Skell drone factory in order to recover an engineer. They quietly crossed a river, picked off patrolling Wolves in packs, surveilled the compound for guards, and successfully sneaked in, bypassing patrolling drones, with ease. It was a stealthy affair, well practiced of course, that left behind quite a few Wolf corpses, but rarely raised an alarm. Later, when my team tried the same mission in a hands-on demo, we botched it, getting into quite a few firefights, including one against a compact car-sized drone. Still, it was all pretty thrilling stuff, full of tense, stealth-focused gameplay complemented by cool modern military tools.

Ubisoft teased a lot more to come, promising shared progression across solo, cooperative, and PvP — no matter which mode you’re playing, your loadouts and upgrades will carry over, developers said — and long term post-launch support for Ghost Recon Breakpoint. That post-launch content will include additional story content, special events, and endgame raids. Breakpoint’s raids were described as “very high level situations” that will be “co-op only and highly replayable.” A teaser showed what appeared to be four-player assaults on an oil rig, a chemical plant, and a … volcano.

“This is going to put our whole game system to the test and we hope it will excite people for years to come,” Ubisoft said.

An in addition to new features, Ubisoft said it developed Breakpoint based on feedback from the Wildlands community. The company promised player-requested features like more military vehicles, a greater emphasis on story, and more choice, including branching dialogue options.

Fans won’t have to wait too long to start their next mission. Ghost Recon Breakpoint will hit PlayStation 4, Windows PC, and Xbox One on Oct. 4. More information on the game is expected at E3 2019 in June.