The story behind Parvati, the internet’s favorite Outer Worlds companion

The Outer Worlds is a hit, mixing classic role-playing game design with a wild anti-capitalist storyline. But the biggest surprise of all might be the internet’s reaction to one of the game’s non-player characters. Her name is Parvati Holcomb, and it’s safe to say that she’s the biggest thing since Ikumi Nakamura, the game developer who narrowly beat out Keanu Reeves as the most genuine person at this year’s E3.

Obsidian Entertainment had a lot going for it heading into the release of The Outer Worlds (not to be confused with Outer Wilds, another of the year’s best video games). Their history of stellar RPGs, including Fallout: New Vegas and the Pillars of Eternity series, was just part of that. Both Bethesda and BioWare’s buzz dominance has been upset in the RPG space, especially following the release of Mass Effect: Andromeda and Fallout 76. It’s the perfect time to serve up a fresh new game to fans hungry for more traditional Fallout, Mass Effect, and Dragon Age titles.

To learn more about Parvati, we reached out to Obsidian. They put us in touch with narrative designer Kate Dollarhyde. Our interview has been lightly edited for clarity and brevity.

[Warning: The following does contain light spoilers for The Outer Worlds, and Parvati’s quest arc in particular.]

Polygon: What was so interesting to me is that the first person that we meet, and the very first party member that you actually get, is Parvati. Why was it so important to introduce Parvati so early in the game?

Kate Dollarhyde: Parvati is just kind of a unique case as a character. The other folks that the player ends up meeting are little more worldly. Parvati’s lived a very sheltered life. She’s quite naive. She hasn’t had a lot of contact with the outside world. All she’s known is this company town — the Spacer’s Choice town, Edgewater — and her very limited social circle, which is basically her boss, her father who has passed away, and then all the machines in Edgewater.

So, she gets to be the player’s voice of surprise and delight and horror at experiencing the rest of the colony with new, fresh eyes. It’s important for the player to meet her first so that she is someone that you can sort of set the stage for the breadth of the experience that the player can have. And she knows Edgewater best […] she’s the person best equipped to speak for the residents of Edgewater. 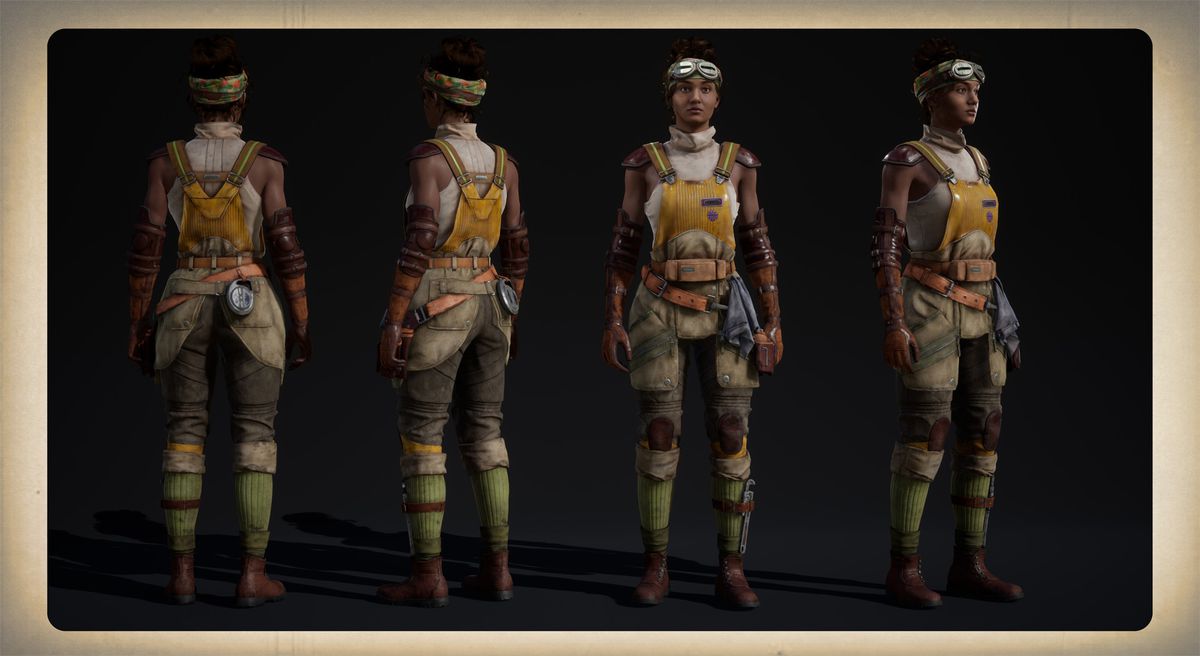 What were some of the inspirations for her character when she was being created?

It’s actually a little bit of a complicated story. Parvati was originally concepted by [writer] Chris L’Etoile. You might know his work from Mass Effect. She was originally concepted by him and then he did the first pass on her writing. He had to leave the company suddenly, so I took over for him. I believe some of his inspirations were Kaylee from Firefly. I think it’s pretty obvious that there’s a direct inspiration there.

He was looking for someone to be sort of the empathic moral center of the party. Someone who’s maybe like a little more naive, but very sweet and kind and is most interested in taking care of other people. It’s sort of the core of her character, and he really defined that. I just expanded on it.

I did get a very strong Kaylee vibe from the jump, but, you know, as we learn in the Firefly movie Kaylee isn’t always as naive as she portrays herself to be. There are elements of experience and elements of life that Kaylee isn’t up to speed on, but probably it’s not a one-to-one Kaylee here. There’s many other nuances to her character. And one of the things about her character that was so striking to the folks here at Polygon who encountered her for the first time was that she was asexual.

That was exciting. I felt really lucky to inherit her as a character. It was almost like kismet just, because … it’s really weird to out myself to all of video games, but I am an asexual woman. I’m also bi, so to inherit this character and be like, “Wow, I can speak directly to her experience.” It felt like a gift in a way, and I was really excited to sort of bring that personal experience to the audience.

In The Elder Scrolls 5: Skyrim, one of the first party members that you get is Lydia. She is, you know, there “to carry your burdens.” And that is absolutely not what Parvati is there for. She has her own and narrative arc. Could you take us through her personal journey in the game?

Parvati’s journey is really more of like a kid leaving the small town for the first time and going into the big city and discovering that there’s a wider world. For her, it’s really about broadening her horizons, not just in terms of general life experience, like seeing new places or meeting new and weird people, but also broadening her social horizons. This is the first time she’s had a quote-unquote “family” or a really tight knit social circle. Part of the growth she has in some of the barks [lines that Parvati’s character says during periods of idle gameplay or exploration], especially with the other companions, is just about her getting to know them and forming bonds and this is sort of the first time she’s had a chance to do that.

So, her journey across the game is really one of coming into her own and of self discovery. And that’s also in the romantic sense too. She hasn’t really had a lot romantic experience, and she doesn’t know how to handle these feelings, so the player can sort of walk her through this very difficult and frightening experience and make it sort of a safe and comfortable experience for her. Parvati can hold her own in combat as well. The Outer Worlds allows you to equip your party with weapons and armor, and control how they react in combat situations.
Obsidian Entertainment/Private Division

When I was talking with Tim Cain and Leonard Boyarsky, one of the first questions that I had to ask them was, “Will we be able to romance our NPCs in this game?” Mass Effect fans and anyone who’s played an RPG in the last 10 years wants to be able to know the answer to that question, so I felt compelled to ask it. But, you cannot romance your party members in The Outer Worlds. In fact, I don’t think there’s necessarily a narrative romantic option for the player character with anyone in the game.

But there is for Parvati. And so the player has to navigate these feelings, navigate these experiences with her and around her. How challenging was that as the narrative designer to write sensitively and effectively?

In a way it was very easy just because, if you’ve had friends who have been in romantic relationships, you have to give them advice from time to time. They might come to you for advice, and you will do your best to take care of them and do right by them and make sure they are happy and safe.

People generally like doing that. They like giving advice, they like facilitating good experiences for people they care about. I just sort of brought that perspective with me in writing the Parvati companion quest arc. Players like to do cool things for their companions and feel like they’re really invested in their lives. One of the things that I’ve personally really enjoyed in games similar to ours, like Mass Effect or Dragon Age, is when the companions develop friendships or relationships outside of the player’s personal sphere. When Tali and Garrus hook up or when Dorian and Iron Bull hook up, that really doesn’t have anything to do with the player. It’s just the characters themselves living their own lives, and so they feel like real people who live in the world.

It was hugely important and I honestly wish we could do more of it if we had more time. I’d write a million more words of unique people living their lives. Maybe in future projects I’ll get a chance to do that. But it’s not just representing a hopeful world, or a world that we want to see. It’s, from my point of view, representing the world as it currently is. There are women in positions of power. There are people of color doing all kinds of jobs. There are queer people in every corner and class of the world. And so I want the world of the future to reflect the world of the now. And that means reflecting our current reality.

What has been the feedback from the players?

Honestly, it’s been pretty wild. I can speak most easily to Parvati, because the outpouring of love and delight and identification with her has really shocked me and delighted me honestly. I was expecting […] people would like her because she’s very likable. She’s very sweet. Um, she always sort of wants what’s best for the player and the party. So, she’s easy to like in that regard.

But, I didn’t expect the amount of people who would very strongly identify with her and her story to be quite so large, and for them to personally reach out to me and tell me that [her story] had a very positive impact on them. It’s honestly been quite shocking and overwhelming and really gratifying.

Just seeing the larger response to the game has been an absolute delight. You know, one of the hardest things about game development is that you work in silence for so long and you don’t get really any feedback except from your peers. So, you don’t know what a larger player base will think of whatever you’re creating. And sometimes you create something that you’re super proud of and it doesn’t hit quite what you want and that doesn’t feel great. And then you can work on something with this great team and you’re like, “You know what? This could be really cool. I hope it finds an audience.”

And then it finds a humongous audience that listens. This is unimaginable for me. So, it’s been an absolutely wild ride and it’s only been three days.

The Outer Worlds is available now on PlayStation 4, Windows PC via the Epic Games Store, and Xbox One.