Every so often, a game comes into my life that makes me feel strange. I think this feeling might be … love. Total War: Three Kingdoms is one of those games. It manages to make me feel like a new man, specifically, a powerful Chinese warlord circa 200 AD.

I’m not being flippant. Three Kingdoms succeeds in taking the basic formula of historical-empire simulation and transforming it into something magical. This game feels less like a diverting intellectual challenge and more like a convincing role-playing fantasy. It has crossed a mystical border, from colorfully disguised statistical manipulations, into a towering human drama.

It all comes down to how the game presents a vast cast of characters, each of whom has their own agenda. Unlike many games of conquest and diplomacy, Three Kingdoms’ human-behavior AI has the measure of man.

Polygon Recommends is our way of endorsing our favorite games. When we award a game the Polygon Recommends badge, it’s because we believe the title is uniquely thought-provoking, entertaining, inventive or fun — and worth fitting into your schedule. If you want to see the very best of the best for your platform(s) of choice, check out Polygon Essentials.

When I do business with my rivals, they behave convincingly; sometimes honorable, sometimes venal, sometimes dishonestly, but rarely nonsensically. I feel like I’m negotiating with them, rather than the usual puppetry and mummery of diplomatic systems. Likewise, when I manage my underlings — generals, administrators, spies, family members — I feel like I’m getting to know real people in all their variety.

I’m about 60 hours in so far, and I’ve yet to see the facade crumble, yet to comprehend the whirring cogs behind those smiling faces. This is a clever piece of work. 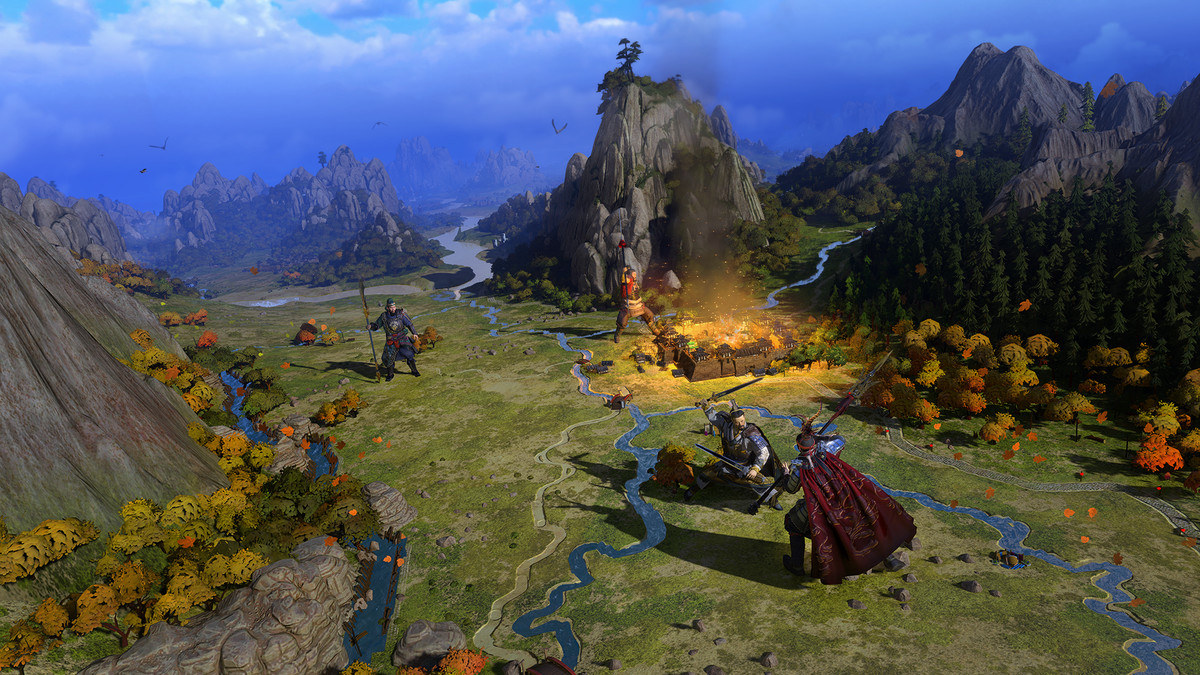 Before it came out, I thought I might admire Three Kingdoms, but drooling adoration is not the reaction I had anticipated. This game is the latest in a long line of interesting, flawed, occasionally dull historical simulations of superpower administration and warfare. While other Total War games have focused on the Romans or the Shogunate or Napoleon, Three Kingdoms takes us to China, at the end of the Han dynasty. An empire is fracturing. Its constituent parts are in a state of chaotic intra-fighting.

Like its predecessors, Three Kingdoms puts me in charge of a fiefdom, from which my grand aspirations take shape. I plot expansion and march my armies into neighboring domains. We engage in battle. If I win, my empire grows and my rival’s diminishes. I use my new possessions as taxation pools, which fund more armies. I take care to maintain a well-fed and well-behaved populace. I build buildings and I learn learnings, all of which yield me more money, more food, and better soldiers.

These are the basics of all Total War games. Their main attraction is an ever-improving and always impressive war engine, in which I manage a battle in real time, pointing my squadrons of horse, range, artillery, and infantry in the right direction, while hoping that my tactics are better than the enemy’s.

There’s always been something thrilling about these engagements and Three Kingdoms is no exception. I like to zoom high above the battlefield to take the broader view, and then zoom right into some copse, where a few hundred soldiers are fighting hand-to-hand at my direction. Battles are always mini-dramas in which I feel like I’m in control, even as the calculating numbers of hit points and buffs, crunch their way through flesh and bone.

Three Kingdom’s battle simulations are just fine. Their main diversion from previous games is that heroes and generals play a greater role in the combat. There are two modes of play (Romance and Records), one in which generals are godlike in their abilities, and the other in which they are merely overpowered fighters. This division is for those who want to feel a Romance of the Three Kingdoms legendary vibe, and those who want a more accurate historical experience. 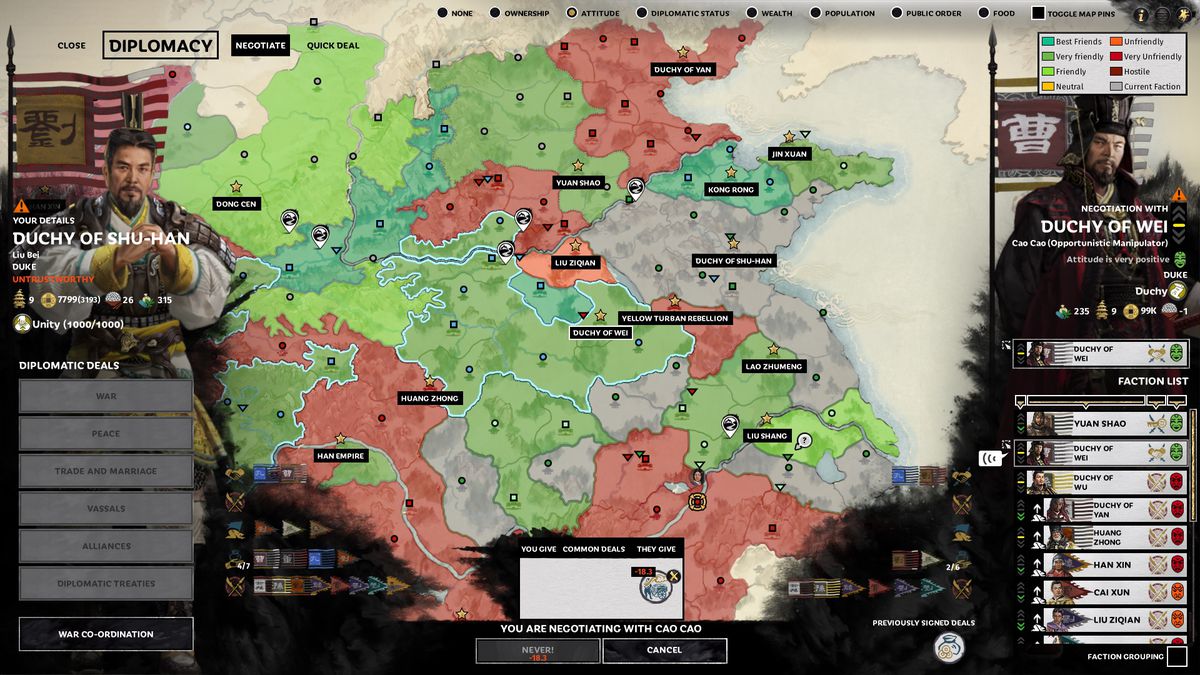 The real thrill, for me, is the game’s diplomacy section, in which I try to outwit my rivals by bluffing, bullying, coercion, and flattery. Depending on the state of my relationship with a rival, I can make various kinds of offers and deals to them. I can offer trade, marriages, and territory swaps. I can menace them for food and cash. Or I can charm or strong-arm them into joining me as an ally, vassal, or subject.

As you might expect, these transactions add toward a simple statistical calculation of how they view me. But it’s much more nuanced than that. They have their own agendas, which are constantly shifting according to the fates of war. One turn, my neighbor scoffs at me when I offer him my protection in exchange for his loyalty. Then, as he faces an onslaught from a rival superpower, he’s virtually begging to be my friend. This is a world of shifting alliances and treachery.

In the middle and late game, I find myself spending as much time tinkering with my diplomatic options as I do managing my armies. Part of the fun is that there are a ton of rivals to deal with, and they are constantly changing their allegiances. They think they can play me and, occasionally, they succeed.

Leaders die and are replaced by their offspring or their partners. Just keeping track of it all is a puzzle in its own right. I like people and I like pitching myself against them, I like the way we behave with one another and against one another. This game makes me believe I’m doing it for real.

I know it’s a sleight of hand, but it’s a good one. And, in the absence of AI stupidity, I’m happy to suspend my belief in the service of AI cleverness.

Managing my empire’s nobles is similarly invigorating, tasking me with taking care to keep my extended family in a state of reciprocal contentment. (It strikes me that this skill, rather than martial prowess, is the true mark of great leaders of the past.) Three Kingdoms makes people management feel like it’s a game in itself, rather than the clumsy chore it’s so often been in past games.

It’s worth noting that Three Kingdoms is a difficult, complicated, and often confusing game. There are far too many systems, options, and happenings going on for even the most sophisticated user interface. My first 10 hours were an exercise in bafflement. Even after my good, long playing session, there are still moments when I feel lost, when I am not at all sure what’s going on. But leaving the occasional UI flub aside, I find myself emerging into a state of comprehension, eventually.

I love the idea of placing myself into the distant past, of believing that I’m immersed in the problems and opportunities of ancient warlords. Three Kingdoms delivers, in the sense that it gives me the gift of a genuinely absorbing historical fantasy. It’s out now on Windows PC, Mac, and Linux.