Video Games Get Lapdancing Clubs So, So Wrong

What’s the lowest point in your life? For me, it has to be the time I wore marigolds and scooped regurgitated onions out of a urinal.

In my early 20s, I was the manager of a lap dancing club. I didn’t apply for the job, I just happened to be running a bar when the owner decided, “Fuck it, I’m turning it into a strip joint.” I helped him build the stages and erect the poles (ooh, er), and we tied some fancy scarves to the walls for some reason. The mood lighting was already there, but we gave the place a fresh coat of paint (yes, I helped with that as well, the owner was well tight), and we hung some curtains upstairs to create an area for private dances.

One minute I was running a dead bar and in charge of two bar staff, and the next I was responsible for five bouncers, six bar staff, and more than a dozen dancers. It quickly became apparent that these spaces aren’t at all like they’re portrayed in the media. 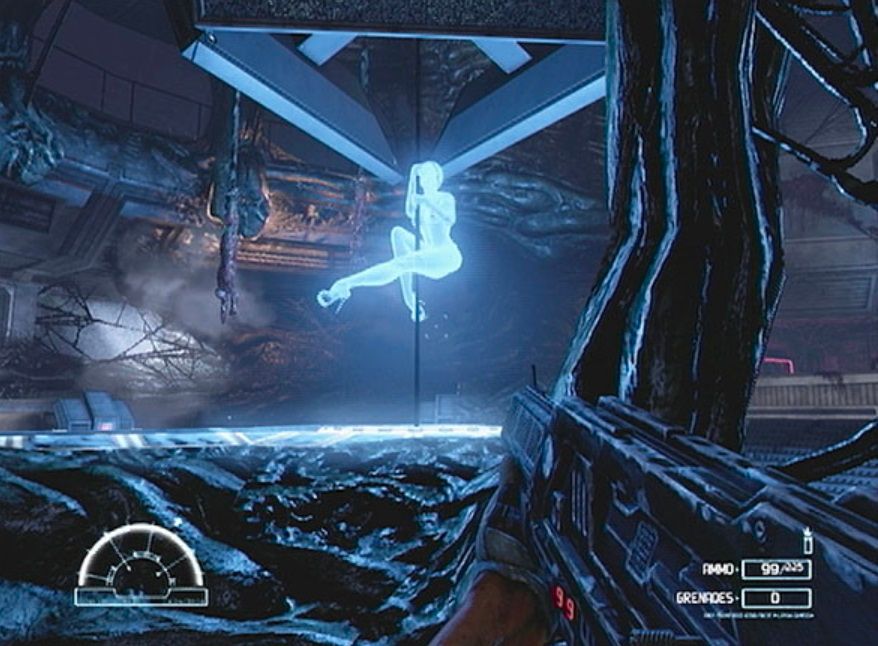 Video games often have lap dancing clubs in them. In fact, a lot of them just have normal clubs with pole dancers working in those, which isn’t really a thing, is it? Whether you’re strolling through Mass Effect’s Omega or exploring the streets of Los Santos, gyrating women are never too far behind. Game developers plonk them into environments like they’re placing trees in a virtual forest. Hell, there’s even an Alien game with a holographic pole dancer in it (see above).

It’s become a cliche to see virtual women locked in a suggestive animation loop, dancing with the enthusiasm of a retail worker forced to work on Christmas Eve. I don’t think I’ve ever seen any game even try to replicate the art of pole dancing done by a professional – it’s a proper skill that people train for years to master. It takes strength and grace, and it’s not just strippers who do it. You only ever see pole dancing in games for juvenile reasons, and it’s embarrassing in a medium that’s done so much growing up in the past few years. Why is there always an Asari slut dropping on the tables in every Mass Effect bar? What does it add to the scene? You usually can’t even talk to these virtual dancers – they’re reduced to decorations. It feels like a missed opportunity because you could actually tell a good story in that environment and dig down into the scene, uncovering compelling characters.

In my limited experience, dancers all do the job for different reasons. Obviously, money is a big one, since you can be better off working in a club than you would in a shop while you put yourself through university. But then you also have the older dancers and the house mums, who have been in the business for over a decade. Sometimes it’s just the money again, and sometimes they’re trapped in a reinforcement loop of wanting compliments to balance out all the harsh things customers have said to them over the years. I know, I have friends in the industry. It can become like a drug. But there are people with degrees and careers in other industries working under an alias in the clubs when night falls, there are people who are just doing it to climb out of debt, and there are people who enjoy it. But the common thing that binds them all together is the most obvious: they’re people. So why do games always treat them as scenery? 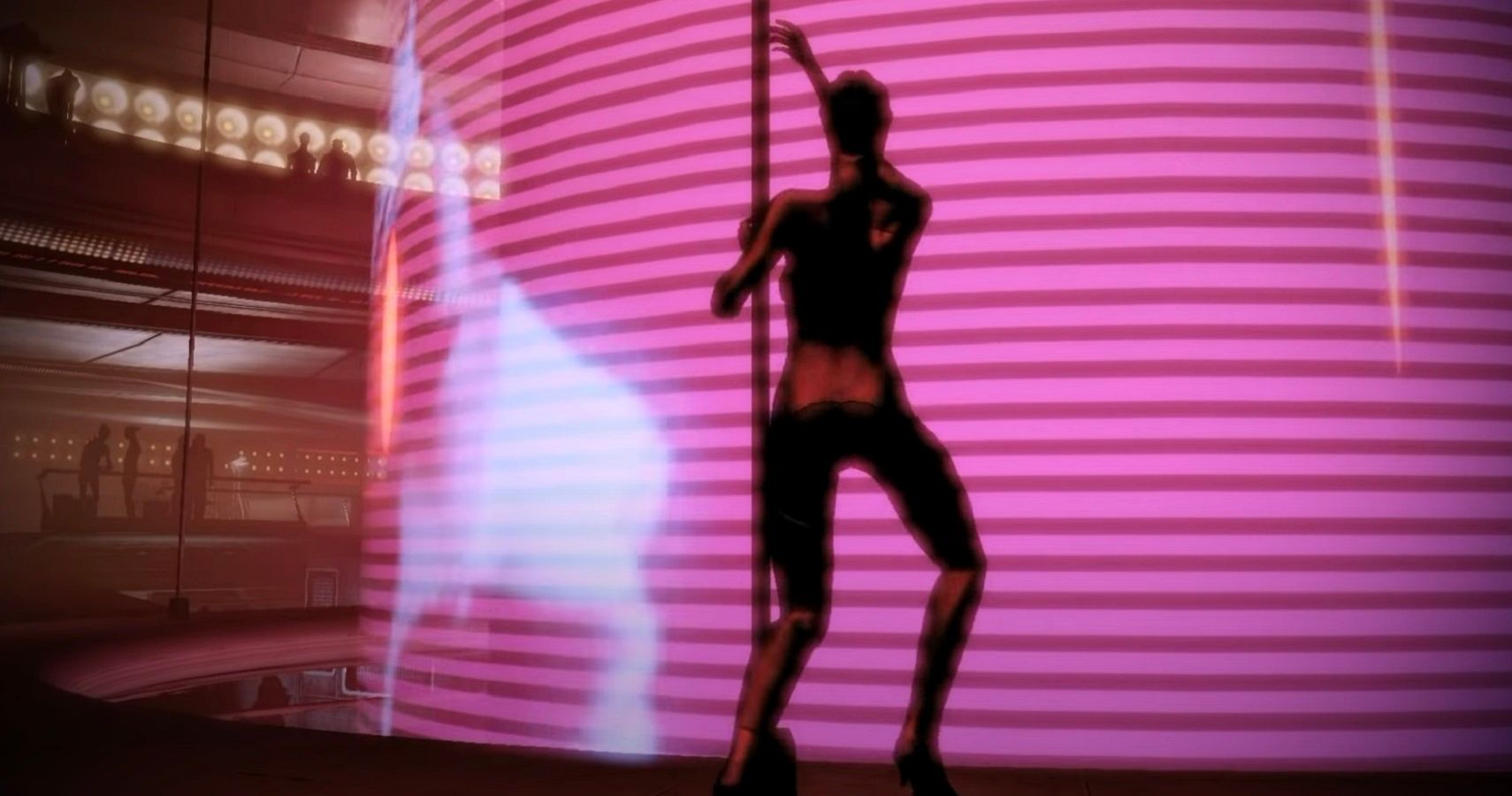 That same line of thought extends to the customers, who range from bizarre and surprisingly normal, but you still try to avoid even the normal ones when you bump into them in a supermarket outside of work.

Here are some customer archetypes:

Do You Know Who I Am Man – this guy owns a nearby club and he will keep reminding you of that. He comes in with his boys, who all look like that meme photo of the lads wearing clothes that are way too tight for them. They’ve all been on the gear – you can tell from their muscles and the fact they occasionally headbutt a guy for accidentally looking in their direction. They’re basically violent human Funko Pops.

Footballer Who Says Loose Change Ruins His Jeans – we used to have a football player come in every now and then, and he’d tip you the change from every order because coins ruined his pockets. He was alright, to be honest.

Guys Who Occasionally Crap Themselves – I once went into the toilets and there was a distinct smell of shit. Upon further inspection, it turned out someone had shat their pants and stuffed their boxers down the side of the loo. Once I’d binned them, I checked the cameras in my office. We had 27 camera feeds in that bar, and it only had a capacity of 100 people. We even had cameras in the toilets looking at the sinks so we could catch people blasting gak up their noses. One guy went into the cubicle and stayed in there a suspicious amount of time. When he came out, he was walking like he’d lost his donkey. I asked one of my bouncers to ask him to leave. When he protested and asked why, my man said, in a thick Irish accent, “Because you fucking shit yourself, mate.” All the shit guy’s friends laughed, and shit guy stood up, revealing a brown ring on the stool where he was sitting. He left the club with his head down, his ass shitty, and to the jeers of half the club.

Dude Who Pisses Up The Toilet Walls – I was in my office one night and happened to look at the camera feed. There was a guy in the upstairs toilets, standing directly in the middle of the room and spinning around with his knob in his hand, pissing all over the walls. I took him a mop and bucket and made him clean it up.

Nipple Guy – There was one guy who used to wait until nobody else was in the toilets and he’d pull his top up and tweak his own nipples in the mirror. I don’t know why.

Extremely Creepy Old Dudes – some of the punters would fall in love with the dancers, to the point where we had to stop them from coming anywhere near. They were usually older men with weird fixations on the younger dancers. Dealing with it on a nightly basis feels like stepping on a slug barefoot.

VIP Room Fella – our VIP room was super shit. Unbelievably dire. People still paid for it. Here’s how the whole system worked: you can have a dance for £10, which lasts three minutes. Some dancers would offer a £20 that’s “extra special”, which was exactly the same but it cost you double. We also had a VIP area, where you pay £100 for half an hour in a dancer’s company, and we throw a cheap bottle of champagne in to sweeten the deal. During that time, you can have as many dances as you want, but you have to leave the VIP room and go to the designated dancing area. Most people did not have a dance. One of the women who worked there, Sky, used to have a regular who would often pay for an hour of her time. They’d go to the VIP room and she’d go to sleep for an hour against his shoulder. Some people have too much money. 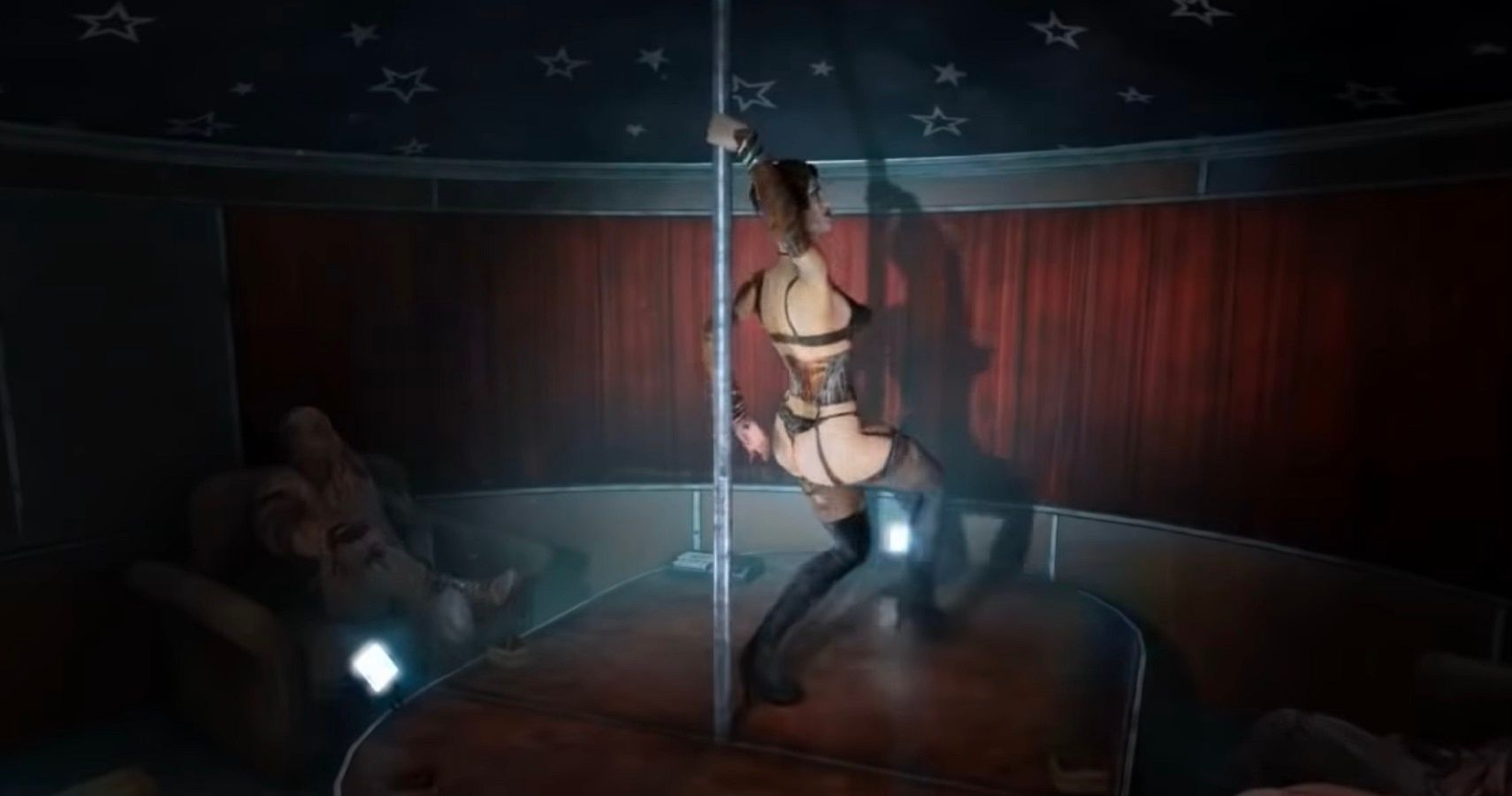 Then there were the characters on the outside of the club, who were all awful. One of the worst things about the club was its location – we were in an alleyway next to a kebab shop, which means we got all the closing time zombies covered in donner meat hanging around outside the front. They’d often sit in the fire escape opposite, which belonged to a Walkabout bar. Sometimes a bouncer from Walkabout would eject someone from that door and they’d end up sending whoever was unfortunate enough to be sat eating pizza there careening across the street. We’d often end up having to deal with everyone’s rejects.

One time, a guy assaulted his girlfriend outside the front of the club, and we gave her sanctuary inside. I was standing there with the five doormen in front of the entrance, and he walked along us like a drill sergeant inspecting his troops. When he got to me, a slim 20-odd-year-old, he stopped. He did a flinching movement like he was going to swing for me, so I grabbed his arms. We’d already called the cops on the radio, and one was parked up to our right, but he was fiddling about in the boot of his vehicle. When I looked over, I saw the guy’s friend sprinting at us, and I swung the other lad’s drunk ass around to put him between me and the guy, who was acting like one of those bosses you get in video games where you just have to make them run into walls repeatedly. He did a half-arsed flying kick and booted his friend in the spine, knocking him free from my hands. At that point, it became clear what the cop was doing – he was getting his dog out. I’ve never heard someone scream like someone screams when a dog has you by the bumhole. Don’t hit women, kids.

These are just some of the stories I dare put in print. There’s a lot going on behind the doors of these kinds of establishments, but developers just seem to include them in their games for titillation. Rockstar Games is an amazing studio, and it’s done some stellar work in representing the glitz and glamour of the nightclub scene in GTA Online. But GTA’s lap dancing club is a surface-level recreation and an excuse for the player to ogle at virtual tits. I’m not saying games need to simulate every aspect of life and implement a minigame where you pick up a pair of shitty underpants or scoop out undigested food from a piss trough, but it’s a shame that strip clubs have become this shallow, recurring motif. There’s a lot of interesting things you could say about them, or about the sex industry as a whole, and there are so many interesting people with surprising stories to tell hiding behind their blacked-out windows. It’s a shame that video games are happy to slowly gyrate around a pole with a bored look on their face instead.