Warriors Orochi 4 Ultimate Review: Lu Bu’s Back, And He’s A Demon This Time

What’s there to know about Omega Force’s Warriors franchise that you don’t already? At this point, the formula is pretty well-established, and you probably know whether or not it’s for you. So, instead of trying to convince any newcomers of the merits of this cult hit franchise, I want to answer a simple question: how does Warriors Orochi 4 Ultimate stack up for franchise fans?

The Warriors franchise has been in a pretty questionable state for a few years. Dynasty Warriors 9 was an unmitigated disaster, Warriors All-Stars was a tepid delivery of a great concept, and the latest spin-offs have been pretty lackluster – excluding the solid Dynasty Warriors Godseekers. Warriors Orochi 4, then, has a lot to prove. It not only has to carry on the Orochi name, but it has to carry the burden of the franchise’s mistakes with it and correct course. 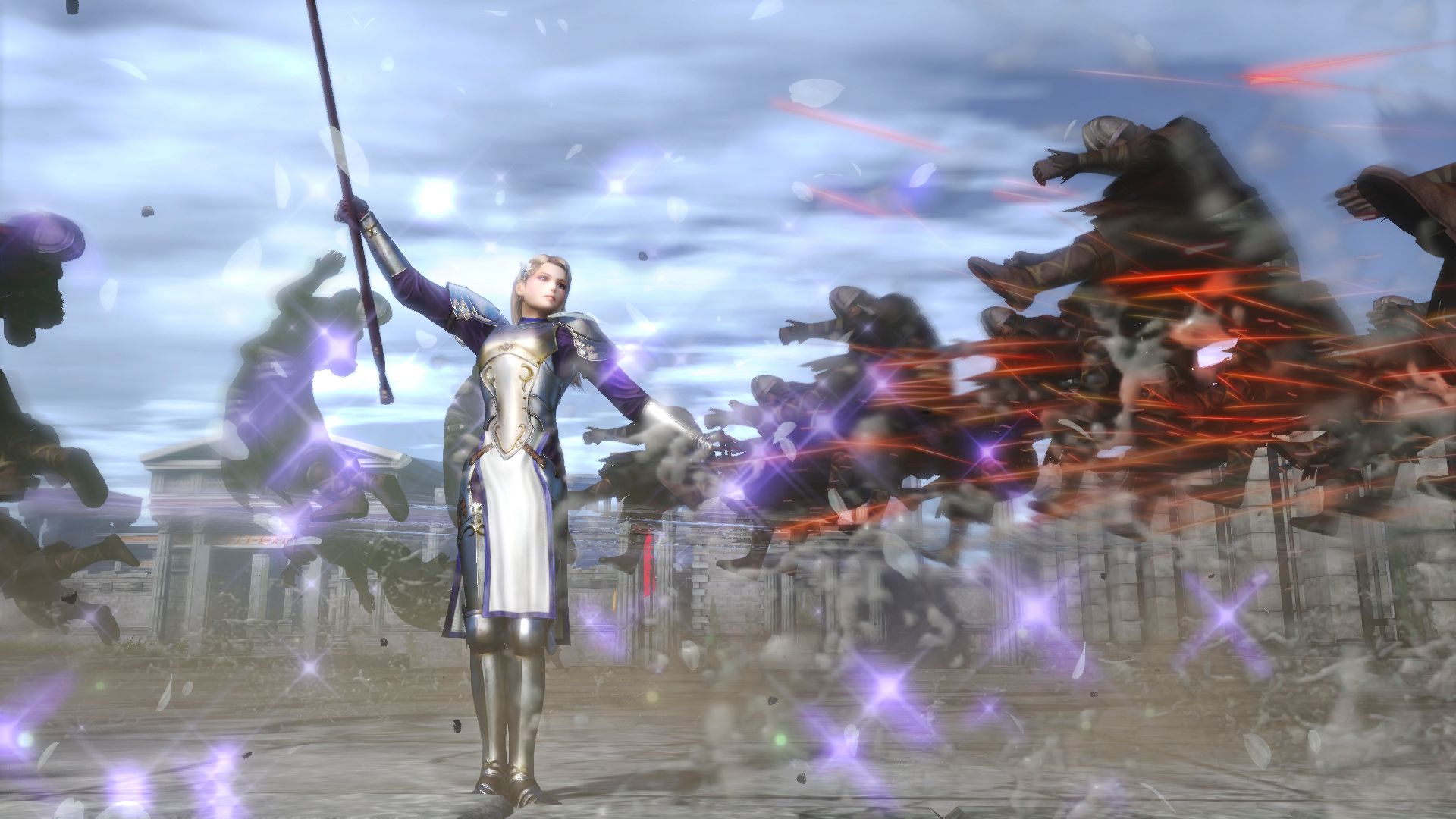 Orochi 4’s story isn’t necessarily the selling point of this thing. There are some stylish cutscenes and fun bits of dialogue, but they’re mostly there to show off characters chatting with each other who ordinarily wouldn’t. It’s a bunch of goofy fan service, and if you’re in the market for that, it’s pretty solid. There are even Fire Emblem adjacent support conversations between each of the 191 (!) playable characters.

The pretense of bringing together all these characters, which include Ninja Gaiden’s Ryu and Bladestorm‘s Joan of Arc in the Ultimate release, is pretty goofy – but that’s fine. It’s a silly bit of fluff that exists to bring all of these different characters together, and really, that’s all it needs to be. 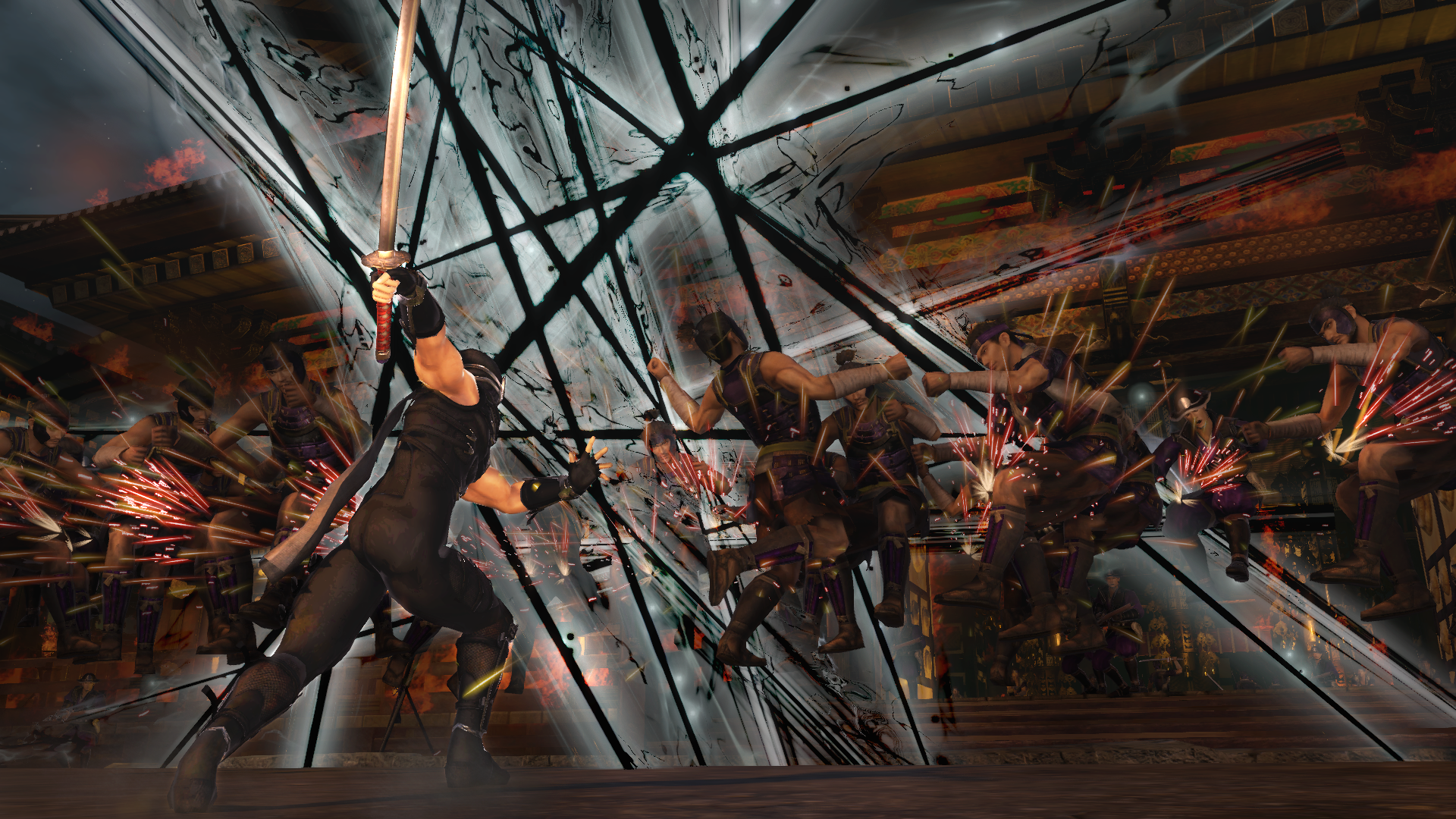 The Warriors franchise is, in a way, a benchmark for each console generation. Every time a new console is revealed, a certain kind of gamer asks themselves, “Huh, wonder how many dudes they can put on the screen in the next Dynasty Warriors?” Now that we’re nearing the end of the console generation, the answer to that question is, “a whole effing lot.”

Orochi 4 is probably the most densely populated entry in this series. During the most hectic moments, one swing of your weapon can easily hit dozens of foes at once. You can wrack up combos in the thousands in ten to twenty seconds with just a few button presses – and that’s just with the basic attacks. There’s magic that corrals dozens of dudes into a levitating Katamari ball, giant swirling laser tornados that yeet bad guys to the shadow realm, and joint attacks that are basically magical nukes. With these stacking on top of the usual hack n’ slash mayhem and the signature Musou attacks, plus a rage meter, Orochi 4 gives you heaps upon heaps of options when it comes to slicing and dicing tens of thousands of hapless goons.

There’s also a degree of strategy with some extra loot mechanics thrown in. Characters have different attributes that can stack with each other to make special team combinations, and each completed level yields a small cache of weapons. You’ll have your hands full juggling the fairly robust weapon crafting mechanics, although at the end of the day, it often doesn’t wind up affecting gameplay all that much – at least for casual players.

What’s In An “Ultimate”? 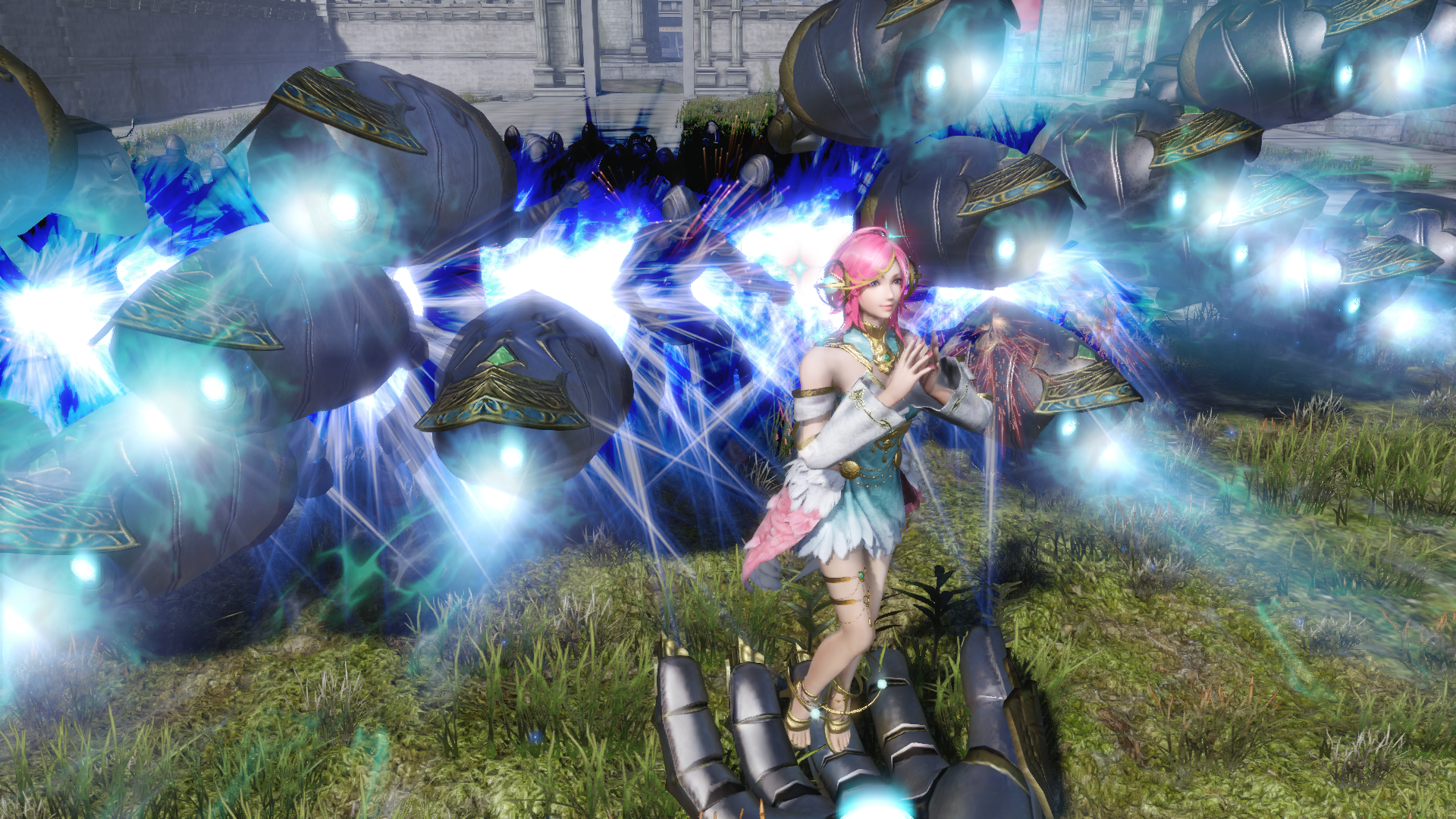 It’s worth noting that this is the second release of Warriors Orochi 4, as is the norm with this franchise. The question, then, is if Ultimate merits its price tag, or is just a fancy DLC. After all, you can just buy the upgrades as an add-on for the base game.

For my money, the changes made here are pretty substantial. There’s a whole stash of new story levels, all of which add in further context for the (still goofy) narrative. That’s not to mention the wealth of little tweaks, from the return of Warriors Orochi 3 Ultimate’s Reincarnation system to a new character selection menu that makes navigating the menus easier.

But the biggest draw, to me, is the addition of Infinity Mode. Players are tasked with scaling a Greek tower themed around the twelve zodiac signs, facing stronger and stronger foes with each level. This is an entirely new diversion made specifically for grinding out weapon materials and other items, and one which streamlines the looting and crafting loot. You can even unlock characters by playing, so it’s worth digging into to beef up your roster early on.

As far as Omega Force’s usual “Ultimate” or “Xtreme Legends” releases go, there’s no denying that Warriors Orochi 4 doesn’t necessarily overhaul as much as it could. That said, I think that speaks to the quality of the base game, which is such a content-rich and satisfying experience as is.

Last Of An Ancient Breed 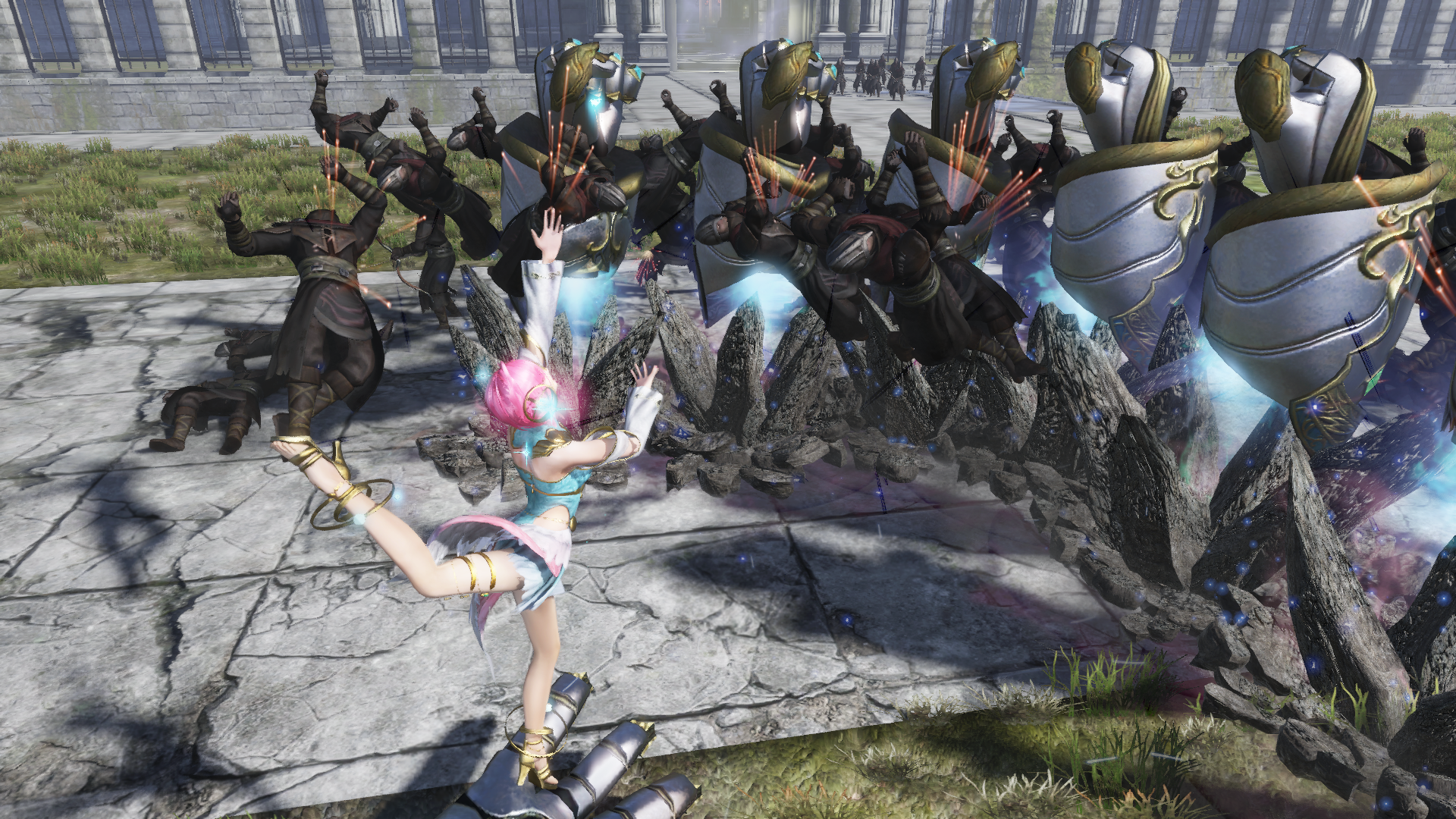 The Warriors franchise is comforting. As generations change, as trends shift, as big-budget games continue to feel more and more focus-tested, Omega Force keeps iterating on what people come to the series for. Each new game is just an iteration on and a tweaking of a formula they stumbled upon the early aughts, and the result is games like Warriors Orochi 4 feeling like a well-oiled machine.

Despite my own disappointment with the last few installments of this series, Warriors Orochi 4 reminds me why I fell in love with it all those years ago with Dynasty Warriors Gundam. It’s tight, polished, chockful of content, and an almost constant dopamine rush. Warriors Orochi 4 Ultimate, by consequence, is the most refined version of the game you can get, with a healthy infusion of content that gives early adopters new stuff to sink their teeth into and newcomers even more to grapple with. Whether you’re a lapsed fan, longtime stalwart, or even a newcomer, you could do a lot worse than this one. That said, if you don’t like this sort of thing, well… this definitely won’t change your mind, nor is it meant to.