Zoom In: How The Tactical Nuke Changed Call Of Duty

“Tactical nuke, incoming!” was either the sound of sweet victory or bitter defeat. Either way, if you played Call of Duty: Modern Warfare 2 back in its heyday, I’m sure you actually heard that line as you read it – followed quickly by that skull-splitting siren. Modern Warfare 2 was the absolute pinnacle of Call of Duty. It was the perfect arcade shooter because it was easy to pick up, it took seconds to get into a game, and the killstreaks were incredible. These killstreaks changed the landscape of Call of Duty for years to come, and no killstreak did that more than the Tactical Nuke. For a solid year, YouTube boomed with guides on how to get Nukes and montages of people detonating them. Future killstreaks were constantly in the shadow of the Nuke’s mushroom cloud.

The Tactical Nuke was the big daddy of all killstreaks and everyone wanted one. Calling one in assigned you with a badge of honour that allowed bragging rights in the school playground because it was no easy feat – you needed to get 25 kills without dying. On top of that almost inhuman achievement, what made the Nuke so special, so much more desirable than other killstreaks, was the fact that it ended the game and automatically won it for the side of the player who called it in. Getting crushed in Domination? A Nuke will fix that. Losing squadmates left and right in Team Deathmatch? Go solo and get a Nuke to win. Can’t keep up in Capture The Flag? Look, you get the point. Getting a Nuke was the equivalent of sticking a big middle finger to the opposing team and saying “Sod your strategy and teamwork, we’re winning now.” The enemy team would definitely shout a lot worse at you when you called one in.

The Nuke was a bone of contention at the time. Some people loved it, perceiving it as the ultimate marker of player skill. Others thought it was absolute bullshit and ruined the balance of the game completely. It was quite an arrogant killstreak to use, as it basically declared you the sole victor of the game. What’s worse is that it kills everyone in the game, friend or foe. This, combined with the fact it often cut games short meant that you could earn the ire of your teammates for calling one in, especially if your team was winning and everyone was having fun racking up the kills. No one likes having their fun stopped, so prematurely ending a game while also hurting your teammates’ K/D ratio wasn’t a great way to win friends. But who cares about friends when you’ve just singlehandedly won the whole game?

The implementation of killstreaks in Modern Warfare 2 marked a shift away from the more grounded gameplay of the previous CoD entries. Before, killstreaks followed a 3-5-7 pattern. You got a UAV at three kills, then an airstrike/artillery barrage at five kills, and finally an attack helicopter or vicious attack dogs at seven kills. MW2 expanded upon this formula greatly, adding a customisable roster of killstreaks that went all the way from three kills to 25. Everyone had their favourite trio. For me, that was the Predator Missile, Harrier Jets, and Chopper Gunner. You could support your team with UAVs, Emergency Airdrops, and EMPs that would disable enemy radar and electronics; you could also become a killing machine with the Pavelow and AC130. You could even mix and match. However you wanted to play, there were killstreaks for you. 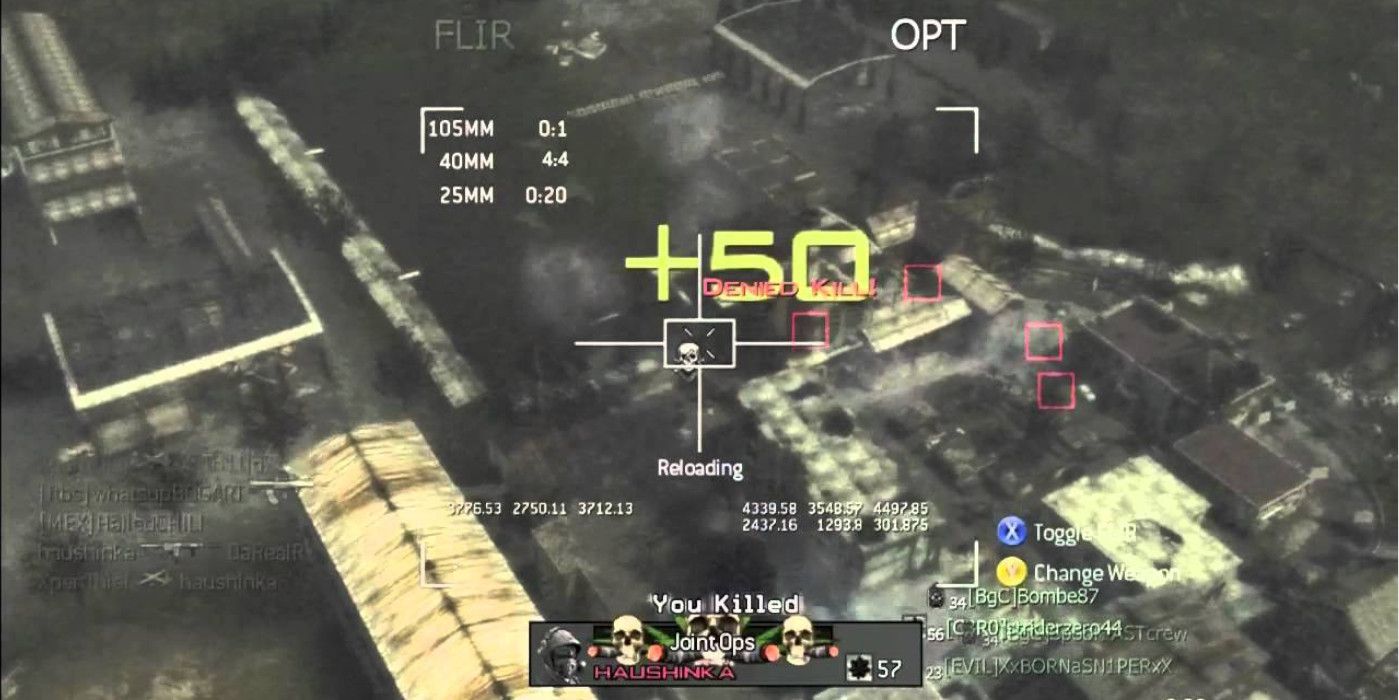 Killstreaks were fun because they felt impactful and had some weight to them. If you were on the ground when the enemy had air support up, you knew to run to cover or risk getting killed over and over, ruining your own killstreak. Your screen would shake as explosive rounds hit the ground around you. The frantic dash to any interior when you heard a predator missile launch set my heart racing. The killstreaks meant that if you put some time and effort in – or got lucky and got a good killstreak in a Care Package – you could top the scoreboards. On the other end of the spectrum though, if you were on a team that was constantly under siege from enemy killstreaks, MW2 was the most frustrating game in the world. The Nuke transcended the other killstreaks though. It became a thing of legend. Rumours spread that you could get them in Care Packages and Emergency Airdrops, so for a while everyone who couldn’t get a Nuke the hard way was spamming the support killstreaks, but to no avail.

After MW2, the big question on everyone’s mind was “Will there be a Nuke?” – future games missed the mark with killstreaks somewhat. Firstly, Black Ops changed the formula big time. Kills from killstreaks no longer counted towards your future killstreaks. This meant that it was a lot harder to chain big killstreaks together, which made getting the biggest ones much rarer. This was probably done to avoid the ostentatious amount present in every MW2 lobby. Also, no Nuke at all – sad. Modern Warfare 3 then changed things up even more. Gone were killstreaks, now we had strike chains and point streaks. These were cool, but they lacked the simplicity of MW2’s sleek killstreak system. What MW3 did have, however, was the M.O.A.B., the Mother Of All Bombs. This was a hidden killstreak similar to the Nuke. It was attainable after 25 kills done by the player – killstreak kills still didn’t count – and killed every enemy, caused an EMP effect on the enemy team for one minute, and gave the player who called it in double XP until the end of the match. They certainly gave your team the upper hand, but they didn’t end the game, so they felt flatter than the world ending Nukes. 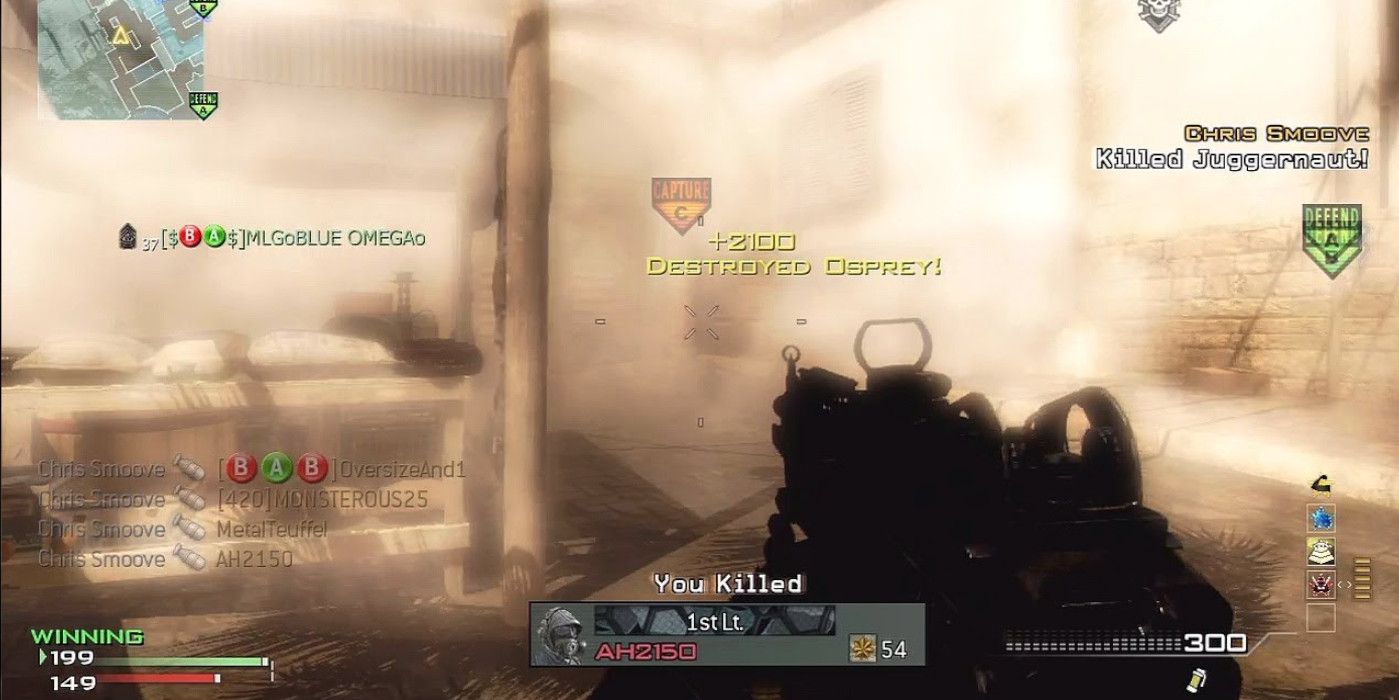 What made Nukes something special was the community that built around them. The general strategy was to have a silenced weapon and the Scavenger perk so you could silently rack up kills until you got a Harrier. Then you just had to let it get you to either an AC130 or Chopper Gunner and from there you were almost guaranteed the Nuke. There were also loads of challenges people did to try and get a Nuke. Some people tried to do it without killstreaks and some went knife only. The latter drew many accusations of cheating – watch for yourself and decide. But basically, if you could get a kill with it, people would try to get the Nuke with it.

I don’t think anything changed Call of Duty more than the Nuke did. It shaped excitement over future killstreaks for years to come and spawned dozens of YouTube careers. Getting one required a hefty dose of both luck and skill, but no one would ever admit to the former. The Nuke was MW2 at its most chaotic and over-the-top, and nothing has quite come close to it since.