AMD on Monday released its long-awaited Navi GPUs, which it claims are the best 1440p GPUs in their class—and the most affordable, too.

Both GPUs are expected to go on sale, along with AMD’s new Ryzen 3000 chips, on July 7. 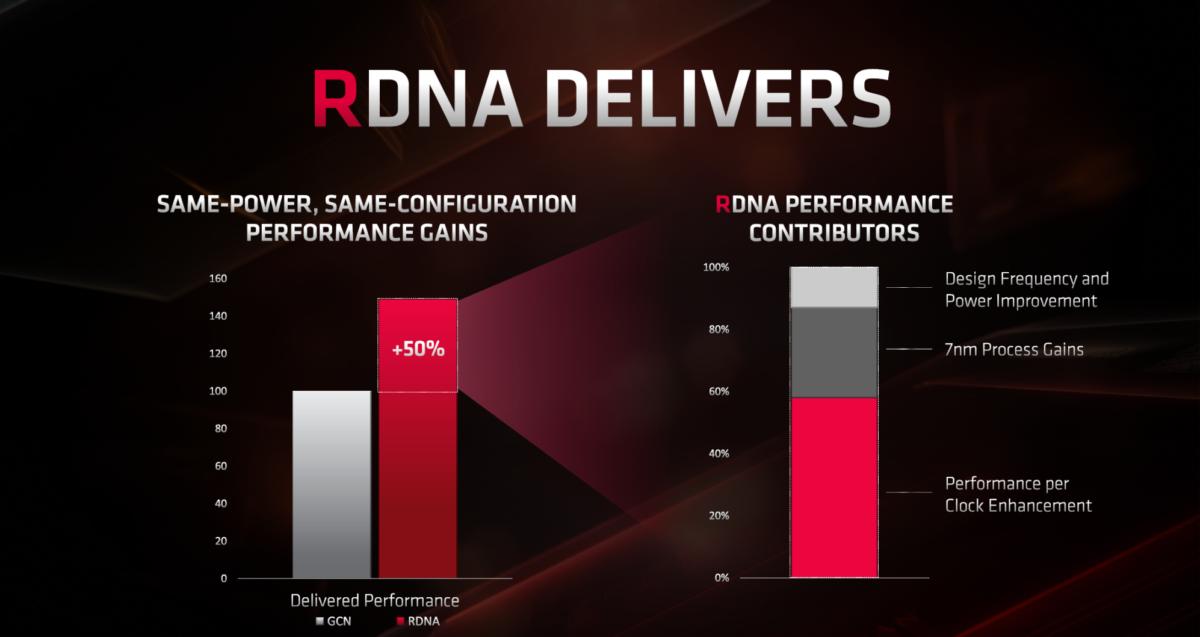 If you’re wondering what the clock speeds are, take a seat first.

The obvious stand-out spec is “game clock.” For that AMD said it is targeting “game clock” based on a list of popular games to maintain the clock speeds. Boost clock would be opportunistically hit based on the load the GPU is running at. When asked if this was just a cynical way to say “thermal throttle,” AMD responded that it’s more about targeting clock speeds that benefit games. In practical performance, most games will hang around at the game clock and only occasionally hit the boost clock. The base clock speed is unlikely to be triggered unless you’re running an extreme stress test. 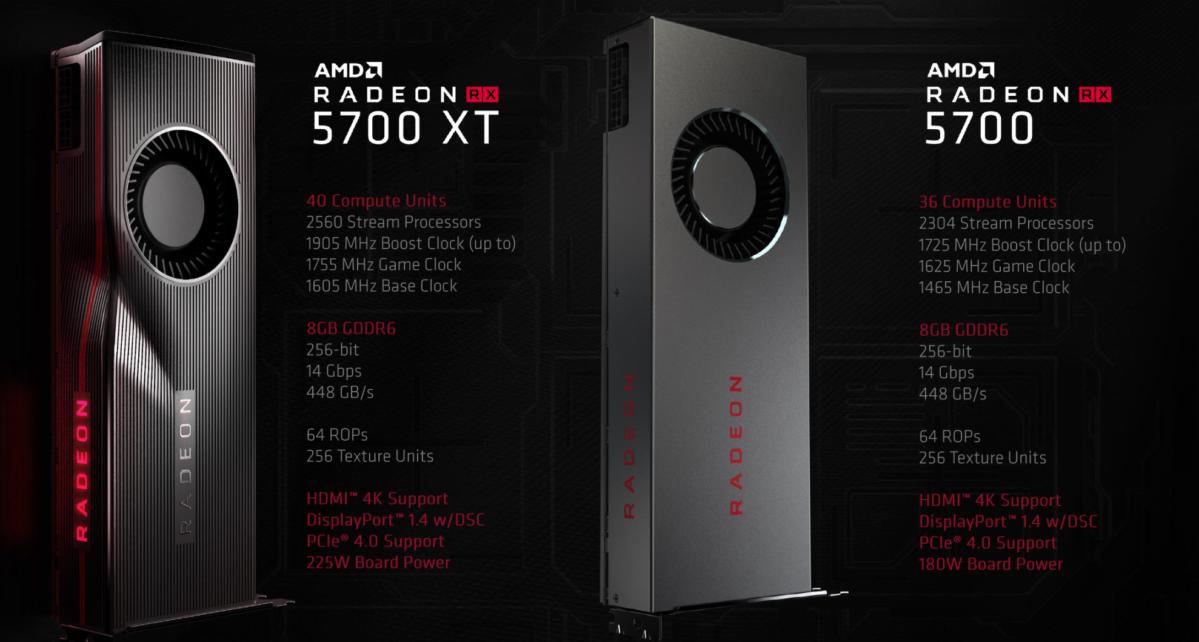 In the end, the only thing that matters is performance in games. AMD claims both cards can hold up against their Nvidia counterparts. 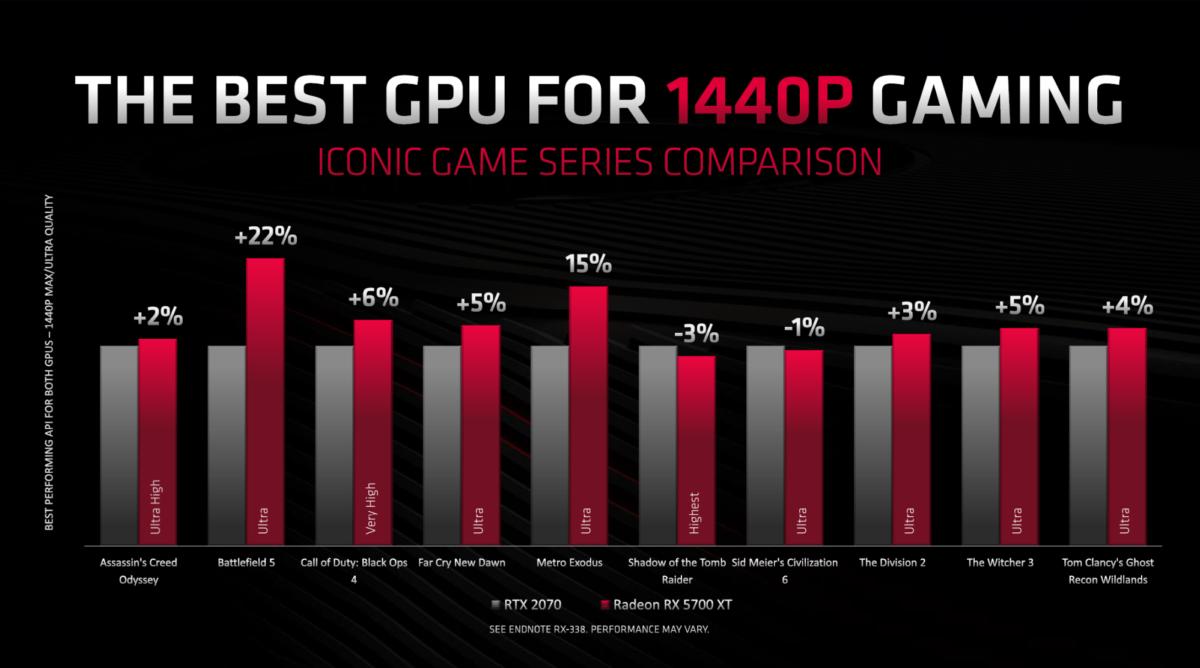 Likewise, the Radeon RX 5700 also matches up nicely against the GeForce RTX 2060, the company said. AMD again cited a lengthy list of game benchmarks to show it exceeding or matching the GeForce card. 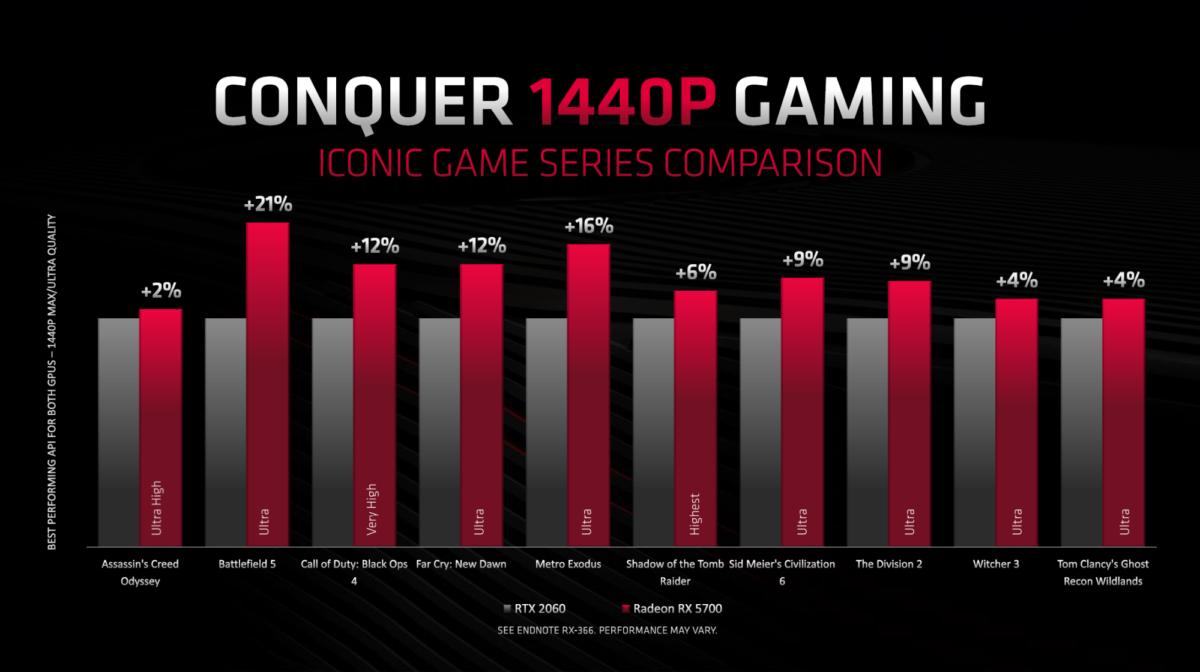 The GeForce RTX 2060 will see competition this summer from AMD’s Radeon RX 5700.

With ray tracing available on GeForce RTX, gamers have been wondering what AMD’s plans are for the technology. AMD officially said the path they see includes using the current GCN and RDNA cards to perform ray tracing using the card’s shader cores. When Next Gen RDNA (the company’s official name for its new graphics architecture) comes along, “select lighting effects for real time gaming” will be used.

To us, that sounds like a future RDNA will accelerate certain DXR techniques for lighting, similar to the way Nvidia’s GeForce RTX mixes conventional rasterized rendering and ray tracing. 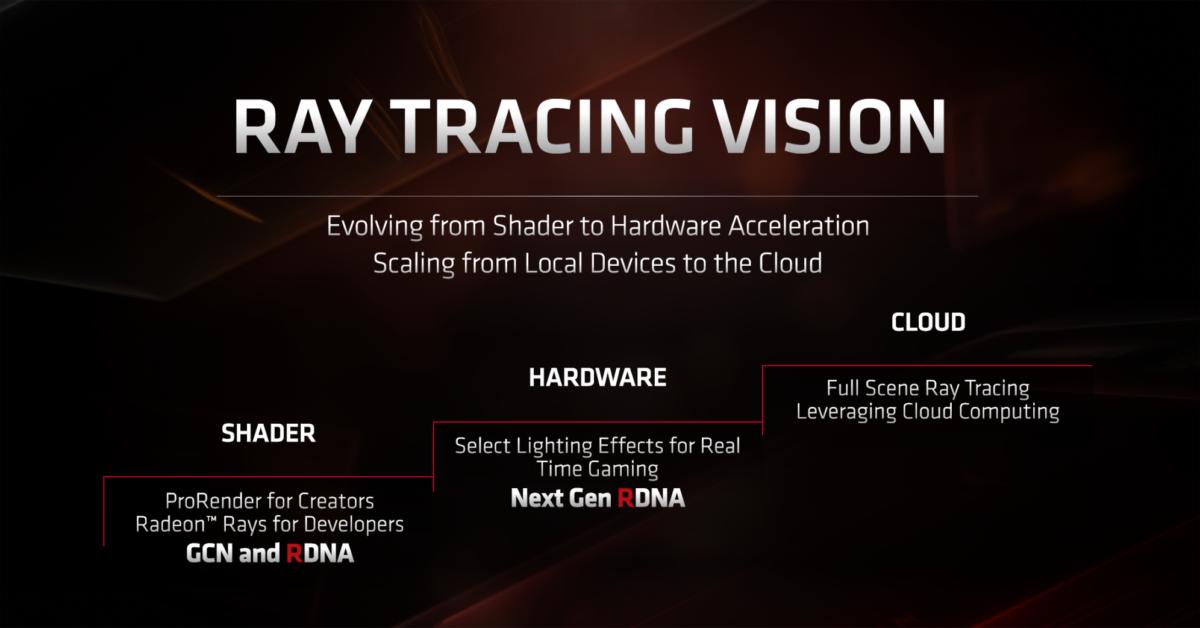 Ray tracing will come (one day).

For the physical cards themselves, AMD said it’s heard the longstanding complaints with the company’s reference blower-style cards, and it designed the new Radeons to be quieter. The 7nm process the GPU’s built on probably helps, too. AMD said it opted for a blower-style design because it believes most PC gamers have decently cooled PCs to begin with 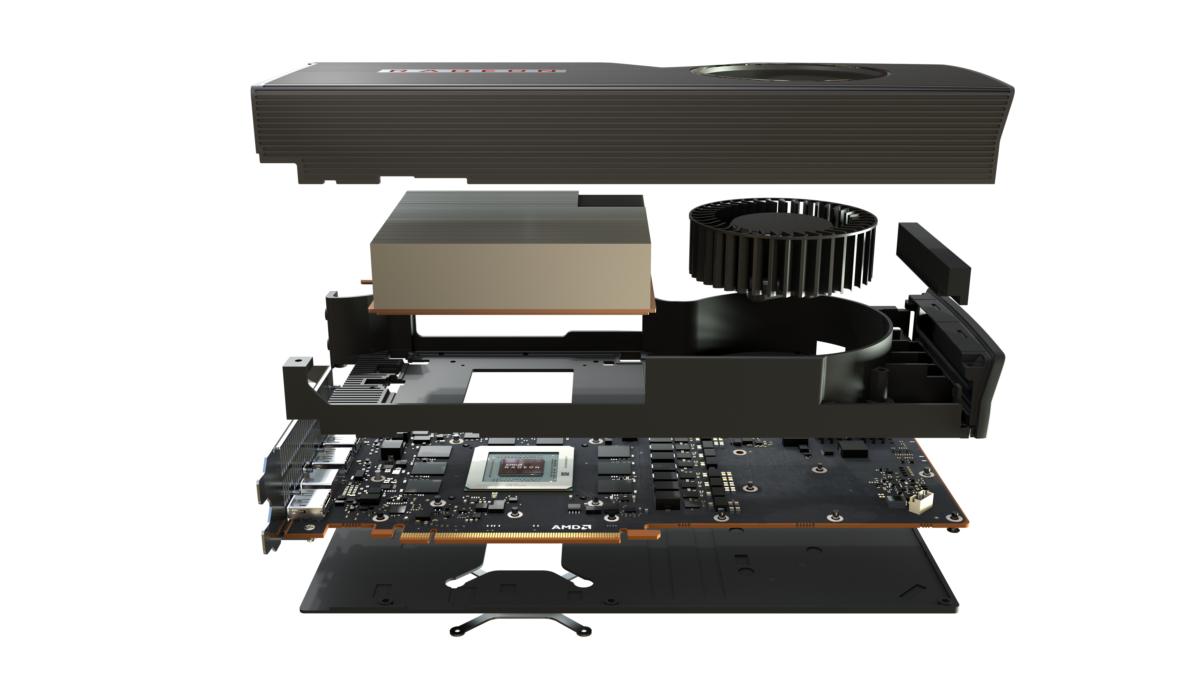 Initial cards will be blower-style, but add-in board vendors are expected to create their own beefy versions.

Besides the new hardware, AMD also rolled out a spate of new visual quality tricks. Radeon Image Sharpening (RIS), for instance, performs real-time sharpening. It applies the sharpening only to areas of low contrast that can show improvement from RIS. 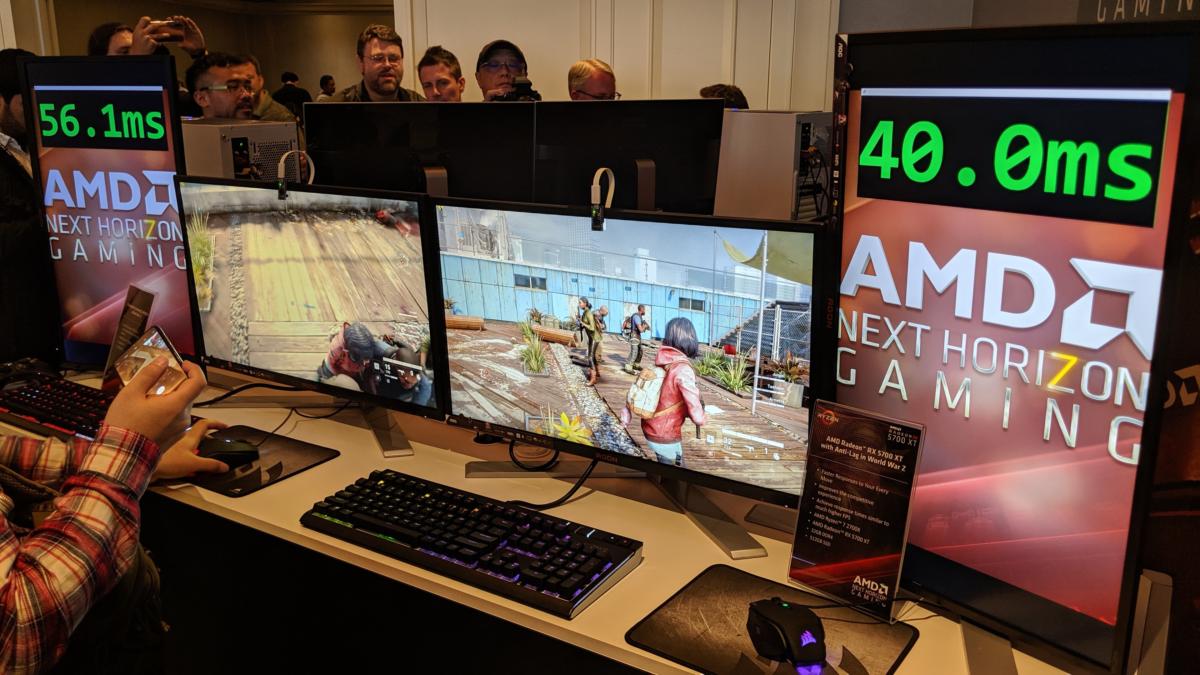 AMD’s new Anti-Lag feature can significantly reduce the “lag” between when you click your keyboard and mouse and when you see the action on your monitor.

While AMD showed many new software tricks, its Anti-Lag might have been the niftiest. The technology promises to reduce input lag by up to 30 percent in some games.

AMD officials said lag can often occur in situations where the CPU is waiting for the GPU to finish drawing frames. With Anti-Lag, AMD said it’s figured out a way to tell the CPU to take a pause and essentially wait for the GPU to catch up.