Dental robotics startup Neocis today closed a $70 million round of funding. The company plans to use the capital to bolster growth with a particular focus on expanding its customer base and hiring new employees.

Surgical robots have been used in an estimated over 6 million cardiovascular, neurological, and orthopedic procedures since 2000, depending on how generously one applies the word “robot.” But they’ve taken longer to reach dentistry, perhaps because the mouth is more accessible and visible than other parts of the body. Another factor is a lack of clinical evidence suggesting that robots significantly improve outcomes compared with traditional methods.

This being the case, Neocis is forging ahead with Yomi, which the company claims is the first dental surgery robot to receive clearance from the U.S. Food and Drug Administration (FDA). The FDA’s clearance process, also referred to as the 510(k) process, gives clearance for medical devices to be marketed if the manufacturer is able to show that the device is “substantially equivalent” to another cleared device. Unlike FDA-approved devices, FDA-cleared devices don’t require that extensive preclinical or clinical data be submitted to the FDA.

Neocis received FDA clearance for Yomi in 2016 and began its commercial efforts at the start of 2018.

Yomi, which features a robotic arm that extends outward from a moveable base, has haptic guidance that allows dentists to previsualize a number of different procedures (for example, flapless implants). Surgeons remain in control and in contact with both instruments and patients; Neocis says it can prevent drill deviation or over-drilling past depths to avoid anatomy like nerves and sinus cavities even if the patient moves. 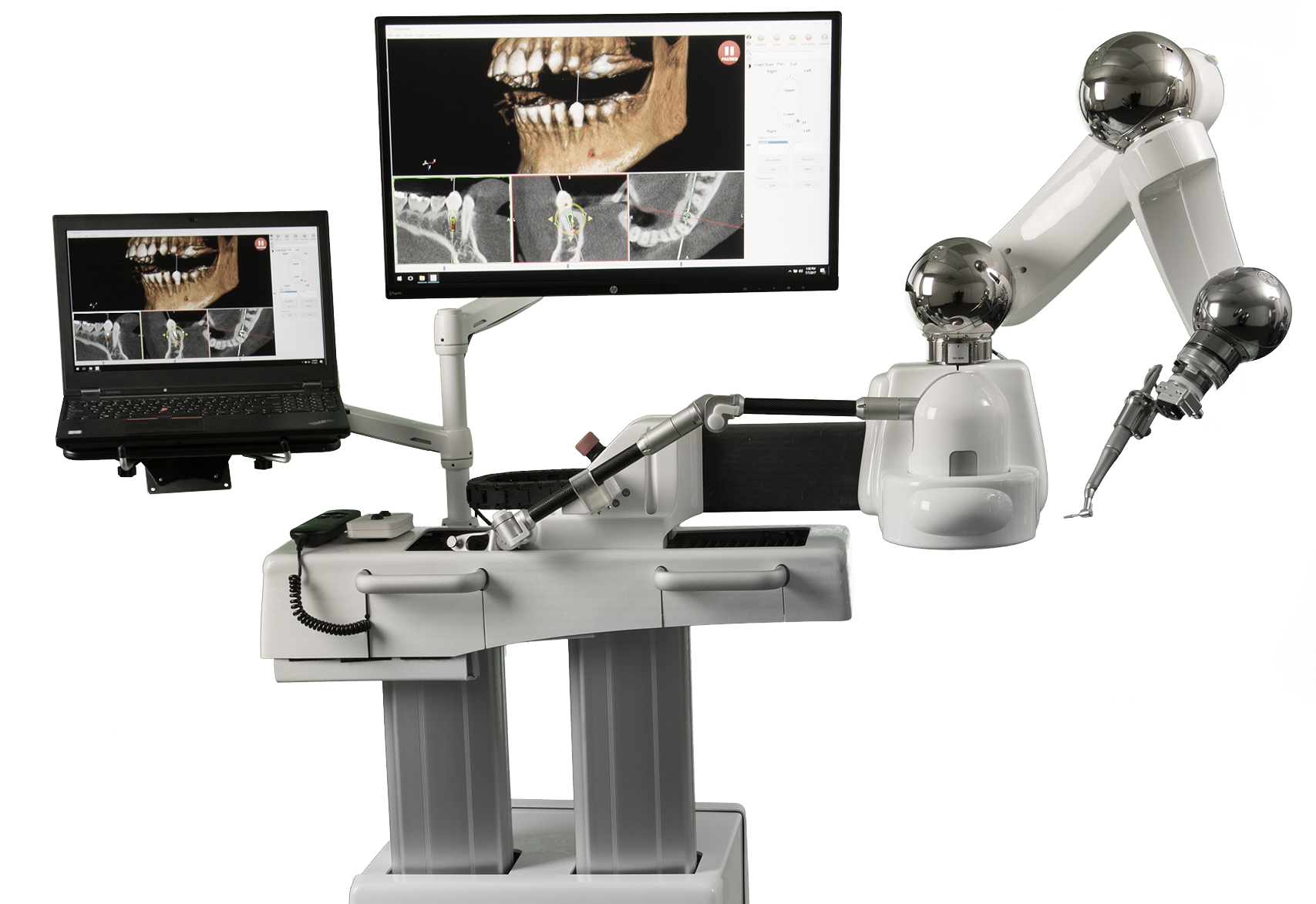 Yomi is designed to assist with procedural planning courtesy of software that shows a rendering of patients’ teeth. Surgeons are free to adjust the surgical plan intraoperatively, and the platform enables the use of third-party implants like splint attachments and scanners to perform surgeries in as little as 90 minutes.

While Yomi doesn’t act fully autonomously, it physically resists motion outside the bounds of the plan. A display shows the surgeons where they are and their progress at all times.

“The Yomi planning software … leverages AI techniques to guide the surgeon in planning the case safely, for example providing warnings about proximity to the nerve or sinus and displaying information about the bone density quality in the proposed implant location,” a Neocis spokesperson told VentureBeat via email. “Moreover, since dental practices already enter the patient information, upload patient scans, plan the procedure, and perform the surgery with Yomi, this recorded data adds a long term opportunity to use machine learning to enable the surgeon to streamline their clinical workflow and optimize the plan for the surgical procedure.”

Neocis claims that over 2,700 procedures have been performed using Yomi in 50 cities across the U.S., and the company has been traveling around the country with a “demo bus” to provide a safe way for dentists to see the robot. In fact, it’s Neocis’ assertion that Yomi can facilitate distancing during the pandemic. For instance, its screen-based navigation, reusable components, and disposable draping could allow for greater space between the faces of patients and providers during procedures while reducing the risk of cross-contamination.

“This round gives us an opportunity to substantially increase both our commercial efforts and our R&D,” Mozes, who previously worked at surgical robot startup Mako Surgical before starting Neocis with a former coworker, said in a statement. “It enables expanding the Yomi platform into new clinical indications for the full spectrum of general dentists and specialists, adding value for the Yomi platform in every dental practice.”

DFJ Growth led this series D round with participation from Vivo Capital and existing investors Mithril Capital Management, Norwest Venture Partners, Section 32, and Fred Moll. It brings Miami-based Neocis’ total raised to date to over $120 million, which Mozes expects will enable the company to double its 80-person workforce within another year.

The Inspirations, Relationships, And Story Of Marvel's Spider-Man: Miles Morales