Driverless vehicle technology has the potential to transform industries — and indeed, it already has. Stockholm, Sweden-based Einride has raised over $32 million for freight systems that transport logs, shipping containers, and other cargo autonomously. For its part, Alphabet’s Waymo — a pack leader in the market segment — has deployed a commercial robo-taxi service in Phoenix, Arizona.

As for Outrider, previously Azevtec (Autonomous, Zero-Emission Vehicle Technologies), it hopes to do for yard trucks what Waymo did for ride-hailing and Einride did for trucking. The roughly 50-person company, which is headquartered in Golden, Colorado, was founded in 2017 with the goal of automating vehicle movement in freight hubs to reduce costs while improving safety. Today it emerged from stealth with $53 million in seed and series a rounds led by NEA and 8VC, respectively, to see its vision through, and revealed that it’s conducting pilot tests with four Fortune 200 companies and Georgia-Pacific, one of the world’s largest manufacturers and distributors of tissue, pulp, paper, and more.

“Logistics yards offer a well-defined environment and a set of discrete, repetitive tasks that make the ideal use case for autonomous technology. But today’s yards are also complex, often chaotic environments, with many manual tasks. This is why a systems approach is necessary to automate every major task in the yard,” said founder and CEO Andrew Smith. “Modern distribution yards aren’t just autonomous, they are electric. Electric yard trucks are easier to operate and maintain than their diesel counterparts. Our mission is to work with customers and suppliers to rapidly retire the more than 50,000 diesel-polluting yard trucks currently operating at logistics hubs throughout the US.” 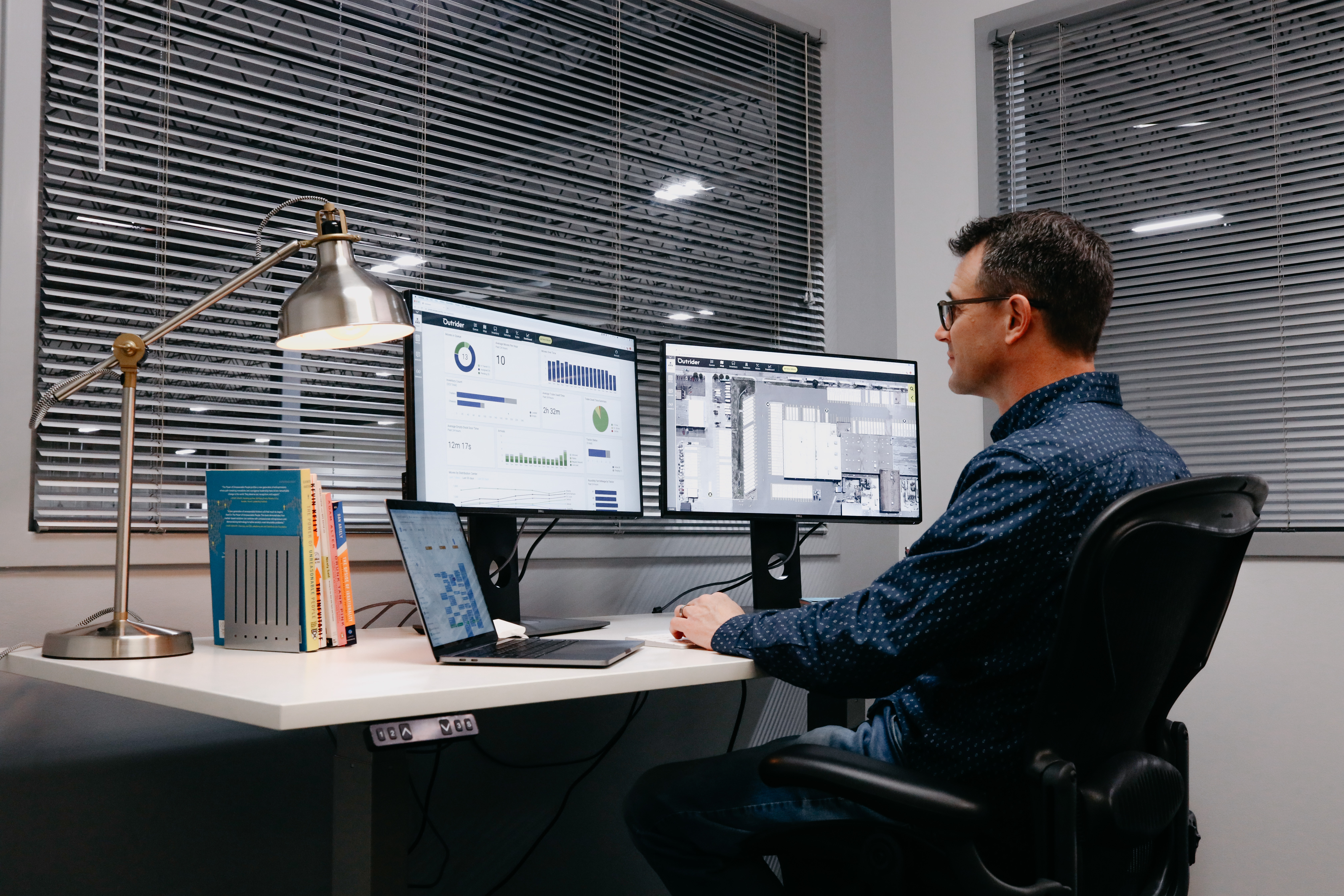 Outrider doesn’t own or operate vehicles itself — instead, it provides a software-as-a-service (SaaS) solution for customer-owned fully and semi-autonomous freight and transportation fleets, as well as a team of technicians to monitor those fleets’ progress remotely. Its stack handles autonomous distribution yard operations at logistics hubs, namely rail yard maintenance and basic port terminal operations. Commonly, this entails moving trailers around the yard, moving trailers to and from loading docks, hitching and unhitching trailers, connecting and disconnecting trailer brake lines, and monitoring trailer locations.

Outrider claims the computer vision-based vehicles orchestrated by its software — which are capable of up to level 4 automated driving, a mode the Society of Automotive Engineers defines as fully self-driving in most conditions — exceed not only efficiency and safety standards but stringent environmental standards, as well. The details are a bit vague, but Outrider says its three-way system, which includes a management engine and the aforementioned yard trucks and site infrastructure, works with much of the existing supply chain software used by large enterprises.

Outrider is tackling a market that’s practically unrivaled in terms of shipment volume. In 2013, the value of goods transported as freight cargo was estimated to be about $50 billion each day in the U.S. alone. The driverless truck market is anticipated to reach 6,700 units globally after totaling $54.23 billion in 2019 and stands to save the logistics and shipping industry $70 billion annually while boosting productivity by 30%.

Besides cost savings, the growth is driven in part by a shortage of human drivers. In 2018, the American Trucking Associates estimated that 50,000 more truckers were needed to close the gap in the U.S., even despite the sidelining of proposed U.S. Transportation Department screenings for sleep apnea.

That said, Outrider has formidable rivals in TuSimple, Xos (previously Thor Trucks), Pronto.ai, and Aurora, the last of which in February 2019 attracted a $530 million investment at a valuation over $2 billion. There’s also Ike, a self-driving truck startup founded by former Apple, Google, and Uber Advanced Technologies Group engineers, and Kodiak Robotics, which is the brainchild of Paz Eshel and former Uber and Otto engineer Don Burnette. That’s not to mention Embark — which integrates its driverless systems into semis and launched a pilot with Amazon to haul cargo — or autonomous truck solutions from incumbents like Daimler and Volvo.

But Outrider is betting its holistic solution — and its team of over 75 employees, 50 of which are engineers hailing from Nvidia, Tesla, iRobot, Lockheed Martin, GM’s Cruise Automation, the U.S. Armed Forces, Carnegie Mellon, Georgia Tech, Purdue, Princeton, Johns Hopkins, and Northwestern — will set it apart from the pack.

“Outrider is introducing the transformational technology required for large, logistics-dependent enterprises to keep pace,” said 8VC founding partner Jake Medwell. “We consider hundreds of investment opportunities in the logistics space every year. Our decision to be an early investor in Outrider was an easy one.  Andrew’s vision and plan for the industry are highly compelling and he’s mobilized an unmatched team to execute.”